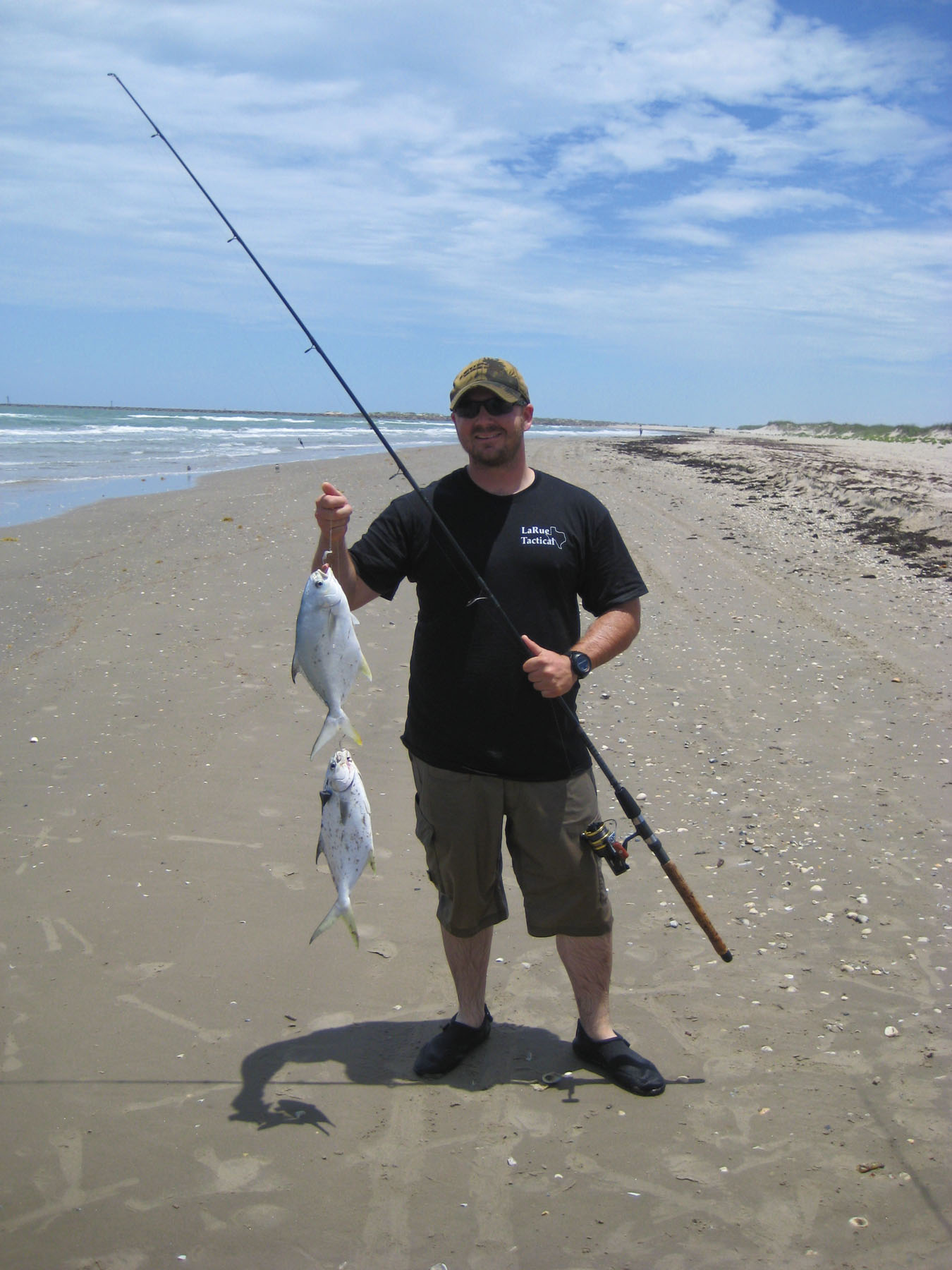 U. S. Army Staff Sergeant Adam Wilson on leave from third tour in Iraq; he can fish as well as fight.
I have always told everyone that all good things come from the sea in June. The fact is that I was born in June and that is the main reason I say that, but it is undeniable that June has stood out as one of our top three months for surf fishing all of my life. In my youth June was our best month for tarpon and for the past twenty-something years it has been our most productive month for big bull sharks and, in general, one of the best months for all shark species. Then came several years of excessive sargassum that didn't allow for quality shark fishing in June and I sorely mourned the loss. Then last year there was little sargassum and we could fish but the sharks simply weren't there in the numbers of past years. This June the Sargassum has been tough but has still allowed for shark fishing, but once again the numbers of sharks is unusually low.

The number of other fish species being caught is down as well; except for Atlantic pompano. Pompano usually are caught more frequently here during the colder winter months and this added to the puzzle. Last year Memorial Day produced good numbers of speckled trout in the surf and as of late June this year they are hard to come by.

I did however notice a return of the cold water upwellings in early June that I often write about. Then I checked the water temperature charts for the Gulf of Mexico and the problem stared boldly back at me. Extending from down south in Mexico to around the 15-mile beach front of PINS, there is a distinctive drop in water temperature. To check this yourself go on line to Tyler Thorsen's site; www.corpusfishing.com. In the left margin are a series of links. One says, "Local & Marine Weather & Tides & Gulf of Mexico water temperature maps." Click on this link and then on the one for water temperatures and you'll clearly see what's going on. Not why; but what.

But it's not as simple as that. The currents have always came in from time to time and I used to seek them out intentionally as large numbers of plankton feeders were present in the immediate areas of the upwellings and time after time they proved excellent locations for tarpon and large sharks. This is no longer the case and I can't figure out why. Is it because the upwellings are more frequent now than in the past or is the water temperature less than in years past. I'm told sharks, king mackerel, ling and jack crevalle are readily available two miles offshore while things are really slow on the beach even though large shoals of menhaden and other bait fish are seen daily. Things change and that's natural and it's fun to try to figure it all out but this current status continues to elude me and I'll be glad to see things back on schedule. I always say Mother Ocean always turns on sooner or later but she does it on her time schedule and not the schedule of man. I'll be glad when she does.

Rumors of tar washing in on PINS are being reported and I just want to clarify that it is not oil from the Deepwater Horizon oil spill. We get oil in varying degrees on PINS during the summer months and have done so all my life. I've been down island a lot lately and that is all I am seeing. Much of it is natural seepage and when studying the Karankawa Indians it mentions they used it to waterproof their pottery. If we see oil from the Deepwater Horizon spill I would look for it during the winter when that western arm of the loop current pushes water and debris down the Texas shoreline; not during the summer when our current is coming from the south.

As of 25 June, 2010, one hundred and thirty five Kemps ridley sea turtle nests have been found along the Texas coast along with four loggerhead nests. That's down from last year's record 198 nests but steep increases in numbers cannot be expected every year. It's got to level out sooner or later.

I had some real nice fellas on a shark charter last week and the sargassum was so bad it forced us down near the Port Mansfield jetties. Beautiful baits in perfect conditions with shoals of menhaden moving back and forth through the area and we couldn't buy a strike. I stayed till 6:00 pm even though we were fifty nine miles down island and then after loading everything on the truck for the return trip to town the truck wouldn't start. I crawled under the suburban to check the ground wire to the starter and the starter housing broke in my hands. I knew right off we were going to be late for supper.

I climbed a dune and called Brother Mike McBride at Port Mansfield and he stopped prepping for his next day charter, drove to Raymondville, bought me a starter, drove back to Mansfield and got in his boat and delivered it to me at the jetty. I walked down the beach to meet him.
My customers were in awe and said, "Billy when you can get a new starter delivered sixty miles down an isolated beach in one and a half hours you've got it figured out and you've got some mighty fine friends."

I never looked up but said, "It ain't about friends. Friends ain't got nothin' to do with it. It' about family and Mike and me are family."

Once we got the truck running I went back up on the dune and called my wife and told her to call Rocky at Roy's Bait & Outfitters and let him know we were going to make it in on our own. Rocky had volunteered to come down after work and get us if we couldn't get the truck running even though he had worked all day and had to be at work early the following day.

Somewhere back around Vietnam I realized that in life one runs into people that he ends up being as close to or closer to than he is to his blood kin and that actually an individual isn't stuck with the gene pool family he's born into. An individual can choose his own family as he goes along. I am so very proud of mine. They are the genuine pay off of sixty-three years of living; not pictures of big fish I've caught nor conservation awards and plaques on the wall or money in the bank.

Friends tend to be available when it's convenient for them. Family puts their lives on hold to get you out of a jam. How wonderful to have people like that in my life. I hope you have them in yours. Life's a hoot. Go get some of it.

If we don't leave any there won't be any. - Capt. Billy L. Sandifer