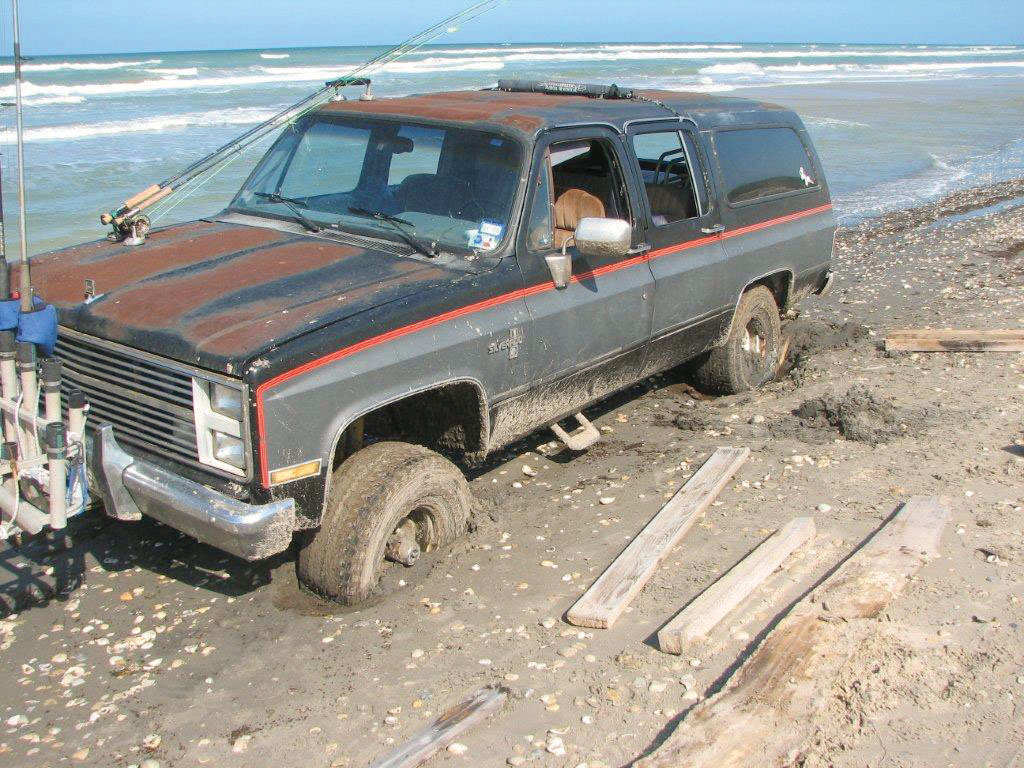 On the table in front of me stands no fewer than twenty-seven customer inquiries stacked in a neat pile. There are more in my e-mail. It's been that way all year. Business remained brisk through December for the first time in years. Then I blew the engine in my Suburban on 27 December and the phone kept ringing but I was unable to do the charters till I found a replacement. Finally found a replacement engine only to have it blow up after only one charter and had to rebuild it. Finally the truck was repaired and it should have been back to business as usual but the sargassum weed had showed up in very heavy amounts all along the entire Texas coast putting the kibosh on fishing the beach right up through today's date. I drive the beach all the way to the Port Mansfield once per week to see if there are any stretches where the grass has diminished but week after week there has been no change except that the fuel bill per trip has risen to $100.

The one good thing about having fished down-island for 50 years is that I know this too shall pass. We never know exactly when as each year is different but we'll wake up some mornin' and the winds will have moderated and fresh grass will not be impacting the shoreline. It will be just another memory and driving will improve, fish and birds will be seen working the surface and reels will scream and rods will bend double. Each year we think is the worse ever but in fact this is a part of the annual cycle of life in the surf zone. I will, however, admit that this is the only time I've only had one charter in four months. That means I have eight months to make a year's wages and if the Creator is willing it will get awful busy around here.

I've noticed a very interesting thing while on these weekly scouting trips. Nothing I haven't known for many years but many of you probably have never considered or realized it and should find it interesting. Sharks and most other fish feed by three methods; sight, smell and vibration. Year after year I've watched fish that were readily caught from Monday through midday Friday disappear completely, or as we say "they get lock jaw." Catching will be slow from noon Friday till at least late Sunday. Why? Because the vibration of all the weekend four-wheel-drives traveling on the beach overwhelms the fish's senses of vibration. They recognize it as unnatural and they move offshore to escape it. The calmer the seas, wind, and waves; the easier it is to spook them. Take a minute and think about it; all those vehicles fighting to make headway in the sand has got to sound like an endless caravan of "Boom Boxes" to the fish. Not all fish species are affected in this manner but many of our target species are.

On two of the last three scout trips down PINS I saw but one truck on two of the days and none on the third day. One those days I saw two bull sharks of about five to five-and-a-half feet and one smaller blacktip working within fifteen feet of the shore in less than two feet of water. On another day I found two bull sharks of approximately seven feet length and four foot blacktips in various locations within ten feet of the shore.

I have enjoyed sight-casting to sharks from the beach for many years. The first trick is don't slam your truck door. In calm conditions I've seen blacktips of six foot-plus length cruising in less than two feet of water go totally ballistic and jump a half dozen times on their way to the horizon because someone slammed a door. And as with any type sight-casting it is imperative not to cast too close to the fish. Cast ahead of the fish and let it find the bait naturally; on his own. During the summer and fall months we sight-cast trout and redfish which we spot while driving along the beach. Extreme stealth is required and I emphasis to all customers that the first cast needs to be perfect and they need to wait till they know it is right. One bad cast will insure you don't get a second chance.

I used to get so tickled when I would read Cliff Webb's articles about sneaking up on big trout on his knees because we have been doing that on the beach for many years. I always kind of figured most folks who read Cliff's stuff thought he was shoveling it on a bit thick. He wasn't. These scenarios mentioned above are only practiced by a handful of accomplished anglers on PINS. The biggest enemy of finding success while fishing in this manner is speeding. If you are driving too fast you will spook the fish before you have any opportunity to try for them. Just hit the brakes hard while going 40 mph and watch those fish instantly flee in high gear. PINS is such a rare and wonderful place it's sad when a few who know nothing or little ruin the day for many others.

As much weed as has stacked at the water's edge for such a lengthy period of time should be a stern warning that we are going to have to be extra careful when driving "out front" at the water's edge. Decomposing sargassum will become covered with fresh sand and soft areas of quicksand or "oatmeal" as it is called will instantly cause your vehicle to sink to the frame and trust me there is no fun in digging out of this stuff. It has the consistency of oatmeal and is almost impossible to shovel out of and actually I have found it easier to dig out with my bare hands or a can than a shovel. I'm poor so somehow I always manage to dig out of it although it is a hateful task. I think it was four years ago that fourteen vehicles were totaled out on PINS due to the owners not being able to get out of these sink holes. When stuck badly one must remember that your front and rear differentials are as buried as your tires are and they have to be cleared as well. Most long term beach goers use high-lift jacks to raise their vehicle up one wheel at a time. The jack requires a substantial piece of wood under, otherwise it will simply disappear into the sand. Dig down and put wood under your wheels and in front of them as far as possible, let the jack down, put it in four-wheel low and give it your best shot. Don't spin your tires excessively if your first attempt is unsuccessful, it only makes the second attempt that much harder.

The first Kemp's ridley sea turtle nesting activity of the season was discovered on April 8, 2011 which is a bit early. As of April 25 eighteen nests have been found on the Texas coast, twelve on PINS. Historically speaking early nesters tend to nest high on the beach and then as the season continues the later nesters will be found closer to the water. That is not happening this year. Perhaps the drought has the sand too dry on the higher beach for nesting but at any rate they are nesting down closer to the water and even in the road. Please take a good look at the photo of a nest found at the 10-Mile yesterday that accompanies this article. Smack dab in the middle of the road and very, very hard to see. Sounds like a plan; drive slow enough to see sharks and other fish as you travel the beach, everyone but the driver and maybe one helper look for fish while the driver and his helper watch where they are driving and keep an eye out for turtles, coyotes, little people and all of the Creator's other children. Can't wait till things get right down there; it'll surely be a hoot.

"If we don't leave any there won't be any." -Billy Sandifer