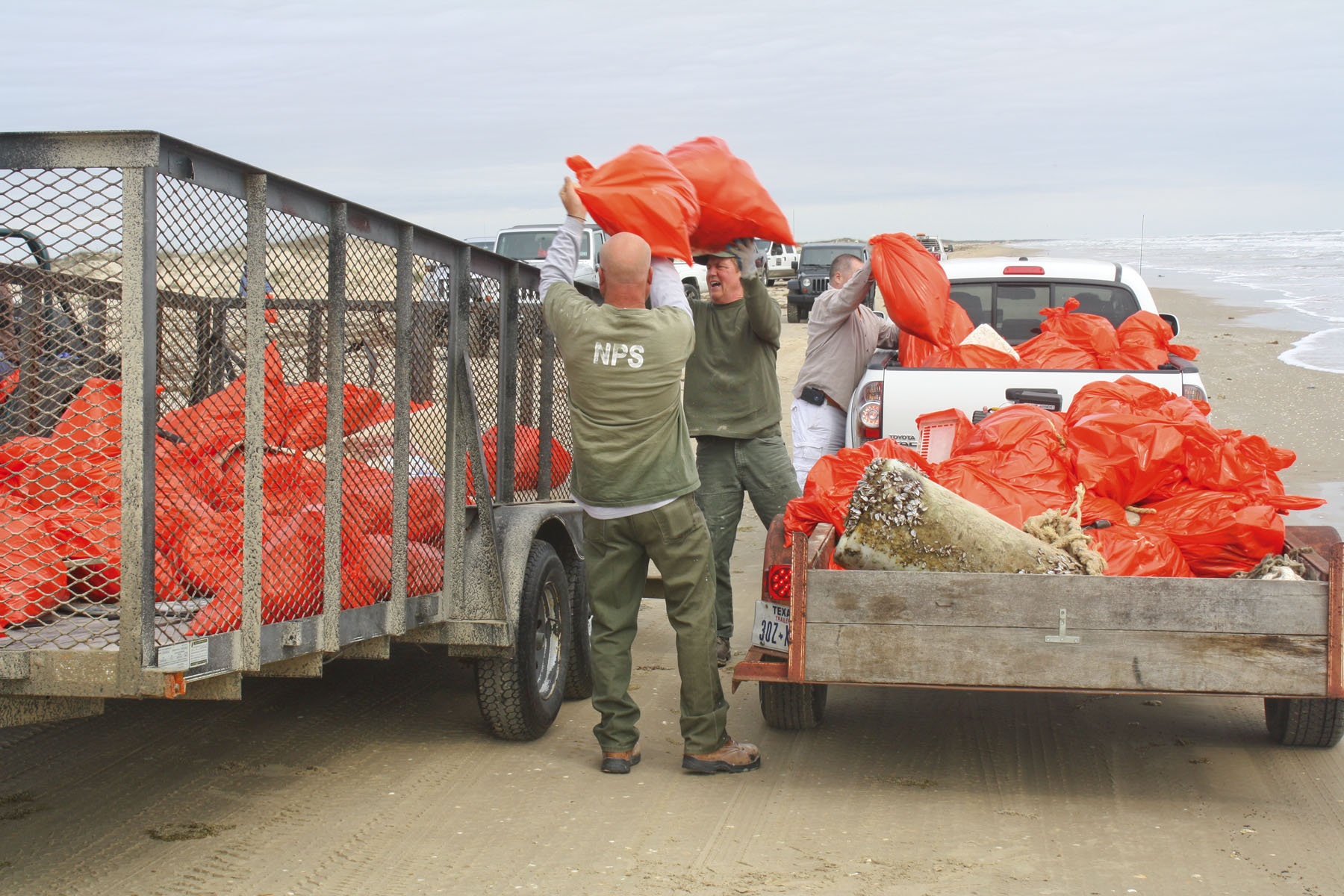 Over the years it has become my habit during the drive back up to Malaquite Pavilion following the Big Shell Beach Cleanup to mentally critique the day's activities and catalog any and all problems that might need worked out before the next event. Something was troubling me on this ride but I couldn't put my finger on it.

We arrived back at Malaquite at 2:00 PM, first time in eighteen Big Shell Cleanups we were on time instead of two or three hours late, which is normal for me. As I visited with a dear friend at the refreshment area the nagging feeling of uneasiness continued and I felt that something was definitely out of place. The event itself had gone extremely smoothly with few troubling issues. The Friends of Padre and their cleanup committee had thoroughly and meticulously planned each aspect of the event from beginning to end. Then someone casually mentioned that the cleanup turned eighteen today and instantly it came to me.

The Big Shell Beach Cleanup had reached adulthood and she and the Friends of Padre didn't really need me anymore. Friends of Padre Inc, as an organization, was now well trained and capable of planning and carrying out the event without me.

This was the long-awaited goal; as I got older and my health got worse, to put together and train a younger group to carry out the event as well as to deal with situations affecting Padre Island as they arise. However, I hadn't prepared myself mentally for this long-awaited day.

David Sikes, our Caller-Times outdoor writer, asked me on the way back to Malaquite how and why I had started the Big Shell Beach Cleanup and I guess that is what led to me being in this mood. I don't and never have dwelled on good deeds done but tend to concentrate on how to make them better next time. As I told him the how and why of the beginning of the event it all came flooding back to me and the memories were overwhelming.

The trash has always been there. Shark fishermen used to keep a fire burning 24 hours a day in their camps to clear off as much of it as possible. People would ask how I could work surrounded by trash all the time and my answer never changed, and that is by insuring none of the trash is mine or anyone else's I take down there. But there was one couple from Arkansas that haunted my memories for years.

They were affluent, owning several resorts in Arkansas that their adult children ran for them. Their plans were to open up one or two travel trailer parks in our area. When they booked me by telephone they said they wanted to evaluate the local area and community by going down island with me. I advised them that there was a whole lot more to the community and the area than they'd see on a trip into the 4-wheel-drive area of PINS.

Their answer was interesting. They replied that every town was just another town and certainly any local business organization would insure prospective investors saw lots of positive aspects of the community and that was exactly what they didn't want. They were outdoor oriented and would be spending a lot of time on the seashore. Their interest was in the overall quality of the outdoors locally.

When I picked them up they were literally bubbling with enthusiasm. The possibility of several trips to the area during the upcoming summer months were discussed as we reached the 4-wheel-drive sign. But by the time we reached the 25-mile marker the conversation could not be steered away from one subject trash on the beach. My long practiced explanation about the convergence of currents in the Western Gulf and how trash originated offshore and from Mexico fell upon deaf ears. Their concern was not from where the trash came, but the fact that it was allowed to accumulate and remain. Their concern was that the local community was blessed with such a wondrous place and most certainly profited greatly financially from its visitors, yet felt no obligation for the beach's well being and took no pride in its appearance. They stuck to their opinion throughout the day and never returned, leaving behind only their troubling memory.

In January of 1995 I got permission from National Park Service-Padre Island National Seashore to start a grassroots all-volunteer cleanup effort in the Big Shell area of the beach where the trash was the worst. Once permission was received and armed with nothing but determination, I beat on every door I could think of and called every phone number anyone would give me seeking support and advice on how to organize and carry out such a cleanup.

Island House Condos and Strickland Reality were the only island businesses I could find who would support the effort. Russ Tracey and Island House had event t-shirts made up and we sold the shirts to the volunteers to reimburse Island House and rent dumpsters to put the trash in. A far cry from this year when we bought and handed out over $4,000 worth of event t-shirts and NPS-PINS furnished the dumpsters.

The National Seashore administration assigned Kristy Bosworth as a co-coordinator for the event and I blackmailed our local outdoor writer, Buddy Gough at the time, to not only give us some good coverage but also to become very active in attempting to gain support. I depended heavily on friends who were long-term beach fishermen to work as section leaders and on October 29, 1995 300 volunteers covered 11 miles and picked up 50 tons of trash. We were starting something previously unheard of and had to wing a lot of it and learn in the field by trial and error. We still are, but now it's more fine-tuning various aspects.

The most important lesson I have learned from the cleanups is that it takes everybody. It takes all of us that care about and are concerned for this natural treasure that we have been blessed with. Those concerned with how visitors see us as a community and those concerned with the quality of life locally. I strongly urge everyone to support our resources and Friends of Padre Inc., which is currently doing everything possible to maintain the quality of the natural world that is Padre Island.

A well-earned thank you to Todd Neahr, Rick Underbrink, Jay Gardner, Tyler Thorsen, Aaron Baxter, Gabe Goodman and Jeff Wolda is in order as well as to our trash hauling trouble-shooters, Mike and Scott McKinsey. To the public at large this is a one day event but, trust me, there are mountains of pre-event preparation that goes into making it happen. The efforts of Casey and the crew of trucks, trailer and ice chests full of bottled water from David Ainsworth Trucking are a blessing indeed. And the continued financial support of Mr. Leon McNinch of the Ruth Parr Sparks Foundation, Ms. Laura Hill and CH2MHill and Stephen and Donna Gregory are greatly appreciated.

To each of you 500 hardworking volunteers who put in a day's work on February 23 to remove 45 tons of trash from 10 miles of the Big Shell Beach - Thank You from the bottom of my heart. It couldn't happen without you and you remain my heroes.

Your Brother in the Sand,
Billy