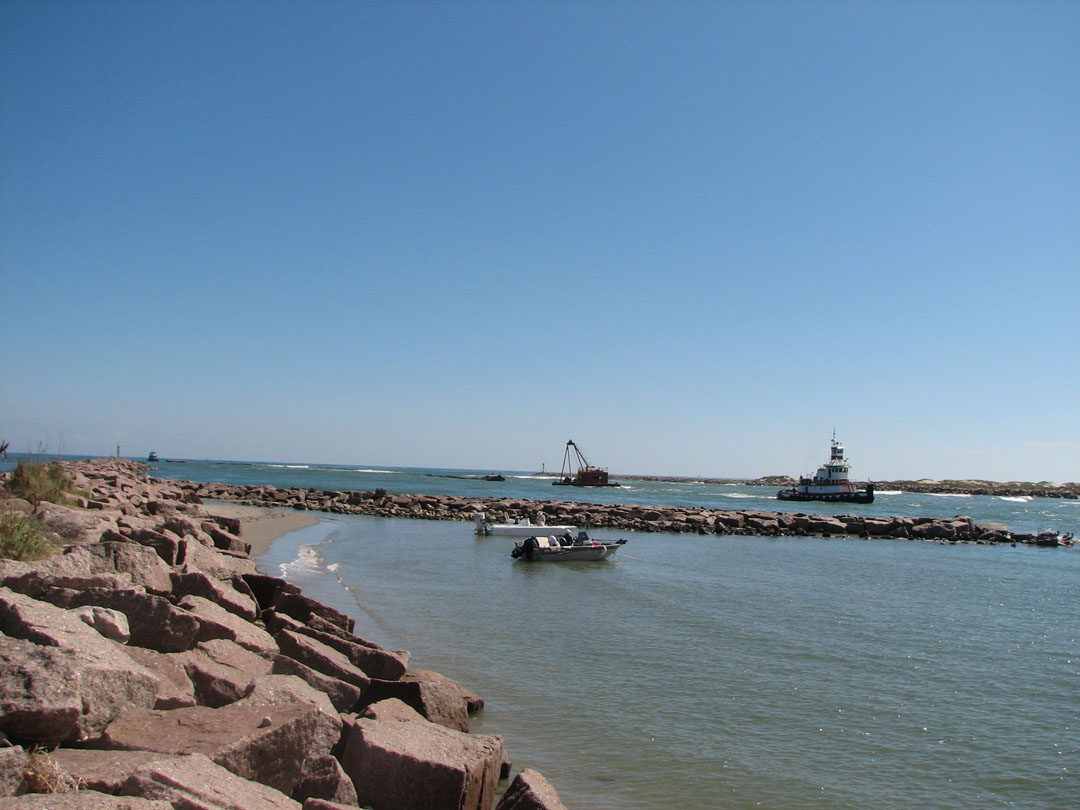 Dredging equipment arriving at the Port Mansfield jetties; 22 Oct 2008.
As I stand watching my customers, both of them fighting jack crevalle, I think what a tedious and harsh year it has been and I am grateful for this moment as it seems to have been a long time coming. Gene Titus and his future son-in-law ended the day with thirteen jacks from 16 to 21pounds and 3 reds; and then we fought our way along the beach in extremely high tides, far above the forecasted levels. I had to stop frequently to remove nail-studded lumber from our path that drifted in from the hurricane. That is the way of life in the surf zone; tough going, but a good day.

As I drive along I think of all the problems currently facing all of us and then suddenly then it hits me. After having been a chain smoker for 50 years, this marks 120 days without smoking. Pretty cool huh? It reminds me to be grateful and being grateful takes the place of worry and doubt concerning the future.

I notice that while the economy is effecting most aspects of our lives it sure isn't decreasing the number of people surf fishing as weekend crowds remain strong. There are two large fishing tournaments that impact PINS annually and both were held recently. I have compiled some data and am including some personal observations and then you choose what you would rather see as the future of these tournaments.

"Surf Cats" is based out of San Antonio and began in 1985 and until recently was held for the most part on PINS. The payouts to participants have never changed since 1985 and they have had as many as 600 participants. This year they chose not to pay the event fee required by the National Park Service, but rather told participants it was their choice where they fished as long as it was on or south of the Port Aransas jetties.

Citations were issued to Surf Cats participants fishing on PINS by NPS Rangers. Surf Cats overall has a bad track record concerning littering PINS. I contacted their organizers for years to see if I could interest them in participating in the annual Big Shell Beach Cleanup since they were the biggest user event. I received no positive results, although some individuals who fish Surf Cats have participated in the cleanup on their own. Surf Cats entry fees run $40-$60. They paid out $1,600 in cash and approximately $1,800 in prizes to six winners. They gave away T-shirts and door prizes. All tournament fish are killed.

Sharkathon was created with the concept of using digital photography and computers to design a catch and release tournament. The event began in 2004. This year they capped the number of contestants to 400 in order to minimize impact on the environment. The entry fee ranges from $40 to $160 depending the number of categories you enter. They paid $24,300 in cash and $7,700 in prizes to a total of sixteen winners. They paid $3,000 for a National Park Service permit to hold the event on PINS. They made a $1,000. donation to PINS and a $1,000 donation to the Friends of Padre. More on the Friends of Padre at a later date. They gave each participant a T-shirt. The grand total of $0 went to the organizers and they ended with $0 left in the bank. Good environmental track record; Sharkathon is highly supportive of conservation, catch and release, and the Big Shell Beach Cleanup plus efforts of their own during the event.

Which type tournament would you prefer to see in the future taking place in saltwater Texas? Think about these comparisons when evaluating other Texas tournaments. The days when kill tournaments were appropriate has long passed, every one knows it, and yet far too many remain. All it takes is a bit of reconstruction to make them just as much fun and good for the local economies without taking a deadly toll on species that may already be on the decline.

Unfortunately, many tournament fish end up in garbage cans when the event concludes. This is a blatant waste of valuable resources. Sharkathon was started with the goal of catch and release while targeting the most dangerous of fish species and I think they've been very successful in achieving it. I was booked during two days of the tournament and had no problems or complaints about the behaviors I observed nor did the tournament interfere with my being able to carry out successful charters.

To the contrary, I had trouble with my vehicle overheating on the way back north on Friday of the Sharkathon tournament. With participants giving me water to keep a leaking radiator from destroying my engine I managed to make it all the way to the 4-wheel drive sign. There, one of the organizers making a town run, carried my customers back to their hotel while another called a friend with a wrecker who towed me back to town. I got all the gear changed over to my other truck in the middle of the night and was able to make my next day's charter. None of these people owed me anything. It was looking out for the other guy and in essence the kindnesses shown me and my customers by Sharkathon participants and organizers is the embodiment of the attitude the "People of the Beach" have always had towards each other and it warmed my heart more than anything has in a long time. For tournaments to continue without being detested by the rank and file everyday angler they need to be well managed and have a strong conservation ethic. My choice is obviously already made.

The dredging equipment is for the most part in the Port Mansfield channel and the dredge is nearby offshore. Dredging operations should already be underway by the time this writing reaches you. Very probably, once the dredging starts and the dredged material is pumped onto the badly eroded beach north of the jetty, the water will become murky/muddy for some distance to the north. This will vary as per prevailing wind velocities and long shore current but it can muddy the waters of PINS for as much as 15 miles and has done so in the past. A small and short term price to pay for longer term gain.

Recently I weighed a Skipjack (ladyfish) for a young man named Jake Hornberger of Dallas who had spent the night down island with longtime surf fisherman, Capt. Frankie Echolz. It was 30" long with an amazing 10.25" girth and weighed in on certified scales later at 5 pounds 9 ounces. Old state record was 5.2 pounds so congratulations on a new state record fish Jake.

Yesterday I decided it was time for some maintenance on three of the Black and Gold Series 90 Spinning reels we use for jack crevalle, tarpon and other large gamefish. As I took them apart I realized it has been years since I had done so, or even greased the drag washers. One had caught 11 big jacks the day before and I wondered how many large bruiser gamefish each of these reels has landed with no maintenance. Gotta' be over 100 each. I replaced a total of two bearings and all three reels go back to work for a few more years in the morning. The BG Daiwa Spinning reels are absolutely the toughest workhorses made and come in sizes from light bay fishing through big game for less than $100. Not many bargains out there nowadays but these reels have got to be the exception. Have a very Merry Christmas and be grateful for what you have; I am.

Be careful, be courteous, be kind.
Capt. Billy L. Sandifer