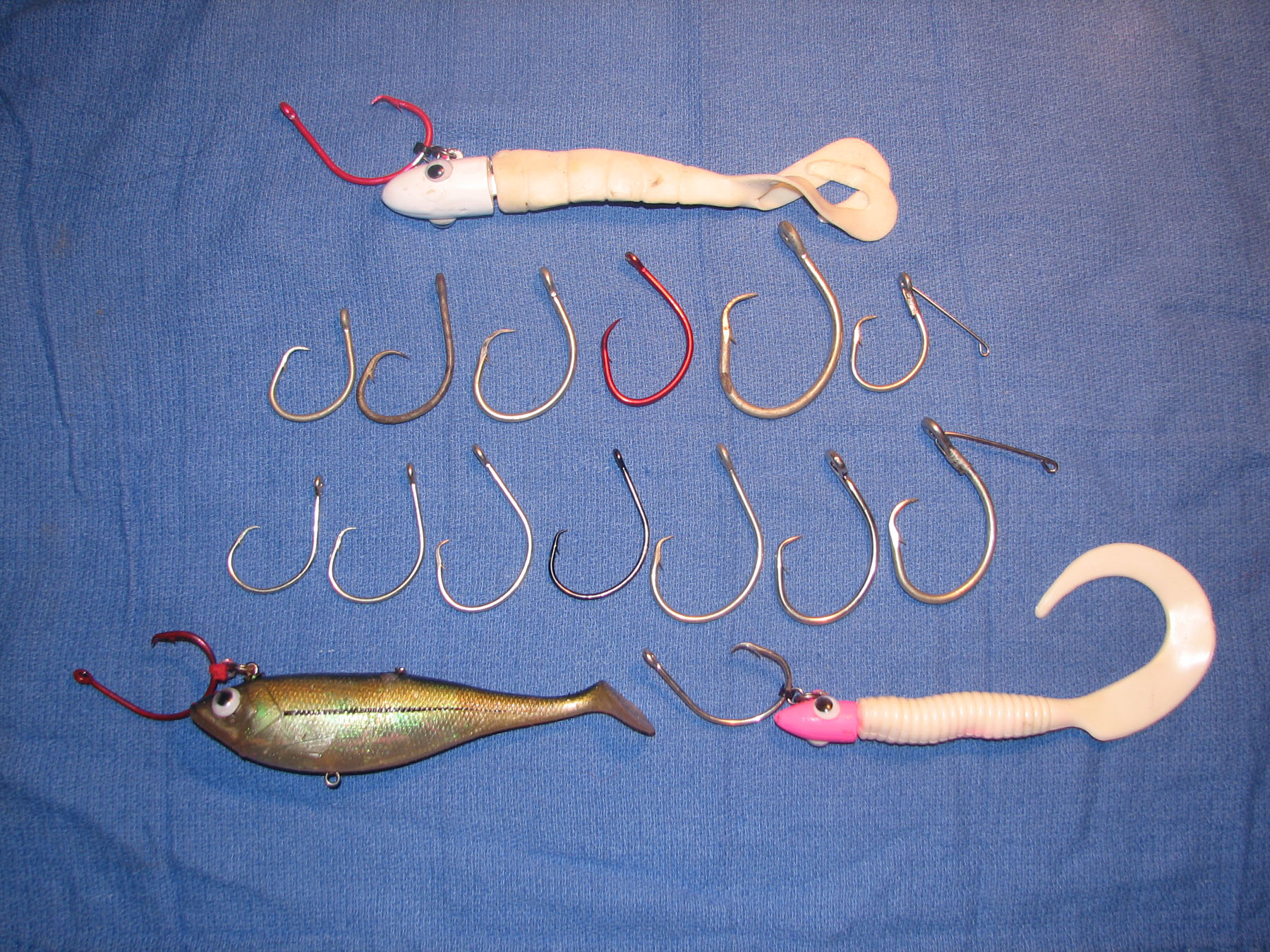 Assortment of circle hook and “Billy rigged” tarpon lures.
It amuses me how my fishing customers and even some experienced fishermen and guides react when I talk about circle hooks; they seem totally unaware of their existence and have little or no idea how to use them.

I mention the conservation value of circle hooks to guides who use live bait, stressing how effective they would be in saving countless undersized trout from gut-hooking. The reply is always the same, "Oh, they won't work with croakers."

This amazes me and I always reply how well they've worked for me with live finger mullet over the past decade. Truth is- circle hooks have been around for thousands of years and are one of the oldest designs in existence. They were designed to catch fish with no help from an angler such as on a limb and other set lines.

Tarpon shake their heads violently from side to side during the jump which often results in J-hooks being straightened or dislodged from their bony jaws. The circle hook, however, works differently. It is designed to catch and hold in the corner of the mouth as opposed to finding a less reliable grip in some other part of the mouth. When a tarpon goes through it's jumping and headshaking routine the circle hook does its job superbly. Awful cool deal.

When using circle hooks the angler does not "set the hook" in traditional fashion. Instead he simply points the rod at the fish and tightens the drag on the reel and starts cranking line. The hook sets itself with the fish's help and then the angler brings the rod up to fight the fish.

When tarpon jump, it is tradition for the angler to, "bow to the King." In common terms, this means the angler points the rod directly at the tarpon on each jump so that it doesn't fall on a taunt leader and break it or the main line.

The first time I ever saw circle hooks in use in the surf was around 1990 when three longtime shark fishing pals started using them on long rods. They had some success but eventually gave up. They were fishing with the rods in heavy rod holders and the drags tightened down to help set the circle hooks. Several hooks broke from the shock of hard and sudden strikes.

Currently, motivated to conserve the resource, sharkers are renewing their efforts and having some success with circle hooks but also are losing a number of larger sharks as the hook gap doesn't seem wide enough to get a good bite in the thick jaw structure of larger specimens. I've had the same results as everyone else but have always had high hopes of some day finding the right circle hook for the job because I feel sure it would decrease the number of sharks that end up gut-hooked on J-hooks.

While talking with Chris Phillips one day about tarpon hooks he mention a new series of circle hooks Mustad, Eagle Claw and Gamakatsu had came out with which had a wider gap. The Mustad and Eagle Claws were also made of thinner wire for better hook penetration. The Gamakatsu hooks are fashioned from heavier gage wire. In the picture included in this article look at the difference in gap between the top row of traditional designed circle hooks and the bottom row which is the new wide gap design.

The reason for their unusual appearance is a wire permanently attached to keep smaller bottom fish from becoming hooked when seeking larger snapper, grouper, amberjack and other bottom dwellers. Is that cool or what?

Mustad has been one of my treasured sponsors for years and I'm proud of these innovative designs. The lighter gauge wire may well not be appropriate for heavy shark tackle but should hold up to 50 lb. class tackle very well and 80 lb. tackle as long as the angler remembers what that drag was put on his reel for.

The lures pictured here are "Billy versions" of Coonpop lures for tarpon fishing. The hook is cut off the heavy jig at the bend of the shank. The lure is inserted onto the remaining shank of the hook and two split rings are attached to the eye of the jig and an appropriate circle hook is attached to the top split ring via a small zip tie. Tarpon most often throw the hook by using the weight of the lure itself as a fulcrum.

With this setup the lure breaks away when the tarpon tries to throw the weight and the circle hook catches in the corner of it's mouth, it is solidly hooked and the caught vs. lost ratio goes up dramatically.

Likewise, tarpon are quite fond of swim baits but the hooks they come with are too weak for tarpon. So, my friend and co-conspirator, Capt. Curtiss Cash of Port O'Connor set up one in Coonpop fashion as shown. What amazed both of us instantly was the greatly increased swimming action of the lure when rigged in this fashion and I bet it becomes a longtime favorite producer. I'm sitting here now speculating how a smaller version could really prove deadly on speckled trout and bull reds and be near weedless at the same time. Can't help always trying to new things and techniques and trying to come up with a better mouse trap. Just my nature and to me it's a very real part of the fun in fishing.

Had some good bay trips recently wading with artificials but the trout have shown up in the surf and tarpon are being seen so it's time to concentrate my efforts on the beach and nearshore. I know all y'all think of me as a surf fisherman/guide but actually I am a bit more versatile than that and am not with out adequate skills as a lure fishing guide in bay systems during winter and spring and certainly for big game fishing in the nearshore Gulf of Mexico in the Panga. I would ask that you keep that in mind when looking for a guide for these agendas other than the surf.

Be careful, Be Courteous, Be Kind