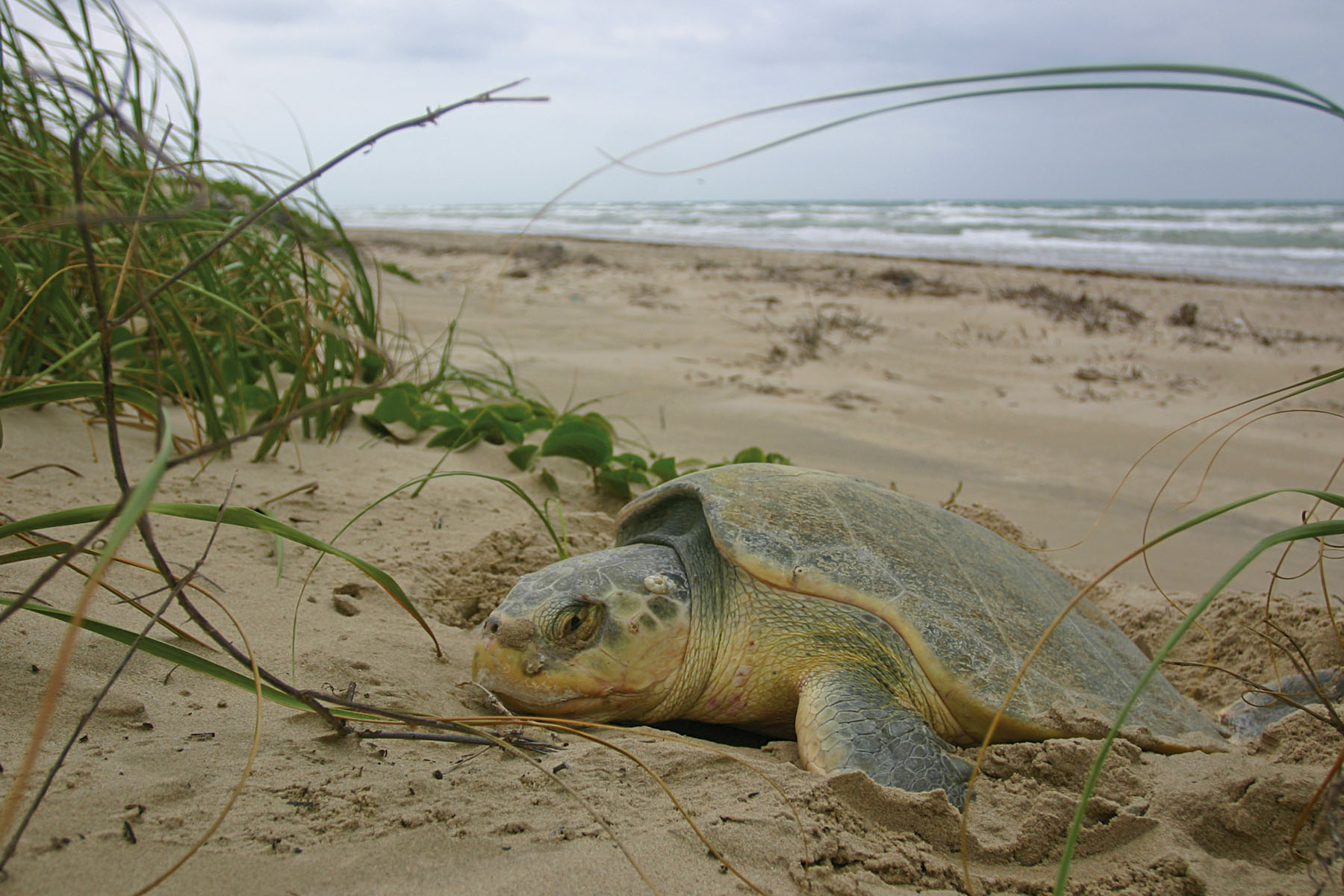 This Kemp’s ridley selected a nest site well up in the fore dunes, but such is not always the case. Nesting turtles are often nearly completely buried near travel lanes.
Well, if you are alive to read this we have survived another winter. I'm supposed to be sight-casting to tarpon at a river mouth somewhere far to the south. Oh well, maybe someday. I've written several times that I believe sooner or later the number of speckled trout Texas anglers will keep per day will go to five or less; if not by TPWD regulations then simply because they won't be available. Like Jay Watkins, I begrudge no one their opinions or legal fishing practices. I will casually request that my customers keep five trout but, if they feel they need ten each, then ten it is for now. I have no children and fish for many species other than trout. My concern for the future of the trout fishery has always been for your children and the resource itself.

It's ironic when I think about it. Above all other species in the sea I love tarpon. I grew up fishing for them and caught one six feet and three inches long off Bob Hall Pier when I was fourteen. I have been blessed to have seen a single school of tarpon pass along the beach en masse from the rising to the setting of the sun. Then they dammed up the rivers and restricted freshwater inflow into the bays and sea while the Mexicans gill netted and dynamited them in tremendous numbers to sell into the U.S. as fertilizer market and also for pet food. I was gone to their little Southeast Asian war and knew nothing about any of it. I came home four years later and was horrified to learn they were gone.

It just didn't seem possible. I had loaded my tarpon rig and drove out to Bob Hall Pier and set out a live bait on the inside edge of the southern T of the pier which had always been known as the Tarpon Hole. Pretty day, right time of year and excellent water conditions so I was really surprised that there were no other tarpon fishermen present. Shortly two young men walked out to the end of the pier and when they how I was fishing they laughed and informed me there hadn't been a tarpon caught there in years. This information literally stunned me and they laughed and said, "Where the Hell have you been man?" Had they have been closer to me their insolence might well have cost them dearly for I had just returned from a world they would never be able to imagine.

"I've been two years in Vietnam and two more in Cubawhere the Hell have you been?" I fired back. They re-evaluated the situation and came over and introduced themselves and explained to me what had happened to the tarpon fishery. I was utterly heartbroken for what had been so recently taken for granted, and a big part of my life was gone. To this day I still have old-time tarpon leaders rigged complete with large red and white corks among my assortment of fishing gear and every now and then I even float one off the panga. But I always remember something else when I take a short trip down memory lane watching that tarpon cork drift behind the panga. I remember how we killed large numbers of adult breeding tarpon for fun and ego and bragging rights photos, leaving them in piles to rot. Isn't it bizarre that man must constantly seek and kill that which he finds most beautiful?

I have fished in the bays for fifty-two years but I've never been nearly as fond of bay fishing as I am the Gulf of Mexico. Papa loved bay fishing and we worked out a treaty where he fished in the Gulf with me one trip and then I fished the bay with him the next. This was subject to revision as per the time of year and the conditions. But the bays lacked the feeling of adventure and huge fish and the element of the unknown that the Gulf afforded me. I know lots of folks who genuinely enjoy and excel at specializing in fishing for a limited number of species but that always seemed a bit too much like having a job to me. I like the diversity of fishing for a wide variety of species often utilizing extremely different techniques and equipment. Something new every day; not just each day the same as the last and the next. Bad manners and large crowds have pretty much taken away any real enjoyment in the bays for me although I will sneak off with Mike McBride or David Rowsey on a play day occasionally. By the way, congratulations to Mark Holt and Capt. David Rowsey on winning the Baffin Bash.

The older I get it seems the more I enjoy nearshore Gulf fishing as well as the surf. I sold my Power Pole as it seemed constantly in the way when trolling or drifting shark baits. I've been running with one engine; a 175 Suzuki 4-stoke and it does a great job but I'm going to add a small 4-stroke "kicker" shortly for safety as I often run fifty miles offshore. I am also putting collapsible fifteen foot outriggers on it. I have a set of goals for the panga and me and actually none of them have anything to do with money; just fish. Ha! I expect that panga to see plenty of blue water this year.

March, April and early May are unique to surf shark fishermen because we get three to four foot sharks that we rarely catch at other times of the year. Bignose, blacknose and finetooth are the three that come to mind immediately. All three of these species MUST be sixty-four inches total length to be retained legally. Very few are that big, so check up on your shark ID reference material to insure you aren't in violation. By the way, should we ever meet, DO NOT go to impressing me by telling me you catch "sand sharks" all the time because there are no true sand sharks in the Gulf of Mexico. Sand sharks belong to the carpet family of sharks and are found in the Pacific. Here in Texas, when you tell a shark fisherman you catch sand sharks all the time, he may smile and let it pass but, in his mind, he's thinking, "Boy, this guy don't know squat." Duck hunters fascinate me as they can identify species and sex of ducks in bad conditions at great distances, but for some reason shark fishermen don't do real well identifying a shark laying right there on the sand and when we don't have nearly as many species to choose from. I don't think any of us truly want to kill endangered or threatened species but it happens because we study the "how" of shark fish to the extreme but bypass the species ID part. And honestly if you are in doubt, the easiest fix is to release the fish and catch another you can ID positively.

Sea Turtle nesting season is upon us so keep an eye out for all of God's children and have a good time in the process.

"If we don't leave any there won't be any." -Capt. Billy Sandifer