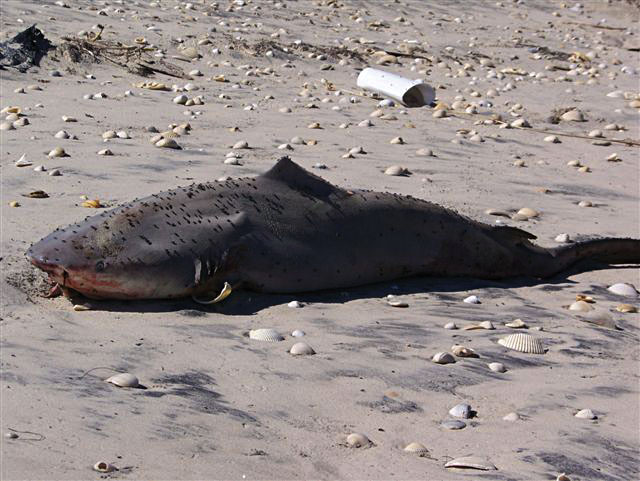 Finned sharks washing up on PINS are evidence of illegal fishing along our coast.
Longtime beach fishers, Dennis and Carolyn George of Helotes, TX were shocked to drive up on six dead bull sharks on the PINS beach recently at the 56-mile with their fins removed. The sharks were otherwise intact and two had 16/0 circle hooks on short stainless steel leaders in their mouths. The Georges reported the incident to me, sent pictures, and then posted a report on a local fishing message board. I immediately contacted the enforcement division of the National Marine Fisheries in Harlingen and forwarded the pictures and report to several other fishing message board owners to help get the word out. Although these were the first "finned" sharks to drift up on the shoreline of PINS in several years, this is far from a new problem.

In all honesty I don't know how long this has been occurring but my personal knowledge of it goes back at least twenty years. What really surprised me was the lack of knowledge of many on the message boards concerning the existence of this situation and their shock and outrage at learning such operations occurred in our own local waters. They knew such things took place in far-away places but not right here in their treasured home waters and that surprised me greatly.

I used to see pangas running at night without lights at high speed on PINS as far back as the 1970s. The sound of their outboards would wake me running on top of the first sand bar. They used the breakers to navigate in the dark. Scary stuff. Well, it didn't take a brain surgeon to figure out these guys were drug smugglers. Then as time went on I began to see other signs of their regular presence in our waters. When you see a white, rectangular, 60 liter plastic gas can on the beach they are from Mexican pangas.

Monofilament gill nets have been illegal in Texas since 1980 but I regularly see pieces of it on the beach and some longer pieces will hold dead sharks. I've seen hammerheads over ten feet and tiger sharks over nine feet in this webbing. These are not abandoned; they have been lost in rough seas.

In the early 90s I spoke with TPWD Game Warden Henry Balderamas who was at the time working out of Port Mansfield. He advised me that typically these boats came out of Mexico with a load of drugs, delivered their cargo, and then fished for sharks on the way back to Playa Bagdad and other locations in Mexico. Warden Balderamas also advised that if I would call him when I saw their nets he would take quick action to dispatch enforcement personnel. I did this upon occasion and arrests and seizures resulted from the enforcement efforts.

This illegal and wasteful fishing practice is a very real threat to our fisheries and all of us can play a role in assisting the game wardens. We have cell phone service in the Mansfield Channel area and all you have to do is make a call to make a difference.

This "finning" of sharks is all about supplying world demand for shark fin soup. For centuries, certain Oriental cultures have believed that the fins of sharks contain a powerful aphrodisiac and they therefore trade at premium prices. Odd, I wasn't aware the Chinese had any problem re-producing.

From my research on the shark fin subject I have learned that some of these Mexican fishermen are working and risking their lives at sea for the paltry sum of $15.00 per day while in the Orient a bowl of shark fin soup fetches a handsome price. Sadly, the shark population of Mexico's entire east coast has been decimated through over-harvest. Even sadder, they now ply their trade illegally in U.S. waters.

While doing my research I came upon a very good video and an extremely informative article on this situation. To learn more go to www.vlip.tv/file/2491252 for the video and www.texasobserver.org/archives/item/15765-blood-treasure for the article.

Interestingly, during my research, I also found quotes from Mexican fishermen that the average size of the sharks they are catching off Texas is decreasing. This is a hateful and wasteful business and we are in a position to help stop it. I am very fond of a line following one of my favorite movies. It says, "The only thing necessary for the triumph of evil is for good men to do nothing." I have been in contact with an associated press reporter out of Fort Worth concerning this illegal fishing activity and he is coming to South Texas to work on a story. Maybe it'll anger enough people to get the enforcement agencies some much needed support.

While the speckled trout tagging program being conducted by Dr. Greg Stunz and his graduate students at Harte Institute for Gulf of Mexico Studies at T.A.M.U.C.C. is proceeding according to plan collecting and tagging bay trout, we have only been able to tag one surf fish so far this winter.

What was once an abundant fishery has been in steep decline for years and so far we simply haven't been finding fish. Hopefully more can be caught and tagged in the surf once the water begins to warm. Surf trout fishing is usually best when the water is around 58 and it's been running 54-56 for an extended period of time. Corpus Christi weatherman, Dale Nelson, says this is the coldest winter here since his arrival 23 years ago and I believe him. The killer freezes of 1983 and 1989 were short term events. This year has been colder day in and day out and it's hurting our fishing. It will be interesting to see if early March brings our typical spring fishing pattern or if temperatures will delay them a bit.

A total of 80 trout are to be tagged. Each will have an external green tag near the dorsal fin and a $300 acoustic transmitter surgically inserted in their abdomen. PLEASE DO NOT KILL THESE FISH OR REMOVE THE GREEN DART TAG IF YOU SHOULD LAND ONE PLEASE RELEASE THESE TROUT. Substantial rewards are available for participating in data return. Tag number, date and general location of capture can be submitted to the telephone number on the green dart tag. This program is intended to track trout movements within bay systems and the Gulf of Mexico.

This may be our only opportunity to ever conclusively prove or disprove the long-believed "Tide Runner" theory and I think that it is extremely important to know if this phenomenon still exists in order for TPWD to better understand and manage this very important resource so near and dear to the hearts of many of us.