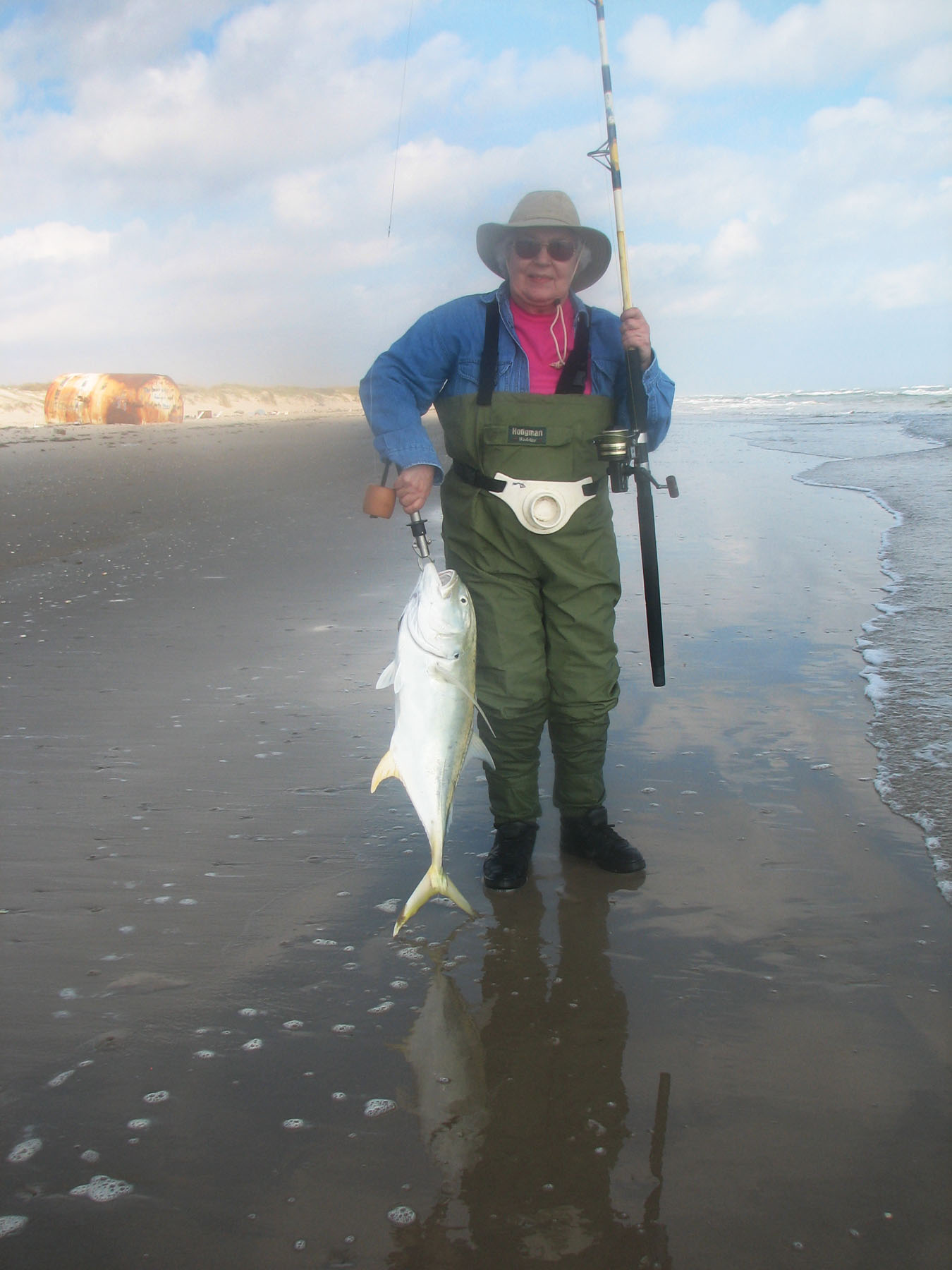 Ms. Geneva Greene of Wichita Falls with a lure-caught 15lb Jack Crevalle; 26 Nov 08.
Happy New Year everybody! I've been thinking of ways to expand the services I offer in my guide business. I wanted something that would be fun and productive and offer new ways to enjoy the outdoors. I'm now a member of the pro staff for Jerry B's Kayak Sales in Flour Bluff and am doing half and full day kayak fishing and birding trips in nearby waters. My plan is to ferry kayaks and customers in my 25' Panga for trips to Baffin Bay and Nine Mile Hole in addition to the other services I offer. Fishing from kayaks during winter and spring in Baffin will give "grinders" an opportunity to fish locations too muddy and too deep to wade and the results could be phenomenal. There are some places I've wanted to fish for years that should be a piece of cake using kayaks. Visit Jerrybskayaks.com or my web site for details.

Hurricane Ike deposited the largest amount of debris I have ever seen on the shoreline of PINS. PINS park personnel, Sunny Beaches. Org, and other organized cleanup events have the first 15 miles looking pretty good but the volume of debris south of there is absolutely overwhelming. It makes me sad and I tell customers, "This is not trash; this is the wreckage of people's lives."

The sand is rapidly covering items in some areas but large plastic objects won't cover easily or quickly. In the Big Shell area they won't cover at all due to the amount of shell mixed with the sand and also due to the higher elevation of the beach there. The upcoming Big Shell Cleanup on march 14 2009 will face the toughest challenge we've ever came up against. Toughest will be the size of the debris and the plastic and metal items that are simply too large to put in bags. It's going to require lots of plotting and planning this year and it's already keeping me up at night. One thing I can't get out of my mind is how much of this stuff is recyclable and still usable. I will be meeting with our PINS coordinators soon to get firm commitments concerning what we can/cannot do during the cleanup.

For years I have been concerned about the long-term future of the Big Shell Beach Cleanup. Longtime friend, Steve Naylor, of Round Rock and I came up with the concept of forming a nonprofit C3 group to support the cleanup. Steve volunteered to fight the mountain of paperwork required to form such a group that was 100% "street legal" and also to serve as secretary/treasurer as long as I agreed to serve as president.

I asked Dr. David McKee Ph.D., Professor of Biology at Texas A&M Corpus Christi and longtime co-organizer, Tyler Thorsen, to accept positions as vice presidents and the four of us comprise the board of directors. The group was named "Friends of Padre, Inc." and was founded on 18 February, 2008. The purpose is to undertake activities that will protect, improve and restore Padre Island with our primary activity being to use funds collected to execute the Big Shell Beach Cleanup.

Mr. Leon McNinch and Jim Mayo, representing the Ruth Phar Sparks Foundation, helped purchase last year's event t-shirts, helped us battle the formal paperwork for forming the group, and later donated $17,080.00 to our general fund. Of this donation, "Friends of Padre" wrote a check to the Sea Turtle Science and Recovery Program on March 28, 08 for $15,480. These funds were added to other donations and used to secure significant matching funds from a federal grant program to support the turtle program this past season.

Funds donated this year will likely all be used to support the Big Shell Beach Cleanup. I'm strongly considering hiring operators with appropriate vehicles and large trailers to haul out as much of the big debris as possible. Availability of funds will determine if this is possible. To do any real good we have to figure out how to haul out a greater volume of debris than we ever have before. Then- PINS administration is going to have to figure out what to do with all the material we are able to get hauled out.

This event has never been simple to plan and execute and it's going to be even more demanding this year. Anyone wishing to donate to Big Shell Beach Cleanup, the mailing address for "Friends of Padre, Inc." is P.O. Box 1420 Round Rock, TX. 78680. Donations are tax deductible. Board members receive no compensation and all funds will be used "to get it done." We need any and all support we can get this year and any companies that might have trucks and large trailers available to assist would be invaluable. There is a website coming for Friends of Padre, Inc. but with a tight budget and nobody getting paid it might take a while; please bear with us.

To surf fishermen, 2008 will be remembered as the toughest fishing and least catching of our lives. I just shrug it off and tell folks, "Well, there has to be a worst year just as there is a best year. So, '08 is the worst and we've lived through it and now we can get on to some better years." A combination of weather patterns and climatic events resulted in this "Worst Year" scenario but in reality the recurring upwellings of cold water impacting the PINS shoreline did the most damage. It kept water abnormally off-colored and cold for the better part of the year and took a terrible toll on our catching. There seemed little rhyme or reason controlling the arrival of the upwellings and some lasted for three weeks. During the brief periods when the water cleared, catching was fine but in the murky and cold water during the upwellings it was as tough as it gets. Interestingly enough the upwellings didn't impact as much on Mustang Island and the northern end of Padre Island and very probably the fishing was better there than on PINS. Another first in my lifetime.

The dredging of the Mansfield channel (East Cut) was completed as of around 20 Nov. and the jetty is once again accessible to vehicles. The channel was dredged to a depth of 22 ft. and we have a wonderful beach extending far out to the east along the channel. At the same time there is already a sheer ledge forming where the new dredge material is being swept away and in a few years we'll be right back where we were. Life is like that. As far me, my thoughts are on winter makos, sandbar sharks and Baffin trout. Here's to a better year for all of us in 2009. Life's a hoot. Instead of spending all your time worrying about the future use some of it to go fishin' now and then. It'll pay off big time.

Be Careful, Be Considerate, Be Kind. Capt. Billy L. Sandifer