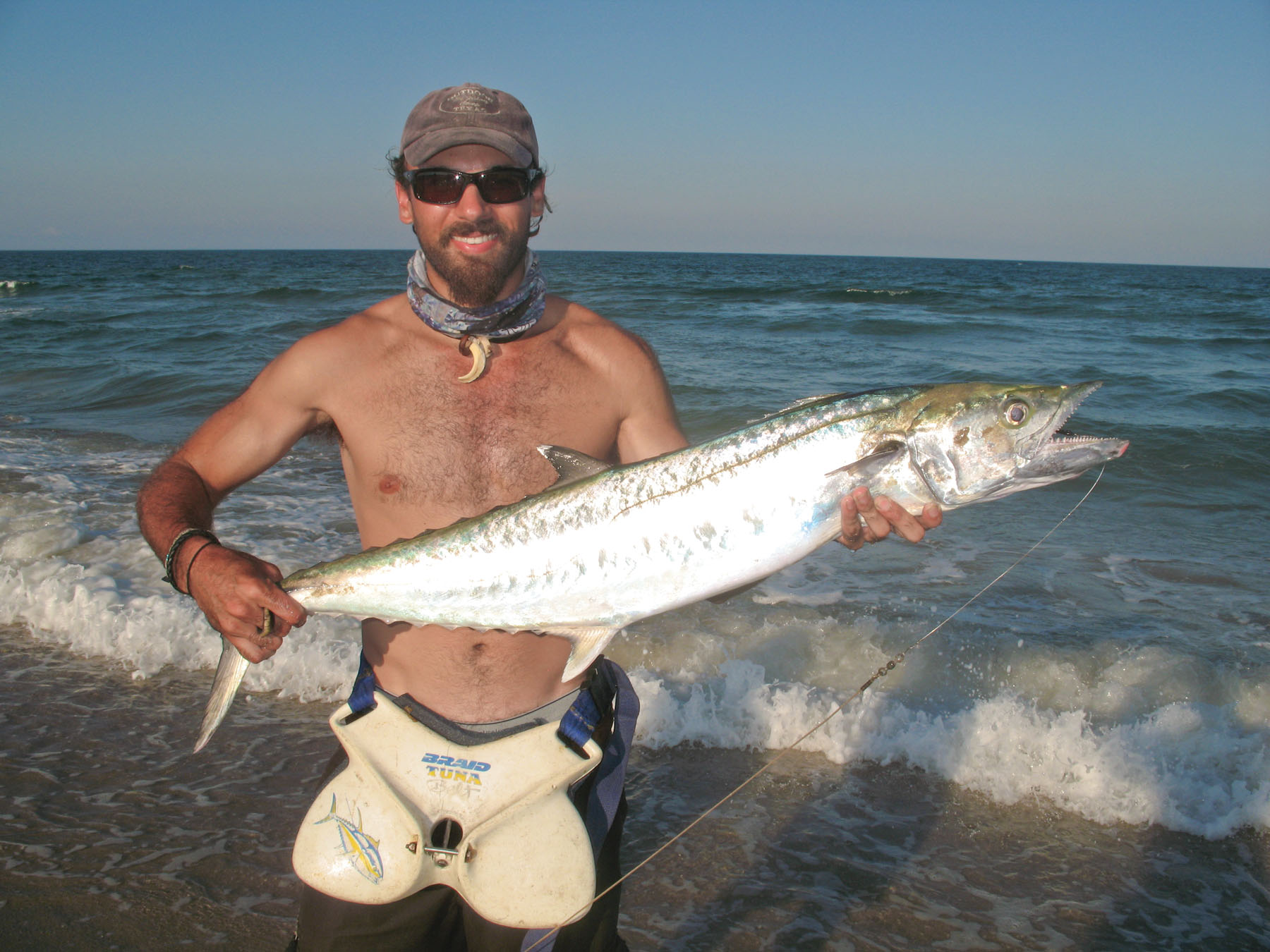 Travis Velasco with kingfish from the PINS surf.

August was one tough month for those grinding with artificials in the surf. Deathly still mornings were so hot at times it would make us nauseous, and with the lack of water movement, halfhearted strikes were few and far between. Then the afternoon winds would rescue us and the catching as water movement increased and trout readily hit our topwaters. Third week of August, the trout disappeared and large numbers of newborn sharks and kingfish invaded the surf as they have always done at this time of year. They will stay for a couple of weeks and then new visitors will arrive for their annual visits. It is learning and keeping track of these constantly changing annual patterns that separate surf fishermen from very good surf fishermen. I'll not miss the late August heat.

I am thrilled and would like to congratulate Alberto Zerluche on his catch and successful release of a 12' 6" tiger shark with a 78" girth off Bob Hall Pier. I BELIEVE this is probably the heaviest shark EVER caught off Bob Hall Pier. Larger ones were said to have been caught off the pier years ago, but in many cases, I know they were caught down the beach and taken to the pier to protect the beach fishermens secret fishing hole. Alberto is the manufacturer of Z's custom fishing tackle and creates weights and custom leaders for fishing piers, beach and jetties. This fish was caught on one of his custom pier shark leaders. His web site is zseasyfishin.com. Alberto has been advocating catch and release to the Bob Hall fishermen for a long time and they've been a tough crowd to turn around and my hat's off to him.

No one has figured it out yet, but somehow that dusky shark Eric Ozolins placed the satellite tag on that was pictured in last months issue managed to shed that tag. How funny. It first started off at Yarborough Pass and then went to Baffin Bay. Guess Baffin Bay didn't suit it, so it promptly went to Choke Canyon where it hid out at a house there for several days. What a hoot! Turns out some beach fisherman found it but didn't know what to do with it and after a few days he gave it to a biologist who gave it to another biologist who returned it to Harte Institute. Now they will have about a month's worth of data on that shark and can then have it rehabbed and use it again. That was the last tag they had and good on the folks who found it. Five thousand dollars is a lot of money for a tag and thanks to these folks, it won't be wasted. Not a clue how it got loose. Maybe the fish scraped it off on the bottom of a shrimp boat. No way to tell.

Recently I was on a combination shark-light tackle trip and the trout fishing was as slow as it gets. I put my customers out and shortly after arriving at the bar one came back and said there's an eight foot bull shark out there. Within seconds a sixty pound tarpon free-jumped in the first gut and this was immediately followed up by a big nurse or lemon coming up on top. In spite of my urging, the customers weren't ready to stay in one spot yet so we drove off and left those fish and never caught a trout the rest of the day. When you hire a guide, it is your hard-earned money being spent, and it's your day not his. BUT if you want to catch fish, it's well advised to depend on the guides judgment. Especially in a situation like that. Things like that will make or break your day. Won't stop you from having fun but sure will make a difference in the catch.

I've received many inquiries so I'll mention here that my younger brother, Jimmy, died at 7 a.m. on Sunday, 14 August, 2011. His suffering had been unbearable for some time and he's in a better place now.

I went to a public meeting on the proposed Baryonyx wind farms that was held at Texas A&M Corpus Christi. I addressed them and acknowledged I knew they have been considering neo-tropical bird migration but had they considered the dangers to fish-eating sea birds attracted to the turbine structures by shoaling bait fish seeking cover there. The terrifying answer was No, we hadn't thought about that. The proposed wind farms cover 60,000 acres. I specifically asked if boaters and fishermen would be allowed within these areas. They assured me Baryonyx had no problem at all with that, but they couldn't speak for the government agencies. Bet we all know what the answer to that question will end up being. The problems with wind farms have been in the news quite a bit lately, but it's only covering the tip of the iceberg. This is the biggest scam ever ran on the American and international public in a very long time.

After deliberation, we have rescheduled the 2012 Big Shell Beach Cleanup for Saturday, 25 February, 2012. This was done to avoid the March 1 change in speed limits on PINS. But looking back, we've always received comments from people wishing it wasn't during Spring Break, so that will take care of that issue at the same time. I went back through my log books for six years and found the weather on 25 February has been better than on our cleanup dates all six years.

Seems as if NPS has ran into some political problems with their policy of changing the speed limit. We'll have to wait and see. To me, the bottom line is quite simple. Is PINS a turtle preserve or a National Park for the use of citizens while protecting ALL species of wildlife? I could go on and on but I won't, but I do know that the enabling legislation forming the park intended it for the use of citizens for recreation as well as to protect the resources. My real fear is that this lowering of the speed limit is only the first step in limiting our access to the beaches of PINS. One thing the regulars have been talking about is how many long-term beach users of many years we are not seeing this year. I don't know if it is the economy or park PR problems, but I do know it's very important to the economy of the Coastal Bend. Visitors have malls, museums and parks where they live. They come here for the bays, the Gulf, and the beaches.

I'm always preaching to y'all about taking emergency supplies with you, so I was put in my place last week when I had a flat and found all three cans of my Fix-a-Flat stash were so old they had leaked down and wouldn't work. Nice fella came by and I asked him if I could borrow a can from him and search as he could he couldn't find his. So check out those emergency supplies from time to time. The driving in the Big Shell just gets worse and worse every day and it will most probably continue to do so until we finally get some much needed rain. Driving out front hasn't been possible for large stretches of the Big Shell, and we just have to get up in the main track and deal with it.

I'm taking Harte Institute scientists down island tomorrow with the goal of tagging twenty newborn sharks known scientifically as neonates. Once they wonder through our area the Spanish mackerel, bluefish, skipjacks, tarpon, and various other species should show up feeding on huge shoals of dusky and bay anchovies and finger mullet. The next real change will happen behind the first two northers of the season when the surf becomes alive with fish. Make sure you have some single strand wire leader material with you or be prepared to lose lots of tackle and fish.

I'm told I am featured in the October issue of Sport Fishing Magazine for being one of the winners in their Making A Difference conservation awards in July. Life's a Hoot.