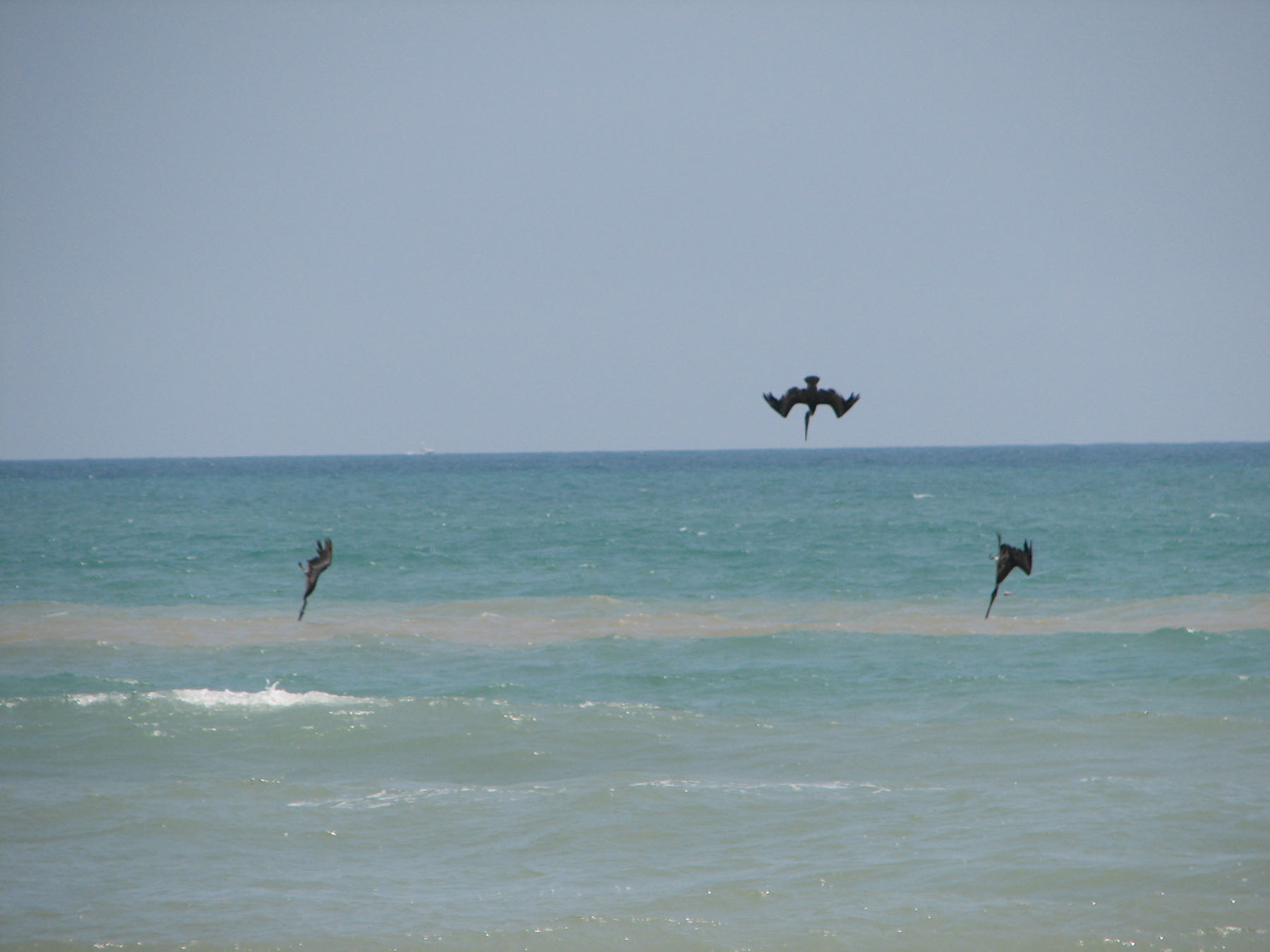 Brown pelicans feeding in the immediate area of an upwelling of cold offshore current impacting the outside sand bar.

The upwellings of cold offshore currents continued on the beach of PINS throughout the month of July and sure made for some tough fishing. Combine this with 2007 being the year of record for the amount of sargassum weed impacting the shorelines and the amount of rain and it's easy to see this has been a tedious year in the surf zone. We had some good catch days on speckled trout but other species were hard to come by as water temperatures remained 80 to 82 degrees and water murky. Typically water would be crystal clear throughout July with water temperatures in the neighborhood of 87 degrees. Every time I would hear of an increased number of shark encounters by bay fishers I would instantly think, "why not; that's the only place the water temperature is warm enough to suit them."

On July 23 we felt the impact of a mid-summer cold front and although it brought back substantial amounts of sargassum for the short term it also seemed to have an impact on the offshore upwellings. The upwellings became smaller in scale and of shorter duration following the cold frontal passage and water began to clear and warm to more normal temperature levels. The catches improved and then on 3 August the water temperature reached its typical 87 degrees for the first time this year. Immediately large shoals of dusky anchovies moved into the surf zone followed by Spanish mackerel and large numbers of ladyfish. Tarpon were observed slightly offshore and it appears that barring tropical events and red tide we are back to business as usual.

It's impossible for September not to be my favorite month of the year for fishing in the surf. The abundance of tarpon, large jack crevalle and sharks has led me to reserve September for big game and fly fishing charters. The dusky anchovies will reach their highest numbers and the first northers will start the finger mullet migration through the surf and it seems everything in the Gulf of Mexico moves into the surf to feed on them. Predators will be taking on as much protein as possible to be ready for their own migrations in the upcoming months.

Redfish will follow the finger mullet out of the bay systems in the largest numbers of the year but it is often difficult to concentrate on redfish with so many genuine gladiators available. I've always thought of September as the "Time of the Frenzies" and it is indeed a wondrous spectacle of the Natural World. Busy times lie ahead through early November and I look forward to them even more this year as I will be chartering my 25' Panga nearshore after these big game species as well as surf fishing.

A word of caution; anytime one is fishing in the midst of a frenzy it is a given that apex predators are present, regardless of whether they are visible or not. Take the utmost caution to be on the lookout for large sharks approaching and do not wade deep guts to cast farther offshore.

The art of topwater fishing in the surf has been on my mind daily for the past two months. I've told friends they need to outlaw all those TV shows about peacock bass fishing because it's almost impossible to convince my customers to work their lures in a moderate "walk the dog" fashion. They seem determined to "rip" the lure a foot or more at a time and the simple truth is that the trout in the surf show no interest in such a presentation.

There are so many more dynamics at play in the surf than when bay fishing that it is indeed a different game. Constant waves are breaking over and obscuring the lure and the waves and the current move it through the strike zone quite rapidly. The trick in the surf is to retrieve in a moderate and steady fashion intentionally attempting to make the lure touch its own tail with minimum forward progress and maximum noise and time in the strike zone.

Methodically casting behind an incoming wave will keep the lure from being swept along by the swell and increase time in green fishable water rather than being in white foamy water where it goes by fish undetected or too rapidly to attempt to catch. Most often at this time of year the trout aren't really feeding at all and the strike is pure aggression. Thusly, the longer you pester them with the lure in their immediate area the more subject to striking it they become. The surf is the only place I know where the majority of bait fish movement is into the current. Casting up current hinders both the action of the lure and the chance to remain in constant contact with it. Instead, I always cast slightly down current so that the lure is moving slightly into the current during my retrieve. It appears more natural when cast and retrieved in this fashion and it is easy to maintain constant contact with the lure and to have better control of its movements during the retrieve.

I want to put in a plug for Daiwa while talking about recent top water fishing. I fish long days and last month I used my Team Daiwa Advantage 150H Baitcasting reel 18 days in all types of conditions while only cleaning it twice and replacing one side bearing. The drag remains superior to many reels costing twice as much, even after battling jack crevalle. Both the Team Daiwa Advantage 150H and 153 HST are excellent products and I highly recommend them. If they can survive both me and the surf they are truly something special.

Juvenile green sea turtles are being observed in record numbers on the beach this year. Unfortunately there have been observations of people intentionally catching these turtles and bringing them on shore to pose for photos. The danger of them being hooked by fishermen has also increased. All sea turtles are protected under the Endangered Species Act and the green turtle is listed as threatened. Enjoy seeing them as one of nature's wonders but do not bother them. To do so is in violation of the Endangered Species Act. If you observe individuals engaged in the above activities notify TPWD Game Wardens. This is not a game. While fishing wrecks on the beach there are usually several of these small turtles observed constantly. I only fish the wrecks with lures when the turtles are present as they will eat baited hooks. Should you unintentionally catch a sea turtle, release it immediately and as gently as possible and if it is injured notify park officials so that it can be taken to rehab.

Can't wait to be knee deep or on the panga in the middle of one of those frenzies! What a Hoot! Be Careful, Be Courteous, Be Kind. - Capt. Billy L. Sandifer