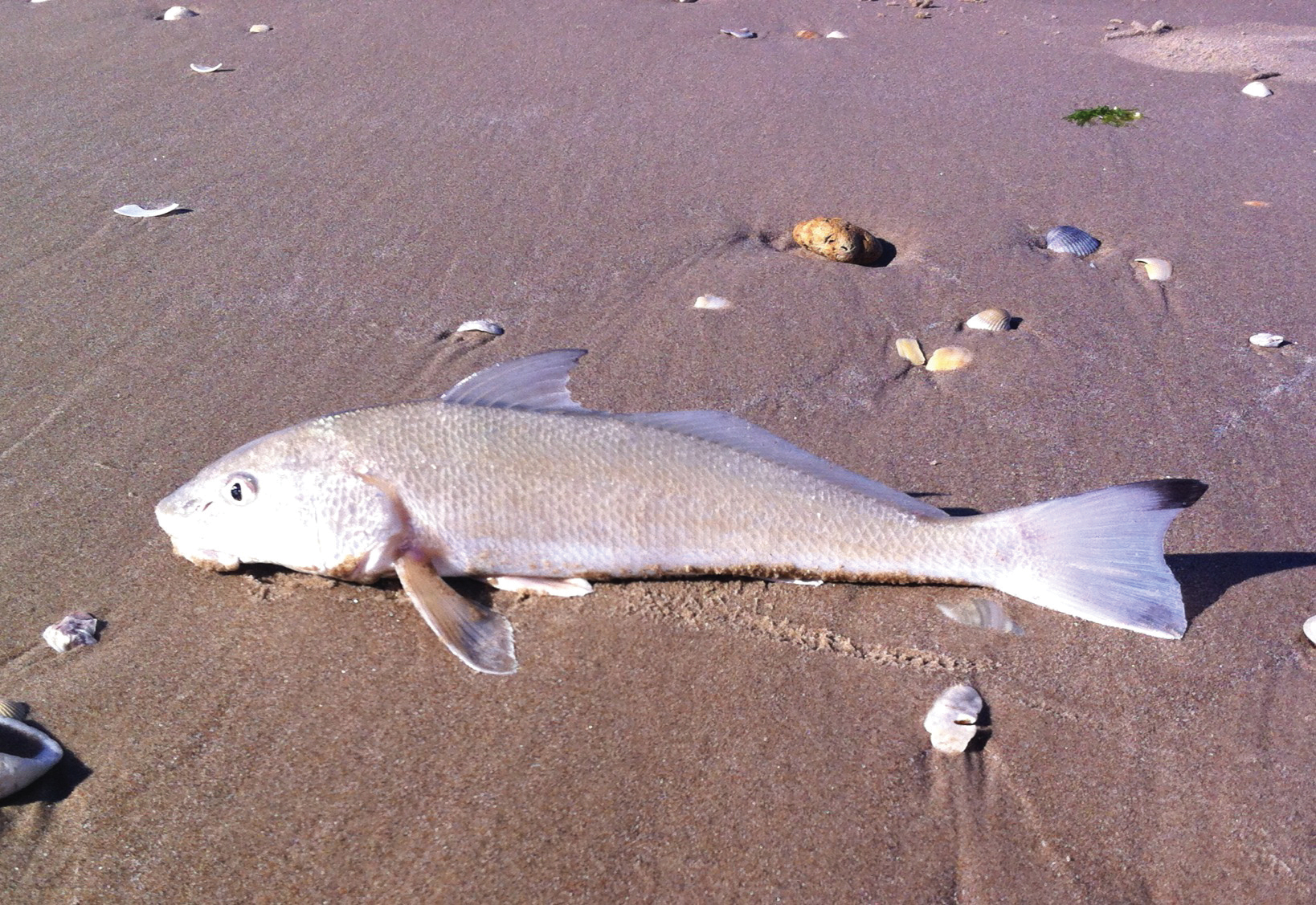 Gulf whiting, most common species caught on PINS. Courtesy of Jeff Wolda.
I want to address the status of our speckled trout fishery, currently as well as historically. It would seem appropriate to do so since TPWD is conducting scoping meetings up and down the coast to seek fishermen's input regarding management options that might result in changes to the regulations concerning this important fishery. Since I am primarily a surf angler I am going to address speckled trout from the perspective of the surf only and leave the bays completely out of the discussion.

Padre Island National Seashore has been renowned for a very long time as having the only winter surf population of speckled trout on the Texas coast. While this fact has been somewhat widely understood for decades only a tiny sector of the general fishing public were sufficiently knowledgeable and dedicated to catch them with any regularity. I referred to these anglers as the "the clan" and they all knew each other and they were extremely tight-lipped and secretive about their activities. I was the first newcomer they'd let into their circle in many years. Mr. Ralph Wade pretty much sponsored me into the group some thirty years ago.

The clan's bait of choice was the 51M MirrOlure twitchbait and catching winter specks on PINS was a rather complex and detail-oriented endeavor. If shark fishing requires the brawn, then winter trout fishing requires the brains. Seven or eight fish in 23-to-26 inch-class would be the results of an average good outing back in the day, although I have caught over eighty in a single day that averaged three and a half pounds. One season I caught sixteen trout that weighed over eight pounds.

Chasing these trout during winter became my favorite thing to do and I intentionally didn't try to get many winter trout charters so as to avoid publicizing this fishery. Finally our Caller-Times outdoor writer blackmailed me into doing a couple of articles about it with him and some tried their hand at it, but gave up rather quickly as you really had to know how to catch them to be successful.

Then coinciding with the widespread use of live croakers as summertime bait for trout fishing in area bays, our trout numbers in the winter surf began to drop dramatically. Each year there were less than in previous years and starting in 2010 there were no longer enough trout in the surf to justify fishing for them.

Experienced anglers well-versed in the how-to of winter surf trout tactics during near-perfect conditions began to yield only one or two bumps during a long day of grinding. It wasn't long before getting totally skunked became the norm. Even still we retained an excellent June and July topwater bite.

Fishing with croaker in the summer surf was unheard of until the mid-90s but as soon as the efficiency of the method was advertised it showed up in full force. Since then the numbers of summer trout has also dropped notably.

People have the right to fish with croakers or any other bait they may choose but we have to do something to protect the resource from us or I fear the fishery will disappear. It's already happened in the surf and if we don't make some type of rules to protect the fishery we will likewise lose it elsewhere.

Although I know they are no longer there I can't help fishing for surf trout several times each winter. I miss them that much. It's happened to me; now let's take steps to insure it doesn't happen to you.

On another subject - there is still lots of speculation going around concerning the future of the 3,860 acres of land between the Padre Isles housing area and the National Seashore. There are federal guidelines in place about what can and can't be done with that property and apparently it can not be legally developed. We'll just have to wait and see how it all ends up. A very disturbing find on this land recently was the skinned and mutilated bodies of over 40 coyotes including pups. A subsequent search resulted in a steel-jawed trap being located on public property near Newport Pass. At this time Friends of Padre is looking into offering a reward for information leading to an arrest for these illegal and dangerous activities. I'm curious about the real motivation for this as South Texas coyote hides are typically not thick enough for the fur market. I know years ago they would be transported to an area where there was a bounty on coyotes but these are high numbers for that type of activity. I just can't imagine Padre Island or South Texas without coyotes. I know for years my urban dwelling charter customers were always overjoyed at getting to see a real coyote and in many cases it was the highlight of their trip. The coyotes have lived out there for thousands of years and it is us that are encroaching into their homeland; not them encroaching into ours.

In future articles I want to start addressing the most commonly sought and caught fish in the PINS surf individually and the whiting will be my first installment.
Day in and day out the most common fish from an anglers perspective is the whiting. There are three species of whiting and those most commonly encountered in the surf are the Gulf and the Southern Whiting. The Gulf species is silver with a black tip at the top of its tail. The Southern is mottled in color with small teeth; it is fatter and seems the most aggressive. Both are present year round in the surf but winter and spring produces the largest specimens. The Gulf whiting is almost entirely a crustacean feeder while the Southern feeds on fish as well.
The state record Southern whiting was 22" long and weighed 3.62 pounds while the record Gulf is 2.38 pounds and was 19.8" long.

Typically both species are fished on bottom using double drop leaders, sinkers and dead shrimp and or Fishbites. Actually both species are quick to strike small Kastmaster or Mr. Champ spoons and on light-tackle provide fine sport. The lowly whiting is looked down upon by many surf fishermen but not by those seeking a tasty mess of fried fish. I had numerous customers who preferred whiting over any other species for table fare.

These pan fish of the surf can be quite illusive and that's not surprising as everything out there eats them. When targeting whiting I always have everyone cast as far out as possible but if they don't get a strike shortly I have them pull the rig in about six feet and continue doing that till they get a strike or their leader is at the water's edge. It's simple enough; there's no way of knowing how far offshore they are until you catch some. When sharks and other predators are thick the whiting often come into the shallow white water quite near to shore to hide from them.

Whiting are the best barometer I know of for predicting what kind of a day you are going to have because if you can't catch a whiting on shrimp and Fishbites you're not going to catch anything else either; except maybe hardheads. 2/0 wide gap hooks are my choice for whiting.

Stop and try all holes and rips as well as in deep guts until you have the fish located. When you catch 15 or 20 whiting in a location and the action abruptly stops it's time to move because you have either "fished them out" or a shark has moved in and spooked everything out.
Now here's a common sense tip for you. If three of you stop and cast out and all three immediately catch hardheads, don't waste your time there. Get back in the truck and relocate.

We peel our shrimp because that's the way the fish like them. If they wanted them boiled we'd do that as well. Can't you just picture me wearing a chef's hat boiling shrimp for bait on a Coleman stove at the 40 mile beach? What a hoot!

If we don't leave any there won't be any. Billy Sandifer