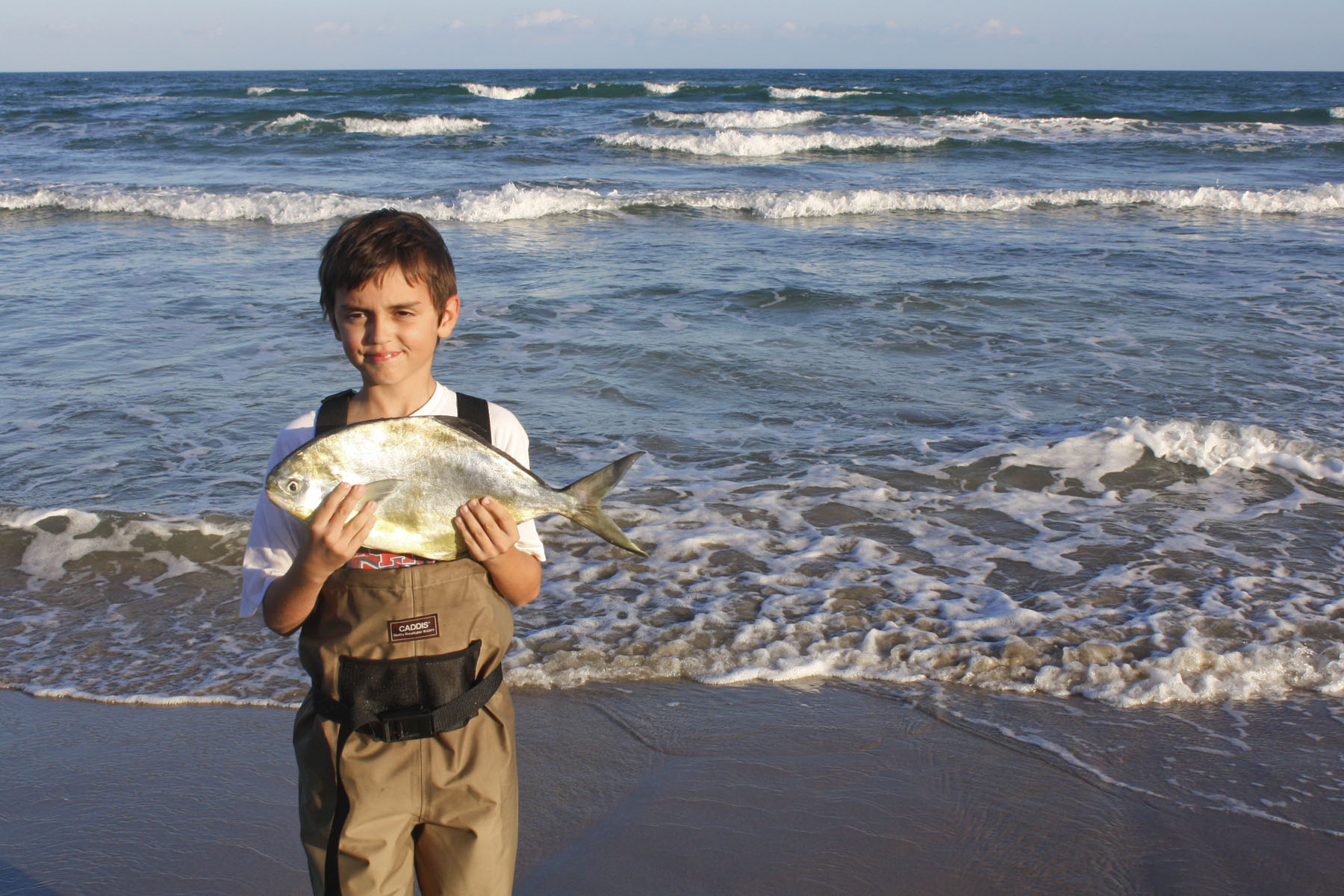 Martin Wolf, age nine, five pound pompano.
The right rear corner of my exhaust manifold is broken and boy does that Suburban ever get loud when fighting its way through the Big Shell on the afternoon high tide. More important I know if I don't get it fixed I'll burn the valves in my engine. Also this feature article was due. Now it ain't like those studs are going to just unscrew themselves from that rusty ol' beach Suburban. A cutting torch and the drilling of holes will all add up to a very tedious experience before a new manifold is in place. Took me several days to find a victim, I mean mechanic, willing to even attempt the task. I had set up an appointment to work on it yesterday morning.

I awoke around 6 a.m. and was sitting quietly planning out the day's schedule when the phone rang. It's Mark Hanson of El Campo telling me they are running a bit late for today's charter. I said, "Mark, I'm not booked today, you have me booked for next Thursday not today. Wrong! So I called the mechanic and told him I had a charter and spent the next forty minutes at warp speed getting everything ready to take five people fishing. Just to make it more entertaining I'm a bachelor this week and had to get my coffee and lunch made as well. I had Mark come to my house so they wouldn't have to wait in some parking lot and actually we got it all done with little lost time.

Now as you read this you know good and well a start like that could/would ruin the day right off the bat for the vast majority of people. But the Hanson family was enjoying the Christmas holiday together and intent on having a good quality outdoor family experience and I looked forward to taking them fishing one heck of a lot more than I did laying under that Suburban fighting that manifold all day. So everyone was laid back and as we started off I told them, "We are going to have an awesome day. Days that start off all messed up end up being the best days of the season IF you just go with the flow and don't let unavoidable inconveniences spoil your day right off." We didn't and the conditions and day were absolutely ideal. A genuine work of art. So are the Hanson's.

Mark had fished with me before with a crew of hardcore grinders and told me this would be a family day trip and some family members lacked much experience. I grinned because I like this type of trip and I know the solution is tutoring and improving their casting skills and "Fishbites" and dead shrimp on the bottom. Mark was going to have to become a bottom fisherman for the day. The day before, the peak area of activity was down around the 42 mile beach so I went directly there on the wonderful morning low tide with lots of two-wheel driving time. We typically fish light eight and a half foot spinning rigs for the pompano. Long distance casting tackle will day in and out produce many more fish but it sure doesn't give the pompano much of a fighting chance and they actually are very sporting using light tackle.

The trick is to reach the pompano with the little tackle as they tend to hold farther offshore than most other species. I picked a 75 yard area where the wade gut was absent and a wide, deep first gut came right up against the shore. I rigged up everyone's tackle and walked out and cast for the girls. When I got back to the beach I turned around to look and both had bent rods. The pompano bite was going strong from the beginning and as everyone got more practice casting and made longer casts the pace quickened. I looked up as Rachel and Matthew came walking in with two pompano on each of their rigs and looked offshore to see two other family members were also fighting fish. Momentarily six pompano flopped about in the sand at my feet.

Everyone was having a ball and life was good. Matthew took a swell over his waders and started fishing in his shorts amongst much teasing and laughter ruled the day. We chatted about how perfect and beautiful everything was and remembered the day's gloomy and confusing start. Some were released, but they caught a total of thirty-four pompano weighing up to five pounds and averaging two and a half pounds.

Then seventeen-year-old Sara catches the first redfish of the day and instantly the pompano are replaced by a school of redfish. The Hanson's end up with eight redfish weighing five to seven and a half pounds. Mrs. Ruth comes up laughing and tells me, "Billy I like catching the fish but the best part to me is to watch my children catch them and having so much fun doing it." Heck, that's how it's supposed to be; isn't it?

Moments before sunset a tired but happy and content family stood in my yard and laughed and recounted their perfect day as we stowed their gear and fish and the conversation turned to the possibility of making this an annual part of their Christmas family vacation.

But see, here is the deal. All six of us were determined to make this a memorable and perfect day. We had made a like-minded decision to have a ball and we did. It would have been easy for us to have ruined the day at the very beginning when I was caught completely off guard and they could have quickly developed a negative attitude about that and tension could have ruined the day. But we all were kind and considerate and supportive of each other and the Creator and Mother Ocean must have approved of our decision and actions and blessed us bountifully. We were genuinely blessed however it required a bit of effort on our part to make it so. Think about it. I am not much on holidays but I tell you the truth; that day was my Christmas, not December 25th.

Everything seems to intend to continue to run a month late in the surf right through till the end of 2010. On 22 December I saw several large jack crevalle feeding on finger mullet. I have never seen a large jack in the surf later than 12 December. Then on 23 December I saw a six foot tarpon free jump at the 42 mile beach and later another at the 40 mile. Things are changing in the great outdoors. There is a twenty pound black drum bit in half on the north end of the beach by a single bite. From the shape and size of the bite mark it took at least a ten foot tiger to do it. Have a good New Year and remember "Life's a hoot." Take time out to enjoy some of it.

"If we don't leave any there won't be any." -Capt. Billy L. Sandifer