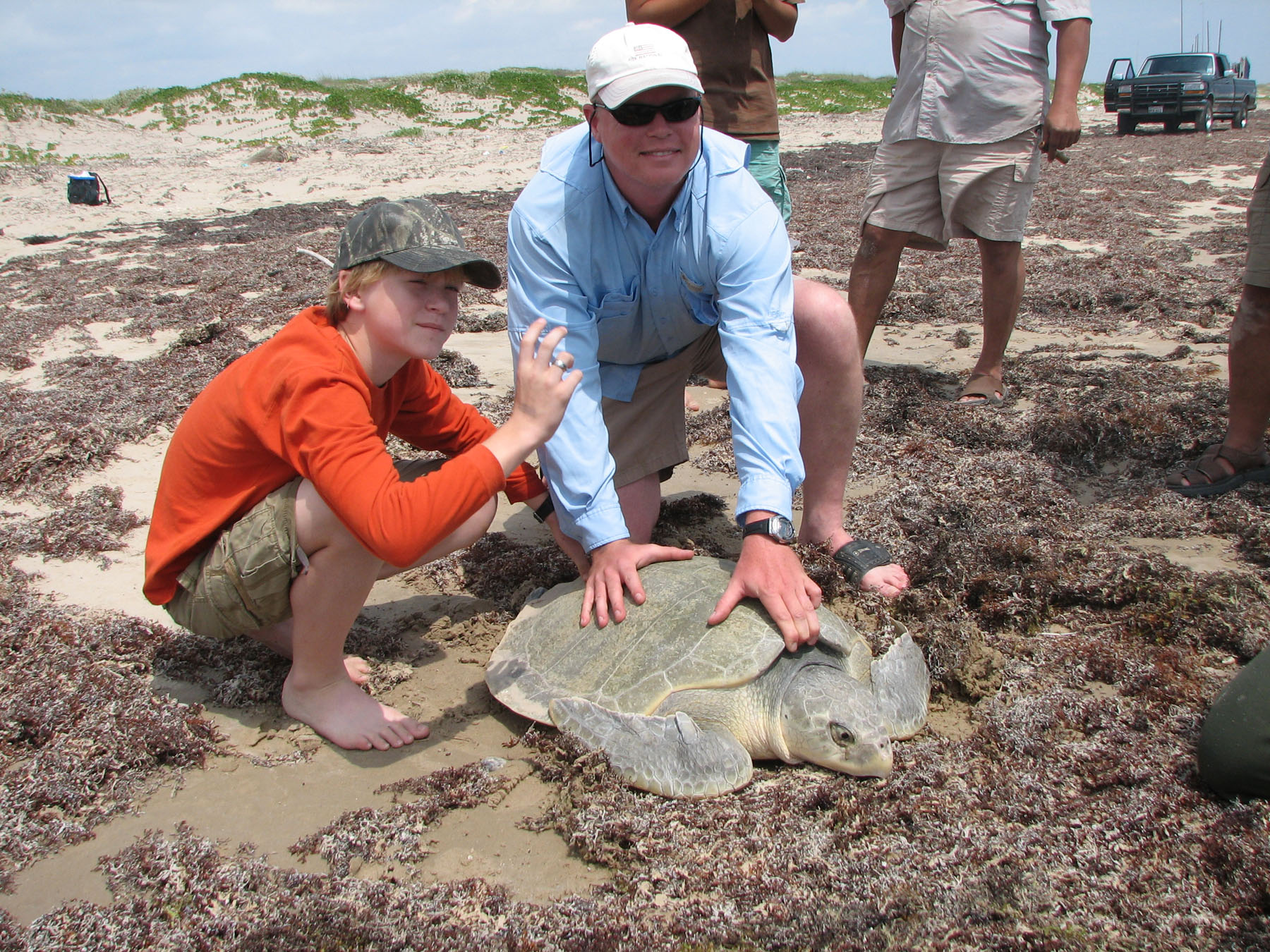 Jeffrey and Austin Wolda of Bulverde, TX. with a nesting Kemp’s ridley sea turtle on PINS beach – 19 May 2007.

My entire life has been focused upon the search for high adventure and to feel the adrenalin pumping through my veins like the flow of seawater between coastal jetties. It has always been that way with me. Turning 60 years of age has only increased the desire for it.

For eight years now the sargassum has made life miserable for surf fishers during the first five months of the year. As of late May it is making driving conditions on the beaches of PINS horrible and often doesn't allow fishing at all. Attempts to fill this time frame with traditional bay boat fishing charters has not proven successful; especially since I have no interest whatsoever in "croaker soaking meat haul charters." I love trout and redfish, but my interest is in big fish rather than numbers. Whenever possible I prefer to use artificials.

My favorite is big game style fishing for tarpon, sharks and large jack crevalle on all types of tackle. I have worked to formulate a plan for increasing my number of charters that would focus on big game fishing when conditions were not conducive to fishing in the PINS surf, but a piece of the puzzle was missing. Then the answer showed up in 8' seas on the PINS beach one night with various federal law enforcement agencies in hot pursuit. The answer was a 25' Mexican Panga carrying 3,000 pounds of marijuana, three 55 gallon fuel drums and 4 Mexican nationals.

It was true love at first sight and I knew she was the boat I had yearned for all these years. Narrow beamed, fast and exceptionally seaworthy; the Panga is utilized worldwide by commercial fishermen, inshore and offshore, and is designed for maximum results with minimum maintenance and horsepower. I spent 1 years attempting to procure such a hull but I could tell that this particular boat exhibited a higher grade of workmanship than others I had seen.

Then out of the blue a friend called to tell me such a boat was being auctioned off by the U. S. Marshall's Service locally. Upon investigation I was amazed to find it was the same boat I had yearned for so long. I bought it at auction and after four months of extensive outfitting for increased comfort, safety and big game fishing; I had spent a small fortune and launched her on 23 May.

Richard Ridgway of Boat and Outboard Repair in Flour Bluff; (phone 361-946-1751), did a bang-up job of rehabbing the Yamaha 200 HP V6 outboard and John and Wanda Hobbs of John's Fiberglass Specialty and Boat Repair in Port O'Connor; (phone 361-935-4323), did a fine job of decking, building and installing the custom center console, fuel tanks and storage compartments. John and Wanda rebuilt and re-rigged the boat in a very timely manner. Both of these companies were a pleasure to do business with and I would recommend them to anyone in need.

Long time readers may remember a story I wrote a while back about my papa and me encountering a very large lemon shark on the south shoreline of Copano
Bay at night when I was a small boy. Since then I have never doubted the presence of various-sized sharks of several species being encountered in local bay systems. On 18 May, 2007, Randall Rickerson landed a 9' bull shark that weighed 513 pounds in Lydia Ann Channel near Mud Island in Aransas Bay. This fish is a new pending state record for the species and has stirred lots of interest from wade fishers. Imagine that!

After the appearance of a mako on the shoreline of Corpus Christi Bay near Texas A&M last year that was reported to have been hooked earlier by bay fishers near Mud Island, biologists are pondering the abundance of large sharks in our bays. Studies are underway to see if this is a "new" behavior due to climatic change or a long overlooked one. Personally I much prefer to report data than read it and it has occurred to me that this is a wonderful opportunity to offer an unusual type of charter in our bay systems.

The Mexican Pangas are known by the common name of "shark boats" and that is what many of them do for a living in the open sea around the world. So with an upgraded version of the right craft for such an endeavor, I will be offering artificial only wade-fishing charters for trout and reds for up to 5 anglers and big game fishing charters utilizing various tackle and techniques and targeting tarpon, sharks and large jack crevalle for up to 3 customers in bay systems as well as nearshore Gulf of Mexico in addition to my regular PINS surf charters.

The Panga brings new opportunity and I will be taking advantage by expanding my bay charter services. I will be offering charter trips from West Matagorda Bay to Port Mansfield. Espiritu Santo Bay is simply too well known for large tarpon and West Matagorda Bay is too well known for large numbers of large sharks to miss the opportunity of experiencing it firsthand and being able to share these fisheries with customers. It's going to be exciting to offer multiple day packages with different agendas and targeting totally different species back to back.

I have been interacting with bull sharks for over 40 years and have upon occasion been able to target specific individuals that have become territorial in a particular area. Cool stuff. Usually we catch it, although it may take a few days. An interesting thing I learned was that when you catch, tag and release an adult bull shark it immediately leaves the area and is not encountered there again.

Think about that a minute. Not only are we doing some high adrenalin catch and release big game fishing in bay systems and furnishing data to the scientific community but, we are also removing a very real threat to local wade fishers without even having to kill the shark. If that ain't a win-win situation I don't know what is.

No shark will be intentionally killed on these charters and we will always keep the safety of wade fishers in the area foremost in our minds while engaged in bay shark fishing. The ordinary has never appealed to me; just ain't my nature. But this scenario sure does. I would not recommend this for the faint of heart or infirm of body but those who would like to experience a genuine grand adventure just give me a call. What a hoot!

Be Careful, Be Courteous, Be Kind... Capt. Billy L. Sandifer