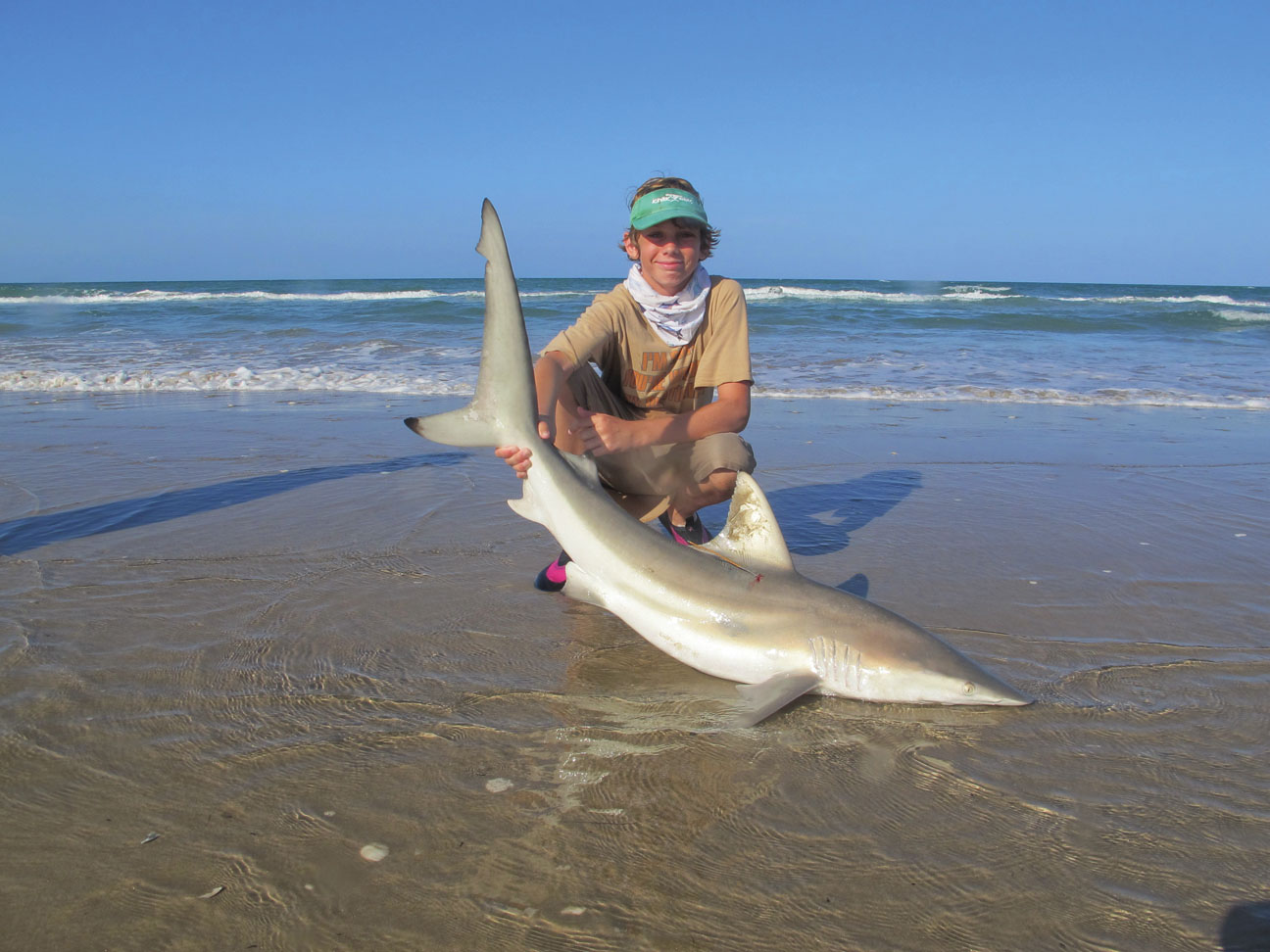 Warning! Shark fishing may be hazardous to your health, your marriage, and your bank account.

No question, 2014 has been the toughest year on surf fishermen in some time. Incredible mats of sargassum arriving nearly non-stop have made it impossible to fish kayaked baits much of the season. For decades I've preached that sharks could be caught in the first gut on casted baits but only a few anglers heed these words and most think it is an absolute necessity to kayak the baits farther out to have a chance at catching a shark. James Clark and his fishing partner, Dani Zirkel of San Antonio, are the exception and have had a stellar season casting baits while the kayak crowd has for the most part waited for the sargassum to subside.

James' and Dani's year-to-date total catch is 45 sharks; ranging from a 44-inch bonnetnose to a 7.5 foot bull. The fish have averaged 5'-2" length and 31 of them were caught on casted baits. Jeff Wolda is having troubles with sharks while fishing light-tackle in the surf, and all the while most shark fishermen aren't even fishing. What a hoot.

Recently James got bit on the calf by a blacktipped shark he had just released and I queried him concerning the incident. The following is his direct quote.

"Yes sir. Released it and it turned and swam a circle around me. No question, all it wanted was to bite me. Followed me to shore and beached itself behind me. Dani had no clue what 'It got me' meant so she released it with no problems. Never had any shark turn on me like that on purpose. I've had my hands on between 300-400 sharks in my 14 years on the sand. I've got a few nicks on my fingers from teeth but never thought one would chase me down."

Personally, I have no trouble whatsoever believing James' story. Some years ago I released a 5' 1" bull shark and it swam 20 feet offshore, slowly turned, slammed its tail on the surface several times, and then charged me going full blast. It hit me on my left shin so hard it knocked me down in the water and raked my shin with several teeth. Then it lay beside me too exhausted to move. My leg got infected and I had quite a bit of trouble with it. Upon another occasion I had a big bull shark chase me to the point it beached itself and fell over sideways on the sand. These are dangerous predators and the utmost of care must be used when handling them.

Many years ago I was planning a shark fishing trip of several days down to the mouth of the Rio Grande and SPI and was looking for a fishing partner to go with me. I found one on Bob Hall Pier and made arrangements to pick him up at his home the morning of the trip. When I picked him up his wife made it clear, in no uncertain terms, that if he went she'd be gone lock, stock and barrel when he returned. He shrugged it off and when we returned several evenings later the locks had all been changed. A spotlight revealed the house was without furnishings and a 2X12 was nailed across the garage door. A couple of years later I ran into him at a tackle shop and inquired of his marital status. He replied that the only time he had seen her since was at the divorce proceedings.

As you can imagine shark fishing has changed dramatically since my first exposure to it in 1959. It was the poor man's big game fishing and most often was carried out from piers, the jetties and the beach. Rather simple tackle and techniques were utilized and as many accessories as possible were handmade. Fighting belts were apt to be aluminum street signs with outdoor carpet glued to the back for padding. Baits were deployed using swim fins or inner tubes, sometimes a vinyl or rubberized life raft.

The vast majority of sharks caught in those days were killed for their jaws. Today the majority of sharks caught are released and all aspects of the equipment used has undergone many upgrades; from multi-speed reels to braided line to sleek kayaks for deploying baits offshore. One of the biggest differences is the tremendous increase in the number of anglers seeking sharks. An educated guess would be there were never more than 100 serious shark fishermen in the 70s, and now Sharkathon will have over 600 contestants in a single day. Thank God they are releasing their catches nowadays.

Another major change is the tremendous amount of information readily available concerning fishing for sharks compared to the trial and error methods of bygone years. I am only going to address shark fishing from the beach rather than attempt to cover all of the various places and means of angling for them. Let's start modestly and we'll work our way up to visions of grandeur.

Today's modest outfit would be reasonably-priced medium-sized reels capable of holding 350 yards of line and 10 foot rods. These can cast baits from shore or they can be taken farther out using some flotation device. A word of caution–despite the temptation, never take your bait out so far that you will not have enough line remaining in the reel to restrain a shark's run. And–do not put heavy leaders and huge baits on small or medium-sized reels. You do yourself and the fish a great disservice by doing so as you'll not be able to hold him and you condemn him to slow death wrapped in 30 feet of leader.

A short piece of nylon rope with dog snaps on either end (a snap-in rope) is ideal for cinching around a shark's tail and working it up onto dry sand. Shark skin is very abrasive and wearing slicker suit bottoms is an ideal way to avoid getting road rash while handling sharks.
Ideal bait is whatever the fish are feeding on in the surf at the time. Whiting is good and a bonus is tarpon, jacks, big specks and reds, king mackerel and other medium-sized game fish will eat them as well as sharks.

I find that dart tagging tools do a poor job on average and I carry a small dagger in my tagging kit to pre-start a hole for the tag.

Take the time to learn to identify the various shark species. Different laws apply to different species so it is necessary to be able to identify each positively. If a fish is being kept for food it should be bled promptly and put on ice.

Now the bigger your target gets the more complicated the entire process becomes. Obviously the more food chain activity that is taking place in an area, the better your odds of a really big fish being present. However, with all this feeding taking place this is also greater probability that smaller and also very toothy game fish also abound and can cut your line several times in one day. This calls for marker buoys on your leaders so you can retrieve or retie your line.

Always place your baits that are deployed farthest offshore well up-current of the close-in baits so the floats can clear your other lines without tangling.

The very good rule of thumb says your leader must be as long as the biggest fish you wish to catch.

When rigging a large bait and the hook is lying where you want it, drive a nail through the eye of the hook into a bone so the hook is firmly set in place, perpendicularly, and will not simply lie alongside the bait.

Always remember that shark fishing from the beach can be a dangerous game–in more ways than the obvious!

If we don't leave any... there won't be any. Billy Sandifer