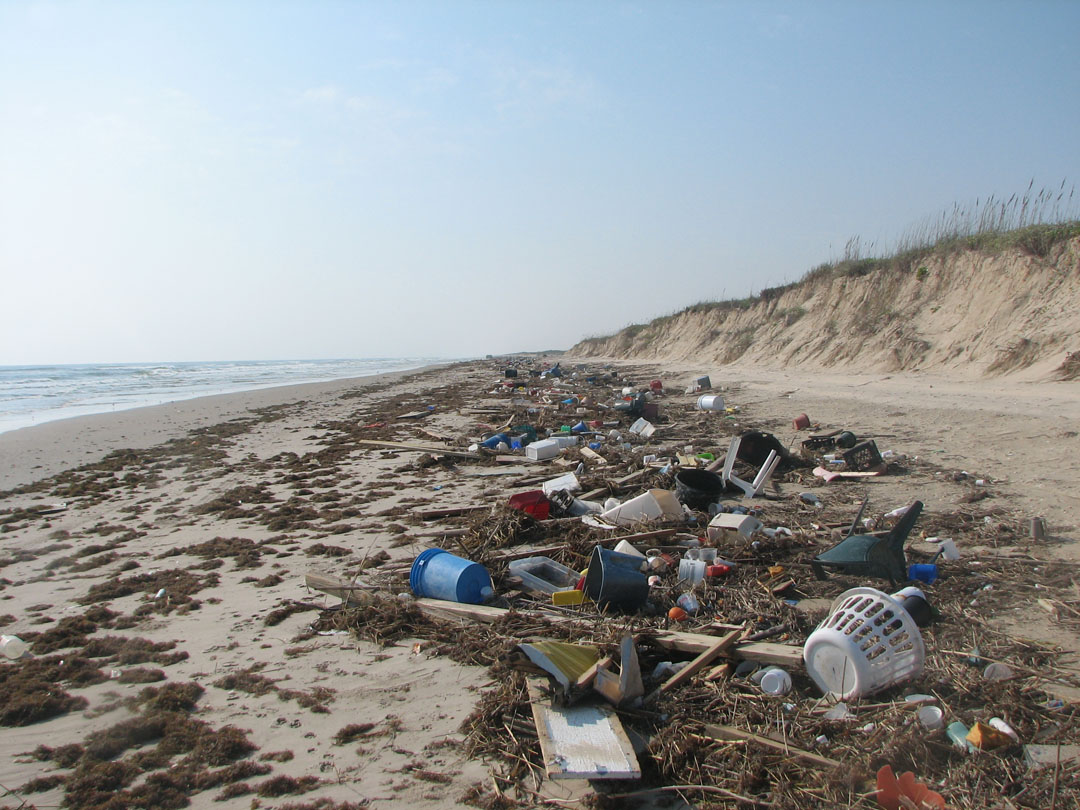 I have lived through four hurricanes and one very bad typhoon in my lifetime and my heart goes out to all of our friends and neighbors impacted by this monster of a storm. I sincerely hope everyone in the Corpus Christi area knows how extremely lucky we have been to escape a major incident so far this season. But it won’t always be that way. We all get our turn in the barrel if we live in the coastal zone. As I looked at all those storms in a line headed west I told my wife I felt like the Texas coast was a dart board this year with Mother Nature throwing one dart behind another at it.

We are not without fallout from Ike here in the Coastal Bend. We’ve had hard NE winds day after day with rough seas and the water has been to the dunes much of the month so there sure hasn’t been much beach fishin’ goin’ on. Tremendous amounts of debris have impacted all of Padre Island as I’m sure it has the entire Texas coast and Coast Guard reports indicate there is a lot more currently headed this way.

I recently received an inquiry from PINS personnel wanting to know if it would be possible for me to organize a cleanup to remove as much of it as possible and I sadly told them that it was not feasible. Too many large items, too many fabricated wooden structures that would have to be taken apart, and the amount of wood and other debris is probably the greatest amount I have ever seen on our beach. Nature will have to take its course and then we’ll see what we can do on the spring Big Shell Cleanup.

We’ve had tide to the dunes for four straight days and much of the wood will be pushed by the high water to the edge of the dune line. This will continue throughout the winter whenever we get strong northeast or east winds. Blowing sand will cover much of the debris and coppice dunes will form over it. This is the natural process which the beach uses to rebuild itself. But boy if it ain’t a circus right now. PINS is asking that everyone using the beach take out as much trash as possible and this will help. I could have stacked a large flatbed trailer high with ornate lawn furniture and high-quality lumber last Sunday. So, if you need some building material there’s an alternative to the lumber yard; make a run to the beach and pick out what you need.

Driving in this debris is going to present real problems for beach drivers. Stay in the tracks of other vehicles that have passed through before you, carry lots of "fix a flat" and speeding won’t be an issue for a while as speeders will have flat tires in a short period of time. A small air compressor that plugs into a cigarette lighter and a plug kit are also recommended. If you see a board full of nails in or very near the existing roadway take the time to move it out of the way in the direction of the dunes. If you don’t you might be the one that runs over it and flattens tires on the way back out.

Another new rule has been announced by PINS. Anyone bringing construction materials (big or small) into the park needs to secure a $50 permit in advance. You cannot bring in material the day you purchase the permit and it takes a few days to get the it processed. For information concerning rules on PINS I suggest visiting their web site at www.nps.gov/pais .

There are also large quantities of ground up vegetation in the surf and these are going to make fishing tough. Whenever possible avoid areas which appear black in color. This is more apt to be masses of decaying debris than baitfish. We were in such a spot recently and large numbers of dusky anchovies had sought cover in the debris but predators were working them hard in spite of it. The only way that we could fish in this area was with surface or shallow running lures. It was impossible to fish with bait or any deep running lure.

The reds have been very picky so far this year. One day they want live finger mullet and the next they won’t hit a live bait but will readily take one cut in half. The cure is to use a two-hook bottom rig and fish a live finger mullet on one and half a finger mullet on the other. Once you determine which they prefer you can fish that choice on both hooks.

The November surf has a reputation for producing large fish and often they are hooked on tackle most would consider too light for landing them but that is not necessarily true. When you hook that "freight train" hold the rod high and keep a good bend in it to make the fish work harder. Make sure your drag isn’t set too loose following the strike or the fish will build up a head of steam and take so much line that you’ll be left with too little to fight him properly.

Instead, tighten the drag at the beginning of that first run and make him work for every inch he gets. As the spool diameter decreases, which means more tension on the line will be required to slip the drag, loosen it as necessary to prevent him breaking the line. The most common mistake anglers make with spinning tackle is cranking while a fish is taking line or when no line can be gained. This practice actually has the effect of loosening the drag setting and results in line that is so badly twisted as to be worthless after this one encounter.

Again, keep the rod in an upright position during a run. Any time the fish stops taking line, lower the rod toward him while cranking to regain line. When the rod tip is pointed at the fish, slowly pull it back up to vertical, pulling him toward you without cranking. Then slowly lower the rod while cranking back down on him. Repeat the process until your fish is landed. All big game fishing is done this way around the world.

I had a real interesting deal happen in that black spot I mentioned finding last Sunday; there was a very shallow wash area for some distance from shore, about eight inches deep. One of my customers was out on the edge of the drop-off standing in this shallow water casting for jack crevalle. I was tying on a new leader for his son at the truck and we casually looked up to be greeted by the sight of a 6-1/2 foot shark ten feet behind (shoreward) of his dad and headed straight for him. That shark was swimming in that eight inches of water and for some reason had homed in on his dad. It actually bumped him hard on his right calf with its nose. Scared heck out of everyone including the shark which threw water sky high making a hasty retreat. Buddy, that was a spooky deal and it sure makes one realize you can never let your guard down in Mother Ocean.  What a Hoot!  Be careful, be courteous, be kind!