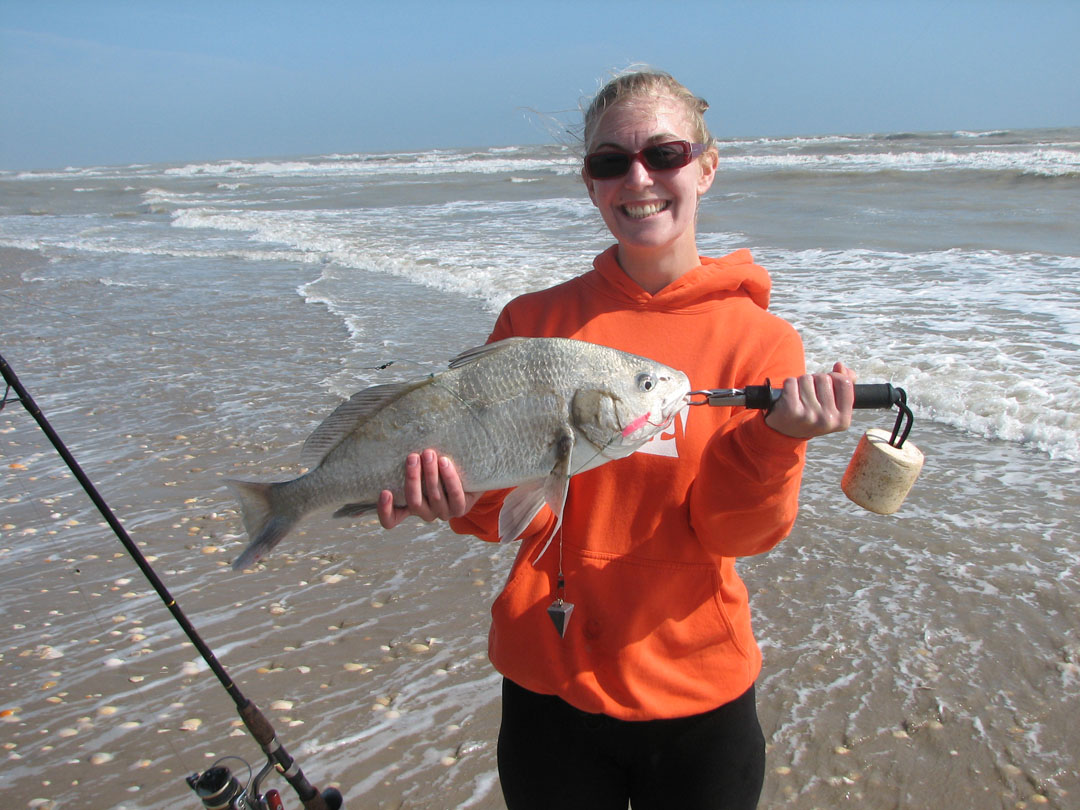 Chelsea Aldridge, Interpretive Division Park Ranger at PINS, first black drum!
It tickles me to realize that with all the negative stuff surrounding every aspect of our lives currently; in thirty years some nut will be referring to this time as "the good ol' days." This is just the nature of our species.

I recently learned that 26-year-old Ryan Gregory, of Austin, is battling for his life with Stage-4 cancer. His parents, Stephen and Donna Gregory, are well known and treasured friends to many in the surf fishing community. They very graciously donated $7,750 to Friends of Padre, Inc. for the purchase of this year's Big Shell Beach Cleanup tee-shirts and support for the continuing Hurricane Ike debris removal efforts by NPS on PINS. Ryan and his mom and dad are in my daily prayers and I ask that they be included in yours as well. While some folks steal the air they breathe, it really hurts to see upstanding and caring "walk the walk" types like the Gregory family in such a situation.

Last issue I advised readers the speed limit on PINS beaches had been lowered from 25 mph to 15 mph effective 1 April 1 July as these were the dates I had received verbally. Turns out this is wrong. The 15 mph speed limit will be in effect 1 April through 31 July. The main reason this was done was to protect nesting Kemp's Ridley turtles from harm by vehicles although there is no record of such thus far in the 47-year history of PINS. Ridley nesting season typically ends in early July and patrol efforts usually end by the middle of the month. Visitors are urged to be observant for nesting turtles and report them to 361-949-8173 ext. 226 or 228 or 1-866-887-8535. Beach travelers might also try CB Channel 1 to relay turtle information.

Speeding on PINS is not new problem and I have discussed it in my articles here and on internet message boards. For years I and others have begged that visitors police themselves so that more restrictive measures would not have to be implemented. However, the honest truth is that far too many people either don't care, don't know, or don't listen and drive the beach like a bat out of Hell.

My genuine feelings are that those who refused to obey the 25 mph limit are even less likely to obey the new 15 mph limit. Logic and common sense would dictate greater enforcement of the 25 mph; not a reduced limit. Incessant strong wind and very high tides have had us wishing we could drive as fast as 15 mph here lately but as conditions moderate in summer the new speed limit will impact visitor usage negatively. It's got to be a genuine nightmare trying to manage the well-being of the resources while considering the needs of the user group and I do not envy NPS management.

The first three nesting Ridley turtles were found on April 16th and as of 8 May fifty nests have been found on PINS. Friends of Padre, Inc. donated $2,525 to PINS for a beach wheel chair to replace the one that was stolen last summer. FoP, Inc. also donated $20,500 to PINS to aid in their continuing efforts to remove Hurricane Ike debris. I know they are and will continue to do their best, but the lower speed limit is impacting their beach driving the same as visitors. I remain extremely impressed with the work that Facilities Manager, Larry Turk, and his maintenance crew have done. I'd like him even if he wasn't a card carrying Cherokee.

Last month I mentioned the sharp decline in nesting and usage of historic rookeries by colonial waterbirds. I told you that two active rookeries remained in Redfish Bay. Well, during the past weeks these have been abandoned and are now inhabited only by gulls. Unusually low nesting activity is occurring at most sites however it is unknown whether this is a result of human encroachment or the current drought. I am certain a good 3" rain would improve local fishing. In the land of the hyper-saline bays and limited freshwater inflow a soaking rain can work wonders.

I've been spending far too much time watching fishing shows and I have a couple of new pet peeves. I see professional crews cutting leaders and leaving hooks in released fish without the slightest attempt to remove them. What's up with that? Do they figure the fish need a bit of steel in their diet? Sure sets a bad example and I wish their sponsors realized it. The other thing is that they show folks hand-grabbing fish boat-side and thus removing protective slime which could lead to  post-release infection. What really cracks me up is that after they handle the fish extensively they grab the Boga Grip for further filming. This makes no sense.

By the way, while many already know, there are undoubtedly others who do not so I'll mention it here. I was taught decades ago to never use a landing net on trophy trout that I intended to release. I don't even carry a net when I wade. I use the Boga Grip and before they came along I collared fish by hand, touching them as little as possible. I now consider this a poor second choice to the Boga Grip. While the Boga Grip is expensive; there are similar, less expensive alternatives.

By the time you read this I will have been involved in quite a bit of shark fishing targeting large bull sharks. The Harte Institute of Texas A&M Corpus Christi will be kicking off a research project very soon with one of the goals being to catch ten bull sharks over six-feet and tagging with transmitters to learn more about their movements along our coast. I have been advised they want to utilize my services. Bull sharks, ranked as the most dangerous to man, are dangerous and extremely tough creatures to deal with. Ah, my favorite; high adventure and maximum adrenalin fix all rolled into one. I am really looking
forward to it. The way it's been around here the past few months I am sure in need of both; especially when there's a paycheck included.

Once again I'm mad at my log books. I had decided this was beyond doubt the windiest and most hateful spring weather of my life so I dug through my log books for confirmation. As often happens, I have determined that in reality it's not that much worse than other years. After all, we live in Corpus Christi, the windiest city in the U.S.A. What is different is the harshness and duration of the drought and I heard on local news recently this is the driest it's been here since the mid-1950s. My ol' papa told me when I was a small boy that extended periods of drought went hand in hand with extended periods of high wind. He also said weather that was good for farmers was likewise good for fishermen. From what I've been able to observe he was spot-on with that statement. Regardless, 2009 has certainly been a harsh and troublesome year thus far. We gotta' have tough times or we get spoiled and take the good times for granted.

This month marks one year that this old chain smoker has been without a smoke. And if that can happen anything is possible. Heck, I might even get a few charters. Y'all hang in there, quit worrying and go fishin'. In a thousand years no one will know the difference.

If we don't leave any there won't be any.