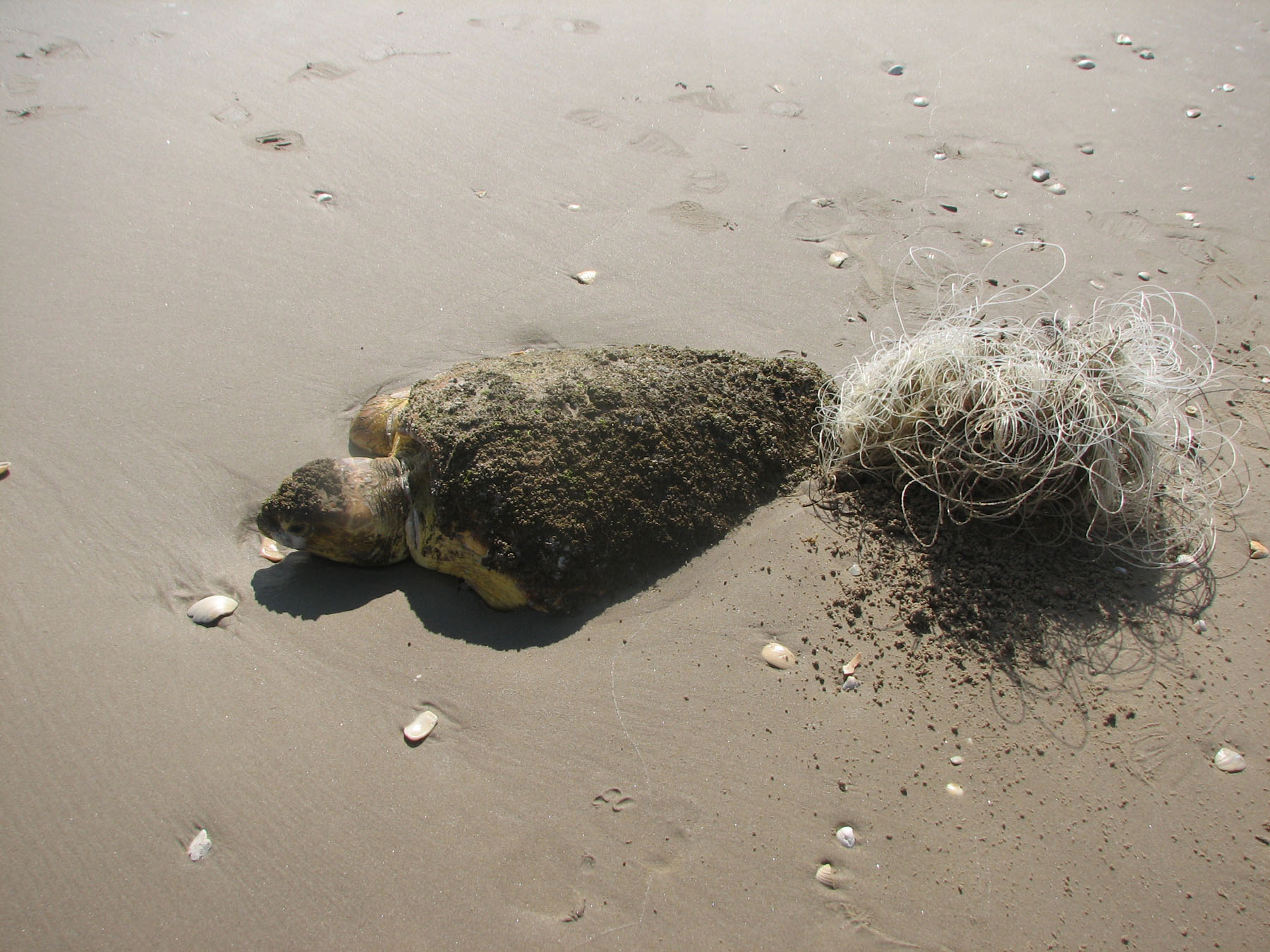 S ea turtle being buried alive by sand on incoming tide. It was tangled in heavy monofilament, possibly from lost or abandoned longline fishing gear.
There are certain unavoidable laws of nature one learns concerning surf fishing if he does it long enough. One of these laws is that any time there is a tropical low-pressure system in or near the Gulf of Mexico the catching suffers dramatically regardless of all other conditions.

September was far below average catch-wise and that would figure as we had one low-pressure behind the other in the Gulf throughout the month. As of early October many species have still not started their seasonal migration. When one takes the low-pressures into consideration and adds the unusually warm weather that has continued throughout the month the reason becomes clear.

Unfortunately, knowing it does not give an angler the power to change it, but at least now you know why. This will most probably lead to some exceptional fishing days later in October and continuing into November. I am predicting lots of fish making up for lost time but the peak of the activity will be shorter in length.

Large amounts of sargassum have continued to impact the shoreline of PINS since my last writing. The short-lived and fast moving tropical disturbance that started down around Brownsville and impacted the upper Texas coast as Hurricane Humberto seems to have thrown every single piece of sargassum left in the Gulf at us and has made for some miserable conditions all around. I’m told that 2007 will go down in the record books as the "year of record" for the amount of sargassum to impact our beaches since record keeping began back around 1980. Old timers say the worse year they could remember was 1968 when the pesky hydroid remained knee deep for twelve straight months. I can’t verify that as I was in Southeast Asia pursuing a different target.

I know most things in nature run in cycles and I keep hoping that the current annual increase in the presence of sargassum will dwindle but it sure hasn’t shown any sign of letting up whatsoever for the past five years. Each year is worse than the year before and as a hunter/gather it is this trend that troubles me. Short-term it is changing the way we do business in the surf zone and it has forced me to make some changes in my charter services. I’ve always offered several types of surf adventures and among these are light tackle fishing and shark fishing trips.

Customers book a prime weekend for shark fishing and then here comes the sargassum. We reschedule the trip but the upshot is that I lose an irreplaceable weekend charter. Light tackle fishing might have been exceptional that day but shark fishing wasn’t possible. The worst of it comes when the rescheduled date is also awash with sargassum and we lose that one too. First thing you know I have lost as many as ten Saturdays trying to take that one party shark fishing and haven’t gotten it done yet,  while at the same time those were ten irreplaceable and much in demand dates could have been used for trout fishing or angling for other species.  Business-wise it doesn’t make a bit of sense and financially it is devastating. Especially when I have a very seaworthy 25' Panga sitting in my yard.

So, a change in the way I conduct my charter business is necessary. Those wishing a shark fishing only charter are welcome, and we may end up running a traditional surf outing, but if we are plagued with sargassum we may end up in the gulf or bay doing our shark fishing from the Panga. If we can do neither I will continue to reschedule charters. I also want to announce that I will be offering gulf charters for sharks and other species on the Panga throughout the winter months as well as bay charters whenever the weather permits.

The Fourth Annual Sharkathon was held on PINS on 8 and 9 September. A total of 370 anglers entered and the largest shark prize money was won by Shawncy Perez with an 83" bull shark. This is a catch and release only tournament and I dearly wish other tournaments would adopt this format. There was quite a bit of grumbling on internet message boards about trash left after the event and I want to clearly state here and now that they were false. I saw two minimally trashed camp sites following the event and have no way of knowing if they were in the event or not as it was a busy weekend on PINS. Far more trash was left the following weekend by your regular campers than during Sharkathon.

My one peeve with the Sharkathon event is the blatant blocking of the beach by a large percentage of their campsites. I have contacted organizers of the event concerning this problem and they are already working to alleviate this issue during upcoming events. The blockages are simply to make things more convenient for the contestants in these camps and it is at the loss and hardship of all other beach travelers. Although it seems to be becoming the norm among young shark fishers to block the beach it has never been acceptable; it’s wrong, and it’s disrespectful to others who have as much right to use the resource and travel there as shark fishers do. If this event is to continue to receive my support this matter must be dealt with. I commend Sharkathon organizers for once again donating $1,000 of the proceeds of the event to the "Park Watch" program designed to help stop violation of game laws, vandalism and other illegal activities.  Unlike Sharkathon, there will soon occur a San Antonio-based tournament on PINS and this one has a long record of being totally without saving graces and I yearn for the day it is totally displaced by Sharkathon.

National Marine Fisheries Service has conducted several little-publicized public meetings concerning proposals to enact "zero take" of several shark species by sport fishers while commercial shark catch quotas will remain unaltered. What’s up with that? There appears to be no concern for the well-being of the resource whatsoever in these proposals and certainly no concern for the general citizenry who pay their wages. Presumably their chief concern and desire are only to protect commercial fishing. We all are aware of the decline in shark numbers worldwide; but this is due to overharvest from commercial longline fishing, not sport fishers. If it’s time for sport fishers to accept a "zero take" limit then certainly it is past time for a moratorium on commercial shark fishing until the affected species have a chance to rebound.

Charlie Golla encountered a 4½-foot alligator at the 6-mile of PINS on 9/16/07. He and I both contacted government agents and they captured the little guy on 9/20/07 and relocated him to a nice, deep, freshwater pond. First live gator I’ve ever heard of on PINS but down in "God’s Country" few things are really all that surprising. After all; Life’s a Hoot!

Be Careful, Be Courteous, Be Kind.