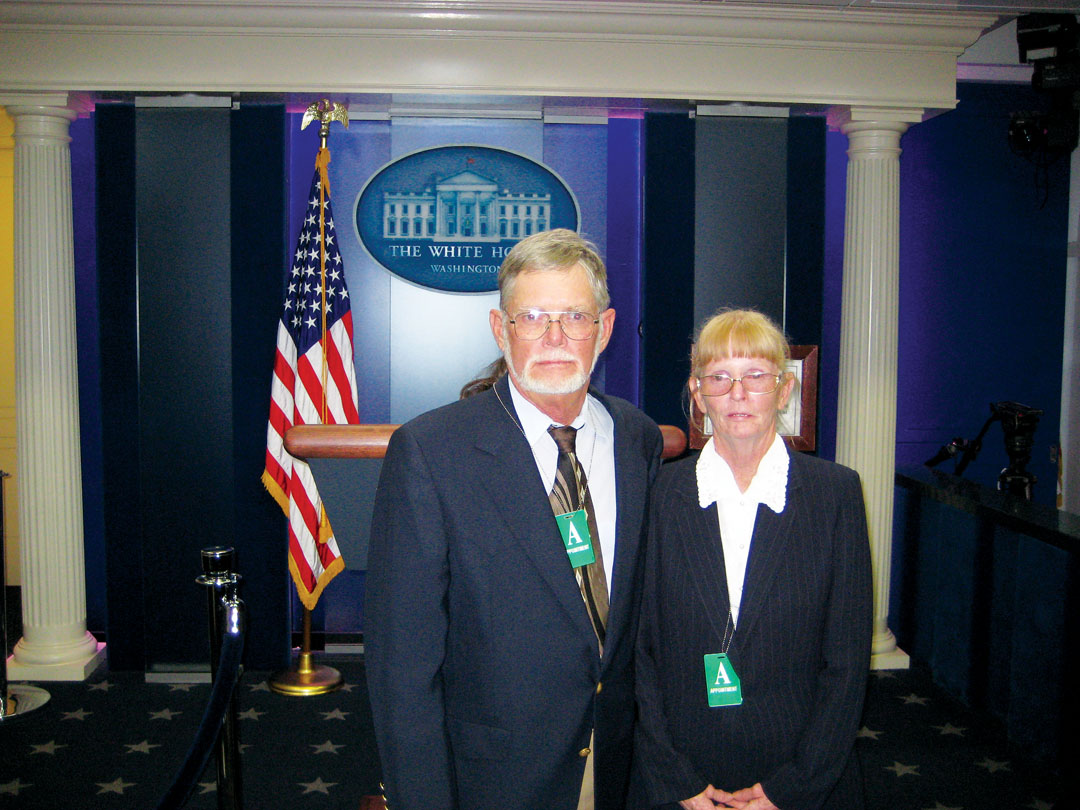 Joy and me at the White House.

What a chaotic month October has been. It started with us sight casting twenty-five pound jack crevalle with fly rods in the surf on Tuesday the sixth, followed by me being photographed wearing a gas mask among large numbers of red tide killed fish on Tuesday the thirteenth, and losing an entire week's worth of daily bookings to the red tide. Then the following Tuesday my wife, Joy, and I were given a private tour of the West Wing and Oval Office of the White House in Washington, D.C.

Although I felt greatly honored to have been nominated for the annual Field & Stream Heroes of Conservation Award and to have been selected as one of six finalists to attend their gala event in the nation's capitol; I never for a split second thought I'd win the grand prize although many enthusiastic supporters did. I've been around too long and was very aware that I'm too rough around the edges and too politically incorrect. Not being selected as the grand prize winner came as no surprise to me. But the six finalists were selected from hundreds of nominees and obviously all six were already winners - big time.

The monetary award the six finalists receive will be a real blessing with winter coming on. I casually mentioned in an e-mail to several friends that I was going to the award ceremony in D.C. alone and intended to keep the trip as short as possible. They inquired as to why my wife, Joy, wasn't accompanying me and I replied that we were not in a financial position to afford the expenses of her going with me. Within one hour, and despite both Joy's and my repeated protests, they had her a round trip ticket procured on the same flights I was on and shortly thereafter several of them showed up here at the house with additional spending money that they had collected for the trip.

Joy and I were both overwhelmed. We are of the traditional rural Texas culture where you never expect anything from anyone and are taught to be self reliant and to do without when necessary. In our lives we are accustomed to often doing without things others take for granted and life is at times harsh and hostile. No whining here whatsoever; just a statement of facts.

Decades ago I chose to follow a path without promise of any financial security and she chose to be with me through it all. Our benefactors finally got it through my thick head that as far as they were concerned we had earned it but it took a bit of getting used to. Many years ago; my ol' papa told me that if a man had more genuine friends than he could count on the fingers of one hand he was an extremely lucky and blessed man. After all these years of living a life where genuine acts of kindness have been few and far between it seems now they unexpectedly pop up continuously and I am humbled and overwhelmed and I thank all involved from the bottom of my heart.

I went to D.C. to represent the hardworking volunteers of the Big Shell Beach Cleanup with dignity and respect and in such a manner they could be proud of; not to win a truck, and I succeeded in that effort very well. The Big Shell Beach Cleanup got a lot of respect and attention in D. C. and I was able to make some contacts that could be invaluable to conservation efforts in the future. I had the opportunity to meet some really great leaders in grassroots conservation from other areas and share ideas with them and Joy has blisters on her feet from trying to see everything in D.C. in one day and some memories she'll always cherish. It's all good.

The red tide is in its seventeenth day on PINS as I write this. We have two cold fronts forecast to hit in the next three days and the water temperature has dropped ten degrees since the event began so hopefully it will soon disappear. Beach drivers beware Tire Puncture Alert - Those hardhead skeletons with protruding fin spines are going to be stacked up high on the beach all winter and make driving near the dunes virtually impossible except in the Big Shell area.

On September 26, the first Cleanshores Cleanup event took place in Port O'Connor with 1,820 pounds of trash removed from local shorelines. This event was organized and coordinated by Capt. Curtiss Cash Low Tide guide Service. For more info contact Curtiss at 361-564-7032. The next Cleanshores event is scheduled for March 27, 2010.

Sharkathon 2009 was an awesome event and the sharp-minded and hardworking organizers of this event set the standard for tournaments. They also filed for a Guinness World Record for the largest land-based Catch and Release tournament with a total of 583 contestants.

I recently spent a couple of nights camped down the beach and one night I noticed the flashing lights of the ranger patrol vehicles for quite some time a couple of miles south of my campsite. They stopped by to visit the next morning and naturally I asked them what had transpired and they frowned and said they had a drunken driving incident.

"Well at least you caught them," I replied. "They don't have to come down here to get dead drunk; they can do that at home."

One of the young rangers looked up at me sadly and said, "Yeah Billy; they could. They can even get as drunk as they want down here, no one really cares, they just cannot do it and drive."

The PINS beach is and has always been about families. I just cannot imagine 583 tournament contestants and their families camped on the beach and folks driving around drunk in the middle of them at night. Think about it; scary ain't it? May each of you have a happy holiday season filled with kindness.

If we don't leave any there won't be any. Capt. Billy L. Sandifer