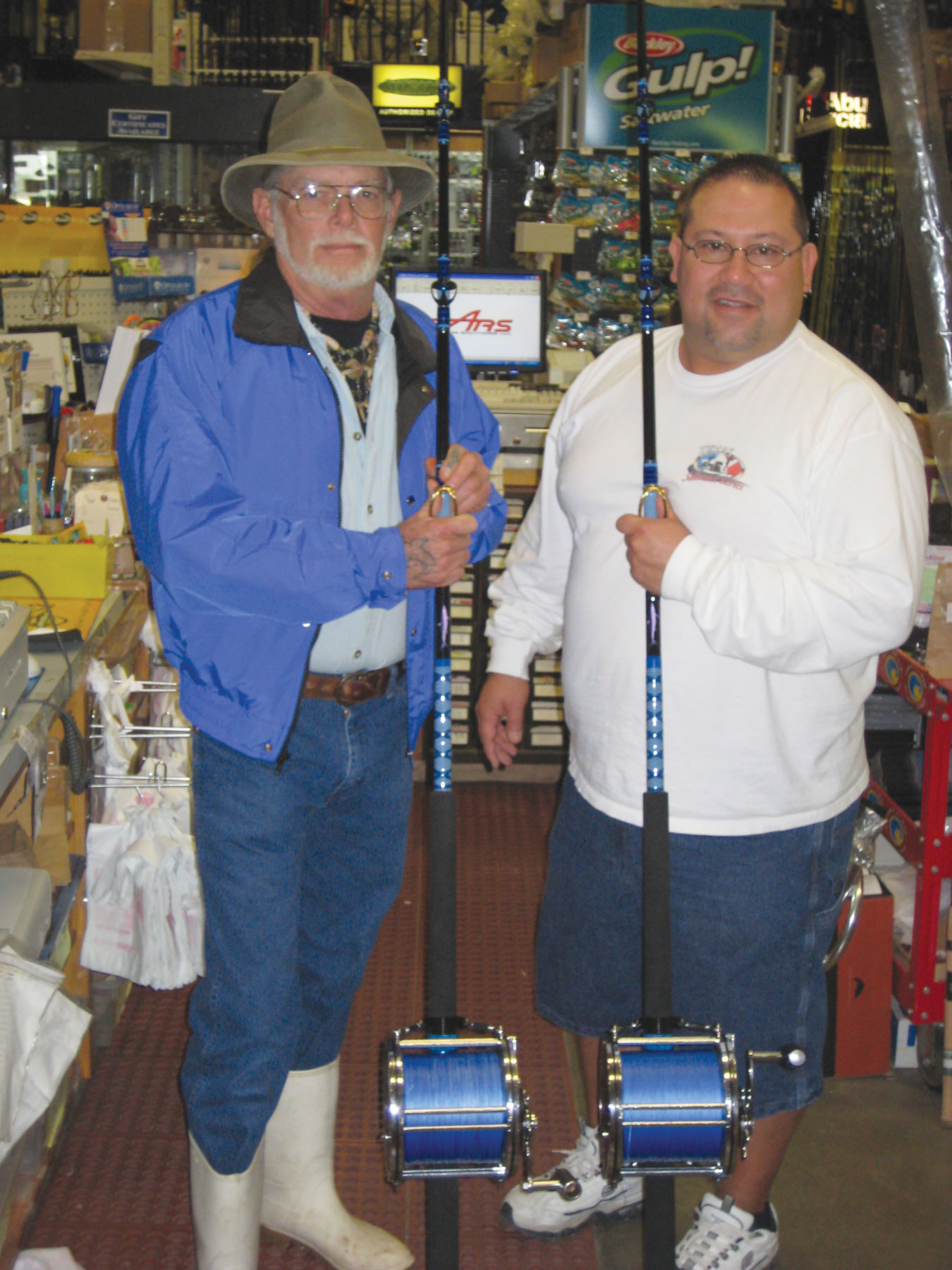 Rocky Guerra of Roy’s Bait and Tackle with the 16/0 rigs he built for me, time to go fishing!

Decades ago I fished expensive Dacron line on the largest reels made in order to be able to fish shark baits father offshore than other shark fishermen could from the beach. There were no kayaks back then and it would take hours to row each bait far offshore in a one man vinyl life raft. Dragging them back in was even tougher than getting them out if you didn't get a strike and if conditions allowed I'd paddle out to the floats on my leaders, cut the leaders off and put them in the life raft with me so I then had to only crank in line rather than heavy sinkers and big hooks plowing furrows in the sea floor all the way back. As time went on I bought a used 14' Zodiac with an outboard on it and it sure made life easier and the enterprise more practical. Still it was not without lots of problems and for a guy just sportfishing with no return on money spent it proved expensive. BUT, this tactic caught big fish; more than I've ever caught before or since.

When I started guiding on PINS 19 years ago I considered investing in an inflatable and an outboard but the overhead involved in operating a guide service on PINS leaves very little in the way of profit margin and there was another very real complication as well. My federal permit stated that I could use an inflatable and outboard for deploying baits but that I COULD NOT have customers in the inflatable. I knew right off that would create more trouble than it would ever be worth. In late summer and fall we can often see large schools of tarpon and other game species breaking the surface within sight of the beach. I could just see pulling an inflatable along the beach with gung-ho customers and then telling them we couldn't go chase the fish of their dreams three quarters of a mile offshore. And I couldn't afford to purchase an inflatable, motor and trailer; the money just wasn't available. So, I just filed it away in the old "wouldn't it be nice" category we all have and went on doing the best I could with what I had and being thankful for it.

Many of my customers are more like family than clients and Dr. Rollin Sarradet of Austin and his family have been treasured friends and fishing pals for the better part of two decades. Unexpectedly, Rollin e-mails me and wants to know if I'd be interested in a twelve and a half foot Sea Eagle inflatable with a 25-hp Yamaha and a trailer. He's been doing some upgrading lately and the inflatable no longer had any utility to him and if I can use it he'd bring it down and give it to me. Against my arguments he said he'd rather see me be able to get some good out of it than to just sell it and not long afterwards he delivered it.

There's been lots of changes on PINS under the newest administration and all of them are not negative in spite of all the negative press they get on internet message boards. I called NPS on PINS to inquire if there had been a change in policy about me being able to have customers on an inflatable as my last few annual permits had not stated such as earlier ones years ago had. After checking they advised me that they couldn't understand why that restriction had ever been in effect but that it was not in effect now and all I had to do was insure the inflatable and bring them the info and I was good to go. I bought 2 16/0 Penn Senator reels and had Roy's Bait and Tackle replace worn parts bringing them to tip-top condition. Roy custom built me two Jawbone 8655 8.5 foot rods that have some give in them instead of those old back breaking tree trunk rods we used years ago. Every single piece of hardware on the rods was specifically handpicked for it's effectiveness and durability. Roller guides were not used as they wear badly when running baits with an inflatable and require constant maintenance. Instead we chose Batson Forecast High Frame guides with high test zirconium inserts. Toughest material on the market. Roy Guerra did a superb job of wrapping both the guides and the decorative wraps. I've owned many a shark rod but these are the finest I've ever seen.

We then put 2,500 yards of Momoi Blue Diamond Braid on each reel with 130 pound test Big Game mono for backing. Each reel has at least 2,900 yards of line on it. My guess is these twin 16/0s are the only ones ever rigged in this manner. Sure, I know all about getting cut off, abrasion from sand bars and the other problems involved but I learned a many a trick over the years which I hope will help with that and the potential of these rigs is mind-boggling. There are other issues as well; not the least being that rod, reel and line weighs 16 pounds 14 ounces but before folks start up with how it's impossible to fight a large fish with a rig weighing that much it's appropriate to realize people were doing it when I showed up on P.I. fifty years ago and some have been doing it ever since. The largest fish I ever personally caught was a 746 pound Tiger that picked up a bait I'd placed 2,000 yards off the beach. I weighed 152 pounds at the time. These big rigs aren't for everyone but the inflatable will certainly be a blessing for laying baits with smaller sized rigs as well. And there's so much additional potential for the inflatable. The ability to fish inshore rocks for snapper in state waters and running and gunning on surface feeding game fish are the two that will probably be of the most interest but I have several other scenarios in mind as well. And obviously I can't think of having any better odds at getting a Beach Winter Mako than with these long rigs. I've got to get all of this figured out in my mind but I anticipate these trips will be available by the time you read this article.

I am going to be selective when booking customers for charters onboard the inflatable as obviously this is a bit "cowboyish." To take children or those in poor health on such outings would be to do them an injustice and possibly endanger them. I can assure you we'll be wearing life jackets. There are other issues to work out. One big one I've had problems with for years is that prime time dates are the stock in trade of a guide. So, customers reserve a date but have one particular type trip in mind. Then short term conditions make that particular type trip impossible although it's fine for other types of fishing and my customers want to cancel that date leaving me high and dry without a charter and to re-book a second date. I've lost as many as five prime dates to one customer without ever getting his charter completed. I go way out of my way to be fair to customers but I've got to figure out how to stop this as it's impossible to make a living like that. I have much more of a problem than other guides with this issue as most guides specialize in one or at the most two types of charters while I offer a wide variety of services. It'll all work out. Life's a Hoot; get out and get you some of it.

If we don't leave any there won't be any. - Capt. Billy L. Sandifer