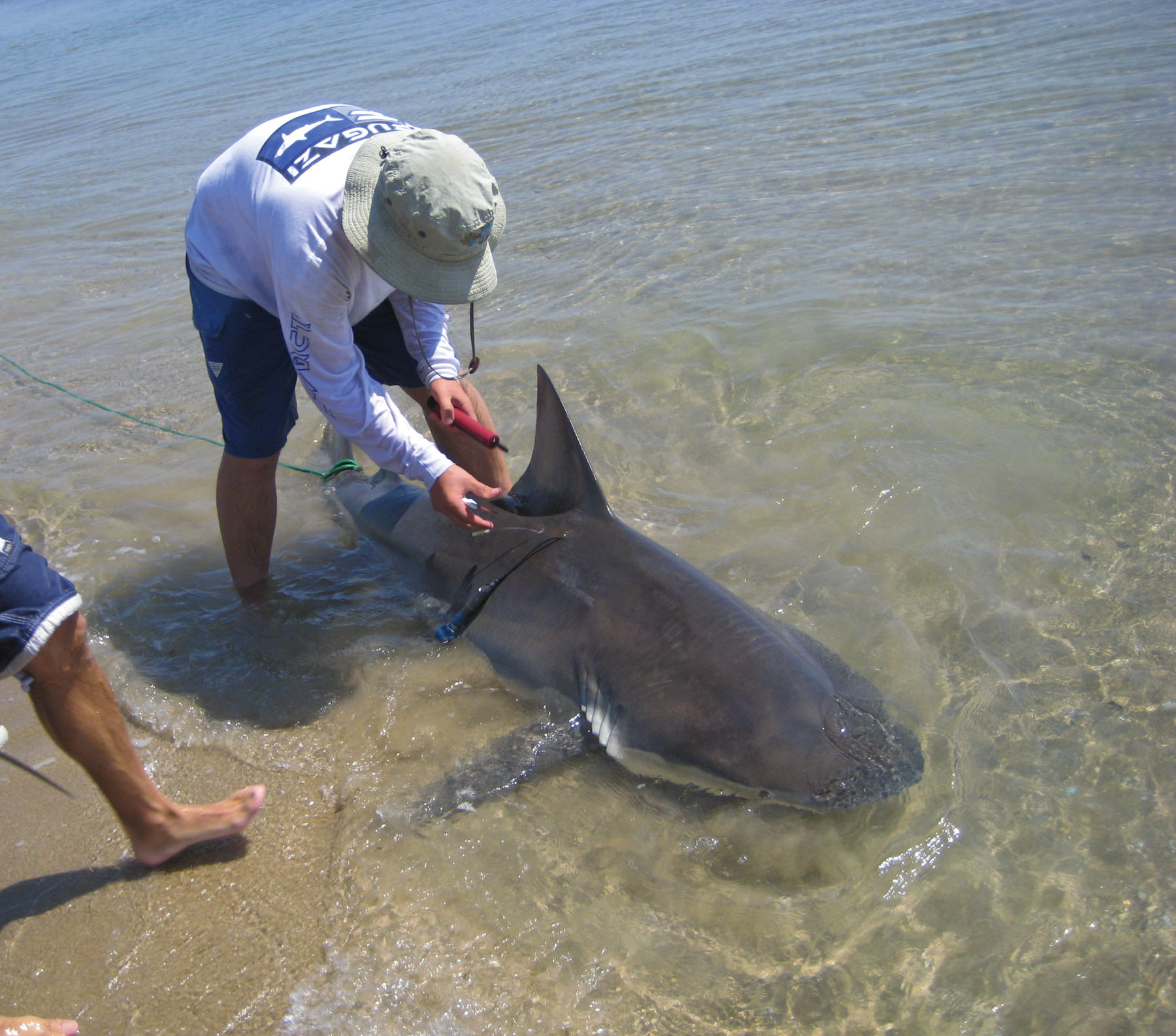 Todd Neahr, TPWD Fisheries Biologist, placing satellite tag in 8’-6” female bull shark landed on the PINS beach by San Antonio angler James Clark.
The 5:00 am weather forecast said something short and vague about there being thunderstorms moving toward us from the west but they didn't make any big deal about it. As I loaded the Suburban in the darkness I could hear the low rumbling of thunder far to the southwest but again I saw no reason for alarm. When it finally hit it came from northwest and caught my customers and me thirty-two miles down island. I figured I'd just drive through it as I regularly do and we'd start fishing south of it. After passing through several miles of heavy rain the storm seemed to split with us in the middle. Only light drizzle was falling and several times my customers ventured out and cast a few times but in each case abundant lightning and thunder sent them scurrying wisely back inside the truck.

By the time we reached the 41-Mile beach I realized the storm was huge and very probably extended the entire length of the island. I stopped to decide the most logical plan of action. We were going to have to wait it out somewhere and I just needed to decide whether to go back north or continue south. As the four of us looked out at the sea a thin, jagged lightning bolt came out of the sky and hit the water 250 yards offshore. We heard a "whoomp" as it impacted and a plume of water, smoke and steam rose into the air and lingered for some time. We were stunned by the spectacle we had just witnessed. We've all seen lightning hit the water countless times, but it is always at some distance from us. In 63 years this was the second time I'd actually witnessed it up close and personal. Trust me; it will give you a whole new perspective on the power of nature and the frailness of human life.

I have ran many times with numerous 122 mm and 144 mm rockets exploding all around me and that's what it looked like. As if a mortar, artillery round or rocket had hit the water. I can't imagine anything being left of a small boat or kayak this might have hit. There are obviously varying degrees of energy and electricity among individual lightning strikes and I fear I understand far too little about them. There's just too much about the Natural World to even think of learning in one lifetime.

The first time I experienced a lightning strike up close and personal was even more bizarre but obviously there was less electricity and energy involved. From 1974 to mid-1976 I ran the Harbor Police Division in Guantanamo Bay, Cuba. I lived on a 36-foot double-ended aluminum life boat I had rehabbed. A pal named Richard Bankson and I were shark fishing from it one night when a volatile squall caught us suddenly. Sheets of hard-driving rain and 70+ mph winds were on us with very little warning. I had to cut the heavy anchor loose as it was impossible to retrieve it in those weather conditions. As I fired up the engine, Richard was cranking in a Penn Senator 14/0 reel on a 7-foot Harnell rod. As I looked back at him from the helm a small lightning bolt hit the metal roller guide on the end of the rod and the entire rod and reel outfit along with his arms glowed an eerie sky blue color. It knocked him to the deck and I figured he was dead. I left the wheel and rushed to him and was amazed that he was already attempting to get up. As he reached out and took my arm to help regain his footing he calmly said, "Man, what a rush." We both busted out laughing. I cut the line at the end of the rod and told him to stow it below decks and then I got us underway.

That incident reminded me of the old cowboy stories about Saint Elmo's fire lighting up the cattle's horns and stampeding them. But had that low-energy hit Richard took have been the one we saw this past Tuesday I think the outcome would have been dramatically and tragically different. All of this makes me realize how much I've gotten away with in my life and probably a lot of you have as well. We push the envelope. It's our nature. But to do anything but immediately seek safe shelter with lightning present is like standing in the open totally unprotected during an artillery barrage. As I understand it if you are close enough to hear the thunder you can be hit by lightning. Think about it.

As of 20 May, seventy-eight Kemp's Ridley sea turtle nests have been found along the Texas coast from Bolivar to South Padre Island. Of these, forty-five have been found on PINS so it's obvious that we need to be on the lookout for turtles on all Texas beaches; not just PINS. One loggerhead turtle nest has also been found. To report nesting turtles, call 361-949-7163. Please do not get too close to turtles that are nesting. Wait till they are through nesting before approaching. Try to mark the spot where the eggs were laid as this makes it easier for turtle technicians to find the nest site. Patrollers are all along the beachfront and after marking the site stop the first one you see and inform them of the location. Remember the speed limit is 15 mph on PINS until mid-July.

The Deepwater Horizon oil leak is mindboggling. It will be years before the long term effects of it are truly understood and understanding it won't do anything to undo damage done. This is far from a done deal with tremendous amounts of oil already in the Gulf and the spill is continuing. In the dynamic world of the sea it only takes one storm or extended period of wind direction change to move massive quantities of this oil west, just as it is currently moving to the east. That loop current they keep showing running down the Florida coast has a twin that runs down the Teas coast as well.

Tomorrow is my first day as a uniformed Biological Field Technician working for the National Park Service at PINS. For three days per week for the next sixty days I'll be gathering as much data on birds and fisheries as possible. Between that and guiding I'll be seeing a lot of PINS in the next 60 days but we all know that suits me fine. I still have plenty of open dates in July and that is the peak season for speckled trout on topwaters. Call and book a trip and get you some time down in God's Country. I guarantee it's a hoot.