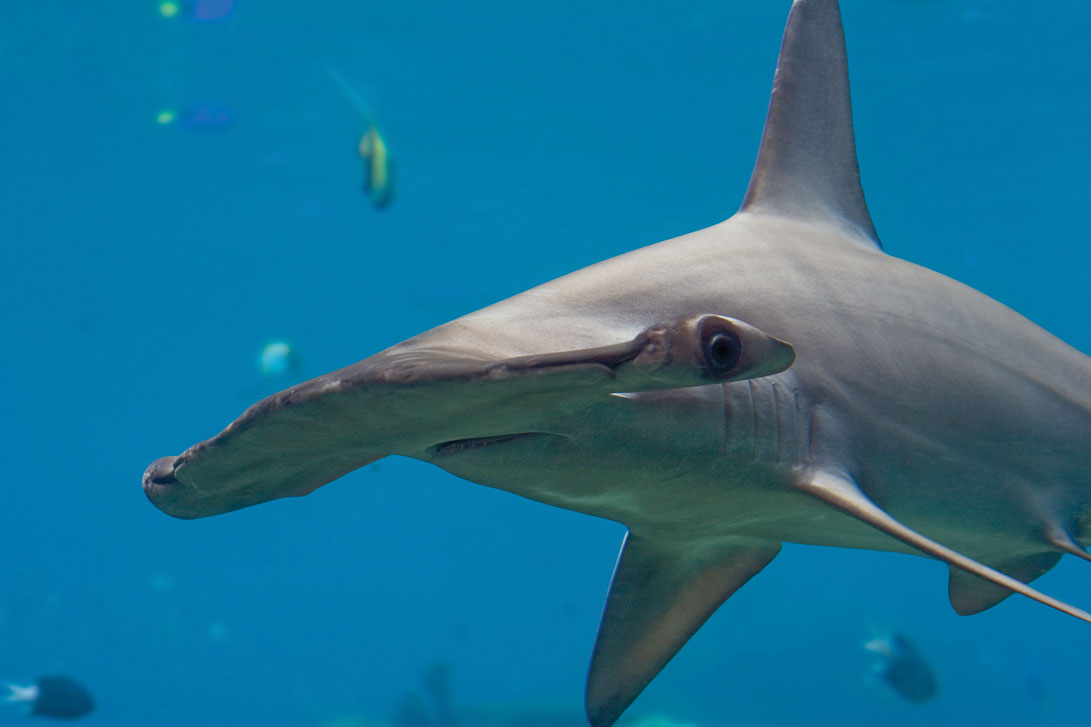 I spent three tours of duty (total 4.5 years) in our military stationed down at Guantanamo Bay, Cuba - the place known to military personnel as "Gitmo."

I re-enlisted for two years on a guarantee that I would spend that entire enlistment specifically at Gitmo. The reason for this was that I was desperately in need of an adrenalin fix and there was no war to go to at the time. I needed a mission. You see, during my second tour down there, I had learned there was a genuine resident sea monster at Gitmo that would prove a more than formidable adversary for any man or beast - that being a twenty-five foot long Greater Hammerhead that was officially known as Midnight Express.

That shark seemed to come into the bay system there at the base on a regular basis at night and had a really nasty habit of attacking Cuban refugees attempting to swim the bay at night seeking political asylum at Gitmo. They assigned me to the Base Police Department and put me in charge of the Harbor Police Division. Doing regular day and night patrols of the bay in a Boston Whaler for 24 hours and then 48 hours off was about as good as it gets.

Now there are lots of coral and reefs in Cuban waters and I had to pick a spot that was relatively coral free to have a chance at such a giant fish on a rod and reel. I chose the Coast Guard Pier near the mouth of the bay. Penn Senator 16/0 and 14/0 reels were used and I kept the baits rather small as I actually had to lay out loops of line on the pier and then "hammer throw" the leaders and baits away from the pier. I caught many species of fish including Atlantic goliath grouper, medium-sized tiger and hammerhead sharks, tarpon and large cubera snapper.

I had snaps on ropes that secured the rod and reel outfits to the pier to keep them from getting jerked overboard and fished with the reels in gear with a medium-light drag engaged.

Long about 10:00 p.m. one evening, that 14/0 took off so fast that a halo of moisture rose from the spool of the reel. I had never seen line disappear off a reel that fast before and I never have since. Quick as I could I got into the harness and belly plate and tightened down the drag and tried to set the hook. For all my effort I could not raise the bent rod and honestly I got the feeling that fish never even knew I was there. It was everything I could do to keep my footing and then it was gone.

Hammerheads are famous for doing this very thing and the trick is shortly they come back and pick the same bait up again. That Penn Senator 14/0 reel contained 1450 yards of 130 pound test Dacron line but as I looked down at it I was amazed to see at least 500 yards had been taken out during that brief run. I began cranking line back onto the reel as fast as I could and when my two friends asked why I replied, "Because she'll be back any second and we need every foot of line we can get before she does."

I might have cranked 200 yards back on the reel when I was jerked forward as the fish hit the bait again as I was cranking it in. I was still snapped into the reel with the harness and belly plate and the hard jerk knocked me off my feet and my left knee hit hard on a large, metal mooring cleat on the edge of the pier in front of me. My friends were keeping me from getting pulled off the pier by holding onto the back of my shoulder harness as I was badly off balance and on my knees. She took off strong but didn't run as far this second time before spitting the bait.

I never got up but had one of my friends take the belly plate off me and sit it on the pier in front of me. I kept the harness on and put the rod butt in the belly plate and braced both of my feet on the large, metal cleat and cranked line while a friend ran for my hammer and REALLY tightened down the drag. My arm was getting tired of the extended, high speed cranking but I kept it up till the bait was only about 150 yards from the pier and then I stayed in that position and waited. I had just lit a cigarette when she hit the bait hard twice in succession and then took off at that unbelievable speed again - in spite of the maximum drag setting on the reel.

The pressure of her run raised my backside up off the deck and I kept rocking back while pushing hard against the cleat with my braced legs in an attempt to slow her and get a good hook set. I was using every fiber of my body; straining every muscle as hard as I could, while my two friends each kept one hand on the back of my shoulder harness for fear I would get pulled in. None of it had any effect on the fish whatsoever.

When about 1,000 yards of line was off the spool my shoulders and forearms began to burn like fire and as the distance increased they became numb. Then just to add insult to injury when the spool was down to maybe 40 or 50 yards remaining she spit the bait again. She had just for all practical purposes stripped the second largest reel in the world simply by holding the bait in her teeth - just because she could - and never got hooked.

I cranked a few hundred yards back on the reel just to be on the safe side although I was sure she was through for the night and unsnapped my harness from the reel and secured it to the pier with the safety rope once again. Then I just lay back on the deck for a long time as pain worked its way up and down my body. When I could focus I lay there looking at the stars and marveling at the fact that 130 pound test line had not broken under such pressure. Then I dozed off a bit in place without ever moving.

When I woke I cranked in the rest of my line, gathered my gear and threw the rod and reel over my shoulder to go get some sleep. The two fishermen who had shared the experience with me laughed and asked, "Well, what do you do now Billy?" I chuckled and said, "That fish can't be stopped on a rod and reel from a pier so I'm going to get a boat." But then that is the beginning of another story