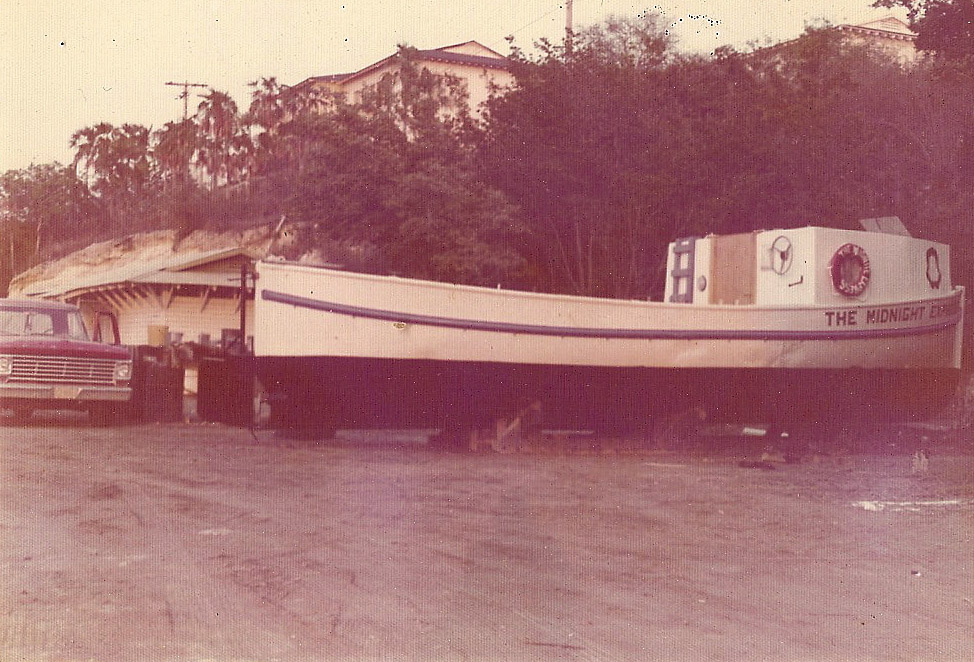 The “Midnight Express” shortly after renovation for fishing.
Several years before a freighter had sank in the Windward Passage and the survivors made their way to Gitmo on French-made, doubled-ended, aluminum life boats. I bought one for $2,000 but it needed a complete rebuild. The movie "Jaws" had just came out and I was selling jaws and shark tooth necklaces as fast as I could prepare them and I quickly learned they were unbeatable bartering material for everything I needed to get the boat rebuild completed. The boat was 36 ½ feet long, 10 feet 11 inches abeam and drew 3 ½ feet of water. We installed an automobile engine as that was all that was available and completely rebuilt it via the J. C. Whitney catalog.

Four pieces of three inch pipe ran underneath the bottom of the hull in four foot lengths forming a "keel cooler" fresh water cooling system. When finished I painted the name "Midnight Express" on the boat and sketched a large set of shark jaws on the outside of the cabin walls on both sides.

It would be impossible for me to fight the fish on rod and reel, clear the anchor, get the other rigs in and give chase with the boat at the same time. Likewise should I succeed in bringing the huge fish alongside the boat at least one other man was an absolute necessity to help with gaffing and attaching ropes to secure the fish and two men would be better. Problem was most folks weren't into chasing sea monsters and I only targeted her when I had at least two people who weren't scared to death of her.

A pal who worked over at the airbase told me, "Sandy, you need a bucket of that foam we have to put out fires on the runway." I asked why and he said, "Because it is concentrated animal protein which means concentrated animal blood." Within a couple of days I had a five gallon bucket of it on the boat. A fella named Conley had been fishing regular with me and shortly thereafter we were approached by a married enlisted couple who said they'd like a chance to go on a hunt for this Midnight Express they kept hearing about.

We loaded our gear and I took us out past the mouth of the bay to a point as far offshore as regulations allowed us to go. Beautiful 30-50 foot cliffs dropped straight off into coral reef with no beach present. The reef gradually deepens to 60 feet and then forms a sheer ledge that drops straight down into deep water. I anchored up in about 50 feet of water figuring the large fish most likely entered the bay skirting the outer edge of the reef. There was a very strong outgoing tidal flow. Caught between current and wind the boat rode smoothly on anchor but broadside to the water movement.

Conley and I tied a rope off to our bucket of concentrated animal protein and I drove three holes in the metal bottom and we tied it off amidships on the up-current side of the boat. I rigged baits on the 14/0 and 16/0 reels and put a six pound blue runner off the bow on the 9/0. The 16/0 was off the stern the 14/0 was amidships and the 9/0 off the bow with the rod stuck in a rod holder affixed to the cabin wall. About 10:30 the boat made a noticeable lurch against the anchor line and then did a 180 degree turn against its anchor line and a couple of hard jolts made all of us lose our balance. The couple with us immediately freaked out and the woman was screaming in fear.

As I tried to calm them down Conley kept intently peering over the port side and repeating over and over, "Sandy, you really need to come look at this. What the hell is this?"

When things get out of control I immediately take control. It's just my nature. I grabbed the couple, shoved them down into the cabin and padlocked them in. The boat was spinning again as I headed to Conley and about then the 16/0 made a short, quick run and was cut off. When I asked Conley what he had seen he said, "It was boxcar shaped, 7 ½ feet long, 3 feet wide and had a huge protrusion at least four feet wide coming out of one side of its body."

I immediately and irritably replied, "Nothin' looks like that," but even as I said it I realized he was describing the head of a huge hammerhead shark that had swam directly up to the chum bucket. Its fins were hanging up in the keel cooler pipes extending beneath our boat's hull and that was why the boat kept lurching and turning on anchor. Instantly I realized how extremely dangerous this was as this fish could easily tear them free of the hull and leave us with one hell of a hole in the bottom of the boat.

Line began to unload off the 14/0 reel at a very fast pace. I picked up the rod and set its butt into the belly plate and tightened way down on the drag without snapping the reel into the harness. The force jerked me forward and both my knees were slammed painfully hard into the stowage cabinets built into the sides of the boat. I was in a crouched position braced in place by the pressure of my knees against the storage compartments and it was all I could do just to hold onto the rod. About 600 yards out the fish dove and cut my line on the coral of the sheer drop off and I fell to the deck when the line parted. I told Conley to raise the engine cover and see if we were taking on water and then told our guests through the locked door that if they would shut up and chill out I'd unlock the cabin. I let them out, we weren't taking on water.

As I took a deep breath of relief the forgotten 9/0 reel began to scream. I grabbed it and locked down the drag and when I did the force yanked me off my feet and I found myself laying stretched out across the cabin top and holding onto the rod and reel with outstretched arms for dear life. The only thing keeping me from being pulled overboard were my toes which were locked in place where the back wall and the roof met. The line was soon gone from the reel and it broke with the sound of a shot. There was total silence except for the muffled, sobbing of our female passenger as we returned to the dock in the darkness. I kept playing it out over and over in my mind and knew this one had me beat. Oh, I could come up with several underhanded, insidious methods of killing her but they were all lacking in honor and that's not what this was all about. It would take a full sized marlin boat with a professional crew to stand any chance at all with her on a rod and reel.

It's interesting to note that a long-accepted part of the story of the Midnight Express was that regularly once or twice every night three one foot tall ground swells with white on top unexplainably came at an angle across the bay and lapped against the shore; even during completely calm conditions. It was believed these were the wake made as her huge body traveled across the water with her giant dorsal fin exposed. I encountered them regularly and on sultry nights they were accompanied by the overwhelming odor of a shark.

To this day, on sleepless nights, I can lay there and see those three swells coming toward me across a slicked-off bay under a Cuban moon and I hear them as they lap against the hull of my boat. I smell her scent on the wind. They bring me peace and contentment and I fall asleep knowing all is right with the world.