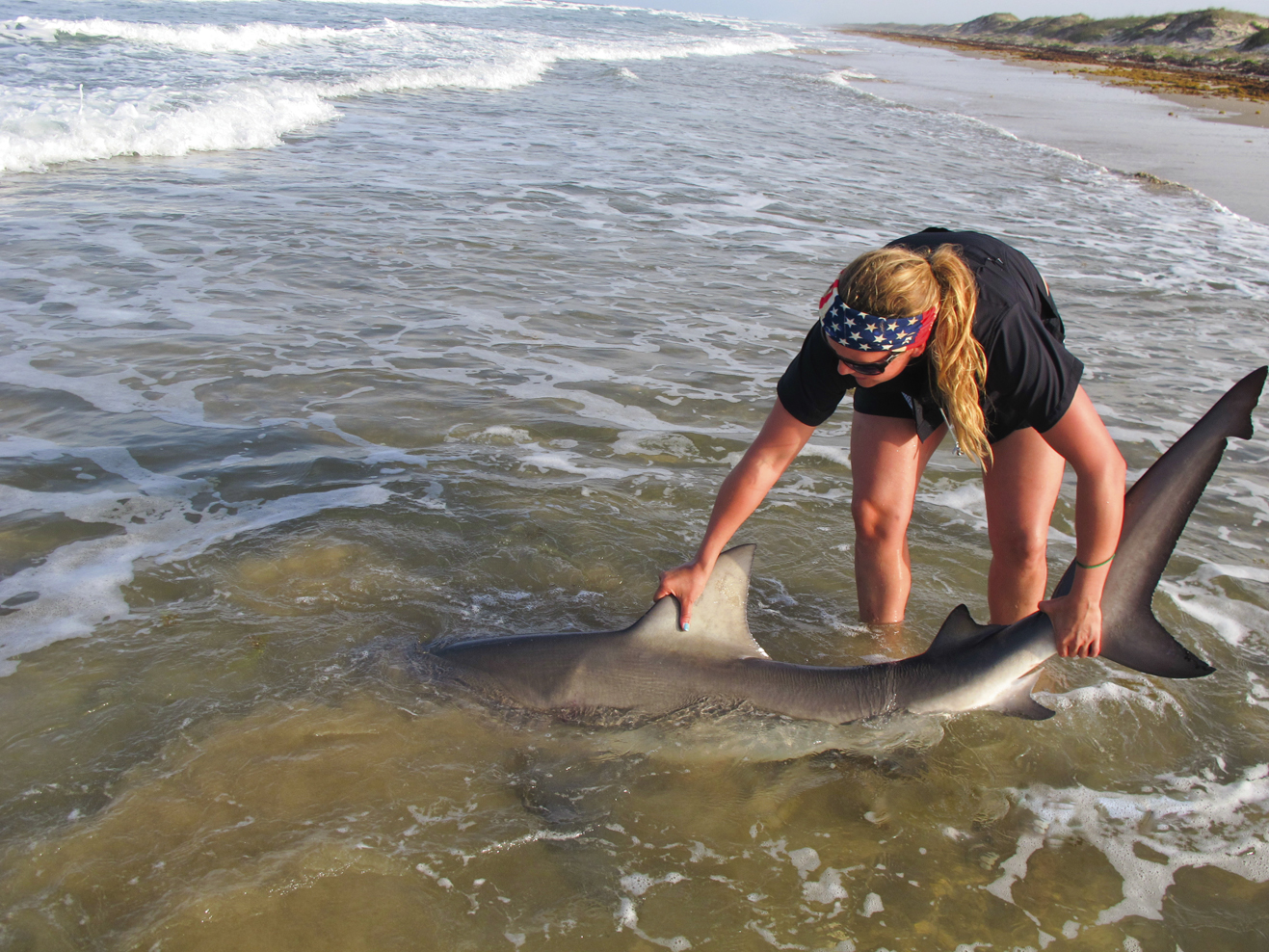 This month’s cover angler, Dani Zirkle, preparing to release her six foot – ten inch bull shark in the PINS surf.
Last month I discussed speckled trout in the PINS surf to some degree and I could go on and on about theories and lore concerning these fish but I'm not going to. TPWD says there are many more large trout than creel surveys would suggest and I personally agree with them. We hear stories of huge trout and I believe some of these are the truth. I know giant trout exist as I have seen them with my own eyes. I believe trout over twenty pounds inhabit our bays and surf and there are two very real reasons we don't catch them. First off; they behave differently than smaller trout and our every day techniques are aimed at thirty inch and smaller fish so we aren't fishing for them. A big second reason is when someone does hook one of these huge trout he is ill prepared and breaks it off or gives it slack or commits some other mistake that allows it to gain its freedom. So let's move along.

Species: SnookI haven't a clue what is going on with snook in the surf of Texas and neither does anyone else, as near as I can tell. While they are regularly caught from jetties up and down the Texas coast I only know of three ever caught from the beaches of PINS in my lifetime. In bygone years there were many snook or "pike" as they were known and there was even a cane pole commercial fishery for them. I know of large schools being observed in the surf but they simply will not feed. In my youth, smaller ones were caught in dark shallow water using jigs and moving them in a figure-8 fashion off Bob Hall Pier. The most productive time and method of catching them is from the surf side of a jetty using small live finger mullet fished on a fish-finder rig behind an egg sinker. Snook are also bad about fraying line with their sandpaper lips and cutting leaders by flaring their gills, the gill covers of this species are super sharp so sturdy leaders are necessary. They are in their highest numbers during the finger mullet migration of the fall season. A far cry from when Louis Rawalt caught a 57 pounder on a cane pole at Newport Pass. It was the state record and was larger than the IGFA world record for many years.

Species: RedfishThere are some redfish in the surf all year long and they can be caught by a wide variety of techniques and baits. They are regularly caught by anglers fishing on the bottom with shrimp for whiting. They will hit cut bait or finger mullet just as well and the secret weapon of experienced bait fishermen is chunks of fresh skipjack. They will hit most artificial lures with a silver spoon being a very dependable producer. While fishing for reds is kind of a laid back thing most of the year it can be an entirely different type of game when the finger mullet migrate in the fall. Each September, untold millions of finger mullet migrate out of the bay system into the surf and when they move into the surf they are followed by vast numbers of redfish from our various bay systems. This is also the time of year when adult reds move into the surf from offshore to spawn. There are lots and lots of redfish schooled near the jetties and in the surf. If you are in the right place at the right time you can catch and release large numbers of redfish. We've had numerous days when we landed over 30 slot and oversized reds on lures and I remember one day's count being 58 in murky, rough, high water on finger mullet.

Never is being observant and driving slowly more important than at this time of year. There are few days when various numbers of redfish are not encountered resting in the pools and pockets of shallow water immediately alongside the shore. Stealth is absolutely mandatory and small paddle-tailed plastic baits seem the best producers. By casting to fish on the edges of the group several can often be caught from the same school without spooking them. Stay alert for copper-colored oval shapes just over the first sand bar. Often this is hundreds of closely packed migrating redfish.

I have a theory about our fall redfish. At least 7 out of 10 have been bitten recently by a shark. Not meat missing; just a fresh bite mark. It leads me to believe they move out of the channels and head offshore where they are attacked by schools of sharks laying in wait and the survivors move from that deeper water to the shallows of the surf to protect themselves from the sharks. Most of the bite patterns are indicative of six foot bull sharks or others of similar size. Then as the water cools and shark numbers decline many of the reds move back offshore. The key to finding redfish in numbers, other than visually, is finding where the finger mullet are the thickest. If you find a pool two- to three feet and full of finger mullet that are milling around rather than moving steadily, you can bet the reds are there as well or not far away. If the reds are good-sized you are often better off fishing one bait per line rather than two, as if you hook two reds they will usually destroy your terminal tackle fighting each other.

Species: Jack CrevalleThe average jack we encounter on PINS weighs sixteen to twenty-two pounds although I occasionally see sixty pounders. Years ago Saltwater Sportsman Magazine referred to them as the "barroom brawler of the sea." They just put their heads down and take on all comers. They are undeniably one of the hardest fighting fish in the sea. For decades I've told folks, "Everyone should catch one jack crevalle on light tackle but a second one should be optional."

Jack crevalle show up in the surf and stay in varying numbers from March into June when they pull out to deeper water for the summer. They show back up in high numbers to feed on the migrating finger mullet in September through early December prior to migrating offshore and south for the winter. The mullet are migrating south; into the current at the water's edge, and the jacks are running to the north at the water's edge, meeting the mullet head-on. Brown pelicans feed on the same bait species as the jacks and when you see a flock of diving and whirling pelicans ahead of you at the water's edge you can rest assured the jack crevalle are there as well.

Jacks will hit any type of lure or natural bait but a large silver spoon is a steady producer. Stop a few hundred yards in front of the jacks so as to give your anglers time to get the gear ready. You'll be sightcasting the jacks, which may be in plain sight ten feet from you. A fly fisherman's dream.

Throw at an angle ahead of the jacks so the bait approaches them naturally. Jacks make long, determined runs so be sure not to have your drag screwed down pretty tight. Once everyone has lost or caught their jacks you can turn the truck around and catch up to the pelicans and get back into the jacks. Each time, remember to give your anglers a head start by stopping well ahead of the jacks. They are a bloody, dark-meated fish and while a few people enjoy eating them most release them or freeze them for shark bait later. Wear gloves when picking up jacks as the sharp ridges on their tails will make for nasty cuts on hands and fingers.

If we don't leave any there won't be any. -Billy