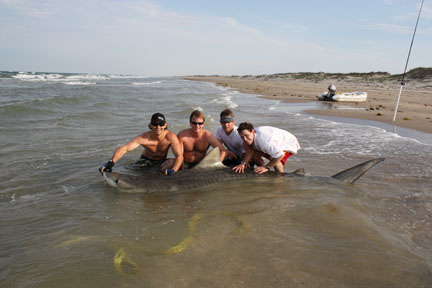 Gabe Goodman tagged and released this 11' 6" female tiger May 30 on PINS.
On the night of 20 May, Larry "Flakman" Flak and four other men were killed near Houma, LA when their 24-foot boat collided with a barge in darkness. Larry was a well-known petroleum engineer, currently living in Conroe. Larry was among the experts who battled the oilfield fires in Kuwait with Boots & Coots during the Gulf War. He was a longtime saltwater fisherman, always outgoing, who befriended many up and down the Texas coast. One of my favorite memories will always be Larry inviting me to join a small group and fish Lake Guri, Venezuela for peacock bass. It was an awesome experience that I could never have been able to do without his generosity. He will be missed and remembered by many. His family is in our prayers. Fair skies and smooth seas, Larry. Then David Rowsey calls and tells me about Brother Mike McBride being hit by a stingray and having very serious complications set in. Later I learn a second angler had the same thing happen the same weekend wading the East Cut at Port Mansfield and I think, "Well, Mother Ocean, you sure are playing hardball here lately." And then I am instantly reminded that "here lately," just does not apply. Mother Ocean has always played hardball and always will.

I think this is the second time Mike has been hit. I've been hit three times. Mike cleaned the wound immediately and got some antibiotics as soon as possible but infection had already set in by the time he saw a doctor. He thought everything was going to be OK. I never went to the doctor and continued working the remainder of the day in two cases. I have some permanent scar tissue and nerve damage in my left foot which troubles me now and then but I was lucky and Mike wasn't.

But I think there is more to it than that. I think the danger from infection from such encounters increases as time goes on. While talking to Mike on the phone this morning he asked, "Billy, what ever happened to the time when we jumped into the water to soak and help cure our injuries. Saltwater soothed and helped heal wounds and now it's the exact opposite."

He's right, that's the way it was in my youth but I fear those days are gone forever. Texas water temperatures rising three degrees in sixteen years in our bay systems could certainly be involved and there is no doubt agricultural and chemical runoff into them has an impact but, the bottom line is that it is totally out of the question to expose cuts or any open wound to the water without running a grave risk nowadays.

During the past eighteen years I have presented many seminars and lectures and one of the things I always relate is how a guy once asked, "What is the first thing a beginner needs to learn to catch big fish the way you do?"

I tell them of my reaction, looking him straight in the eye, I replied, "The first and most important thing you have to learn is that no matter how much you may love Mother Ocean, you must realize that she couldn't possibly care less if you live or die. Every split second, all of her children kill each other to survive and she doesn't take sides. She cannot. For if she favored one over the other, the system couldn't function. So before you bite it off, you better make sure you can chew it."

I don't think Mike and I actually chose to live the life we live. It is a need to be on the water that we cannot escape. I think we were born to it and the same goes for many of the other writers for this publication, many who read it and some who may not. We are children of the sea and we are born to fish. It's some primeval DNA thing, but it does not come without a price. That price is often paid when we grow complacent to the dangers we face. We forget that all of Mother Ocean's children must never drop their guard for even a few seconds lest we become victims.

Few fulltime fishing guides are in a financial position to buy health insurance or doctor visits every time they get hurt. We are not even going to talk about the time a 100-pound bull shark I had tagged and released turned and charged, hitting me at top speed while raking four front teeth from my ankle, up my leg, and all the way to my chin. I soaked the wounds with Epsom salt for two nights and went right on fishing daily until the wounds turned purple with red streaks, swelling to twice normal size overnight and beginning to seep. Naw, we're not even going to relive that memory. We all know the many dangers of boating at night. Anyone who hasn't hit an unseen object is bound to sooner or later if they continue running in the dark. I already have, so I am now a good deal more cautious than I once was.

As far as the stingrays; the first step toward reducing the probability of suffering a serious hit is to purchase and wear good stingray protective footwear. Next is sliding your feet; even when wearing the boots and leggings. Never drop your guard. Interestingly, Mike said he was standing still when he was hit.

You should also carry quality antiseptic ointments and have antibiotics available. Use them immediately if you are hit by a ray or hardhead. Any open cut should be kept completely dry and out of the water. Some of us have little choice but to continue working with injuries, but you can rest assured that I immediately treat them and then apply a waterproof bandage coating. I make it a practice to re-apply the coating throughout the day and I am not sure they are 100% effective but this is what I do. Best thing to remember; do not wade with any open wound - period. Stingray wounds are extremely painful and the potential for infection can be life-threatening. Seek medical attention as soon as possible. The last week of May the phone finally started ringing with customer bookings for the first time this year and it was as long overdue as was the inch of rain we received at the same time. I came as close to going broke as one possibly can in mid-March due to a lack of charter business. During this period I had the occasion to speak with a lifelong pal who is a fulltime bay guide. He asked how business was going and I told him.

He said, "Billy, I could book you twenty charters a month but you know what they want; they want to throw live croakers and keep full limits of trout."

Personally, I do not care what someone uses for bait. It's the killing of ten solid trout per day per person that I cannot accept. I thanked my friend for the genuinely kind offer and that I appreciated it deeply.

I promised myself years ago that I would never make short-term personal gain a priority over the wellbeing of the resource. My impression is that we are going to see extremely heavy use of our resources this summer on both the bays and the beach. The number of visitors on PINS during weekends is presently overwhelming and truth be told is already crippling fishing success and I believe it will continue.

It is so simple to me; the size of the pie remains the same while the number of people holding out their plates is skyrocketing. The only solution is smaller individual helpings. The bite is on and the weather has moderated. Take time to enjoy it while it is here for this too shall pass.

If we don't leave any, there won't be any.