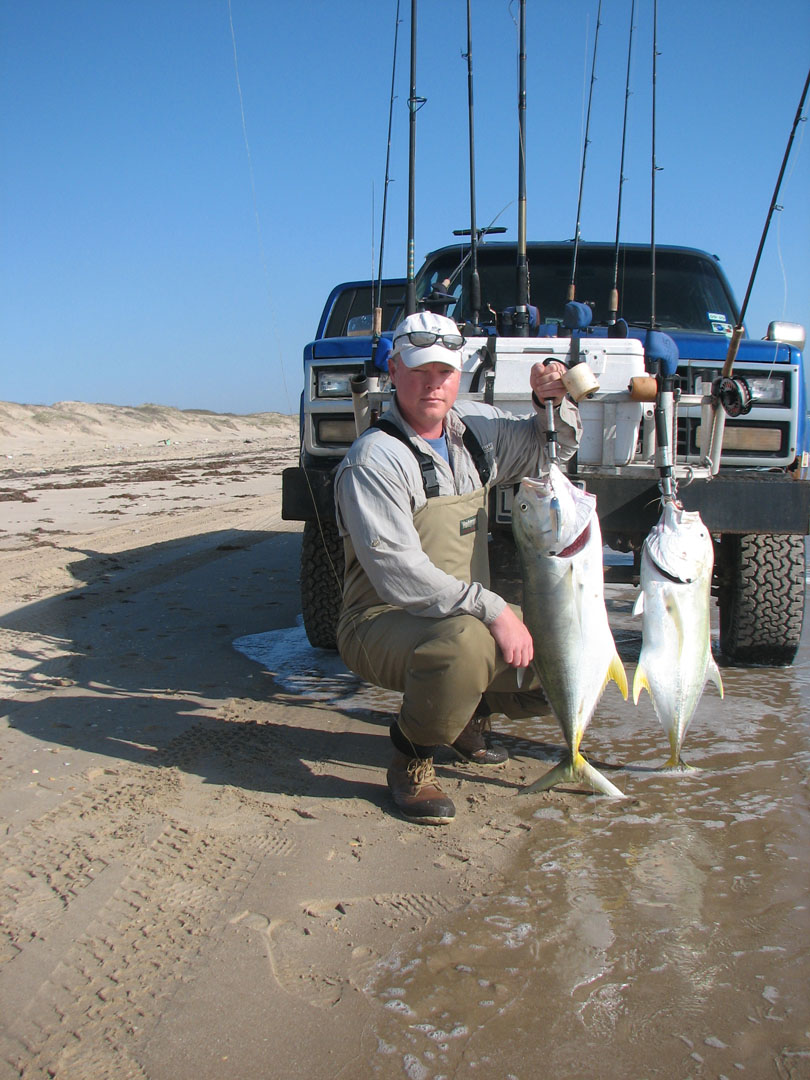 Jeff Wolda of Bulverde with sightcast Jack Crevalle on 16 March.
There are some new laws on PINS that went into effect on April 1 but this is my first opportunity to let you know about them. Effective April 1-July 1, the speed limit on the entire PINS beach has been changed to 15 miles per hour. That makes for an 8-hour roundtrip to the Port Mansfield jetties. Also, any bay guides fishing within the boundaries of PINS in the Laguna Madre are now required to have permits from PINS and insurance listing PINS as a co-insured. Questions can be directed to Law Enforcement at PINS by calling 361-949-9239 ext. 33. PINS web site is nps.gov/pais/.

Nesting season for the world's most endangered sea turtle, the Kemp's Ridley, occurs during this April 1-July 1 timeframe and all visitors are urged to be observant for nesting turtles and report them to 361-949-8173 ext. 226 or 228 or 1-866-887-8535. Beach travelers might also try CB Channel 1 to relay turtle information to others who might be within cell phone service coverage. Please note that neither the Park Service or turtle patrollers monitor CB communications but it still might be a way to pass information. Please don't interfere in any way with the turtles. Mark the spot and if impossible to call out let the first turtle patroller you encounter know about the nest site and how you marked it. There will be patrollers constantly searching for these nesting turtles along the entire beachfront daily.

The final stats for the Fourteenth Annual Big Shell Beach Cleanup have been compiled. A total of 800,000 pounds of trash was removed by 502 volunteers and 9.75 miles of beach was cleared of debris in the Big Shell and more down near the Port Mansfield jetties.

NPS (National Park Service) personnel are continuing the task of removing the vast amounts of remaining debris and hope to have it done by October. Friends of Padre, Inc. will be making a donation of $20,500 to aid in these continuing efforts.

Although I have been receiving quite a few inquiries for surf fishing charters, getting the weather to cooperate throughout March has been quite difficult. I have been spending quite a bit of time working as an Audubon Coastal Warden; protecting and enhancing rookery islands for colonial waterbirds in the local bay systems. You got it; I'm one of the guys who puts up signs around spoil islands warning boaters to stay clear during nesting season.

I am well aware that a lot of you probably aren't real big on "stay clear" signs and I've never been either but, I want to give you some information that might make you think differently.

There are only nine Audubon Coastal Wardens in Texas, yet we have tremendous numbers of birds nesting here. There are a limited number of spoil islands suitable for nesting waterbirds. Data from thirty-eight years shows almost eighty islands have been used as nesting sites by colonial waterbirds in the Upper Laguna Madre from Bird Island to Corpus Christi Bay. As of 2007, only forty-four were active and of those, only thirteen have not experienced considerable losses in overall numbers of individuals and species. Fourteen have eroded away completely. Twenty are completely abandoned due to mammal predators and human disturbance. Twenty-nine are now used exclusively by laughing gulls.

The gulls are more tolerant of human encroachment; other species are easily spooked during nesting season. Some will not nest if disturbed or will nest only until continuing human disturbance drives them off their nests which they will abandon. Unfortunately the window for nesting is short and they will not go elsewhere and start over. They simply give up and won't rear young that year; if they do, it will be a smaller number.

As Audubon Coastal Wardens, we attempt to remove predators from potential rookery islands and control fire ants. Audubon leases numerous spoil islands from the General Land Office and is literally paying rent to the GLO for the birds to have a place to nest. As available nesting sites decrease, bird species are sharply declining in number with most species occurring in 30% of the total number of colonies in use 10 years ago.

Several species are classified as threatened due to their rapid decline. As the available nest sites and the overall populations of birds decrease, the tremendous increase in the human user group continues. As we patrol local bay systems monitoring nesting activity it is all too common to see boaters, kayakers, wade fishermen and jet skiers in extreme proximity to the rookeries and nesting birds. Sadly we know the potential for the birds to nest successfully decreases every time someone comes too close.

A short few years ago there were twenty active rookery islands in Redfish Bay and last week there were two. Decline in species diversity on islands is especially apparent in the past ten to fifteen years; which coincides with the tremendous increase in numbers of the human user group in Coastal Texas. Lots of folks enjoy the birds. The laughter and joy on the face of a small child upon seeing a large bird reminds us that we often overlook how beautiful and special they are and how much a part of our world they are. They could be likened to living dinosaurs. But there's more to it than that; they are considered "environmental indicators" of how healthy the overall coastal ecosystem is.

There's also a very real "other side" to this story. As their numbers continue to decrease these species currently listed as "state threatened" could all too soon become Federally Endangered and if that happens the government will take measures to protect them. And trust me, those measures will be far more restrictive and intrusive to human bay users than staying reasonably clear of a few island rookeries is today.

I got tickled recently to see a great blue heron nesting on top of a well-hidden duck blind. Living proof that there is room for us all IF we just use good sense. The rookeries are only "off limits" from February through August. There is no given distance on the signs saying what is too close. There is no reason for there to be. Outdoorsmen can easily tell. If your presence makes the bird start calling continuously or show other nervous behavior you are too close and certainly if they fly off their nests you're too close. Eggs left unattended for too long due to human presence will be ruined and never hatch. The brown pelican; although still listed as Federally Endangered is making a strong comeback and these other species can do likewise. They just need our help by leaving them the space necessary to reproduce.

I do three types of fishing charters; beach, bay and nearshore. Right now all three are subject to tougher new federal regulations enacted January 1, 2009. By staying clear of these active bird rookeries we are not only helping them and the balance of nature; we are also insuring we won't have more restrictive state and federal laws put in place that will impact our activities in the bay systems in the future. Sure makes a lot of common sense to me.

Erick, "Oz" Ozolin TPR'd a beautiful 9' 8" female tiger shark on the PINS beach on March 17 and that is extremely early. Spanish mackerel showed up in February, which is also extremely early, and we had a 25lb jack crevalle on February 20. That is the only February surf jack crevalle I ever heard of . As of the end of March sargassum has not shown up in amount of the past five years and this is good.

If we don't leave any; there won't be any.