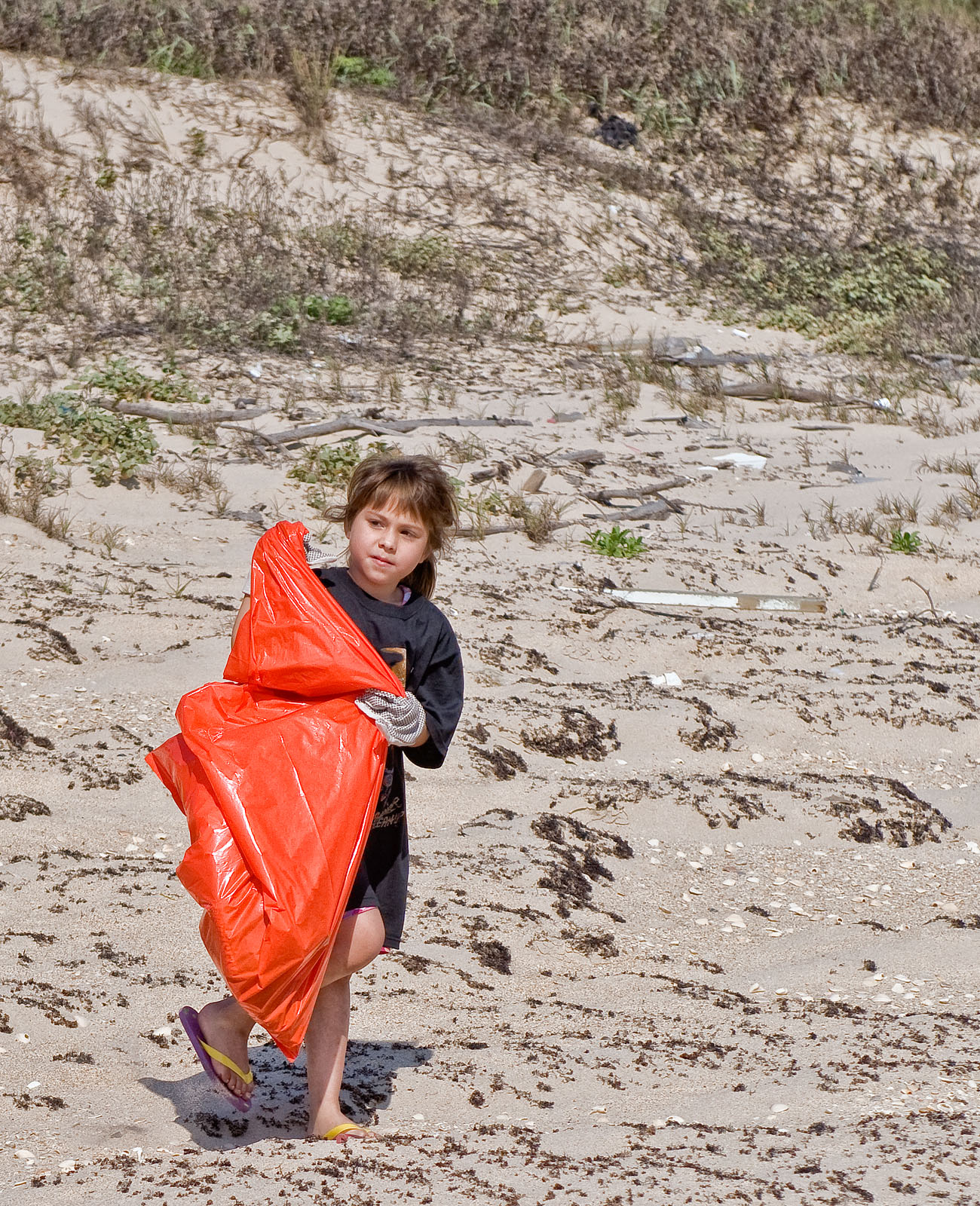 This past Saturday, March 19, 2011, a total of 501 volunteers joined together in removing forty-four tons of trash between the 16 and 26 mile marker stretch of PINS Big Shell Beach. This year's effort pushes the all-time total amount of trash removed from the beach by this event to a whopping TWO MILLION, ONE HUNDRED EIGHTEEN THOUSAND POUNDS.

Overall, the event was probably the smoothest ever and after a string of Big Shell cleanups being plagued by tough weather we finally had absolutely perfect conditions for the event. I used to think how wonderful it would be if some day we could actually pick up a million pounds of trash. It wasn't even a goal. Sounded too grandiose. It was just a wish to be placed on that old "wouldn't it be nice" list most of us have. As I look back over the years I am in utter awe of this cleanup and the many hardworking folks who are committed to making the environment a better place and help make it happen. This event is somehow a living being. It draws people to participate. This year we were short some long term players but they were replaced by determined first-timers that brought their own brand of excitement and dedication.

Our editor, E.J., won the "hard luck" award for the second year in a row by blowing his transmission 25 miles down island and having the pleasure of Rudy from PINS NPS Maintenance Section towing him all the way back with a front-end loader. E.J. and Pam also won the prize last year as well when they pulled into Malaquite on Saturday morning with a smoking front brake caliper that prevented their participation but this calamity was so much more interesting. Although a very select few are tiring of this event it seems there is more interest in it every year and we are bound to lose a few volunteers now and then to what I call increasing maturity but they are replaced by smiling younger ones. Other vehicle causalities were low in number with only one broken leaf spring and a broken drive shaft that I know of. I lost my water pump and a charter yesterday down at the 18 mile and hated it as I was intending to attend the Bassler's Port Mansfield clean up today.

One thing I found odd this year is everyone was talking about the poor driving when I thought it was pretty good maybe a bit bumpier than usual but still tolerable for everyone except the trailer haulers. Dragging a trailer loaded with trash through the Big Shell is never easy and that's why we appreciate them so much. They really risk damaging their equipment more than the rest of us. Reminds me of Ralph Wade driving up to me in the Devil's Elbow one day, he snorted and said, "Some fool asked me how the driving was in the Big Shell. I told him somewhere between hateful and impossible just as it has been for thousands of years."

Seventeen years ago when I first started this event, an occasional observer would every now and then suggest to friends of mine that my greatest motivation was to generate business for my charter service. Only one person ever made this reference to me personally and he learned it was poor judgment on his part, and trust me, he never brought it up again.

The deal is you can't make a living down there; you just do it because it is who you were meant to be and what you were meant to do. I know of no adult with a regular job who does not earn more money than I do. The overhead is prohibitive, and I have never managed to run more than 100 charters per year. Most bay guides hope to do 200 and often succeed in running 150. But out there on the beach there are simply too many obstacles working against you. In the bay you can almost always find a leeward shoreline but in the surf the wind is hitting you straight in the face and there is no place to hide.

For the past month and a half the sargassum weed has made fishing quite tedious and sometimes impossible. Some years the sargassum will begin to be less of a handicap in March or April and other years it stays right through July. Add extended lengthy periods of high tides, winds and swells and hurricane and other tropical entities and it readily becomes clear there is no money in it; just the longest and toughest days in the charter business. And I have yet to mention that repairs and maintenance on vehicles is an absolute nightmare. But I would be nowhere else doing nothing else as this is who I am and what I do. I read in an e-mail that was forwarded to me recently in which the guy stated, "Billy Sandifer is the guy everyone wants to be without having to go through all the hardships he has to go through." Funny yet true.

As amazing as the Big Shell Cleanup is, folks would be stunned with the planning and donations necessary to carry out this event. This year Ms. Samantha Koepp of Grande Communications, in partnership with the Outdoor Channel, joined the team and were major supporters in many and much appreciated ways. Friends of Padre, Ruth Parr Sparks Foundation, David Ainsworth Trucking Co., Sharkathon, CCA Corpus Christi, Bassler Energy and Coastal Bend Audubon Outdoor Club continued their invaluable support. Domino's Pizza, Smart Shield Sunscreen, HEB, Shore Fishing and Casting Club International, Fishbites and Spooners provided food and gifts. Outdoor writer, David Sikes, of the Corpus Christi Caller Times, Texas Saltwater Fishing Magazine, Saltwater Angler and Padre Island Moon all helped get the word out. The event T-shirts were designed by Ben Beaty and fabricated by Gambler Graphics. Believe it or not one of the most demanding and tedious of all the jobs concerning the cleanup is doing the never ending footwork involved with dealing with all the players and seeing that the event t-shirts are top quality and ready on cleanup morning. Longtime friend, Ace Leal, has taken on and done a wonderful job taking care of the t-shirt footwork for years you sir are a saint. Next time you see him make sure to say thanks because he surely deserves much more than he receives.

Led by Laura Paul, Goldston Engineering CH2MHIll showed up with volunteers from as far away as Colorado and rented their own 4-wheel-drive vehicles for this their second event. Also new this year was Team Industrial Services headed up by Clay Wernli and we hope to see them back next year. Reagan Arnold and a crew from Citgo Refineries jumped right in to get it done as did Spectra Energy of Houston. Stephen and Donna Gregory were also very supportive as they have been for years. Michael Laskowski Sr. and Jr. of Trac-Work Inc. Railroad Maintenance and Rehabilitation in San Antonio furnished gloves. Hmmmfurnishing gloves doesn't really seem like a big deal, does it? Well figure the price of 600 pair and it changes the picture a bit, doesn't it? I am so honored to be in some small way involved with this event. I can tell you that the Big Shell Beach is the cleanest I've ever seen it. I am as proud of each and every one of you as you should be of yourselves.

Speed limit on PINS is now 15 mph through 5 July as we are into the Kemp's ridley turtle nesting season. Keep an eye out and be kind to all of the Creators children. What a Hoot.

If we don't leave any; there won't be any. Capt. Billy L. Sandifer