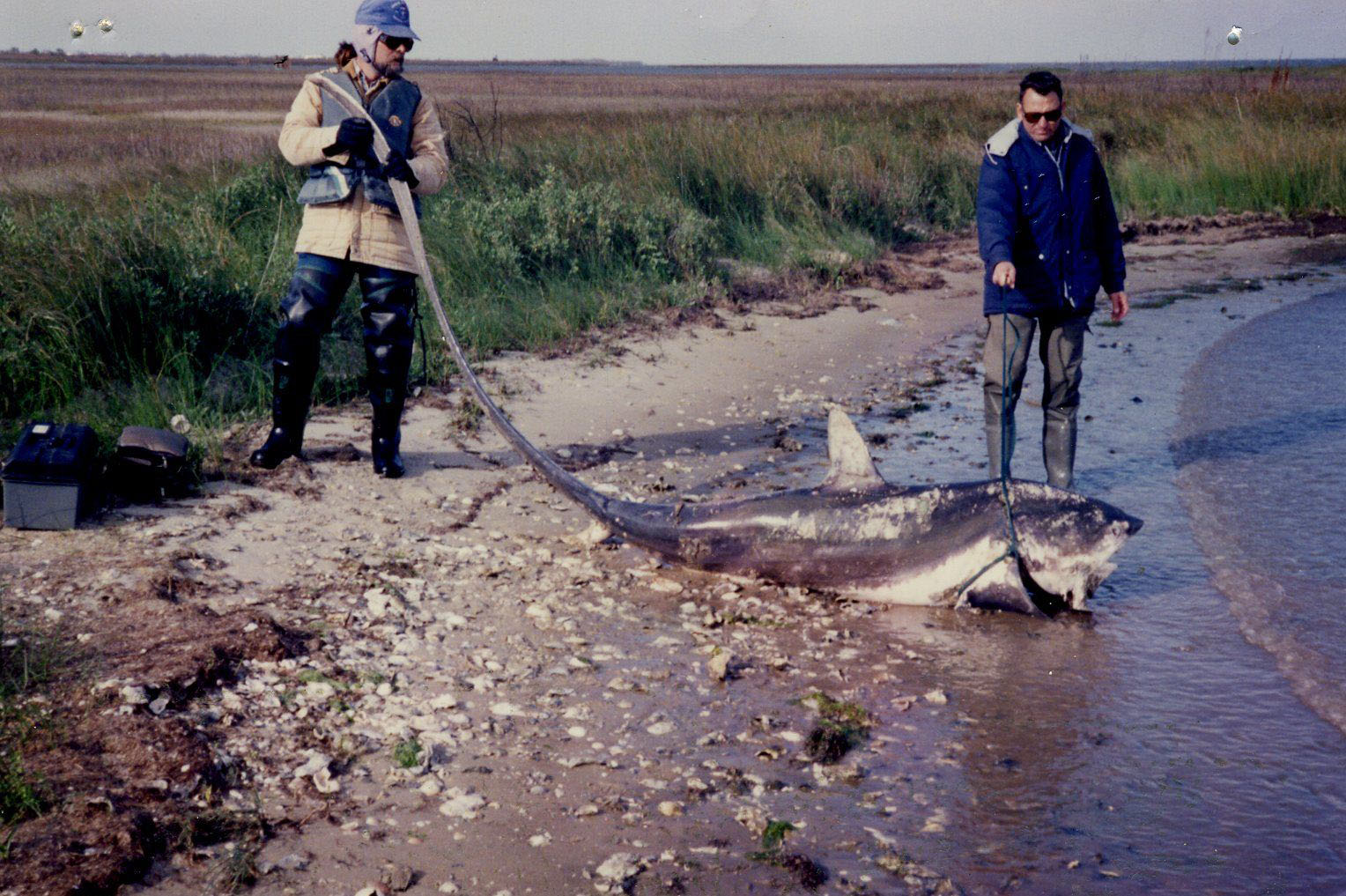 TPWD Coastal Fisheries field staff Mark Kelly and Michael Hawes with a very rare thresher shark found dead in back bays on Matagorda Island circa 1990-91. (TPWD photo.)
Although it sure isn't my favorite topic I want to let everyone know about a very real situation that exists on the Padre Island National Seashore. Two years ago we began to encounter sick coyotes on the beach. Near starvation; they couldn't walk but crawled on their front legs dragging their hindquarters. Their coats were heavily matted and their overall appearance was so tragic as to appear surreal. They began to die off and at first the thought was that they might be suffering from canine parvovirus. Then it was discovered that the mosquitoes in the area carried some of the heaviest concentrations of canine heart worms ever encountered. At this time I rarely see a coyote although I do see their tracks regularly. Their numbers are the lowest they have been in many years and pet owners should beware of this very real threat to their pets while visiting PINS.

There is now a camera in place near the entrance station on PINS. It records license plate numbers and I can see where it will be an aid to law enforcement.

Sea turtle nesting and the turtle patrol activities will begin in earnest in April. Please be courteous and helpful to the Turtle Techs and keep an eye out for turtles. Last Sunday I took the panga 37miles offshore and encountered sargassum all the way. It has already impacted the beach and it makes it even harder to see turtles while driving. Nothing is a bigger threat to our beach driving privilege on PINS beaches than someone running over a nesting sea turtle. If it ever comes down to a territorial dispute between beach driving and the world's most endangered marine creature; there's no doubt we will come out losers.

Now for some tips. When fighting large gamefish, belly plates and harnesses have long been accepted as more of a necessity than a luxury. Fighting a large fish on heavy tackle without a belly plate and having the gimbal knock digging into your lower abdomen is not only uncomfortable but likely to cause injury. There is another simple and inexpensive device on the market that seems little-known and it is called simply an "assist." There are various types made by Braid and other companies. It consists of a short piece of woven fabric with a ring at both ends. Spinning reels and many medium-sized conventional reels are not equipped with lugs for attaching to the harness and all the pressure of a heavy fish during a long fight must be endured by the angler's arms. The Braid assist is an instant cure for the problem. Simply attach one ring to the fighting harness snap, run the strap under the rod's foregrip or reel seat and snap the other ring into the other side of the harness. Those small of stature or with less physical strength will find these devices to be of tremendous comfort and assistance when engaged in lengthy battles with strong saltwater gamefish.

It's the perfect time of year to address the building of effective shark leaders and an accessory item for handling large sharks. The suggestions I am giving here apply to either kayaked baits in the surf or boat fishing and have served me well for decades. I start with 3/32 diameter stainless steel cable at least 12 feet long. I'm not a fan of monofilament shark leaders as too many get cut during the fight. Lightweight coated cable is also prone to being cut and single strand wire is subject to kinking when a shark rolls up in the leader; wire snaps easily after it has been kinked.

The leaders I build have a very large swivel at each end and another in the middle. A snap swivel runs on the upper half of the leader allowing for attaching a weight if conditions dictate. The loops formed at the swivel connections are intentionally left large. The reason for the oversized loops is to allow a safety rope to be "snapped-in" at any connection point on the leader as the situation may dictate. These "snap-in safety ropes" were in use long before I ever started shark fishing and are the safest method of handling sharks that I know of. Instead of having to wade out and wrestle a shark to shore by its tail or attempting to pull it in by the leader, the safety rope is snapped-in at the most appropriate point and the angler is in a much superior position to manhandle a fish with the larger diameter nylon rope. Often the ropes were cut in 30 or 40 ft. lengths and a second large snap was placed on the other end. This could be used to snap in place around a shark's tail. Then it was under control; being tethered on both ends. The use of this rope also makes it much easier and safer to pull the shark back into the water for the release after hook removal and tagging. On a boat, the rope is affixed to a cleat and in some cases a bicycle inner tube was spliced into the rope to act as a shock absorber and not tear cleats loose from the deck or endanger the entire boat and those on board.

The hook is attached to the bottom swivel on the leader using a 3/8" shackle. Thus one leader can be used with a variety of hook sizes and numbers but I often use a short length of #12 single strand wire to form this "hook drop" and attach it directly to the swivel. Several reasons for this; sometimes sharks will get a grip on cable with their teeth and work their jaws back and forth until they unhook themselves and at other times large-toothed individuals bite the cable in half. The slender wire slides in between their teeth and doesn't allow either to happen. IF the length of wire is kept short (18") the chance of it kinking is greatly minimized. The single strand wire also allows for quick and easy cutting with wire cutters if necessary and best of all it has a breaking strength of around 178 pounds so if you cleat it off on your boat the wire is a built in safety factor. A weak link that would very probably break before doing damage to your boat after you cleated it off.

On 26 Feb., 08' Tony Amos found a live but dying 80 pound and almost 9 foot long thresher shark on the beach of Mustang Island. This is the third such documented incident of a thresher in Texas waters. The state record for this species is 330 pounds and in 1990 or 1991 a dead thresher was found at Port O'Connor in Espiritu Santo Bay by TPWD Coastal Fisheries staffers Mark Kelly and Michael Hawes. Enjoy the spring and keep an eye on the tides and weather. Be Careful, Be Courteous, Be Kind. Captain Billy L. Sandifer