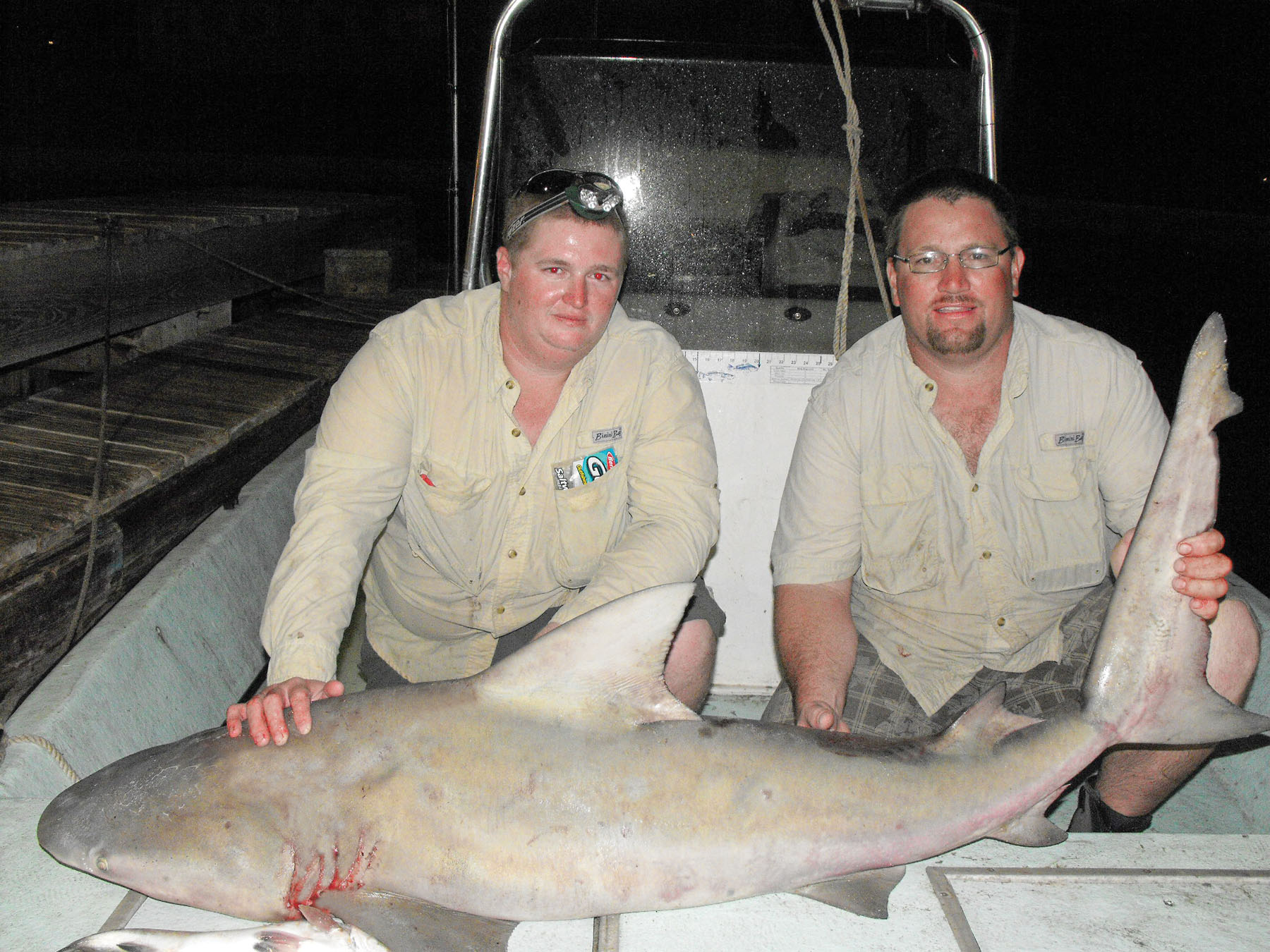 Six and a half foot bull shark caught by Chris Golla on light tackle in Aransas Bay; fishing at night for trout! Hooked while wading, the two hour battle included chasing the shark for several miles in the boat.

When I finished seven years, five months, and eighteen days of active military service, I thought my time of fighting wars was over. I figured two tours on the ground in South Vietnam and four and a half years at Guantanamo Bay should be enough for just about anyone. Urban society made no sense to me so I have spent my life fishing and shrimping with as much time in the middle of nowhere as I could accomplish. For the past twenty-two years, I have been the only licensed fishing guide on PINS. But all too quickly I learned that if you are a person who is genuinely concerned with our natural resources and their continued well-being, you can't help but be involved in one battle behind another over resource management decisions and the long term effects they will have. The words of an old country song keep going through my head - If you don't stand for something, you'll fall for anything.

I imagine everyone has by now seen inland wind farms in various places but the offshore wind farms now being proposed make my skin crawl. I simply can't be Billy and not share my thoughts and concerns about them with you because the people proposing to construct them are on one heck of a slippery slope with lots of smoke and mirrors that could very well have some long-term negative impacts on the natural world as we know it.

Baryonyx Corporation has made public permit notice to place five hundred turbines in three lease areas in the Gulf of Mexico. The leases are located five to ten miles offshore, between Corpus Christi and Brownsville. An area directly offshore from the PINS beach is listed as an alternate site should problems with radar interference develop with the site closest to the Corpus Christi Naval Air Station. Most wind turbines you see on land are three hundred to three hundred fifty feet tall. I am told that the turbines Baryonyx plans to install in the Gulf will be seven hundred feet tall.

I am also told the power they generate will be more expensive than what we have now and only 12% of the money to build them will be coming from the company. The remainder of the funds necessary will be coming from government subsidies - AKA your tax dollar. Large shoals of small fish of various species will be attracted to the sub-surface structure of these turbines as they will provide protection from predators. And then naturally, untold numbers of fish-eating birds of various species will congregate there to feed on the fish. These turbines will kill more birds than anyone would ever believe.

The PINS region has the official designation of Most Important Route for all North American birds. Why in the name of God would anyone who cares anything about the environment whatsoever, possibly pick this location for such gigantic wind farms? There will be no way to keep track of how many birds are being killed as its happening five to ten miles offshore.

Several anglers have mentioned how great the wind farms will be for snapper fishing. I do not know whether this will actually turn out to be true. My personal guess is that it might spread them out; kind of like we see when we encounter an area with too many holes too close together on the beach, or a bull tide pushing too much water into the bays.

The initial deadline for public comment will have passed when this magazine is published but there are many other phases to this before it is actually allowed to happen. I will be constantly updating my website at www.billysandifer.com concerning the wind farms and concerned individuals can keep up with status and what actions they personally can take if they are not in favor of them.

A friend recently retired and since he will be able to fish more often, I told him I was going to make a lure fisherman out of him because there was no point in him becoming a babysitter to a bucket of croakers every day for the rest of his life. Many folks are like that; they learn to fish at an early age with bait, and it works, so they never experiment with lure fishing. To each his own, but I learned long ago that the more diverse techniques I learned to fish, the better I became as an overall angler. And that has always been my ultimate goal; to continuously become a better fisherman regardless of method or species.

Been a whole lot going on around here and few charters, so a few days later when we got a small weather window and both of us had time to go, we jumped at the chance. My goal was not only to teach him to fish with lures but to teach him to walk the dog correctly with a surface plug. Guides know all too well how genuinely difficult a task that can be. I pulled a couple of nice trout while he remained without a strike, and then I got tickled as I noticed his sideways glance concentrating on my every move and lure speed and all the things I knew would make him a winner. What a thrill it was watching him when he hooked up on his first topwater trout. Holding that fish for a picture he looked like he was ten years younger. My efforts must have been successful because he ended up catching more than I did. A couple of days ago I received an e-mail from him signed Future Topwater King. What a hoot.

I received word from Sport Fishing Magazine that I have been selected as one of the five finalists in their Making a Difference conservation award. Presentations will be made in Las Vegas on 13-15 July, 2011 at the American Sportfishing Associations ICAST Show. There are so many things going on I do not know if I'll attend or not, BUT I want to thank all of y'all who voted for me.

My brother still clings to life by a thread in his battle with cancer. Between trying to do a few charters when rare and appropriate weather windows appear and dealing with the Veterans Administration regularly, things have been crazier than usual. Then last Thursday I received a call from the Director of the Texas Veterans Commission in Houston to advise that it had been decided by the VA to award me 100% disability due to health problems that have arisen from my years of military service. Talk about Christmas in July. I will continue guiding but I will probably do fewer trips for hire and more for me and a pal or two. I'd like to catch a few more twelve foot tigers before I croak and this may allow me to do that. And of course I'll have to take the Future Top Water King down island and teach him to work with other types of lures and spank him now and then so his head doesn't get too big for his hat. And of course I'll still be fighting that never ending battle for the future of our marine fisheries and everything that goes with it.

The Environmental Assessment concerning the possible changing of speed limits on PINS has been completed and it appears the National Park Service is leaning towards 15 mph on the entire beach from March 1 through Labor Day, and then 25 mph the remainder of the year. This is only the first step in this process. You may have noticed I've kinda laid low on this speed limit deal although I will certainly say it is going to make life harder on everyone traveling any distance down-island. It will also greatly diminish the time available to pick up trash on the annual Big Shell Cleanup and I'm hoping they'll give us a one day waiver on that. If they don't, traveling in and out of the work area will use up about half the time allotted for the cleanup. But things are rapidly changing and my real concern is for the day we have to fight tooth and nail just for the privilege of driving on the beach. So, I'll keep my powder dry waiting on that one.