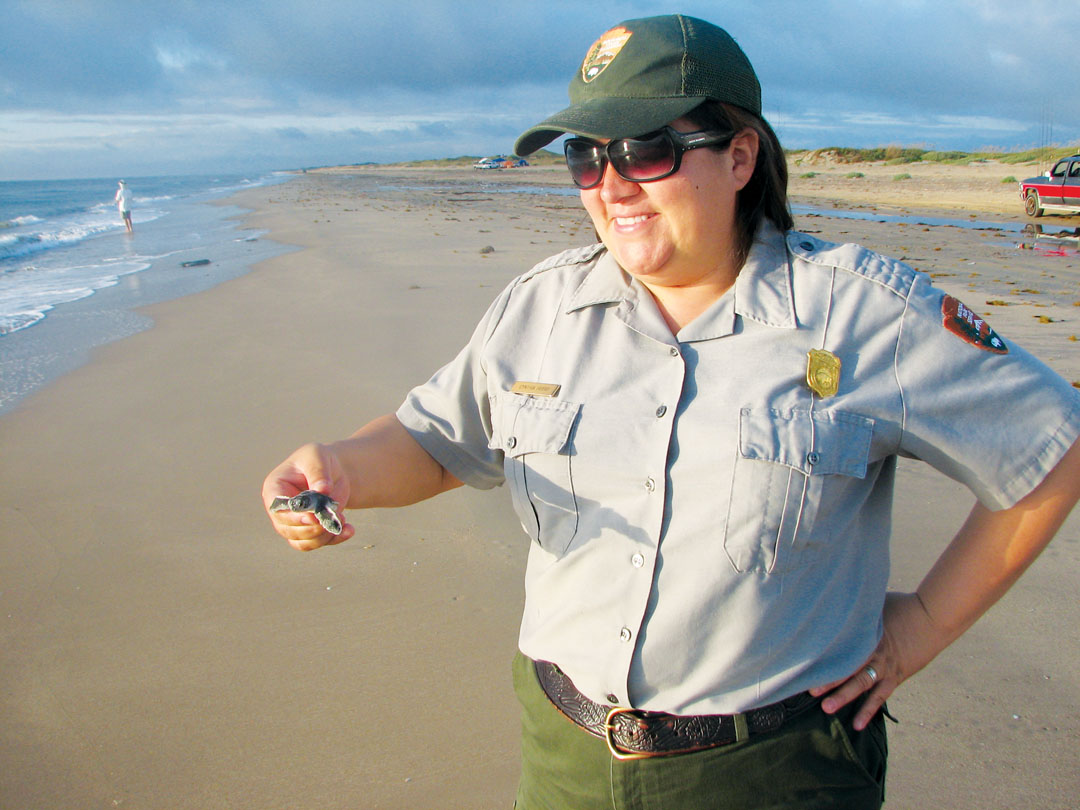 Cynthia Rubio with "Josephine" the last turtle hatchling of 2009.
Several years ago longtime turtle patroller, Linda Morehead, pulled up on her ATV and asked whether I had made the acquaintance of Carol, one of the new patrollers. I replied that I had not and Linda followed with, “Well, she's a bit different and I’m trying to keep her from scaring all the new patrollers. I told her that she would enjoy meeting you...she's a full-blooded Lipan Apache but I'm not too sure Padre Island is ready for two crazy Native Americans at once.”

Now Linda is a piece of work herself; she was born to and of this island and it comes natural. She is the great-granddaughter of Patrick Dunn; known as the Duke of Padre. Pat Dunn started running cows on Padre in 1879 and by 1926 he owned most of Padre's 130,000 acres. A legend in his own right, he was a state legislator from 1910 to 1926, renowned for preferring the company of his vaqueros in cow camp to being in town.

Pat Dunn helped launch the political career of James Nance Garner. In 1926 he sold the island to real estate developer, Colonel Sam Robertson, but retained grazing and mineral rights and ranched until his death in 1937. His son, Burton, continued to run cattle on PINS until 1971 when the National Park Service terminated grazing.

As a child Linda worked as Burton's driver on the island. Somehow it's always struck me as natural that after herding cattle out there for ninety-two years, Pat's great-granddaughter is now out there working as what I have always lovingly referred to as a “turtle herder.”

A few days later Carol pulled up and asked if I was the crazy man she had heard about.
I grinned and said, “Probably.”

I could tell she was nervous and wanted to talk but seemed unable to get around to it. Finally I said, “Damn Carol, spit it out before you choke on it. What's the matter, them spirits wearing you a little bit thin girl? Talking to you too much, are they”?

She killed the ATV’s motor and jumped off. “Thank goodness someone but me knows they’re here; I thought I was losing it. Their presence is so strong in some places that I'm afraid to stop the ATV,” she said.

Although we had been acquainted for only three minutes, I chuckled and reached out and hugged her.  “Baby girl,” I said, “They have been a part of my life down here all these years and, I promise you, I've never been afraid of a one of them and I've never encountered one that was dangerous or harmful. Actually, I've come to enjoy their company and consider them family, like the fish and coyotes and birds.”

She replied that she sensed that but she needed to hear someone with experience say it, and I laughed.

Carol then said, “There is a blackness down here; something really bad happened here. All these people come down here and they don't even sense it. If they knew, there wouldn't be anyone down her but you.”

That’s when I asked, “Haven’t you heard about the three ship wrecks in 1554? The Karankawas killed more than three hundred Spaniards down here and cooked and ate some of them in front of the others. A lot of the spirits and the darkness you feel are probably associated with that incident but there are many other spirits down here and they all have their own stories. You should know your tribal history better. The Lipan Apache were the Karankawas’ western neighbors and about the only ones they really got along with. Karankawa means dog lover, for the small mute dogs they kept. But your people had a different name for them that translates as, the people who walk in the water.”

I guess I eased her mind a little but I noticed she wasn't back for a second year. El Codo del Diablo and Down South has that effect on some folks. I guess I'm the other side of the coin for it saved my life. Had I not been able to seek refuge there after returning from the military, I don't think I would ever have survived the white man's world. I'm grateful for this magical place every day of my life and thank the Creator for it.

As regular readers know, I've been working with Endowed Associate Researcher, Greg Stunz, Ph.D. and his fine team from Harte Research Institute for Gulf of Mexico Studies at TX A&M University-Corpus Christi in shark and speckled trout tagging programs. Recently, for some psychotic and unjustified reason, certain individuals have intentionally been spreading rumors that the goal of this work is to gather data with the intent of justifying the closure of recreational shark fishing. Nothing could be farther from the truth.

Hear this; Greg and his team are avid recreational anglers and the goal of the program is to better understand shark numbers, growth rate and movement. They are supportive of Sharkathon and donated prizes. They hope to encourage sport fishermen to tag all sizes and species of sharks to support the program. These a fine group of individuals on a noble mission and I cannot imagine why anyone would seek to defame them or their work. I give you my word; the rumors are false and I wholeheartedly endorse them and the shark tagging program. Info on their activities and how to procure tags is available online at www.fisheries.tamucc.edu

There are so many new people using our beaches; including the rugged and isolated four wheel drive beach of PINS, that it is necessary to give newcomer tips now and then. And although longtime users should know it all by heart; it amazes me to drive by a camp containing over $60,000 worth of equipment and have someone come running up asking if they can borrow my jumper cables, a shovel, motor oil, transmission fluid, or fix-a-flat. I always oblige as I was taught that was the law of the beach people but I never fail to tell them bluntly that you do not come down here without these things. When others have to give you their emergency supplies then they no longer have them and that's simply not fair. Be self-reliant, bring what you may need and don't depend on the kindness of others. There are days when no others are about!

On September 12 I had the experience of coming up on Cynthia Rubio releasing the last turtle hatchling of the year. A female named Josephine, she was the last of one hundred thirty green turtles that hatched from the nest of one hundred thirty seven eggs I found. For some unknown reason, this was the only non-Kemp's Ridley nest found in Texas this year. What a Hoot.

If we don't leave any; there won't be any. Capt. Billy L. Sandifer