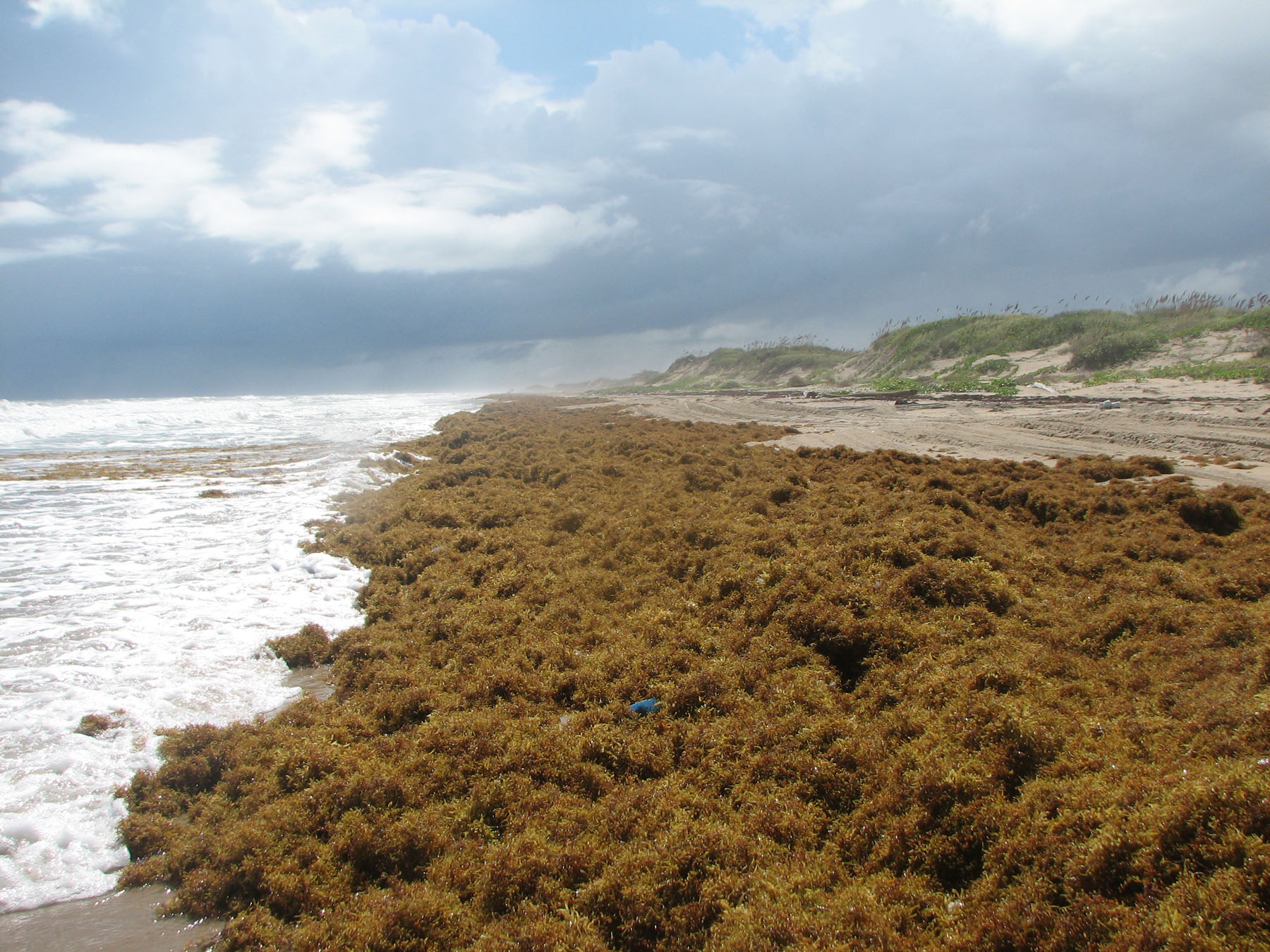 Heavy sargassum continues to plague beach travel and fishing.
Every now and then you hear one of these profound pearls of wisdom that stays with you all your life. I've been reminded of this one countless times over the past 18 years. While working as a deckhand on a bay shrimper I lamented the low catches we'd been making to the captain and he explained it all with that simple view of reality.

In the surf zone of PINS, today marks the end of two full months of some of the toughest and most unproductive fishing I have ever experienced. Fish species that should have been available in early September have yet failed to show due to continuing summer-like weather and an unending series of low pressures in the Gulf of Mexico that kept water levels painfully high. At 09:39 this morning everything changed with the arrival of a long-overdue cold front. Something has changed so everything will change, and the catches will immediately improve.

For three weeks we were under coastal flood watches and tides rose near or all the way to the dunes at some point in every 24-hour period. The trick is to monitor the tide chart in this publication and plan trips during periods when the maximum levels will occur during the night. Surf anglers should target lowest tidal times for angling and traveling on the beach. Beware of east-northeast or northeast winds as they stack water on the beach above forecast levels.

Years ago I went to a symposium on longlining in the Gulf. The speaker referred to longlines as, "the gift that keeps on killing." On 12 October I encountered and freed a 3-foot sea turtle entangled in a large ball of longline monofilament. The mono had immobilized the turtle and it had washed up on the beach and was being buried alive in the sand by the incoming tide. How ludicrous that regulatory authorities want to target lowering bag limits on recreational anglers while allowing these gigantic killing machines to operate unimpeded. I must have missed something somewhere.

PINS has enacted a "Special Use Permit" on tournaments and other events held within the park and anyone planning events needs to check with PINS personnel. Headquarters telephone is 361-949-8173. It's my understand this will not impact the Big Shell Beach Cleanup as this event is strictly for the benefit of the park rather than use of the resource. The upcoming Big Shell Beach Cleanup is scheduled for Saturday, March 8, 2008. PINS has a new superintendent and a new head ranger and changes in policy often occur when new leadership takes over.

Sharkathon organizers donated $1,500 to the National Parks Service from the proceeds of their recent tournament to help fund a "Park Watch" program. The money will be used to offer rewards for people who provide tips that lead to the arrest of people breaking game laws within the confines of PINS. They are also considering a cap on the number of participants to minimize the impact on the National Seashore. My hat is off to these dedicated, conservation-minded anglers.

I have re-powered my 25' Panga with a new 175 HP 4 Stroke Suzuki from Bill Holmes Jr. at Gulf Coast Marine. Most reliable product available with the best complete service department in the area is an awfully hard combination to beat. It's been a pleasure doing business with Gulf Coast Marine and is the beginning of a relationship I expect to continue for some time. I will be running near coastal and bay charters in addition to my surf trips from now on.

I want to share a story of the encounter with the peregrine falcon featured in our Coastal Birding section this month. I once asked a longtime customer and excellent outdoor photographer why he never attempted to take sunrise and sunset pictures. His reply was rather profound. He said it was impossible to do them justice on film and that he had come to believe they were intended for those who took the time and were lucky enough to be there to see them. It's that way with peregrine falcons as well, but I'll try.

There were two falcons working as a team. When we drove up they had spooked three terns and a cattle egret off the beach and were harassing them over the nearshore surf. One falcon was diving around the cattle egret while making no attempt to touch it; as if hazing and confusing it for the second peregrine. The second peregrine swooped in at high speed and hit the egret twice in flight. Then just before the egret fell into the sea it snatched it and flew to the foot of a dune. The picture tells the rest of the that story, but not the story of the hazing peregrine.

We watched for a full fifteen minutes as the peregrine finished off the egret and began eating. Meanwhile the hazing falcon hovered directly above, as though providing protection for its companion. No sign of animosity or jealousy was displayed, nor was there any attempt to join the feast; it just hovered there. I'm sure it would have taken some action if the prey had managed an escape at the last minute but it stayed long after any potential of that remained. Intrigued, I told my customers I wanted to see if it would remain in that position if we moved out of the area and then I moved 75 yards away. The hovering peregrine made no change whatsoever and was still there when we left the area.

As we drove away I told my companions that my bet was that as soon as that peregrine had finished eating the pair would reverse roles and the other one would make a kill and feed. Looking back I remember seeing peregrines hunting in pairs numerous times and sometimes in groups of three. I also realized I had seen that hovering scenario on several occasions but had never really noted it for what it was.

Upon returning to town I called my longtime birding mentor and told him of these behaviors and asked if there was reference in print to peregrines hunting in pairs and/or this protective behavior as I didn't remember ever reading anything about such. He replied that there was no reference anywhere to such behaviors. Considering the extensive studies and research that has been done on these birds for decades that amazes me. But not as much as being blessed to observe these wonders of creation, these makos of the sky. What a hoot - Be Careful, Be Courteous, Be Kind!