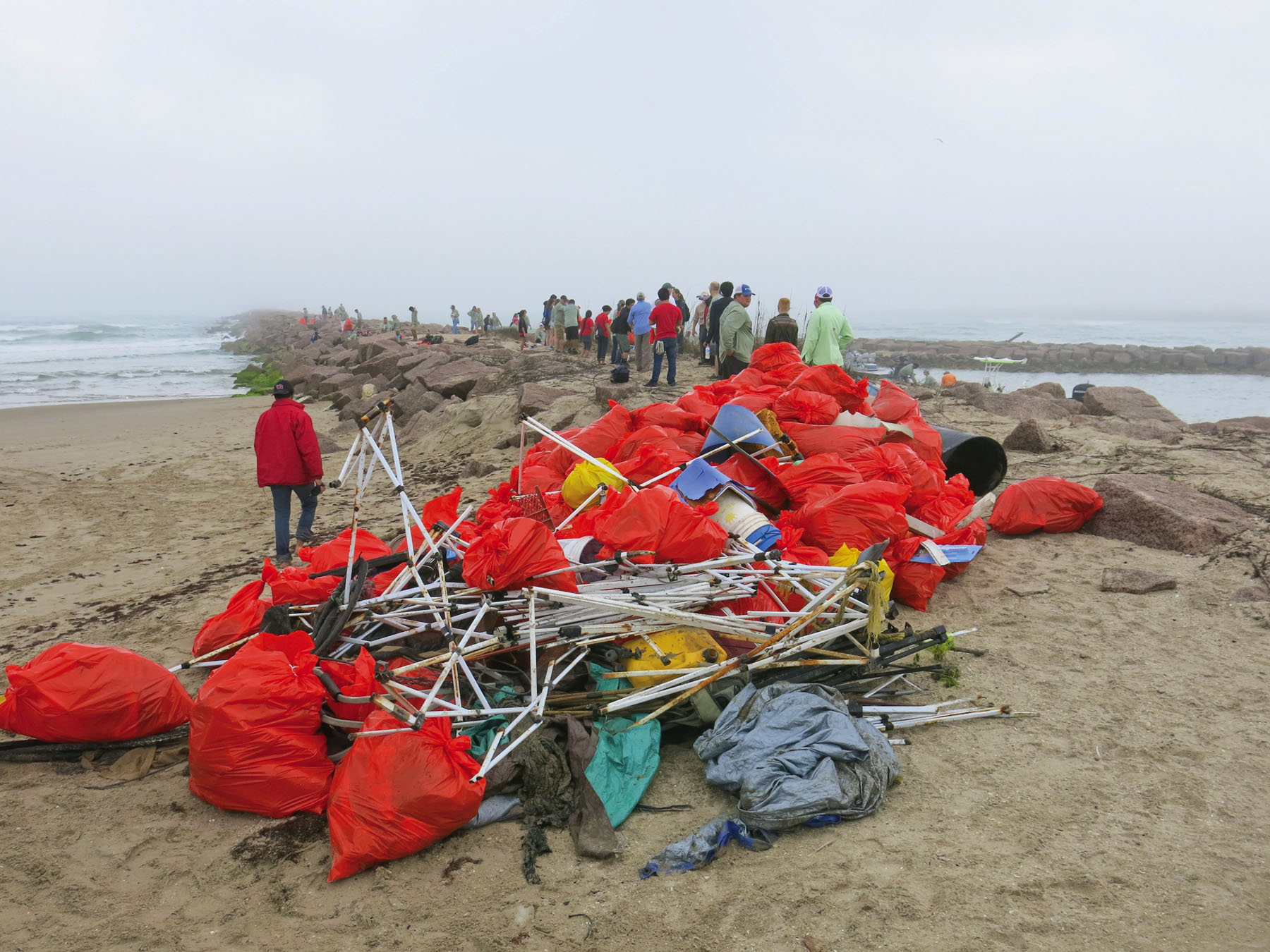 Over the years I've mentored six individuals who wanted to organize cleanup events. Three cleanup events took place on the upper Texas coast, one in Port Mansfield and two out of state. I know that at least three of these managed to stage at least one event. To my knowledge only the Port Mansfield Cleanup has developed into an annual event.

On 15 March; Jeff Wolda, Cody Moravits and I were joined by Shawn and Lydia Curless in driving down the beach to assist Kathie and Miller Bassler of Bassler Energy Services in their Sixth Annual Port Mansfield Beach Cleanup. Field & Stream magazine filmed for their "Hero for a Day" program. The event this year drew 155 volunteers; fully twice the number of people that participated in their earlier cleanup efforts. Thirty-five boats were utilized carrying volunteers out to the jetties and cleaning the shoreline of the Mansfield Cut as well. Five miles of beach was well groomed and some areas as far as 7.5 miles north were cleaned.

The logistics involved in this event are an absolute nightmare. The first year they held the event as part of the Big Shell Cleanup but it proved logistically prohibitive with the National Park Service helping on this end and trying to assist at Port Mansfield at the same time. So, the Bassler's started scheduling their event for a different date. The third year they started providing free lodging to out-of-towners on Friday and Saturday nights, in hope of drawing more volunteers. In addition they provide a free breakfast, a sack lunch and bottled water on the beach, and then a free dinner Saturday night!

They assign boats to specific areas of the Mansfield East Cut and boats work in the cut from 8:00 to 10:00 AM. Then they go to the jetties and unload their trash from the boats and start cleaning the beach. As much trash as possible is hauled north by their beach crew vehicles and the feds haul out what's left. Unfortunately campers throw their trash containing food on the pile of sacks and the coyotes and raccoons make a mess of it. SO PLEASE DON'T THROW FOOD ON THE PILE OF TRASH BAGS. When you think about it, that's awfully low gene pool anyway.

I want Friends of Padre to become more of a player in this event but have to do some head scratching to figure out the best way to proceed. High tides could force us to cancel and in this case every volunteer with or without a four-wheel drive vehicles will have to sign up somewhere in advance as we have to know we have the necessary vehicles to get all the volunteers down the beach and back. And likewise if it is extremely bad weather or high tides we'll have to cancel; which we never do on the Big Shell Cleanup. It would take too long to get down there and back if we made it at all.

This is a great youth event and this year three Boy Scout troops, two high school student council groups and a large group from the University of Houston Honors participated. The Bassler's would like to thank the Port Mansfield Chamber of Commerce and especially Christine Simmons for all their efforts in the planning of the event. And also a big thanks to many of the local sport fishing guides who gave up a day's charter during Spring Break and donated their time, their boats and their gas. Those interested in participating in or donating to next year's event can call Kathie Bassler at 979-204585 or e-mail [email protected] Their Facebook page is Port Mansfield Cut & Beach Cleanup. This is a fun event; a genuine adventure and you are invited to participate next year.

I was listening to the weather channel recently and the forecaster was describing problems faced currently by farmers worldwide. He then said "fighting erratic weather patterns" was the biggest problem farmers faced all around the globe and I thought to myself; "Yeah and us fishermen too."

Then I thought how profound those four words really were. You can go on and on debating global warming, a changing weather pattern; whatever you want to call it, but the bottom line actually boils down to four words; "fighting erratic weather patterns." The fish don't know how to react when the weather deviates from the expected norm and it's impossible for us to pattern them. As such there have been some real changes during time frames of (historic) peak abundance and species being present in the surf and I'll attempt to address these.

Species - Gafftop Sail Catfish: The past two years, good numbers of gafftop catfish have been common in our surf in late summer. This is a brand new happening. I've only seen one or two gafftop caught out of the surf here in my entire life until two years ago. They are easy to catch on most types of bait and will even hit artificials. Probably squid is the best bet. They hang in the deeper water of the surf guts.

Golden (Atlantic) Croaker: Years ago we had good runs of large golden croaker in the surf in the fall and then they disappeared. I'm told good catches of them occurred last fall. Golden croaker take shrimp readily and also cut bait fished on the bottom. Be wary of sharks if large numbers of croaker are present as they follow and feed on the croaker and Norfolk spot.

Atlantic Bluefish: These fish are episodic in the surf and can show up in fair numbers at any time of the year. In our surf they range from one half- to eight pounds and feed on anything. In the Northeast they call them "choppers" due to their razor sharp teeth and the name is appropriate. If you get a few quick bumps and your line is cut-off it's typically bluefish and a wire leader is required if targeting them. They are a very bloody-meated fish and immediately cutting the tail and bleeding them before putting them on ice is suggested if keeping them for food.

Florida Pompano: A highly preferred food fish, the pompano is most available during the winter months. January and February used to be our peak months but now October through December is best. They like clear, reasonably calm water and bluebird days. A few may be present as late as June. Peeled fresh-dead shrimp and "Fish Bites" fished on the bottom account for most pompano catches. As far as you can cast into wide, deep guts and into cuts through the bar produce best. With most species, you catch a few and the action slows, and you move on to a new location. Not so much with the pompano; a patient angler will find that after a brief absence they will show back up and you can land several more from the same spot. This can go on for some time. At times they will hit lures although normally they are out of lure casting range. A TT22 Model 51 MirrOlure has produced more pompano for me than any other lure.

Well it is turtle nesting season and crowds will be increasing on our beaches. Please drive carefully and watch out for the other guy. It's his beach too.

If we don't leave any, there won't be any. -Capt. Billy