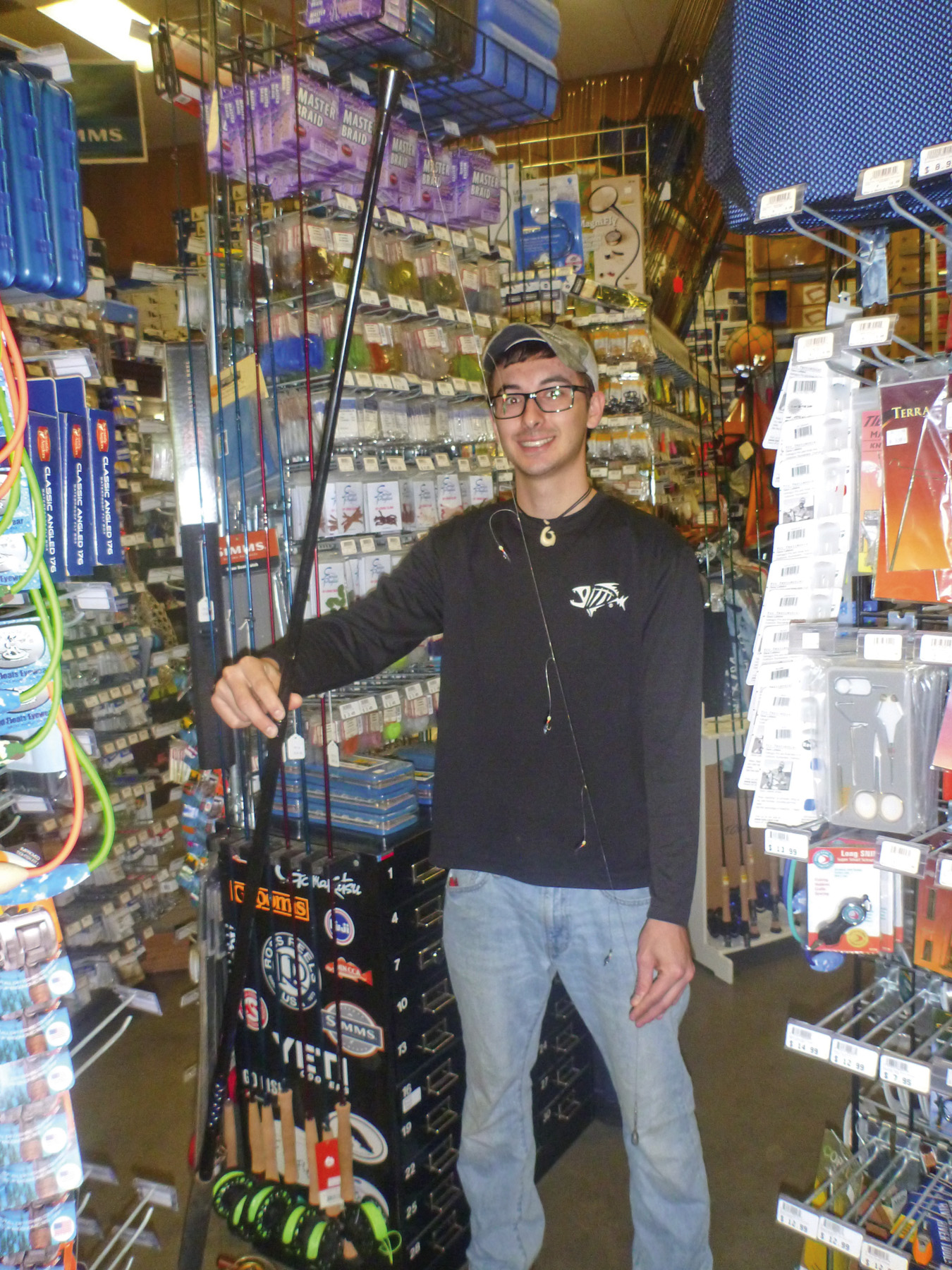 Nic at Roy’s Bait and Tackle with a Sabiki rig and rod.
A recipe calls for certain ingredients in very specific amounts and when you think about it most endeavors in life are governed by their own recipes for success. Surf fishing can often be somewhat difficult because success requires just the right amount of a great number of ingredients and timing is essential to ending up with the desired results. That is a tough combination to come up with here in the Coastal Bend.

As I write this at 4:40 AM the wind is howling outside my door and I know that based on this fact there will be no quality surf fishing today and probably tomorrow as well. The wind will churn up the water and turn it murky, create high swells, and create a strong unfishable longshore current. So our recipe for today is totally spoiled based on the wind velocity alone. Even when the wind subsides it will be some time before conditions moderate sufficiently to provide good catching conditions. Wind direction is important as a northeast or east wind will stack the water high on the beach and fill the nearshore surf with debris.

The presence of large amounts of sargassum can make driving horrible and fishing impossible. Since the early 1990s the sargassum has increased manyfold and it seems to get worse every year. In 2013 it has remained a constant problem until mid-December and I fear this trend will continue. Likewise the number of coldwater currents impacting the beach and turning it un-fishably cold and muddy has greatly increased significantly over the past four years, as have the occurrences of red tide and resulting large fish-kills in late summer.

On the beach, declining atmospheric pressure tends to slow down the feeding activity of fish while a steady barometer always seems to produce better. I'm aware that's not the case in some other areas but it is in the surf.
Now if you only remember one thing from all the Surf Fishing How-To I've written, then remember that the full moon absolutely turns the surf into a "no-life" zone and fishing during this time frame is to be avoided entirely if at all possible.

It's been a long time since we've had ideal conditions and when they loomed into view Tuesday and Wednesday I went in spite of the fact it was the full moon. During two days of constant grinding in near perfect conditions with bait present, I did not get a single bump on lures. Bait and shark fishermen didn't fare much better. There are exceptions, when the full moon turns the fish on, but my records indicate this happens once in every fourteen months so that's tough odds. Most noteworthy during full moon periods are catches of really large sharks on baits kayaked far from shore.

James Clark caught, tagged and released a 7' 5" female sandbar shark only to have her recaptured two days later 10 miles farther down the beach, by Brad Tabor. Brad also tagged and released her. Guess she was out to win a Darwin award. I also saw on television that a US Marine caught a 9' great white off the beach at Camp Pendleton, CA. That is the first great white I ever remember hearing of caught off a beach in the USA.

Wanted to cover procuring small finfish for bait a little more; and I'm aware cast netting does not work for everyone. For years I'd tie three or four perch sized hooks in tandem and fish for small whiting that my customers could use as live bait. A much better set up is cheap, more productive and catches almost all small fish species including treasured menhaden and pilchards.

The sabiki rig is usually four to six very small jigs tied up one below the other on a leader a couple of feet in length with a swivel on the top end and a small snap for a sinker on the bottom end. It is deadly effective but it is also an absolute nightmare to untangle after stowing it in a tackle box. The much-needed and welcomed solution is a fishing rod designed for using sabiki rigs. This is a specialized rod with a reel seat and one guide the line goes through on the reel seat end. Then the line is threaded inside the rod and comes out the tip. There is a special fitting on the rod tip. The rig is tied to the line and cranked up inside the rod and the small bell sinker is held in place upside down at the tip. No tangles and no mess. Just crank the jigs back inside the rod when not in use. Roy's Bait and Tackle Outfitters has them for sale for a modest price and any fisherman who might occasionally want to use bait would be well advised to have one. No live bait works better than what the fish are feeding on at the time and a sabiki rig will put you in the game by having the capability of acquiring that species of bait.

Time for an announcement - the 19th Annual Big Shell Beach Cleanup is scheduled for Saturday, 22 February. As committed to this event as I am and have long been, I must admit there have been years when I gritted my teeth and cringed at the thought of all the work that lay ahead putting the event together and then pulling it off successfully. It's amazing to me that I feel no dread at all about the upcoming cleanup but am really looking forward to it. The reason is simple; the Friends of Padre team handles and divvies up the work so no one person gets buried in it.

Island House Condos, Buddy Gough and I pulled off the first one pretty much by ourselves. Then Tyler Thorsen stepped up and has borne much of the burden these many years since. Mr. David Ainsworth of Ainsworth Trucking has been a major volunteer participant in the Big Shell Cleanup for many years. A couple of years ago he brought a big front-end loader to the event and pulled three trash trailers with it. It hauled plenty of trash out but was conspicuously too heavy to use in the soft sands of the Big Shell. He decided what was needed was a big-tired Rollagon (swamp buggy) and he spent a couple of years trying to find the perfect machine for the job. Well, this past year David found exactly what he was searching for and is having trailers modified for beach cleanup use.

What can you say to such a wonderfully selfless gesture? This rig should be a tremendous asset to the event and I can't wait to see it in action. Updates on the upcoming cleanup will be on our web site at www.friendsofpadre.com.

No real big changes to announce from other years at this time but as always we will need volunteers with 4WD vehicles and two-wheeled trailers to haul trash. Walking volunteers are welcomed and will be afforded transportation into and out of the work area. We will meet at the Malaquite Pavilion for team assignments with event will kickoff at 7:00AM and we will return to Malaquite at 2:00PM. Long trousers, jackets and long-sleeved shirts are advised, as are sturdy footwear and a hat. Water and snacks will be available in the work area and food will be served at Malaquite at the conclusion of the event. This event is a genuine hoot! You along with friends and family are cordially invited to participate.

If we don't leave any there won't be any. -Capt. Billy