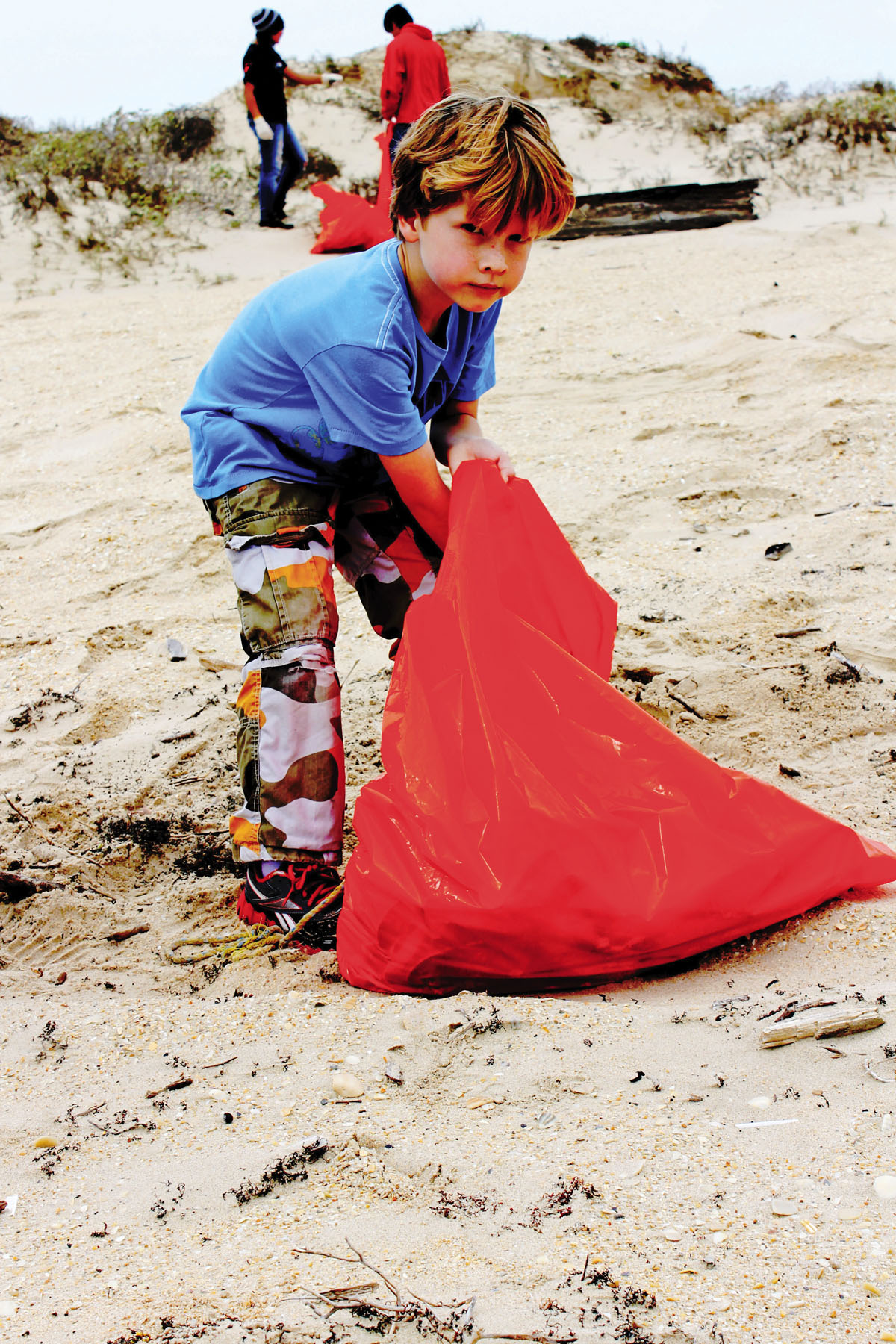 Cleanup volunteers come in all ages. Photo courtesy Cody Moravits.
Unless you have been privy to all the meetings and the planning that went into this year's Big Shell Beach Cleanup it is impossible for you to realize what all was entailed. We've always pulled it off with a hope and a prayer but this year it went off like the rehearsed, sophisticated, well-oiled machine that it is.

From the onset backup plans were in place and immediately went into action when equipment problems arose. The Rollagon pulling 3 high-sided trailers blew a hydraulic line early-on but David Ainsworth Trucking had three full-sized 4-wheel drive pickups in place to pull the trailers while a fourth truck drove back to Corpus to get a replacement hydraulic hose.

That's not luckthat's careful pre-planning, and what would have been a disaster was just shrugged off and the event moved on.

Just to check out my sense of humor I pulled a muscle in my back three days before the event so I stayed with the Rollagon crew and missed getting to visit with many friends and volunteers and I apologize for that. I promise to be a regular social butterfly next year to celebrate our 20th anniversary event. What a wonderful milestone that will be.

I started the Friends of Padre to insure that the Big Shell Beach Cleanup would one day become capable of carrying on without me and this year they did exactly that, and I was not involved with the planning. I'm glad; not sad, because now I know the event is in capable hands and will continue into the future. What is really unbelievable to me is that Todd Neahr oversaw all the aspects of the event via telephone. Part of the time he was living in Connecticut and the remainder in Florida. That's got to be one for the books!

That pre-dawn parking lot at Malaquite has always been dangerous and this year we were even more blessed by David Ainsworth as he provided a wonderful light tower. The state of the art light tower turned the parking lot into daylight without the harsh glare normally associated with artificial lighting. Ainsworth Trucking Company is in the process of becoming the distributor for these lights in our area.

This event turned out to be near perfect weather wise. A record number of 540 volunteers cleared a record-tying 13.5 miles and 40 tons of trash was removed.

It seems the volunteer group changes from year to year. Typically we have lots of walking volunteers but this year we had very few walkers while having a good supply of 4-wheel drive vehicles on hand. Driving wasn't perfect but it far exceeded what we are used to.

My hat is off to the members of the board of Friends of Padre and especially to Todd Neahr for organizing and carrying out this excellent event. You can be proud of it. A big thanks goes to Curtis Mai as well.

Without our sponsors this event would be a far different and crippled venture at best. David Ainsworth and Ainsworth Trucking Company have long ago achieved sainthood status with the cleanup organizers and continue in that role today. They furnished ice chests and bottled water, the light tower, the Rollagon and a fleet of trucks and trailers. Wow.

Stephen and Donna Gregory donate money to the event and then drive all the way down from Oklahoma City to participate. That's awesome stuff.

Ruth Parr Sparks Foundation and Mr. Leon McNinch remain the financial life support of the Friends of Padre and we'd be lost without them.

The Corpus Christi Caller Times and our outdoor writer, David Sikes, Everett and Pam Johnson of Texas Saltwater Fishing Magazine and the Padre Moon play a very big role in getting the word out to the public. Coastal Bend Audubon Society and Mr. Ben Beatty are very much appreciated by the entire staff and a big thanks to all our friends and comrades from the National Park Service at PINS.

That was so much fun I think we'll do it again next year.

Throughout the majority of the winter months slot-sized black drum can be caught in the deep, wade gut of the Big Shell and in the vicinity of wrecks along the beach. Cracked crab claws, sea lice and dead shrimp and Fishbites seem to be the favored baitsand pretty much in that order of preference. This is the one species that prefer old and half rotten bait over fresh-dead and I save second-hand bait for them in the spring. In late February, March and April there can be some really fun fishing in the Port Mansfield channel for oversized black drum. Just take the trail going alongside the channel, put out a couple of rod holders at a productive appearing location, cast out, break out the lawn chairs and kick back and wait it out. When the rod bends steeply get up and get at him. This is wonderful sport on light tackle; especially if you have teenagers or novices in your party. These drum tend to just run back and forth in the channel and can be caught on light tackle and probably average 28 pounds, so for a novice angler or teenager this is the real deal. One word to the wise; we only catch them when the wind is at our backs, coming from the north. We don't catch them on south wind.

Sheepshead more often congregate around jetty rocks and wrecks rather than on a bare sand beach. They are among the best bait stealers in the business. Long-shank hooks are recommended as sheepshead have extremely functional teeth and will sever mono line. The best bet as bait is live fiddler crabs although they will also hit dead shrimp. Inquire at bait stands as usually someone around the jetties is selling them. Small black drum can be mistaken for sheepshead but if it has obvious teeth it's a sheepshead. Be careful handling sheepshead as their dorsal and anal fins are as sharp as spikes and never put your fingers in their mouth.

Very few flounder are caught in the surf and the few caught are usually in the vicinity of wrecks in late summer. Near the jetties is your best bet. The very best bait for flounder is live mud minnows (killifish) with small finger mullet coming in second. Now let me tell you the trick about flounder in the surf. While we rarely catch founder in the surf it's common for me to encounter 3-5 in shallow water as I walk out to cast. We fish too deep for the flounder. They are laying up extremely shallow and one would be better off walking along the water's edge with a small lure and sightcasting them.

This species is unusual in that years ago we didn't catch them in the surf. They have spread into the surf zone in the past 15 years. We catch them on various baits and even occasionally on topwater lures. They congregate around wrecks and structures. Five pounds is a big one in the surf.

Well the Good Lord has seen us through another long winter, known as "the time of the starving moon" at my house and I can't say I'm going to miss it one bit. I want to go slug it out with a jack crevalle. What a hoot!

If we don't leave any, there won't be any! -Capt. Billy L Sandifer