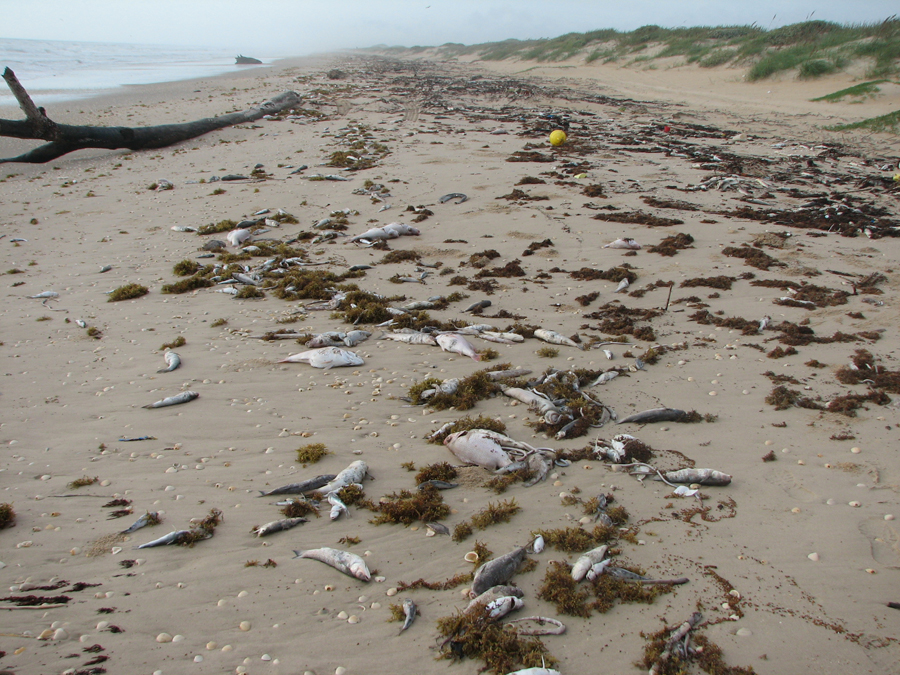 Red tide is a killer.

Every time we get a red tide bloom folks begin asking what causes it; my reply is always the same, "we get the red tide when it stays too hot and too still for too long." There is plenty of info available but in the final analyst that is probably as good an answer as any. If you want a more technical explanation you can read the various pages available on TPWD's website.

The red tide was present on PINS from October 3 through 23 of this year and did its typically effective job of killing lots of fish and making beach users miserable. I am always shocked when I see the number of fishes and the diversity of species that this natural phenomenon kills. Add to this the stench of the decaying fish and the respiratory irritation the aerosol brings and what you end up with is one of the least desirable of coastal experiences you are likely to encounter.

Decomposing hardhead catfish are washed back and forth by the tides and the tires of many unknowing beach drivers fall victim to their spines. The majority of these flat tires will be sidewall punctured and therefore not be repairable. But one of the benefits of living as long as I have in this ecosystem is not to be too distressed by it all.

Overexposure to the aerosol effect of the red tide over a period of many years has made me strongly allergic to it so I wear a gas mask when I am in affected areas and I don't charter when an event is in progress. Instead, I take a timeout and allow the event to run its course.

In a relatively short time frame the high tides of fall push the dead fish up along the fore dunes and smooth out the fore beach and make for some of the best driving conditions of the year. Live bait and lures once again receive jolting strikes from redfish and jack crevalle and the red tide becomes a vague memory even though it is only 5 days behind us. I stand in awe of the wonder of the Natural World and how quickly it heals and goes on as if something that I thought so shocking had never happened at all. Awful cool stuff.

There has been a war going on in Corpus Christi for some time over the City Council's proposal to close 1.3 miles of public beach to vehicular traffic. The closed area would begin immediately to the south of Packery Channel. This action was initiated to satisfy the requirements of one developer who wanted the beach in front of his PROPOSED development to be "traffic free." It has taken a tremendous amount of effort by concerned citizens fearing this will lead to more beach closures to get enough signatures on petitions to have this issue included on the November 7 election ballot. Due to their direct efforts a second item was also placed on the ballet stating that from now on a vote by the citizens would be necessary to close any other beaches within the city's jurisdiction. The proposed amendment to close the beach failed in yesterday's election and the amendment to require a vote by citizens before any beaches could be closed was passed.

An organization called BAC (Beach Access Coalition) with the aid of the Surf Riders.org spearheaded this tedious and time consuming task and I would like to personally thank all of these hardworking volunteers who have given so freely of their time and efforts to bring this important issue to the attention of residents and to insure citizens will have a vote in the future whenever our local beaches and their usage are being challenged. I would like to especially thank Mr. Johnny French, who has fought tooth and nail for these issues to be on the ballot. He also did a wonderful job of keeping the saltwater fishing community informed throughout the whole process. Congratulations on good work well done.

There was a head-on collision on the beach, 100 yards south of the pavement's end on PINS on October 29. A rented SUV pulling a jet ski on a trailer at excessive speed in broad daylight drifted across the beach front near large
camps and hit longtime beach fisherman, Allen Ricketts. Allen was headed down the beach in his pickup, luckily no one was seriously injured but the potential can instantly be realized. Sooner or later vehicles are going to slow down on PINS one way or another. Personally I wholeheartedly hope it is through our own efforts and not those of regulatory organizations.

It's interesting to me how so many things keep coming back to that ol' one liner that my high school biology teacher passed on to me in my youth and that I have passed on to you in previous articles. Adapt, migrate or die is the story of the history of life on planet Earth. As circumstances change, so must we all if we are to continue to exist. And so it is concerning the future status of the beach driver. If beach drivers are to continue to exist, then they are going to have to modify past behaviors and one of these behaviors is that they are going to HAVE TO SLOW DOWN.

The vehicle and driver involved in this collision apparently exhibited some dangerously unsafe driving behavior while traveling through camps located farther south prior to the accident and in at least one case exhibited some real bad manners to go along with it. Had Park Rangers been notified by cellphone at that time they may well have intercepted him before the collision took place. Get the license number and a vehicle description and report speeders and other dangerous and inappropriate behavior to 361-949-8173. Cell phones will typically work from atop most of the tall fore dunes all along the beach. You may have to try several times or even from 2 or 3 different locations but usually you can get a call out. If I am in the area, feel free to stop me and I'll be happy to a make a call on my satellite phone. Just make sure the information is correct before doing so. I come from a time and culture where "nobody likes a snitch." Guess what? That is another of those behaviors and attitudes we are going to have to change if we are going to survive. Poachers are thieves are stealing from all of us and speeders and those driving dangerously and/or in the dunes are not only endangering those around them as individuals but they are also endangering our continued rights to utilize these precious areas. Protect your beach use rights by reporting violators.

You know it occurs to me frequently that I am an ol' time story teller and a fishing guide and I would sure rather be writing about fishing and experiences we've had recently than writing the type material in my past two articles but the reality of it is that it must be done and who else is there to do it. The Gulf Coast Connections crew is the only outfit I know of that realizes how important it is to attempt to get the message across and is willing to give me the space to do it. Heck, winter is upon us and I'm supposed to be telling y'all to move the lure s-l-o-w-l-y in every paragraph. Ha. Happy Holidays and remember life is a hoot if you let it be.

Be Courteous, Be Careful, Be Kind!
Capt. Billy L. Sandifer