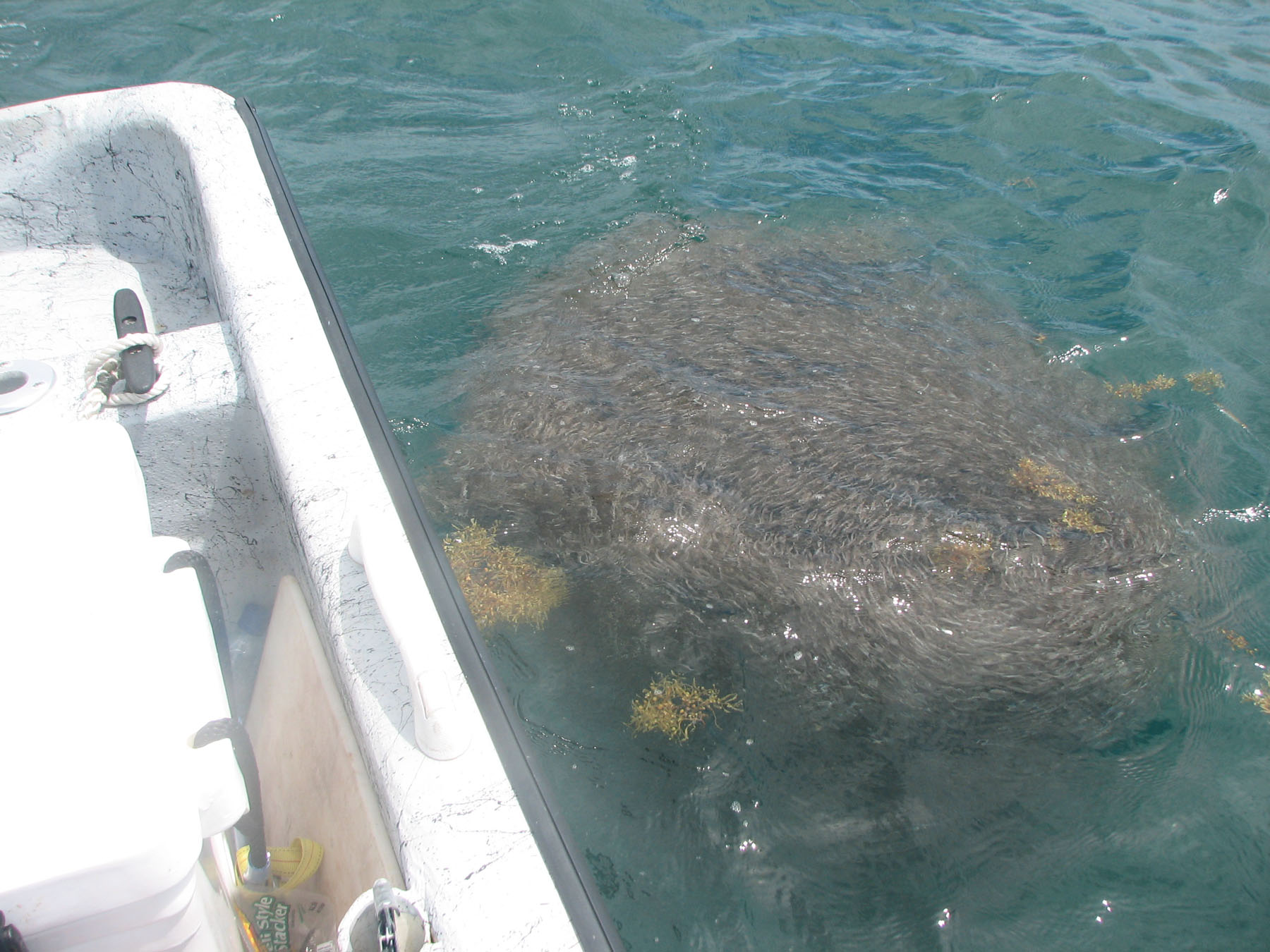 If you haven’t seen one, this is what a ball of anchovies looks like.

When I was getting the 25' Panga ready for charter service I knew that retaining the Yamaha outboard the Mexican drug-runners had powered it with was a gamble. Being a responsible and rather prudent individual who takes the title "Captain" seriously means that the safety of my customers is always foremost in my mind. Therefore I have kept trips rather close inshore until the outboard proved itself. Well, on Saturday September 1st on our way out the Port Mansfield Channel the bet was called; the engine sealed its fate by blowing a hole in the block. Still 1-mile inside the jetties, I called Capt. Mike McBride for assistance and settled back to enjoy the spectacle of a steady stream of boats passing us, heading offshore. We were in no danger unless someone ran over us and there was no great reason for concern with help on the way.

I took the opportunity to observe the behavior of passing boaters. Some whizzed by waking us without a turn of the head, and others pulled to the far side of the channel and ignored us at top speed. A good number of boats, including several large cruisers, slowed politely and idled past. Some stopped and offered to use precious time from their holiday weekend to tow us back to port. I'm not judging any of these individuals. We were in no danger and none of them owe me anything. I found it interesting that their reaction to our situation covered the full spectrum of human behavior from impeccable courtesy to "I couldn't possibly care less."

With the large and growing number of boats on Texas coastal waters there is plenty of opportunity to encounter lots of folks who exhibit each of these attitudes. The courteous and kind bring a smile to our faces and are acknowledged with a friendly wave. The couldn't-care-less crowd continues to ruin our drifts and wades and carelessly "burn" miles of shoreline others are trying to fish. Regular users of our waterways are all too familiar with this and I think it's high time we take on-the-water ethics up a notch.

Long term surf fishers tutored me in the accepted rules for both traveling and fishing on the beach. When they pointed out a group acting inappropriately they told me what they were doing wrong and why it was wrong. When I inquired what could be done about it, they replied that often they would stop and, in a friendly manner, advise folks that others were not going to appreciate certain of their behaviors and explained why. Then they'd usually throw in a tip as to what tactics/baits had recently been most productive to keep things positive and to help establish a rapport with the newcomers. If it became obvious that the individuals in question fell into the "couldn't care less" category, they were wished a nice day and left with the stern statement, "What you are doing here is wrong."

When I asked if that was the end of it the ol' timers replied, "No, we just ignore them after that. No one teaches them anything. Thusly, with nobody to teach them how to fish they don't catch many. If they get in a jam they will only receive a bare minimum of aid. Being generally unsuccessful, they don't last long." This concept of self regulation within the user group worked extremely well until internet and fishing message boards appeared.

All at once mountains of information became available to any and all, which certainly includes the couldn't-care-less crowd as well as the courteous and responsible users. Anyone who feels a need to have strangers consider him a saltwater fishing guru can simply monitor several message boards for a few months, take notes, and then begin giving advice to others just arriving on the scene. What's crazy about all of this is that the advice giver may live in Ohio and never set foot on a Texas beach or fished in a Texas bay. Thusly, the creditability of information goes straight down the tubes and it becomes the misinformation age.

Now let's talk about fishing guides and their role in this internet scenario. There are a large number of saltwater fishing guides in Texas and competition for clients is keen. Newcomers to the guide business are especially hard-pressed to get their name out there and begin attracting a clientele. After decades of doing television outdoor shows and being featured in countless newspaper and magazine articles, not to mention writing and doing lectures, the majority of my customers continue to be repeats and referrals from past customers.

Although internet is by far the fastest and cheapest way to advertise your services to the largest number of people, it actually comes at a dear price. The more self-promotion a guide does on internet, the more pressure he brings on a particular area or fishery and, often, it is an area or fishery already overburdened by the number of current users. The reality of it is that the more guides promote certain locations, the tougher the fishing becomes there.

Several non-productive charters as the result of crowds that read your stuff on the internet will quickly outdo any good the internet promotion may have originally done. And what about the fishermen who learned of the spot and were enjoying it long before the internet guide who is basically fishing for customers told the entire world how many he caught there yesterday? More than likely he is going to arrive at his sweet spot to find it looking like a boat dealer's parking lot.

It is for this very reason that you will most likely find the fishing report on my website outdated. I made my mind up many years ago that I would not put my personal gain over the well-being of the resource. I call it turning the wolves loose. I've observed for years that one good fishing report on internet can dramatically increase the number of users the following weekend and that traffic can ruin the fishing. The crowds are their own worst enemy; their very presence brings an end to that which they seek. So, the fishing is good but the catching varies from day to day. So do the conditions. But we're still having lots of fun most days and there's not a whole lot of people down there.

Customers John Caldwell and Rex Reitz found a Green Sea Turtle nest containing 105 eggs on 29 Aug. Probably the last one of the year.

Life's a Hoot. Get out there and enjoy it responsibility. Be Careful, Be Courteous, Be Kind