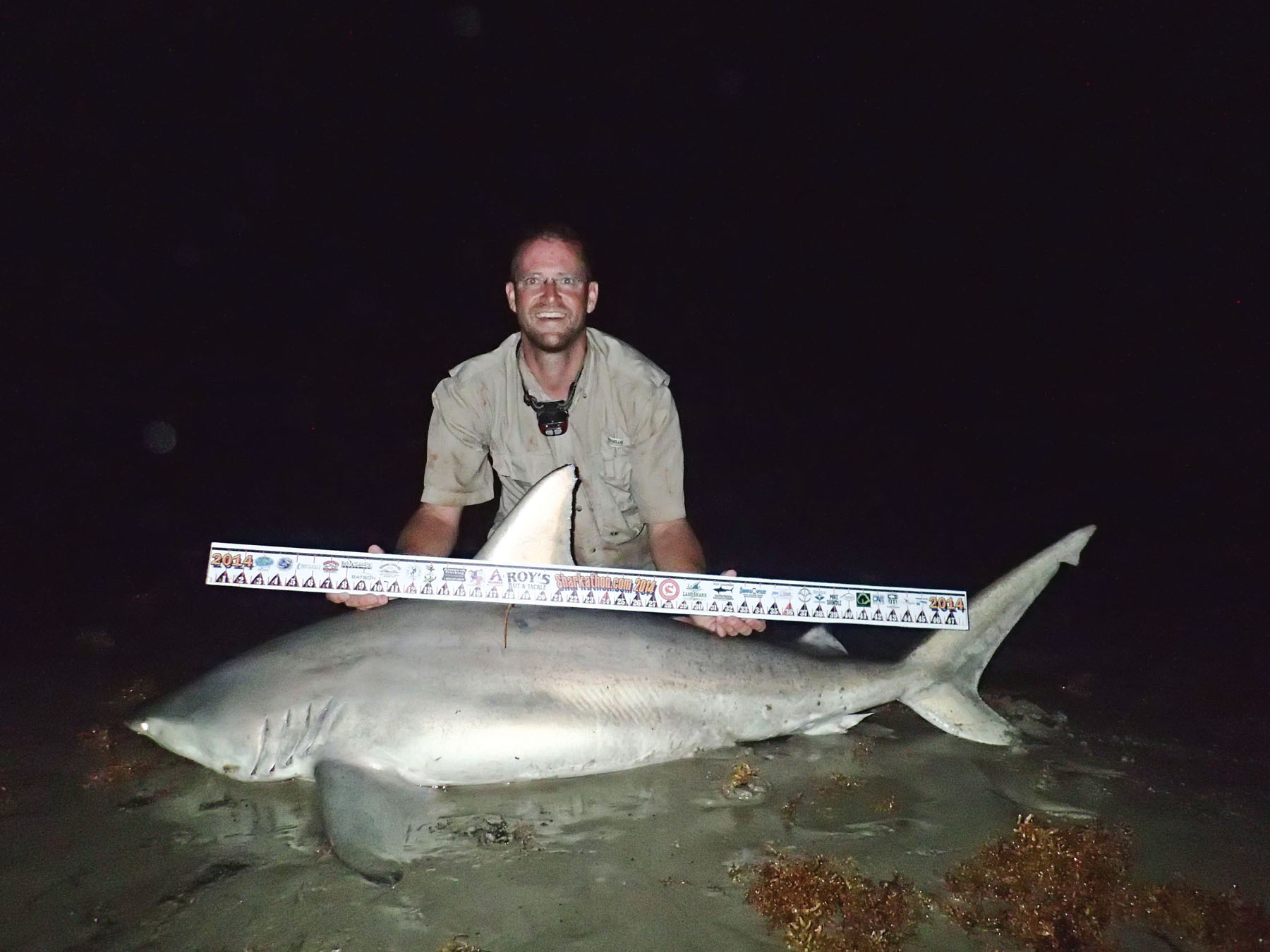 Sean Curless - 1st place shark - 74 inch blacktip.
We all know it's a crap shoot when we schedule outdoor activities in advance but, such is the nature of fishing the coast. The Eleventh Annual Sharkathon fell squarely into bad weather with wonderful conditions both before and immediately following the event. This year they had an amazing 955 contestants registered.

The event was challenged with 40+ mph wind, driving sheets of rain, roaring 4-6 foot seas and water pushed up all the way to the sand dunes. I'm still curious as to why the feds didn't close the beach as traditionally when the water goes to the dune line they have always closed it. While some contestants gave in to the conditions, others braved the formidable weather and surf to fish the entire event. Remarkably, a total of 27 sharks were landed.

Sean Curless won the shark division with a 74" blacktipped shark and also won the prize for the most inches of shark landed. Shawn walked away with over $20,000 in cash and some high-dollar prizes. He has been a section leader in the Big Shell Beach Cleanup for the past two years so maybe some of that karma is working for him.

It had to be quite dangerous attempting to get baits offshore in the stormy conditions and it was a real test of skills to get a kayak through the surf. I know some that wore life jackets and swam their baits out. Must have been one heck of a show all the way around. Curtis Mai and Todd Neahr ramrod this event and I don't know how they do it. My hat's definitely off to them. Sharkathon is a 100% Catch & Release event and their website is Sharkathon.com.

Speaking of the Big Shell Cleanup, the next event is on the books for 28 February, 2015... for all you karma seekers.

I have been associated with shark fishing for 55 years and I've watched changes in the culture of the sport as it continuously evolved as well as the tremendous upgrades in equipment and tactics that have come into play. Newcomers maybe don't realize it but there are more sharks caught now than there ever were. The notable difference is that they've decreased in size.

Eight-foot and longer bull sharks were relatively common in my youth but are only rarely encountered now. There is however a very good number of 5-6 foot bulls. Problem is, we are told, bull sharks reach sexual maturity and begin to reproduce at about 8-feet length and the first sign of a fishery in trouble is an absence of breeding sized adults.

In my youth we did not fish for 6-foot sharks–we fished for monsters. As such, most of our baits weren't appropriate for the 5-6 footers so commonly caught today. In all probability they could have been there in the same high numbers all the time and we were missing them.

And of course there were never the numbers of shark fishermen that there are today. The greatest part of the cultural change is that while we killed everything we caught back then; nowadays almost all fish are released. So–in light of the present shark fishing culture–while we may have lost the majority of fish that should be the backbone of the breeding fishery at present, I have to believe it is sure to improve very shortly. The day may come that I will again enjoy sight-casting to a 6-footer on medium tackle in the wade gut but for the most part I just love to watch them as they feed in the shallows as I travel the beach.

News for beach-fishers; Kleberg County gave control of the 3,680 acres south of Bob Hall Pier to Nueces County. There are many deed restrictions that deal with what can and cannot be done with this piece of property, so we'll just have to wait and see what develops. The goal is to keep this land in its natural state...

Friends of Padre funded and installed a water fountain at South Packery Park. We didn't want the public at large to think we were only concerned about the National Seashore. In their infinite wisdom, and without a reason, the U.S. Postal Service closed down our fully paid-up POB some two months ago. So anyone who attempted to send mail to Friends of Padre was likely unsuccessful. The situation has been corrected and feel free to mail correspondence or contributions to Friends of Padre - P.O. Box 18108 - Corpus Christi, TX. 78418.

My friend, Scott Nelson, recently landed a 13-foot 3-inch greater hammerhead shark from the beach of PINS. That breaks the record for the longest shark landed on PINS (13-feet 1-inch) caught years ago, although the old record fish was a tiger and likely weighed more than Scott's hammerhead.

The hammerhead fought two and one half hours and Scott saw bare spool on his reel three times. Although every attempt was made to release the fish alive, it unfortunately died. Giant hammerheads are renowned for fighting to the death. After chasing a mammoth one in Cuba for two years I decided I no longer wanted to kill a big hammerhead. I guess I'm the only shark fishing guide who used to pray he did not hook a big hammerhead for I didn't want it to die. In my youth we were knights and sharks were dragons and it was all about being a hero and slaying dragons. That's an awful long way from the culture today although I'll bet there is still a lot of that knight and dragon stuff going on. Thankfully, the greatest majority of modern day shark anglers are happy to count coup on them instead of killing them.

All my life people have asked my advice regarding the best time of year to go surf fishing. My reply never changes; it's the opening day of dove season. Fall is the time of harvest on the sea as well as the land and if you put your fishing tackle away when the guns come out you are missing the best fishing of the year. Obviously you have to dodge cold fronts but late fall and early winter really is an exceptional season on the beach. The two largest tiger sharks I was ever around were caught in November. I always figured these apex predators were like lions following game across the African plains; craftily shadowing the herd and picking off the old, weak and sick.

Shoals of large Jack crevalle come to shore to pursue migrating finger mullet most mornings, the biggest Spanish mackerel of the year are likewise feeding on the mullet, and the pompano are at their peak abundance of the year. All good reasons to do some serious fishing along with your hunting this time of year.

Heading down the beach, you want to make sure you have all your emergency supplies with you as the summer crowds are gone and if you break down you could be there a while.

It's a hoot! Get you some of it and have a good Thanksgiving and Christmas.