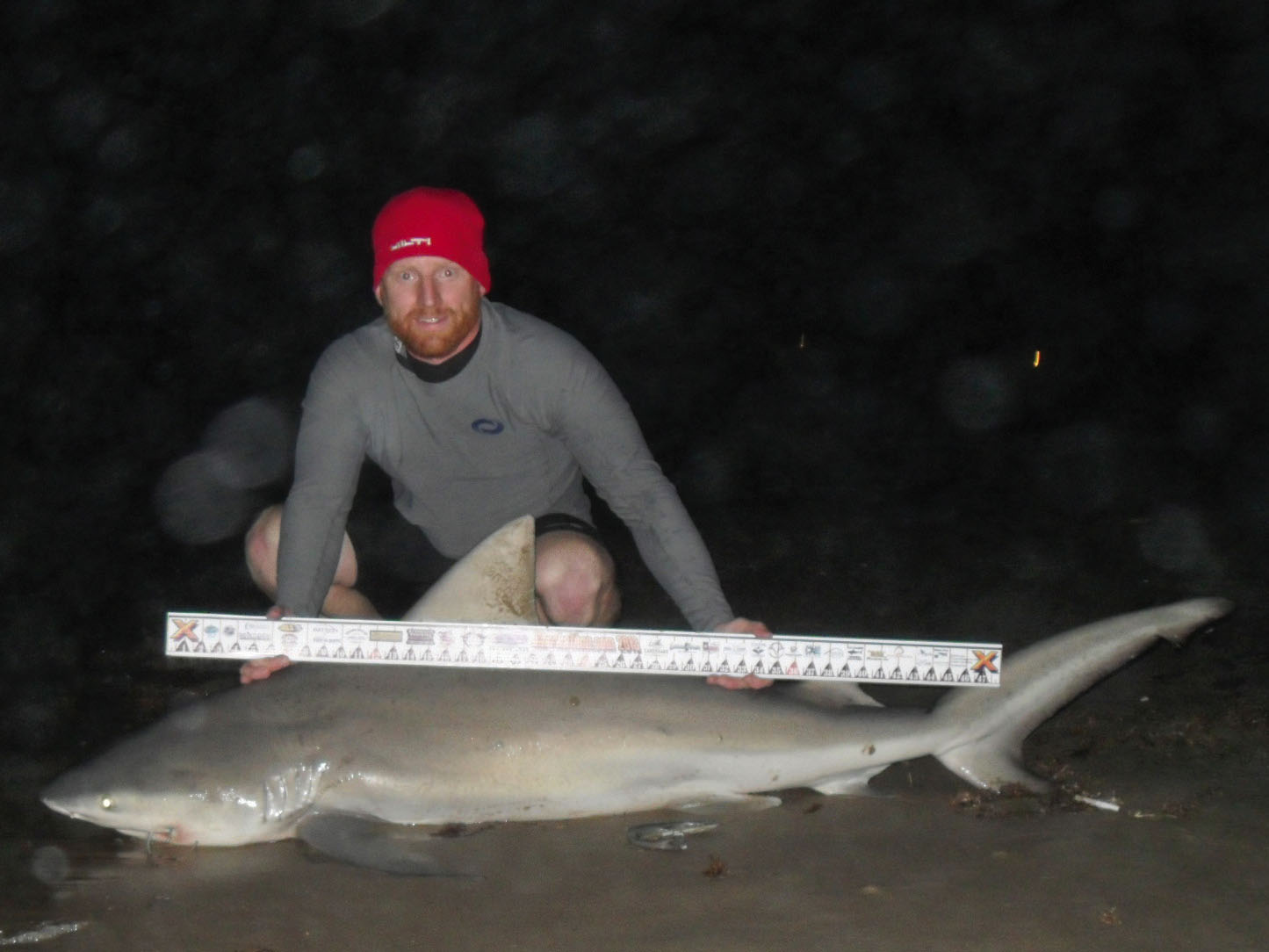 2013 Shark 1st Place: Peter Burgess
I distinctly remember coming in off a shark fishing trip down the beach and being quite depressed as I listened to the weather on the television while my wife cooked supper.

She asked why I was so gloomy and I replied, "Well, I always figured on being a shark fisherman 'til I died but it never occurred to me that I'd be the last one left on the beach, and it's almost down to me being the last one. It's not as much fun when you're the only one and you actually get kinda lonesome."

There were a small handful of occasional weekend shark fisherman but there really weren't any hard chargers. Within two years David Williams (AKA Beach Bum) had started a shark fishing message board on the internet and the days of feeling lonesome became history as hundreds of shark addicts appeared overnight. It's been that way ever since and I anticipate it will remain that way from now on.

Sharkathon's tenth annual tournament took place in horrible fishing conditions recently with 850 participants. My God, that's a lot of people and they are tough and fish hard. These folks will kayak baits off the beach in almost any conditions.

I owned the third kayak I ever saw on Padre Island and now they are as common place as rod racks on beach vehicles. BTW (Beyond the Breakers) game fishing from kayaks is a fast growing sport in addition to everyone hauling shark baits offshore in them. As the numbers of users increase more accidents are bound to happen and actually I am totally clueless as to why people haven't been killed while using them on PINS already.

There were rough seas during Sharkathon and Steve Schubert got knocked out of his kayak on the second bar while taking out a shark bait and ended up with a 20/0 circle hook stuck in his neck one centimeter from his jugular. Other members of his fishing team kayaked out and helped him in but Lady Luck sure favored him as well. If that had been a traditional J-style hook, my bet is it would have punctured his jugular and he would have bled out very quickly.

We always cut squares out of old flip flops and used them as hook plugs covering the points of our hooks to avoid such situations. A piece of Styrofoam or even a popping cork will also work but just doesn't hold together as well. Stick the point in past the barb and then twist it a half turn to hold it in place. Steven turned down a Coast Guard helicopter ride and drove back to town and to the hospital with that hook still stuck in his neck, the point deeply imbedded. Man, if that isn't a fish story to tell for a long time it will certainly be hard to beat.

I am well aware that at times some of what I write is repetitious but the honest truth is that it's important enough it needs to be heard more than once. I admire Brother Jay Watkins reputation as "the teacher" and maybe I envy it a bit as well because I see myself as a teacher as well but it seems like folks fail to mention that concerning me. Maybe it's because Brother Jay is a gentleman and I'm often accused of being a cross between a badger and a jack crevalle.

The surf is dangerous. It is savage and it does NOT care if you live or die. Then when you take into account the many added dangers of shark fishing and hauling baits through rough surf, you are literally taking your life in your hands every time you go fishing. Make sure you engage your brain as well because your hands can do little to help you unless your brain is making good decisions for them. No place, anywhere, no time and no how, is there any fishing half as tough as shark fishing in the surf.

Sharkathon is the only tournament in the world that I endorse and I hope it fathers likeminded catch and release tournaments, just as the Big Shell Beach Cleanup has fathered any number of other cleanups on various beaches and lakes. This year; in conjunction with the Guy Harvey Research Institute, thirty-three fin clips were turned in for research from the forty-five sharks landed during the event. Mike Shindle of Granite Ranch and David Mata of Bimini Rods donated a three-speed AVET 80-Wide reel on a custom rod as a prize drawn from the names of those turning in fin clips.

Definitely a weekend of high adventure for the Sharkathon participants, Cris Happel's team looked up to see a sailfish swimming in the wade gut in front of them and walked out and billed the fish, made photographs, resuscitated it, and returned it to the roaring surf. The OFFICIAL winner of the shark division was Peter Burgess with a 6' 2" bull shark. Curtis Mai and Todd Neahr organized and carried out this event by themselves and that is an unbelievable feat within itself. My greatest congratulations go out to them on a massive job well done.

There is a lot of interest currently concerning the 3,860 acres of land located between the Nueces County line and the National Seashore. Plans recently surfaced that the General Land Office had intended to sell the property to the Nature Conservancy, which in turn was going to sell it to the feds. Then it was rumored the feds intended to limit access from the north end of the beach and the General Land Office stopped those plans. Now we are told, plans are underway to sell it to group with the intentions of turning that land over to Nueces County, even though it's located in Kleberg County. The local National Park Service says they have not been contacted by anyone concerning the matter so it is impossible for them to have commented on any intentions for the property. There are obviously a lot of smoke and mirrors in play concerning all of this and I just hope the citizens don't come up the loser on the deal. It's hard to evaluate who to trust. Nueces County has attempted to close sections of beach in the past and, to tell you the truth; I personally do not trust ANY of them.

Eight hundred fifty participants in SharkathonWow! Now if I can just figure out how to get them to show up for the Big Shell Beach Cleanup - 22 February, 2014. Updates will be posted regularly on our web site www.friendsofpadre.com.