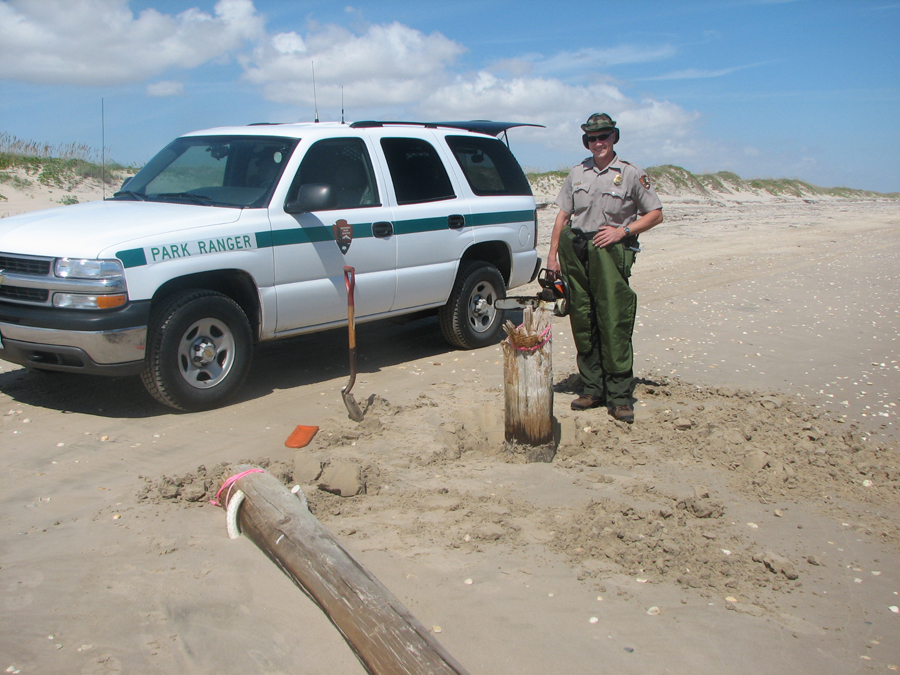 The Coastal Bend Bays Foundation has chosen me and my business (Padre Island Safaris) to receive one of its annual Conservation/Environmental Stewardship Awards this year. I was chosen to receive the Small Business Award for leadership for placing a high priority on protecting the region's environment. The main focus for the award is the Big Shell Beach Cleanup with various other odds and ends thrown in.

Y'all might have figured out by now that I don't require a lot of personal acknowledgment or praise to do what I believe in, but I will humbly accept the award on the behalf of every hardworking and overlooked volunteer who has given of their time and energy by participating in these events over the years.

My thanks to the Coastal Bend Bays Foundation for acknowledging the efforts of these volunteers who by their very actions stand out as exceptional examples to all. My personal thoughts at present are consumed with escalating problems existing currently on PINS beaches and with very real concerns for the future of the usage of the beaches of PINS rather than sitting around patting myself on the back. I'd like to share some of them with you.

The number of visitors utilizing the four wheel drive beach of PINS on weekends is increasing at a mind-boggling rate. Unfortunately the rate of speed while driving on the beach and the lack of consideration for other beachgoers and the creatures that inhabit the area are increasing at a similar pace. I recently read a long "thread" on a well-read internet message board where beach users were deeply distressed at the number of vehicles careening through their camps at high speeds. The accounts indicated that vehicles often come dangerously close to small children, pets and the camps themselves. Then the thread turned to means of protecting you and your family from such vehicles. Digging trenches across the traveled roadway were discussed as were other, more threatening, measures.

Whoa folks! Let's take a deep breath and think about all this. How 'bout we leave road rage in town and work on keeping the beach a place for people to come to enjoy nature.

The solution is simple; get your foot off that gas pedal. Speed limit is 25-mph on all Texas beaches unless it is posted as less. The northern stretch of beach nearest the end of the pavement is posted as 15 mph. Slow down when approaching camps and be alert at all times for the unexpected movements of children, pets and others.

Digging trenches is illegal and dangerous. One of the problems with this practice is that most of the trenches remain after the people leave. Realistically, these folks are leaving booby traps scattered along the beachfront.

Others are intentionally blocking the roadway to force folks to go around their camps. This practice increases bad feelings among beach users and is not the answer. If you feel that you must do this, we ask that you at least insure there is a safe driving area around your camp so that we can pass without having to drive over old lumber full of nails and other trash. There are many battles ahead for continued use of the beach and dividing our forces now over issues such as these is a move we simply cannot afford.

We, the beach users, must work out practical solutions to these and other problems or they will become ammunition hurled back at us by those who want to eliminate driving on the beach. I'll bet you on that one!

The Sharkathon-3 Tournament has come and gone with 219 entries. Overall it went well, but it was not without some growing pains that need to be addressed. It must be remembered that neither the overall number of participants nor the amount of prizes given will ever qualify an event as a success. This event started and continues as an "eco-friendly" event and steps need to be taken to insure that this premise remains foremost in the mind of all participants.

Emphasis on bringing out trash seemed less of an issue in this year's event and one extremely trashy campsite remained immediately south of the 25-mile dune after everybody pulled out. Unbelievably, as least to me personally, there was also an incident of coyote fishing discovered during the event. I do not know whether the individuals involved were participants in the Sharkathon but the timing is bizarre.

For those who may not know, the practice of coyote fishing has popped up every now and then as long as I can remember. One individual went to the Federal Pen over it several years ago. It involves the unimaginable practice of baiting a large J-style hook with a piece of meat or fish and taking it out behind the dunes on the National Seashore which is also a game refuge. A foraging coyote eats the bait and hook and is cranked in on the rod and reel and beaten to death with a shovel or other instrument. I can't explain why because I have never been able to fathom it and I've been in some awful tough places filled with some rough ol' boys.

Malicious mischief is appearing down south for the first time in many years. It seems this latest round started with individuals moving the data markers at ridley turtle nesting sites and has now escalated to the point where the post marking the 26-mile beach and the official 55-mile marker post have been chopped down. I recently came upon Park Ranger Jason Lichtblau digging out the stump of the 55-mile marker post. Jason then cut it off below ground level with a chain saw to insure no one ran into the butt end which was left sticking several feet out of the ground by the vandals who chopped it down.

It angered me to think of the wasted four hour drive in a government vehicle through bad driving conditions by a park ranger with plenty of other tasks to accomplish. All this because someone couldn't find anything better to do in this natural wonder but chop down one of the mileage posts put there for his benefit. WHAT'S UP WITH THAT?

The amount of trash left by visitors is at a higher level today than I have ever seen in my life. The beach immediately alongside the Port Mansfield jetty now resembles a garbage dump on most days in spite of the efforts of various PINS volunteers, yours truly included. We simply can't keep up.

The newest wrinkle seems to be camping for several days and then just up and leaving your entire camp behind and going home. I'm talking general camp trash, tents, tarps, sleeping bags and the whole shebang. Tried to figure that one out and what I have come to wonder is maybe folks bought that equipment for this one single outing and have no other use for it. So rather than take it home and stow it, they simply leave it there.

This past weekend a long time annual "kill" tournament took place on PINS. While many of the camp sites were spotless; far too many others were littered with trash. For seventeen years they have been having this tournament in one of our nation's National Seashore treasures and still they leave it littered. They have also ignored pleas to take a stand and participate in the annual Big Shell Beach Cleanup for over a decade although they are the single one biggest user event of the area.

Tournaments bring additional visitors to PINS. As such; the organizers of these events are personally responsible for the conduct of participants for they are the ones who brought them there. A certain amount of policing of these events must be done by organizers if the events can ever gain credibility as responsible users of this resource.

If you encounter dangerous speeders on the PINS beaches, get their vehicle license number and report the incident to PINS personnel at 361-949-8173. Same holds true for individuals observed in other illegal activities. It's your beach; help be a part of keeping it safe for everyone to use.

Be Careful, Be Courteous, Be Kind!
-Capt. Billy L. Sandifer