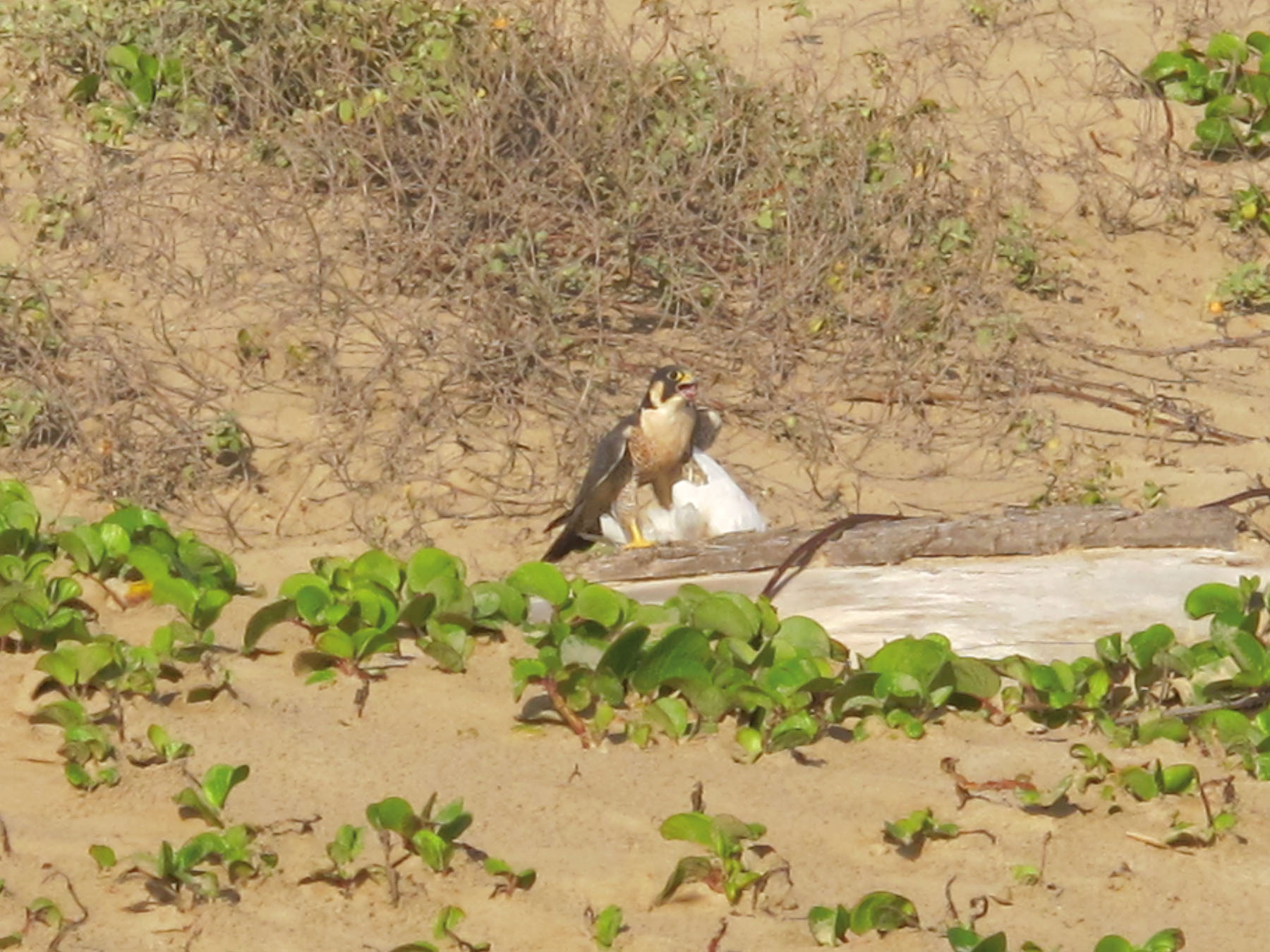 Peregrine on PINS about to devour seagull. James Clark photo.

I spoke about wearing waders in the surf last month but decided I needed to say more. I told you that my personal preference is the breathable style and how they are inherently much safer than the heavier boot-foot models, but there is more to the story. I also want to make sure that you understand the basic year around versatility the breathable waders afford.

I can choose anything to wear inside my breathable waders from shorts on hot days, to layers of warm clothing on really cold days, thus making the breathable wader the choice for all seasons. While staying warm is the first thing that pops into our minds when we think of wearing waders it is by no means the only reason for wearing them. I don't know about you but it seems I stay banged or scratched up about half the time, and smarter now than I used to be, I'm not going to wade "wet" in water that may contain flesh-eating bacteria if I have open cuts, punctures or blisters. I'm going to put on a pair of lightweight waders over a pair of shorts and know I can concentrate on my fishing rather than worrying about winning a Darwin award.

Another valid reason for wearing waders or at least long wading pants is what we call burning jelly. When somebody mentions stinging jellyfish most of us immediately think of the Portuguese man-o-war but it's not the only game in town. The sea nettle is quite common and we also occasionally see the box jellyfish, neither is as easy to spot when you are fishing as the man-o-war, and when the surf waves wash back out from the sand these jellies can wrap their tentacles around feet and legs. There are times and tides when these pesky creatures can be abundant. It's interesting; the book says these are mildly toxic and that is true for the ones I encounter in the surf but the ones on the west end of Baffin Bay burn more and will make for a short day's wade for any angler wearing shorts. Maybe it is the higher salinity back there. I've had anglers wearing shorts have to get completely out of the water and fish from the dry shore due to the presence of jellyfish. Obviously you don't pay a guide's wages to fish off the shore so give it some thought.

On one occasion I was hit by a very small species of jellyfish that was far worse than the others I've encountered. The first time I ever took Tyler Thorsen and David Gardner surf fishing I was knee deep and felt a sharp burning sensation and looked down to see a totally clear, oval-shaped jellyfish a little over an inch long bump off my leg behind my knee. I stumbled out of the water and knelt on the shore in severe pain. Tyler came up and asked what was wrong and I told him I didn't know what it was that had stung me but it wasn't supposed to be in the Gulf of Mexico.

A large welt appeared across the inside of my knee and a large kernel instantly formed under my arm. I was sick at my stomach and dizzy and the pain was intense. I told Tyler I was going to have to walk constantly to bear it and I did for the next several hours when not driving to another fishing location. At times I'd have to drag my leg as I couldn't bend it.

Tyler is a great guy and badly wanted to help. I told him, "We're 37 miles from the pavement and there's nothing to do but live or die. You know how to drive a 4-wheel drive so if I die just throw me in the back of the Suburban and keep fishin'. Take me to town before dark and pay my wife my wages as I've earned them."

I never knew what it was that stung me that day but have always felt it was a stray exotic not normally found in the inshore Gulf and I sure don't want another one to sting me. That would have been a great time to have been wearing waders.

While on the subject of burning jellyfish I'll take the time to tell you that in my experience the best product we've found to reduce the pain is not meat tenderizer as so many claim but acetone. We have used acetone for decades since an old wind sailor told me about it. Saturate a paper towel thoroughly and gingerly clean the affected area. Then throw the towel away and wet down another one and do the same thing. Never use the same towel twice to avoid spreading venom and it may take three or four cleansings but it relieves the pain better than anything else I've seen or heard of.

I guess I should be an authority on skin cancer. All the way back to my high school years growing up on Bob Hall Pier; our uniform consisted of hat, trousers or shorts, and no shirt or shoes. The hat was not intended to protect us from the sun but rather to enhance our ability to make out objects in the water in the bright sunshine.

The lack of shirt and shoes was a cultural thing. Cool guys didn't wear a shirt or shoes, and God knows that above all else we were cool. Much cooler than when they gave me those thirty-two shots of Lidocaine last year between my nose and upper lip prior to removing a skin cancer.

The statement I have heard too often from the dermatologist is, "This isn't the result of anything you've done recently. This cancer is the result of over exposure to the sun years ago." So, the bottom line is that wearing appropriate protective clothing in our early years is extremely important.

As I drive along the beaches of PINS I observe that the younger generation now days is just as bullet proof as we were during that time of our lives so I guess skin cancer will continue to provide the dermatologists job security. Forearms and backs of the hands seem to have more skin cancer than other body parts. They develop a scaled appearance with numerous small protrusions visible. They dry and peel away leaving tender spots and aloe vera or some other good skin moisturizer will lesson this drying and peeling effect and the itching that accompanies it as well but you really need to have them checked by a skin doctor.

I very rarely wear work gloves (to a fault) and the idea of lure fishing wearing gloves is totally alien to me but as years go by I've noticed the back of my hands get exceedingly hot during the day. And I realized it was a simple case of my skin having gotten thinner as I aged and I started wearing gloves because I was more comfortable and could concentrate better on my game wearing them than not.

Reading back over this it at first seems a very negative article but actually it isn't at all. If we are going to do a "How To" series it's high priority stuff to explain the dangers and steps that we can take to protect ourselves from them. We've got a few more to go and then we'll get back to catching fish.

If we don't leave any there won't be any! -Cap'n Billy