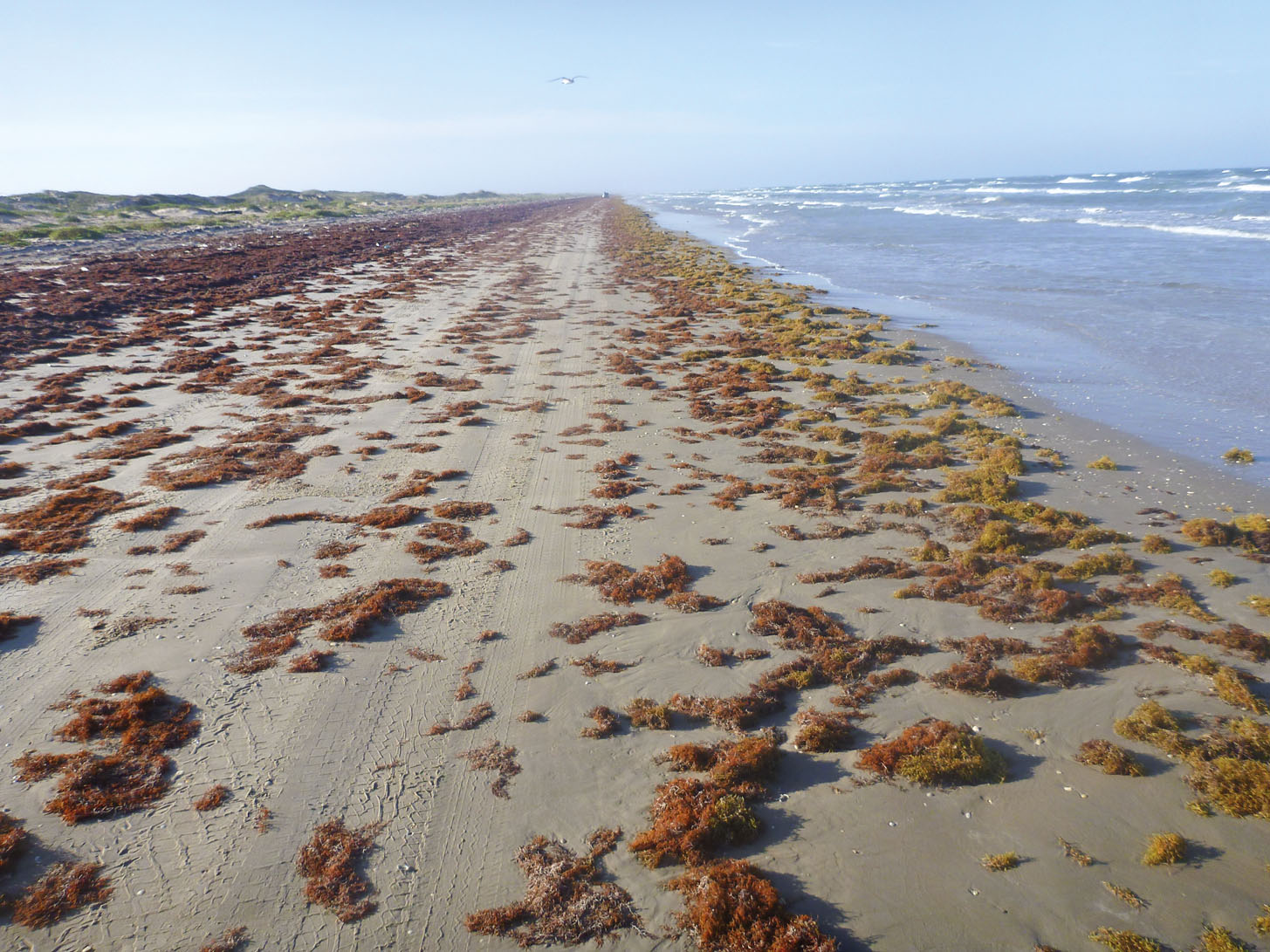 Sadly, much of this past summer season included an “unfishable” amount of sargassum hitting the PINS beach. Here’s to hoping for a better October.
By the time these words reach your door we'll be smack dab in the middle of the best catching of the year on PINS; barring tropical weather issues. It will be a most welcome change because overall the catching has been extremely poor this summer. Poor conditions have ruled the day. One negative aspect will cease and within 48 hours it has been replaced by an entirely different problem. The summers of 2012 and 2011 were relatively poor years in the PINS surf as well compared to average years.

As many of you already know I am extremely plain-spoken and honest and I require personal and professional integrity as a cornerstone in my life. I found myself canceling and rescheduling more and more trips due to cold water upwellings, high velocity winds and heavy seas and long-lasting impacts of large amounts of sargassum and other times when the surf was a "no life" zone. All at once I couldn't get by financially any more. A bay guide can make for a calm shoreline during extended periods of high winds but a surf fisherman has to stand there and try to cast directly into it. And the longshore drift or littoral current as it is known; prohibits keeping lures or habits out for more than a few seconds before they are washed down the beach.

Personally, I totally believe in global warming but I know some of you don't so how 'bout we call a truce and agree that we are currently living in a time of accelerated climatic change. I don't want to get into a debate about it. I just know its happening and it's been occurring for some time. As an avid lifelong outdoorsman I see fully the changes in behaviors and habits of wildlife and fishes due to these changes, and I will have to stay open-minded to new ideas and tactics and get used to getting a smaller piece of the pie that is the bounty of the great outdoors, as patterns change.

What can you possibly do about it; you might ask? There is only one thing you can do and that is to become a better fisherman. We have fewer days with quality conditions for surf fishing every year. Those precious windows of opportunity get smaller and smaller and father apart all the time. If you ask my wife what she thinks of the surf she'll look you dead in the eye and say, "When the surf gets right you've got to stop what you are doing and get down there if you want some of it. It waits on no man and on nothing. It doesn't wait on jobs, anniversaries or birthdays." I wonder where she learned that.

Folks have asked me for four decades and more; "What is the best time to go surf fishing?" I always answer, "The opening day of dove season," and then bust out laughing because I love wingshooting doves and grew up doing it. Too bad we can't be two places at the same time.

So here is the way I see it. If you want to be consistently successful fishing the surf you have to prioritize. And, when it's time to go you gotta' go, and don't spend the entire day jumping skipjacks if your goal is to catch a tarpon. Use your available time wisely.

And another thing; don't waste that once-a-year three day kitchen pass camping with a bunch of drunks who are more interested in catching a buzz than fishing. I'll do my partying at the house with my wife and some friends but when I hit that beach I am 100% fixated predator. Of course not having consumed an alcoholic beverage in twenty-two years helps with that. BUT SERIOUSLY If you are a serious fisherman, don't hang with a bunch of heavy drinkers. That road is not going to take you anywhere you want to go.

OK Now for some tips. Quite often the sargassum makes the surf unfishable until you get 40 or even 50 miles down-island. I tell everyone, "You got to go to know." So, I typically drive all the way to the Mansfield jetty taking note of everything along the way and then we fish our way back to town. This gives me the opportunity to know where the best holes, bait and food chain activity are concentrated. For the newcomers, the sun is actually south of us in the northern hemisphere and driving north with that sun at your back is just about perfect; especially for spotting shallow feeding redfish and sightcasting to them. And many of the reds are so shallow their backs are out of the water.

I mentioned the full moon in a previous segment. On average, I'd say that ten months out of a year it kills the fishing for at least five days.

If you happen to see a seven or eight foot bull shark cruising half out of the water and stop there to fish for any other species, you're wasting your time for they aren't there. You can, of course, sightcast to the bull with a slab of skipjack or whiting. Cast the bait at least thirty feet up-current from him or he'll surely spook.

For the one-hundred-fifty-first time Don't Slam Your Truck Doors!

If it's been poor catching for a while and we get a really conducive weather forecast for the weekend, blow off the fact all those other people are going to be there and go fishing anyway. 'Tis much better to fish when there are lots of people and fish than when there are no people or fish.

You know that mesh liner that comes in wading shorts? If you are getting an uncomfortable rash from it take a pair of scissors and cut it out of the shorts. Treat the chaffed area with Gold Bond Body Powder. An appropriate tip here is that you might want to put some undergarment under your shorts or they can be real showy. I wear swim trunks under my shorts.

Surf redfish prefer a late-afternoon incoming tide. You can be fishless at 3:00PM and catch twenty reds by 5:00Pm.

Now for my personal favorite; the "tourism bureau" weather report. It works like this. Early in the week they'll say it's going to blow a gale from Friday evening through Sunday and mariners should take warning. Then later in the week they will scale down the wind forecast for the weekend because they want that Hill Country money. Come Friday morning after everyone has already made solid plans to come to the beach, they revise the forecast back to gale warnings. This has been common all my life.
If you have not taken time to visit www.FriendsofPadre.Inc. please do. We've done lots of work on it and are putting honest weekly reports on water and weed abundance, fishing, bird data and driving conditions. Every word of it is gospel 'cause we will not put anything on there that isn't. We depend on your financial support so you know what to expect on the upcoming weekends. They can save you a lot of prepping, driving and gas money for nothing.

Just in case our editor forgets to remove my phone number from this magazine or by chance you have it in your files; it's been disconnected. Now that I am no longer guiding you have no idea how wonderful it is NOT to get 30-40 phone calls per day. Life is a hoot. Make sure you make time to get you some of it.

If we don't leave any there won't be any. ~Billy Sandifer