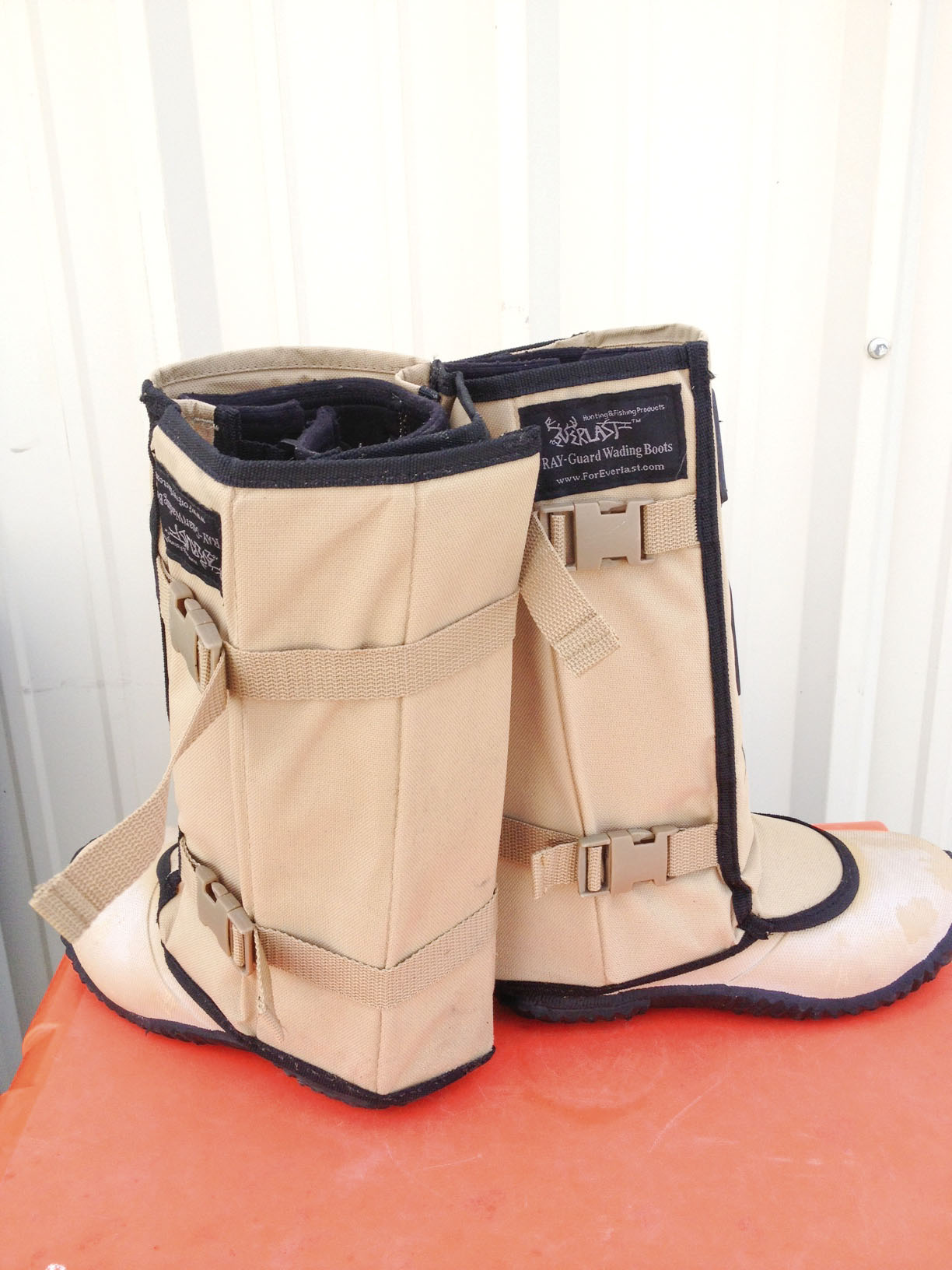 Unwilling to learn the hard way whether my historic good luck with stingray wounds might have run out; full protection boots with leg guards are now part of my surf wading gear.
For 40-odd years I stomped around barefoot in the surf and bays like a stormtrooper totally ignoring stingrays, broken beer bottles, and innumerable other unforeseen harmful entities and remained unscathed. Oh, I encountered plenty of stingrays. It was common for me to feel their slick backs and wings slide out from under my feet as I touched them most days, and on many occasions several encounters during the same day. BUT I NEVER GOT HIT BY ONE. Then everyone began to endorse sliding your feet to avoid being struck by a stingray and I began to slide my feet as suggested. I got hit twice in three years plus one in the thumb.

Years ago a fella remarked, "Billy, you are good and I am lucky. I'd rather be lucky than good any day." So in my case I guess being very lucky sure paid off better for me with the stingrays than following accepted guidelines did.
I have a hunch about this situation. In his ecosystem a ray is not an apex predator. In their world filled with sharks, they are dinner. From watching underwater footage on TV, a shark doesn't sneak up on a ray, he hits him like a linebacker. Thusly something approaching a stingray boldly would naturally frighten him and he moves on while something approaching him subtly might cause him to stand his ground and could lead to a wade fisherman getting stuck.

Each time I got hit it was early in the morning on a charter and I went on and worked the rest of the day and never once went to see a doctor. I did everything wrong and only suffered minor scars and a bit of nerve damage. From my understanding Mike McBride reacted in a much more appropriate manner when he got hit, seeking medical attention, yet he had serious problems requiring surgery and a lengthy recuperation.

There's no guarantee on being or remaining lucky so immediate and proper medical attention is definitely going to be in order if I'm ever stuck again. I'm going to do a lot of trout fishing in waist deep guts this summer and am going to invest in full boots/leggings for stingrays so I can concentrate on doing a good job of fishing instead of worrying. A word to the wise here the wade gut is made up of a series of potholes that are the result of perpendicular channels cut through the sandbar. These form where the sandbars have been cut deeply to allow water movement to and from the wade gut, back toward the second gut. The deepest part of the gut will be directly in front of such a rip. The water will be flowing directly offshore at these locations and it is commonplace to see two or three large stingrays laying on the bottom of these potholes waiting for crabs and other morsels to be swept to them.

I have always honestly felt that the dangers of sharks were too self-explanatory to have to address it, but sure enough someone will convince me otherwise from time to time. Take the fly fisherman who tells me he watched a bull shark of six-plus feet swim directly up to him and head-butt him off his feet asking whether he should have been more concerned. And then there was the customer who asked, "How close should I let the sharks come Billy." Of course I replied something on the order of, "not too close." And then suddenly he blurted, "Is four feet too close?" Or the kind man standing next to me on the outside bar who sounded concerned and asked, "Billy, should Joe be letting those two big bull sharks swim down the wade gut between him and the beach?"

Trust me when I say these are all true and each and every one a genuine hoot, but each time I remember these occurrences I realize how the outcome could have been entirely different and a genuine tragedy without the good luck we were enjoying. So, the answer is simple: At the first sign of a shark in the water, regardless of how far away it is - EVERYBODY GET OUT OF THE POOL! He's already ran all the good fish off anyway.

There are many species of fish that frequent the hundreds of miles of the Texas surf and the surest way I know of getting disappointed is to have unrealistic expectations of immediate large catches of just your one or two preferred target species. It's simple enough; what you are going to catch is whatever species is present and biting, and there are many days when you'll catch numerous unwanted species for each target fish caught. The newcomer must ask himself some very real questions about his long term goals and when you're starting out is the time to ask. Is your surf fishing to be a family pursuit complete with overnight camping or serious grinding it out along miles of beachfront for that fish of your dreams? Camping and fishing in one location will lead to fewer quality fish caught but with family groups it's often a necessary evil. If the entire family is just starting out surf fishing the family camp scenario is often perfect as they have the opportunity to learn together to diversify and increase their skill levels.

To me it's real simple. Fishin' is supposed to be fun and if it ain't fun it ain't fishin' and you need to revise your game plan. Start with small species and tackle and work your way up the food chain. One of the first things one has to do is STOP LOOKING AND START SEEING. Small baitfish scurrying at the water's edge tells the observant angler that predator fish are in close and have ran them shallow in self-defense. Large beds of coquina claims visible at the water's edge indicates high potential for whiting, redfish, black drum and other bottom feeders being in the immediate area. There are few times when there is more laughter than when we stop to catch dancing skipjacks on light tackle and speck rigs. In addition to being a lot of fun to catch, the skipjacks likewise provide an excellent teaching tool on how to fight fish on light gear. Bending down the barbs on your hooks will greatly improve the skipjack's survival rate. Moving up to medium-sized species the jack crevalle fills in this gap. Averaging around twenty-two pounds they can be sightcasted with lures or flies and are as game a fish as one could ever hope to encounter.

When starting out trying your hand at surf fishing, keep both your camping and fishing gear at a minimum. Stick with the basics. As I've always said, "What works best on the beach is the fewest moving parts possible." I have no idea how many artificial lures I own. I do know that I could probably pick six on any given day and end up landing everything caught that day on just those. The remaining thousands I have only hit the water one day per decade. Trick is figuring out which of those thousands they'll hit on a given day during that decade. I'm horrible about trying thirty-plus lures a day; determined to find that magic lure they'll hit, while I know good and well I'd do better to stick with a handful of tried and true producers and fishing them well.

I strongly recommend having only two rod and reel outfits per person to start out with. One light tackle spinning rig for throwing lures and small weights, and also a medium-sized rig filled with 30 pound test on a longer rod to throw heavier lures and bottom leaders. Buy pullover reel covers and use them religiously. If you have a vehicle rod rack, use bungee cords to hold the rods and reels in place. If you don't have a vehicle rod rack, wrap towels around the reels and where the rods hit your truck's bed and wrap copper wire around them so they don't bounce off each other. If the rods are bouncing off each other you will lose guide inserts regularly. Leaning rod and reels up against the truck will result in them being blown or falling over and you'll end up with a reel full of sand. If reels are dunked under water or dropped in the sand, they should be rinsed immediately with fresh water.

Next month we are going to have a look at prepping a vehicle for beach travel and the necessary items you should carry.