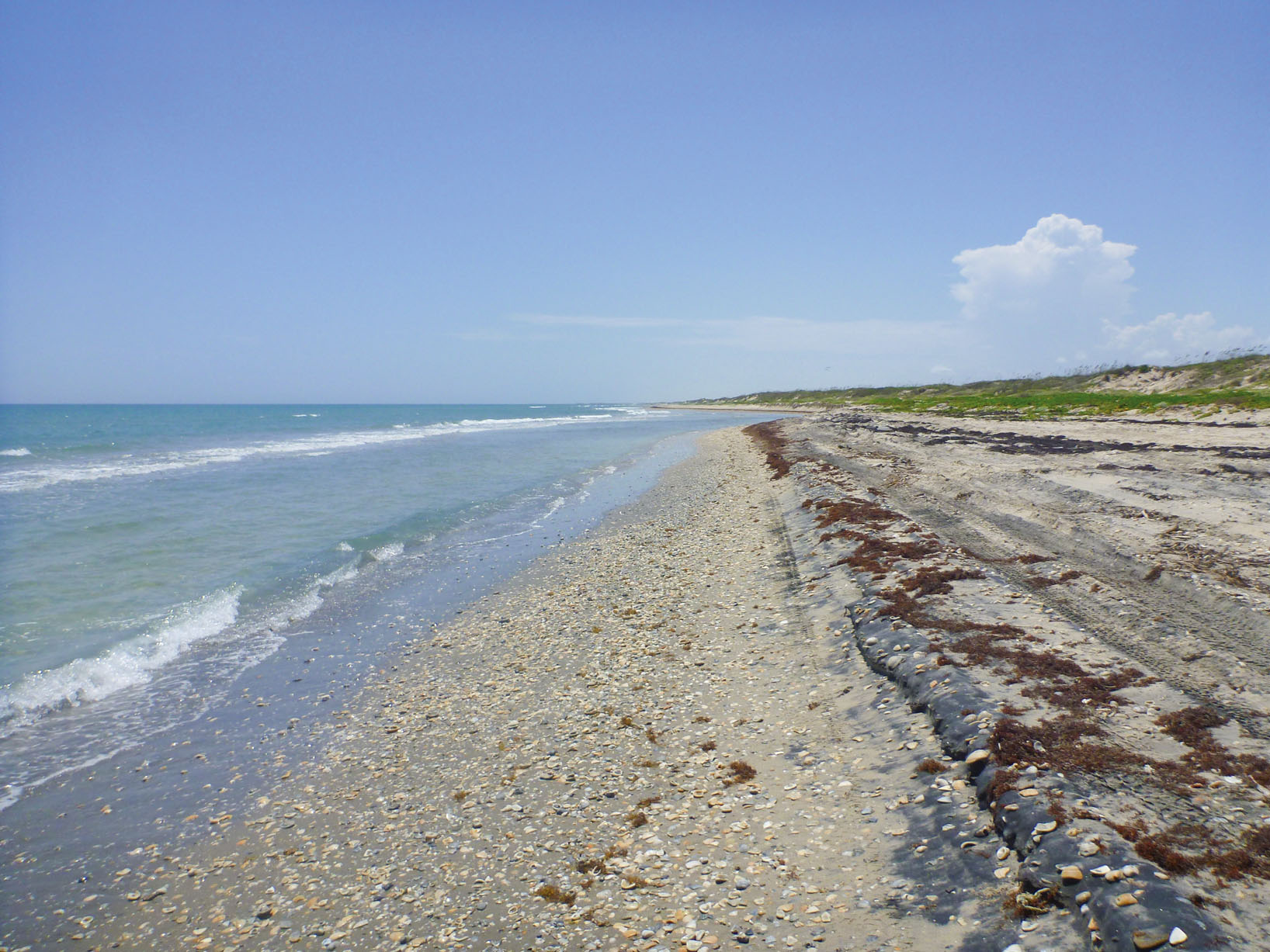 : Quite unusual! A huge washout has developed at the 58-Mile beach of the Padre Island National Seashore—the surf is lapping right at the base of the dunes.
For a number of months I've been attempting to give you a How-To Series, a primer of sorts, on fishing the surf. I have not been able to do a very thorough job of this as there are simply too many ways to fish the surf and way too many tricks to get them all in a short series of articles. Hopefully though, you've at least learned some of the basics. Every time I get on a particular topic and write up one tip, two more pop into my head. So what I'm going to do in this final segment is list a bunch of topics/tips, not all related to each other, but all are related and therefore valuable to surf fishing in one way or another.

Mono top-shot – Always use a top-shot of monofilament when fishing with braided line. This top-shot should be equal to the length of the rod from tip to reel seat and have several revolutions of mono wrapped on the reel itself. If you use a shorter top-shot, or leader if you prefer to call it, the braid chafing at the rod tip will cause it become frayed and weakened while your outfit is sitting in the rod rack traveling the beach. Monofilament through the rod tip will not give you this problem.

Leapfrog – Never stop directly in a group of anglers catching fish. Be courteous and move at least 50 yards up the beach. These fish are moving parallel with the shoreline and by jumping 50 yards ahead you will give your anglers a chance to get their gear ready and get in position. Several groups of anglers can "leapfrog" the same school of fish by doing this and never interfere with each other.

Where are you fishing? – Always keep your line directly out in front of you. That's the only way for other anglers to know where your line/fish are. If lines are allowed to cross one over another they'll cut each other's fish off time and again. We successfully fight and land three or more big jack crevalle at once simply by keeping even with our lines.

Littering with fish – Return all fish you aren't going to eat to the sea. For one thing, it's against the law to do otherwise, but my main reason is a hardhead fin makes for a very tricky flat tire. It breaks off in the tire but only goes flat when you park directly on it. So you keep having one flat behind another and the repairman can't find anything until you figure it out and search every inch of that tire. Yes sir; the hardhead fin is a gift that keeps on giving.

Structure – The windswept Texas surf doesn't support coral as many places do around the world and there are very few "hard" structures such as boat wrecks, so we are without static structure and it is absolutely imperative that the surf fishermen learn to "read" the waves that mark shallow bars, drop offs, channels and pockets if he is ever going to be successful at locating prime fish habitat. Never look directly offshore to read habitat. Instead, look at the rows of waves located at 10 or 2 o'clock to your position. Breaks in the waves mark eddies, calm pools and shallow bars and will become visible patterns which will make the surf totally readable. Target one type of structure for a bit and if it doesn't pay off turn your attention to different features. On a given day the majority of fish will all be on the same type of structure and sometimes it may be the exact opposite type locations from one day to the next.

Rods at the ready – When traveling the beach always have a set of rod and reels prepped and ready for immediate use. This goes for all sizes of tackle; light, medium and heavy. To not do so could at some point cost you the fish of your dreams.

Don't overdo it – Resist the urge to pack more tackle than you can use. It usually cripples rather than assists you.

First lure of the day – I have always believed in starting with the lure that worked yesterday. Many times the mood and preference of the fish will have changed but more often I have found it will still be a good producer.

Get the point – Dull hooks probably result in losing more fish after hooking than any other reason. Check and replace hooks regularly. When replacing hooks on lures, match the originals as closely as possiblein terms of weight. Using hooks that are too heavy will likely alter the action of the lure and it may not run correctly. This is especially the case with topwater lures. When you purchase replacement hooks, always insure they are sharp from the box. There are many elaborate and expensive hooks that are surprisingly dull from the factory. I figure if the company can't sharpen them then I can't either. If I can bend hooks between my fingers I feel a fish will bend them as well. There's lots of ways to save a little money and purchasing poor quality hooks is not one of them.

Take it to the sand – Never attempt to unhook a green, flopping fish when wading the surf. You are just as apt to get hooked as it is to get unhooked. Drag the fish up on wet sand and remove the hooks there.

Planning for success – The most successful trip is going to be the one where you are targeting the fish species that are present at the time. You can fish for anything you want but you are going to catch what is there and biting. Knowing in advance which species are in good supply allows you to insure you have the correct equipment prepped for the trip or that you may need to delay your trip as your target species is not present at the time. Don't try to do it all at once. Plan trips as carefully as possible to maximize your chances of success.

Timing your trips – Avoid full moons and high-traffic/visitor usage weekends. Heavy traffic and large crowds will usually cause fish to "lockjaw" and full moon makes for poor catching, even with the best of conditions.

Stick to your guns – When you find a lure the fish are taking on a given day, stick with that lure and grind it out. One fish on a particular lure (size, color, etc.) might be a fluke, but two or certainly three, never are. Concentrate your full efforts on that lure.

Know when to leave – If you are fishing light tackle and a shark shows up, load your gear and move, because the fish just did.

The "right" signs – In general, birds feeding in the surf zone are one of the most positive signs anglers can utilize for locating feeding game fish. However, I have never done well when fishing under flocks of cormorants. I have long believed it was the intrusive manner in which these birds feed that scares off medium-sized game fish.

Weed 'em out – If a moderate amount of fresh sargassum is washing up on the beach it is going to be difficult to fish. If large amounts are present, fishing becomes virtually impossible.

Throw in the towel – Over a bird's head-that is. If any bird becomes tangled in your line, get a towel over its head as soon as possible and it will lay still and let you remove the line.

Take care with baited hooks – This happens way too frequently; anglers retiring for the night and leaving rods leaning on vehicles or tents with baited hooks. Coyotes and raccoons are frequent visitors to beach camps, even with campers present through the night. They'll grab that bait in a heartbeat and what happens next is never good.

Know when not to go – Seas of four feet and greater are too big for quality fishing; periods during six foot seas are unsuitable to driving on the beach.

"If we don't leave any there won't be any." Billy Sandifer