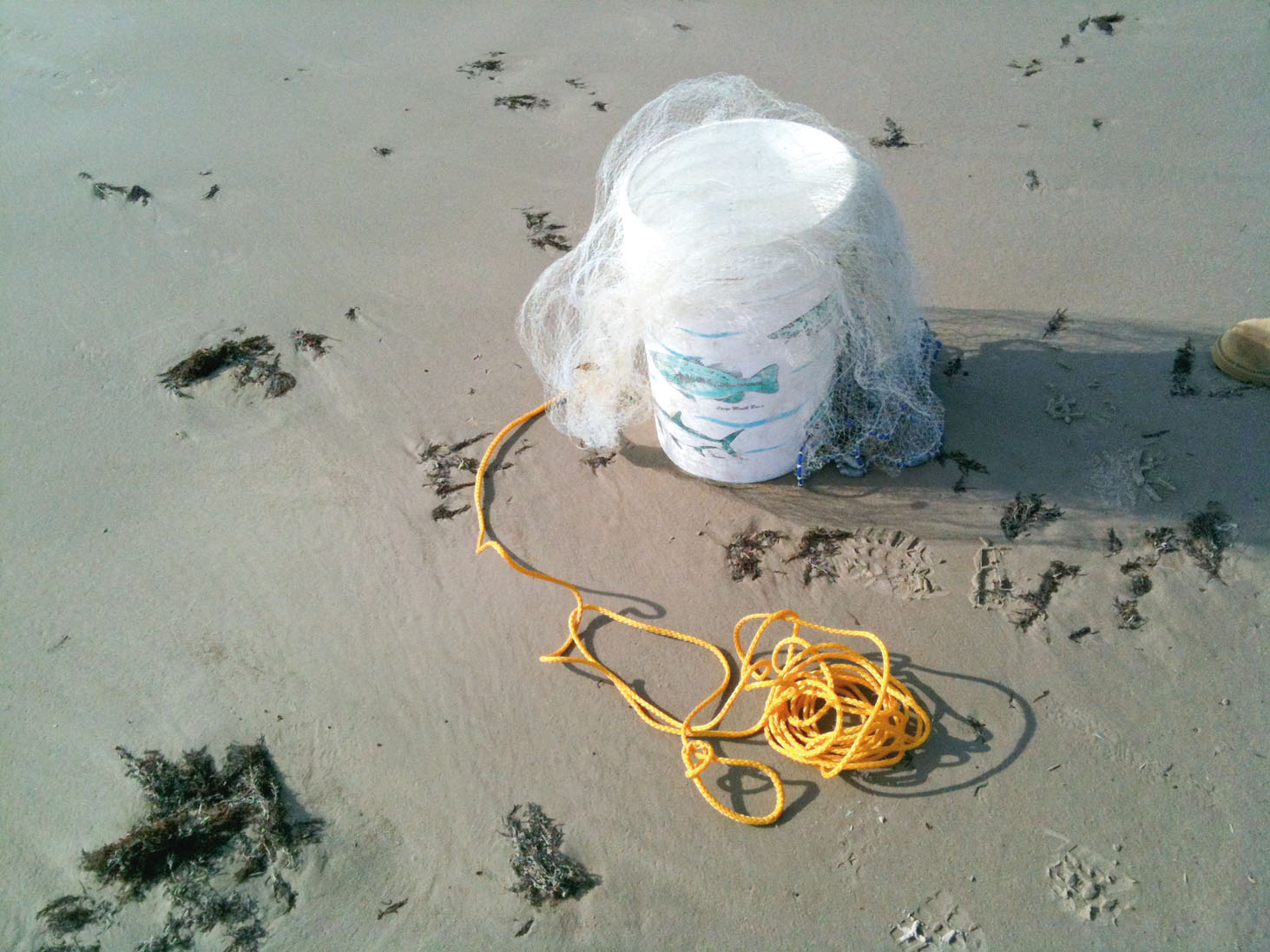 When the driving conditions are poor I prefer to catch bait on-the-spot as needed – castnet draped over bucket prevents bait escaping.
I have long referred to September, October and November as the Time of the Frenzies; when tons of dusky and bay anchovies and spot menhaden move in and out of the surf, and the annual finger mullet migration from Texas bays to the surf takes place.

It has always occurred to me that the irony of this time of year is that it is impossible to take part in everything available in a single day. The angler has to prioritize his target species and techniques for pursuing them in advance or risk becoming totally overwhelmed by all the options available.

This is also the peak of hurricane season and you can have everything planned out and the appropriate tackle ready, and then conditions change dramatically overnight, and your plans and target species are no longer available. It's one of the tough faces of surf fishing that longtime anglers never really get used to; they simply learn to live with it.
For decades my beach charter customers would ask which species we would likely encounter and my standard answer is still the same; "Probably just about anythingexcept perhaps the one you'd like to catch more than anything else."

The key to success is to have a variety of tackle rigged for a variety of species, fully prepped and ready in the beach truck's rod holders and a fully-intact sense of humor because you'll need that too.

It's commonplace to head down the beach on a redfish charter and end up fishing amid plentiful tarpon, jack crevalle, sharks and skipjacks. You'll most likely be able to catch some redfish as well, but unless you have the appropriate tackle available you'll be overpowered by the other species. But the bright side is that you will surely have more days to catch redfish in your lifetime than tarpon. So, the better prepared for a variety of species you are, the greater the chances of having a really fun trip.

During this time of year I have quite a list of backup plans in mind and during the day we work our way through it as might be necessary. Obviously if tarpon are readily available we'll try to target them throughout the day, although typically we will catch other species as well. And though it's hard for me to comprehend, there are customers who want to catch reds regardless of what else is available.

Most beach anglers carry their ice chest-live well setups in the rack on the front of their beach vehicle and this is a lot of unnecessary weight on the front suspension, ditto huge tackle boxes. When you consider 10 gallons of water at a minimum and a large quantity of bait strapped that far forward with 100 or more pounds of tackle alongside, you will begin to understand why I do not commonly use my bait tank when I'm fishing north of the 30-mile beach; unless the action is really on. If we stop to bait fish I'll just cast net finger mullet and keep them in a bucket draping the cast net over the open top. The reason is that the Big Shell beach is typically very rough driving and all that weight hanging over the front bumper increases the probability of tearing something up. South of the 30-mile the driving is usually easier, so when bait fishing I will catch the bait and use the ice chest-live well. Most of the time we will be using lures but having extra leaders and a variety of sinkers in 1, 2 and 3 ounce size readily available is certainly useful anytime you decide to switch quickly to bottom fishing with bait.

If you want to play with the skipjacks, go buy some Speck Rigs and some 30-pound test Hard Mason leader material. Cut the Speck Rigs off the 25-pound test mono they come on and retie them on the 30-pound Hard Mason. I've found that one out of three skipjacks will cut you off on the 25-pond mono but the Mason will last much longer.

Never throw your Speck Rigs directly into the boiling middle of a feeding frenzy. Your line will catch in other fish's gills and you'll get cut off on every cast. Cast to the edges of the school. Typically large numbers of skipjacks are feeding with the tarpon on dusky anchovies but the tarpon are feeding on the skipjacks as well. A skipjack or a big piece of skipjack on a circle hook will usually get nailed in a feeding frenzy pretty quick, but you never know if it will be a tarpon, blacktipped or bull shark.

WHEN FISHING THE FRENZIES ALWAYS ASSUME LARGE SHARKS ARE PRESENT 100% OF THE TIME WHETHER YOU CAN SEE THEM OR NOT!

I use a seven-foot length of nylon coated cable or 100 to 200-pound test fluorocarbon leaders for tarpon. As we travel south I use binoculars to inspect every large group of fish and birds working offshore to ascertain whether tarpon or jack crevalle are among them, or just skipjacks and mackerel. I make mental note of their locations because very often these same fish will be working the water's edge in the same location in mid-to-late afternoon.

Be constantly alert for oval-shaped copperish-colored patches of water just outside the first bar. It is relatively common for 30 to 500 redfish to come out of the bay channels and make their way for miles in this manner. It is an absolute hoot because you can drive ahead of them on the beach, wade out to the bar, and be waiting for them to come by and sightcast to them. They will hit just about anything but a 3/4 ounce spoon is probably your best choice of lures. After everyone catches or loses their fish you can drive up the beach a half mile or so and do it all over and over again. I think I had two customers land 39 reds on a charter doing this one day, and we followed them 11 miles. Usually these redfish have been schooled up in the channel waiting for a signal it's time to move into the Gulf. A squall or a change in wind direction sets them off and they enter the surf.

ANOTHER NOTE OF CAUTION: AMID THE EXCITEMENT - YOU'VE GOT TO STAY REAL STINGRAY CONSCIOUS RUNNING OUT TO THAT BAR OVER AND OVER. NO REDFISH IS WORTH A STINGRAY HIT!

Now, before everyone sells out and moves to Corpus, it's obviously NOT like this all the time. The prevailing weather pattern has a whole lot to do with it, and when we are trapped in a particularly poor weather pattern for several days, fishing will become less productive. High winds and large seas that accompany cold-frontal passage will halt quality fishing short term, but it will be all the better the second day behind the passage as conditions moderate.

We do more sight casting at this time of year than all the remaining months. We are spotting these fish while we're driving along the beach so it's important to keep our speeds down and NOT TO SLAM TRUCK DOORS. Follow the birds and the bait to find fish. If finger mullet are in scattered schools, fish in the area they are congregated in. If you find a hole or a short running wade gut that is full of finger mullet holding up resting, the reds are there as well. If large schools of anchovies are holding in one particular area I am going to concentrate my efforts in that area even if nothing is going on right then, for I know this is the place it will happen when the bite turns on.