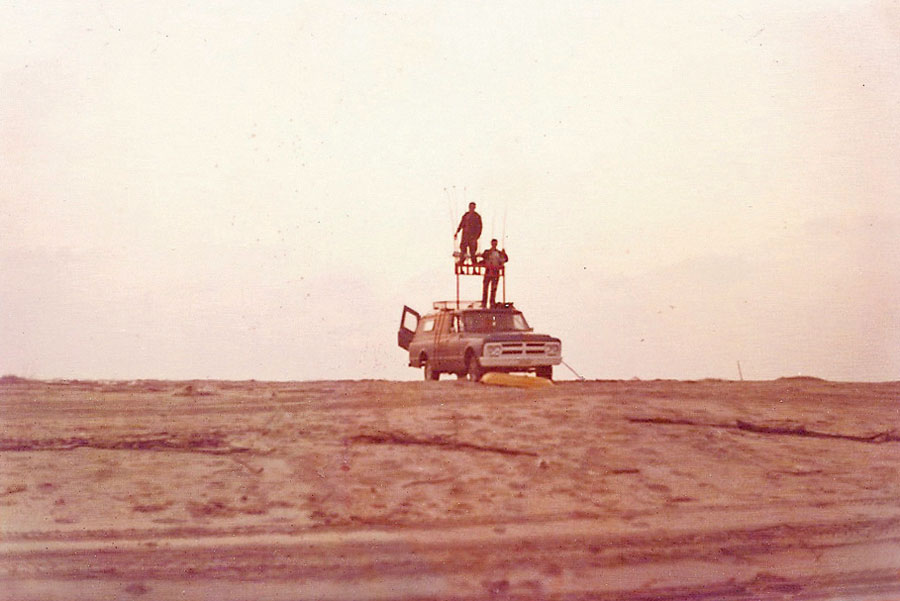 When things change slowly over time it is easy to forget how they once were. This photo was made at Big Shell, sometime before 1980. Notice the height of the beach and the steep decline toward the surf zone. (Dale Whitehill photo)
I'm going to cover Spanish mackerel and skipjacks (Ladyfish) at the same time due to their similarities in behaviors and special problems they present to anglers.
Both of these species are typically encountered in large schools, both feed on small shoaling baitfish such as anchovies on and near the surface of the water, and both are known to cut off lots of tackle. The mackerel do it with their razor sharp teeth and are a special threat to shiny swivels. The skipjacks cut lines with their gill rakers when they jumpwhich is usually often.

Often skipjacks are boiling the water in feeding frenzies and if the fisherman throws into the middle of it he is instantly going to be cut off. It's not by a fish that has taken his lure but by the gills of other fish that become tangled in the line. Obviously the solution is to avoid casting directly into or over the frenzy and instead to cast to the edges of the action. Once hooked up you can then work your fish away from the school.

Both species are spring, summer and fall residents and very often are shadowed by sharks so be alert. Any small and fast moving lure will work for both species with my favorite lures being Speck Rigs and small silver spoons. This being the case, light spinning tackle often excels due to its ability to cast very lightweight lures.

Mackerel will free jump and swirl on the surface of the water while skipjacks will make the water absolutely boil, which aids in targeting them. Likewise; fish-eating seabirds are normally circling above all that feeding action. Mackerel really like the lure moving fast and their lightning fast runs on light tackle are a pure adrenalin rush.

A light gauge single-strand wire leader is recommended for both skipjacks and mackerel but the truth is that at times they simply will not hit a presentation on a wire leader. When this happens you have to go with mono leaders and suffer the loss.

There is one option that is extremely helpful and that is to purchase some Hard Mason monofilament leader material. It's extremely abrasion resistant30-pound test Mason will do the job of 50-pound test fluorocarbon. It is inexpensive, but very stiff, and getting a good knot to hold in it can prove difficult and often you'd be better off crimping your lure to the leader. Now the normal Speck Rigs you find in stores will be built of fairly soft mono of about 25-pound strength. If you will cut away that soft mono and retie the rig with 30-pound Hard Mason you'll be way ahead of the game.

The largest Spanish mackerel of the year are present during the finger mullet migration in October and November and they will hit larger lures at that time as they are accustomed to taking finger-sized mullet.
Skipjacks are not edible but Spanish mackerel are. They are a very bloody-meated fish though, and if they are kept for food it is recommended that they are bled while still alive and put on ice immediately to preserve the flavor.

Another similarity of these two species is that both have very fine scales and, if you have ever handled one, you no doubt noticed your palms covered with them. Scales are a protective layer and when removed the fish is subject to infection. One of the best devices to come on the market in years is the fish grippers which allow the angler to hold the fish by the lip without ever laying a hand on itperfect for catch and release. It can be unhooked and photographed without any damage to its scales and protective slime. While some grippers, notably the Boga Grip, have a built-in scale and a high-end price tag, others without weighing capability are available for a fraction of the price. When we do something to protect fish we are also doing our part to insure these species will remain abundant for our children and grandchildren to enjoy. Beware of a diet that includes lots of mackerel; TPWD says their flesh contains exceptional mercury content, as do so many fish species.

Let's move on to speckled trout. Trout season in the Padre surf runs from May through August. There are probably some trout in the surf zone most if not all of the year but not in numbers that justify fishing for them specifically. In the spring they prefer silver spoons and blue-backed chrome Rat-L-Traps. Amid the sargassum and strong winds and currents of spring one would do well to include 3/4 ounce Johnson weedless spoons in his box. Any amount of sargassum will take the Rat-L-Trap out of the picture.

As summer warms the surf zone our topwater action will take hold. There are always exceptions but typically summertime surf trout will hit either topwater or plastic on any given daybut usually not both. One interesting thing about the surf is that surf trout typically want just one color lure on any given day. It may change daily for days in a row or they may prefer a certain lure for several days but color is of major importance. The same color lure will account for almost every trout you catch on any given day. This is one time when having a number of anglers may actually be an asset as a number of anglers can work through a large number of selections much quicker than one or two working alone. Observing the color other beach fisherman are throwing may be a shortcut to finding the preferred lure color for that day.

On calm clear-water days I like to scale down on lure size. Smaller lures also seem to work better in the heat of midday. Floating MirrOlures of the 7M variety were the only topwaters we had in my youth and they'll still catch many a finicky trout, though I doubt there are many in tackle boxes other than mine. DOA shrimp and small plastic minnow-imitating plastics may well produce trout when all else fails. Here again, the spinning reel may be called for in order to get some distance with a very lightweight lure.

Plastics fished under an Alameda Rattling Cork may be deadly in the surf although it seems almost nobody tries them to find this out. I have small stashes of other very productive lures in my bag of tricks but it would do no good to tell you about them as they are no longer made. I very often wonder why someone doesn't manufacture many of the old and very productive lures which have patents that have long expired.

We often hear of how shallow trout will come in the bay systems but we never hear much about it in the surf. In reality, I have seen large trout lying in shallow surf pockets with their backs exposed. That is why I am always telling customers to never cut their retrieves short but to continue them right to the end of the rod as a good number of very good strikes occur immediately at the water's edge. That's also why I always tell them to never slam their truck doors. Trout can be present anywhere in the surf zone and it's up to the angler to locate them on a given day. The upside of this is that when you find one all the rest will be residing in like places for the day and you can really have a productive day. We'll talk more on the trout next time. Gives me fishing fever to think about them this much. What a Hoot!

If we don't leave any there won't be any. -Billy