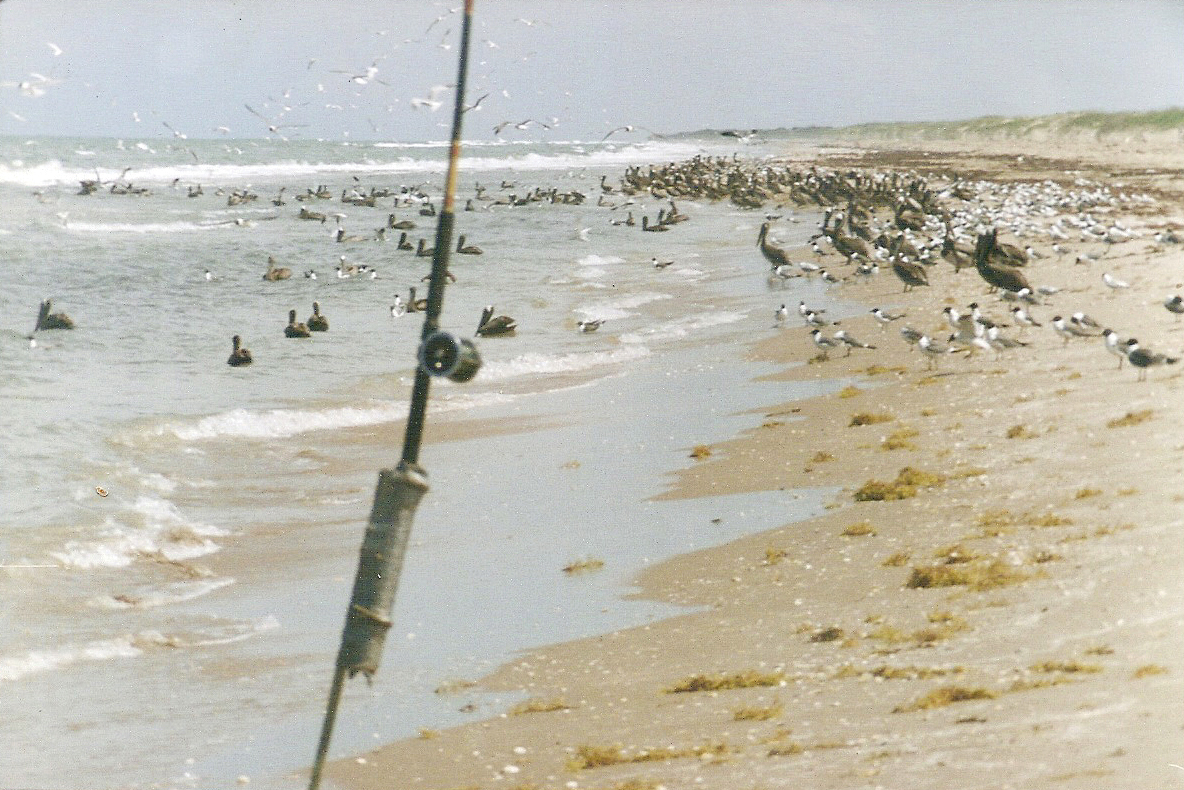 This huge collection of birds has got to marking a large school of fish.
In several recent articles I have been providing information and advice for various species of gamefish available to surf anglers. This month I will focus on tarpon, as to me there is nothing that equals the excitement of hanging onto my rod and reel while an adult tarpon throws its chrome body to and fro across the surface of the sea in an attempt to rid itself of my hook.

The brute strength that large surf-run tarpon exhibit is genuinely breathtaking and puts them in a class all by themselves. While the jetties produce more tarpon than the beach, this is a harsh environment and fighting a fish there can be as hard on the fish as the angler. It's nearly impossible to get a successful release without the tarpon getting badly beaten up by the rocks. And there is something primeval and correct about doing battle with one on appropriate tackle while standing knee deep in the surf.

There were numerous reasons for the tarpon's decline. Heavy commercial fishing pressure in Mexico where they were turned into pet food and fertilizer in huge numbers was one of the biggest. Also in that era, Texas rivers were dammed to capture water for human needs and this greatly inhibited the flow of fresh water that traditionally came to the bays and gulf. Tarpon love "sweet" (brackish) water and with increasingly less fresh water coming to the coast they spent less time in our area during their annual migrations.

Our tarpon are actually Mexican tarpon; there is no substantial resident Texas population. They migrate northward from Mexico toward the area of the Mississippi River delta during summer, and then return to more tropical Mexico waters in the late summer and fall. We may encounter tarpon any time after mid-May but typically these are only an occasional stray-hooked specimen while fishing for other species. This is interesting to me as June used to be the month for tarpon in large numbers off the PINS beach and now September is the time of peak abundance.

A heavy hitter in this game is large schools of anchovies which also travel along our shoreline headed south. The densely packed schools of these small fish (1.5- 2.0 inches length) contain untold numbers of individuals and they are a favorite forage species of the tarpon. Large shoals of ladyfish (skipjacks) feed on the anchovies and both these species are fed upon by the tarpon, while bull and blacktipped sharks feed on all of them.

The tarpon will free-jump and turn broadside in the air and then fall upon thousands of the anchovies. The anchovies struck by the tarpon are stunned and the tarpon turns around and siphons up all the stunned victims. We call it "the frenzies" and it is truly a sight to behold.

During the summer months, tarpon are often hooked by anglers fishing for trout or slot reds and the angler stands little chance of his tackle holding up to a tarpon of any size. Those targeting them should fish under birds or shoals of baitfish with a minimum of 30 to 50 lb test line and a six foot section of wire or fluorocarbon leader of at least 80 lb test. A live mullet of about 8 inches makes a perfect bait though butter perch (barred grunt), whisker minnows (Atlantic threadfin), small whiting or a small skipjack will do. Wide gap circle hooks are preferred.

A sliding sinker "fish-finder" type leader works well if fishing from a set position. In calm water we often use no sinker at all and the bait is monitored closely as it drifts with the current. There are times when we'll cast out a fish-finder rig and place it in a rod holder while throwing lures with a second outfit. The trick here is to have an empty rod holder alongside the fish-finder rod to provide a handy place to deposit the lure rig in if you get a fish on the baited one.

Due to the near constant presence of the voracious ladyfish, baits need to be kept on the large side; otherwise you'll end up hooked up to a large ladyfish all afternoon.
Tarpon are also fond of large chunks of fresh-cut ladyfish. Regardless of your choice of baits or lures you are apt to receive strikes from sharks of varying sizes. Using fluorocarbon leaders will allow the shark to cut you off rather than spool your reel but, having said this, there really is no magical cure for avoiding sharks when they are plentiful and feeding. In these conditions they will hit lures as fast as bait. I often use a combination of fluorocarbon and wire leader, two feet of wire on the hook end. This allows tarpon no chance to get a grip on the leader and use that grip to aid in throwing the hook.

Tarpon fishermen have long been advised to "bow to the king." This refers to pointing the rod at the fish each time it jumps so it doesn't land on a tight line and break it. But a tarpon doesn't just jump; it is a gyrating gymnast. Twisting and throwing its body into mid-air, it is actually the weight of the lure itself that causes the hook to tear loose as the fish thrashes and shakes its head violently. With this being the case, lures of lighter weight will definitely increase the angler's chances of the fish staying hooked.

One innovation to deal with this problem is what is known as the "coon pop" a clever rigging method credited to Capt. "Coon" Schouest of Houma, Louisiana. The coon pop consists of a lead-head jig with the hook clipped at the bend. A soft plastic tail or grub type lure is impaled on the remnant of the jig's hook and held in place with a small zip tie. Another small zip tie is then used to attach the jighead and plastic bait to the shank of the hook at the end of the leader. When a tarpon tries to shake the hook the zip tie breaks, allowing the jighead and plastic lure to fall away, thus leaving the tarpon with just the hook it is caught on. This can also be done with swimbaits and these too are quite effective.

One secret of tarpon fishing is that while lures that glow aren't particularly successful with many species; tarpon like them just fine. Just be sure to do an upgrade on your hooks as "out of the box" hooks probably aren't strong enough to stand up to a tarpon's crushing strike and hard runs.

Another successful technique tests the angler's patience. If early in the morning you drive up on a large school of tarpon working bait several hundred yards out you need to concentrate your efforts in that area. Don't hang around for a few minutes and then drive away thinking they're out of reach. Be patient and totally commit your efforts to this immediate area. The odds are way in your favor that those tarpon will push the bait up on the beach some time during the day. It's always amazed me how quickly shoals of anchovies and tarpon can move from a half mile offshore to the water's edge and you want to be there and ready when they do.

When you do succeed in landing a tarpon, get your photos made as quickly as possible and remove the hook ASAP and return the fish to the sea. They simply are too grand to kill carelessly and are protected by strict size regulations.

Life is a hoot. Get out and get you some!

If we don't leave any, there won't be any. Billy Sandifer