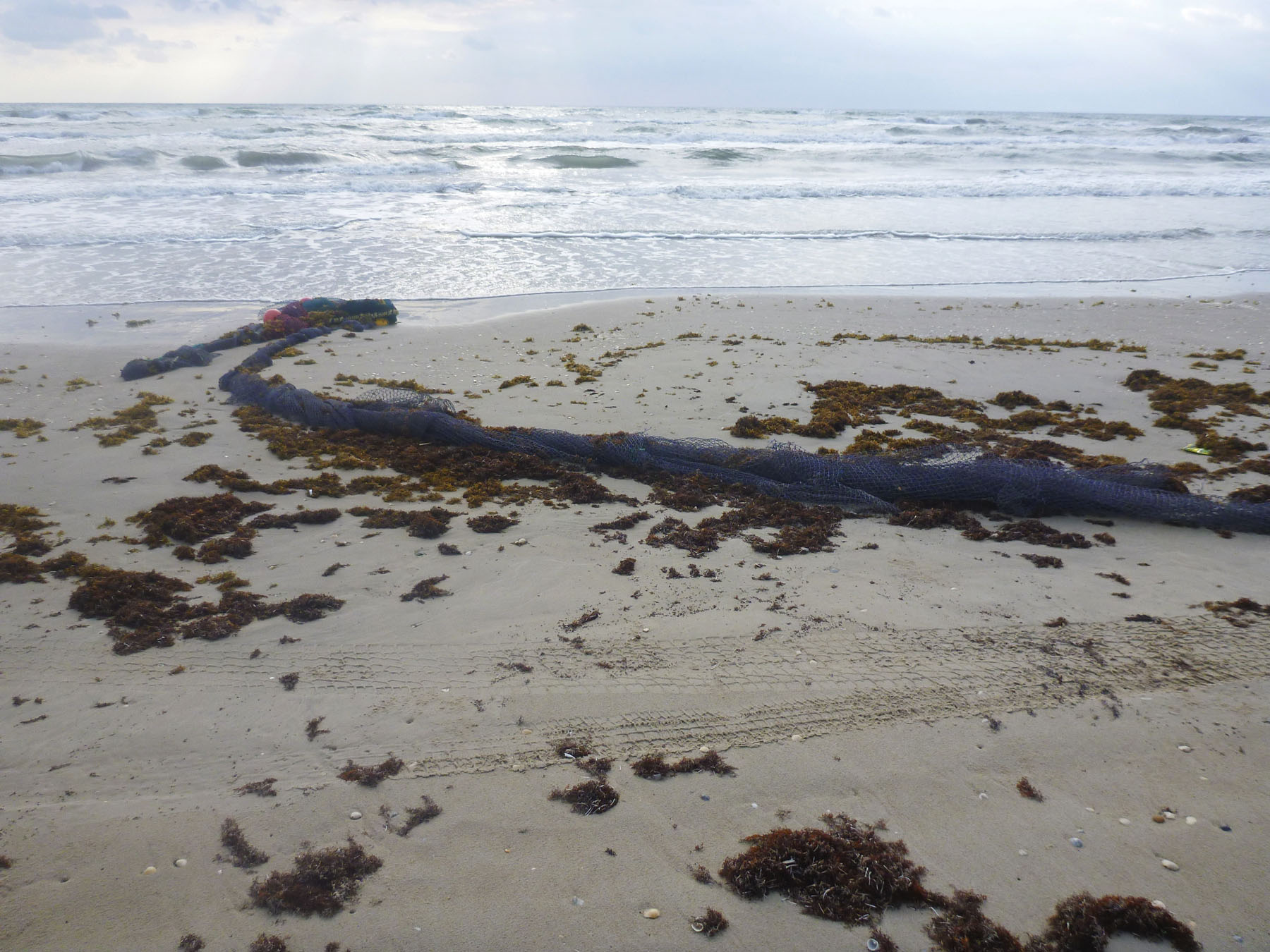 This piece of gill net found on the PINS beach is presumed lost or possibly scuttled by Mexican fishermen working illegally in Texas waters.
The finest fishing of the year in the PINS surf runs generally from mid-August through mid-December. It is a very complicated scenario that depends on the migrations of finger mullet from the bay systems and the arrival of huge shoals of anchovies migrating south as our coastal waters begin to cool. The finger mullet migration usually coincides with the first cold front of the season. High tides accompany this frontal passage and when the water falls out of the bays the finger mullet go with it. So do a great number of our redfish.

Here in 2014, Tropical Storm Dolly raised our water levels in early September and started this movement earlier than normal. Over the years I have observed that the finger mullet will not all migrate at the same time. They'll migrate for a few days but, as temperatures warm, they will stop migrating until we get another cold front and corresponding drop in water temperature. This will create gaps in the surf where there are no mullet for 10 or perhaps even 20 miles while areas to the north and south will have high numbers of them.

So obviously, the serious angler will target the stretches of beach holding the greatest numbers of mullet. The perfect scenario is to find a nearshore gut that is holding a lot of mullet that are not just passing through the area but holding up in that area for some time. These areas are also prone to be holding good numbers of redfish.

Even with all the high-dollar lures on the market, and including the option of using live or cut bait, day in and day out it's hard to find anything more productive than a 3/4 ounce gold or silver Johnson Sprite spoon. If the current is excessive, step up to a 1-1/8 ounce Tony Accetta spoon in gold or silver. If I could have only one lure it would be a 3/4 ounce silver Johnson Sprite.

We all know how quickly spoons will corrode, turn green, or get all the "shine" rubbed off them shuffling around in tackle trays. Well, there are actually some things you can do to avoid that or at least postpone it for some time. One trick is to install pieces of sticky-backed foam in you your tackle trays so your lures aren't directly rubbing against the plastic boxes. Another is to apply Blakemore Real Magic or something similar after using them. There is also a very handy product called The Works Disinfectant Toilet Bowl Cleaner that makes old spoons shine like new. It works on reel chrome and all kinds of metal but it is very caustic and I recommend using chemical resistant gloves when applying it and always rinse whatever you are cleaning very well to stop the chemical action. When my spoons finally reach the over the hill category I keep them for jetty and skipjack fishing.

At the same time the finger mullet begin their massive annual migration and redfish are in high numbers, the 10-30 pound jack crevalle begin to come into the surf every morning to fuel up for their own migrations on the abundant finger mullet. Early in the season they are only there for a couple of hours every morning. Then they'll start making a morning invasion of the beach, pull out in the middle of the day, and make a return about 4:00 PM and feed until dark. But these afternoon jacks can be scattered and unreliable. Then late in the fall they will be present most of the day and one day the surf is solid jack crevalle from daylight until dark. The next morning they are gone for the season.

Dusky and bay anchovies move up the Texas coast around Memorial Day and spend the summer in the area of the mouth of the Mississippi River. They are usually offshore of Port O'Connor by July and are back in our area by early August. The movement of tarpon schools along our coast tends to coincide closely with the anchovies, which is one of their favorite food sources. Numbers of tarpon and anchovies tend to peak in our area around the end of September.

The anchovies often become numerous enough to form huge black and wine-colored bait balls. At the same time, various species of fish-eating birds are moving through our area from their northern nesting grounds to southern winter ranges. There will be days when nearly three-quarters of a million birds will be feeding along the PINS beaches. Ladyfish (skipjacks) follow, also feeding on the anchovies, and are joined by Spanish mackerel and Atlantic bluefish. Large areas of water will be boiling-white with predators feeding on the anchovies.

Sharks are attracted to this activity and at times schools of them are observed feeding very shallow with their tails and dorsal fins exposed. As temperatures rise this activity slacks off and then right behind the next norther it will resume. This pattern is repeated over and over through the fall until winter moves in and all of the fish and birds have moved on. As each cold front moves through it will make conditions unfishable for a day or two. It is the lull in between the cold fronts that allow for the best fishing of the year. Obviously, as the windows between cold fronts become shorter, so do the days of great fishing potential. It's all about timing your trip during the most user-friendly periods. If you are determined to do an overnight fishing trip when a norther comes through you are dooming your fishing chances and are in for lots of misery to boot.

Making a trip this time of year requires careful planning. An almost overwhelming aspect of late-fall surf fishing is that there are so many options available and you simply cannot do all of them. Although conditions are great for camping and this naturally leads to fishing within a specific area, running and gunning will increase your chances of success for tarpon, jacks and reds. You are at least going to have to scout the entire beach once or you'll never know what may have been available just a couple of miles away.

My game plan rarely changes. We head south, stopping when we like, but planning to make careful observations all the way to the Port Mansfield jetties. We then turn around and fish all the prime spots noted on the way back north. That's the best plan I have been able to come up with that makes the most of a single-day trip. There are days when we find so much activity that we never get anywhere near the jetties. But when the fishing is that good, who cares?

At any rate, you are going to have to prioritize your list of species to be targeted on any given trip. And you need to have appropriate tackle prepared in advance to make the most of the opportunities. Just imagine driving up on forty tarpon free-jumping and busting bait balls at the edge of the sand and not having a single outfit rigged to throw at them.

Each species tends to have its own small time frame of greatest availability. Stay updated on what's happening on the beach and you'll pretty much know when to go for which species. Beach updates are available at www.FriendsofPadre.com. Fall is a real hoot, get you some of it.

If we don't leave any there won't be any! -Billy Sandifer