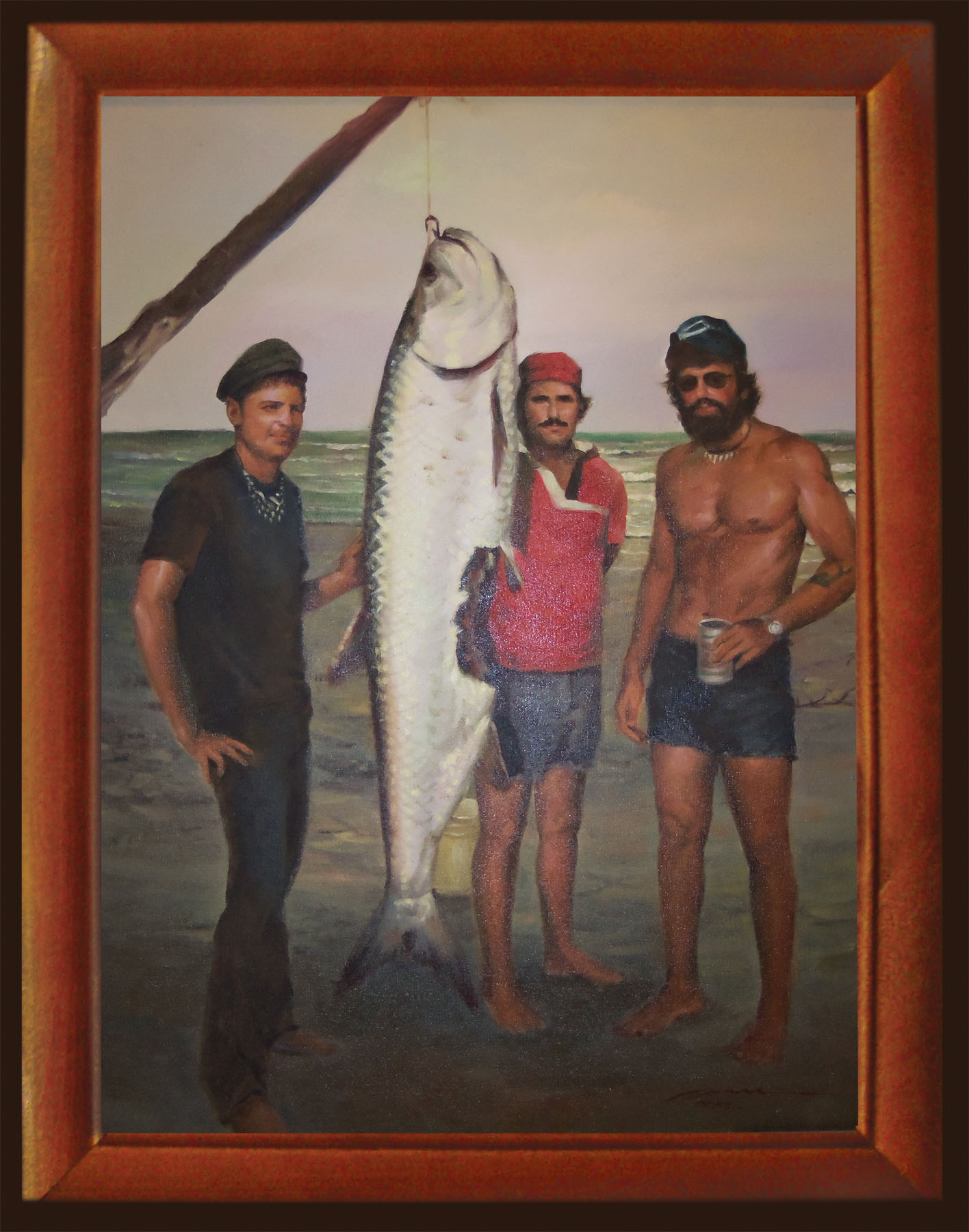 That’s me on the left, Van next to the tarpon, and Len on the right.

The faces on the canvas haunt me every time I look at it and they have done so these many years. It hangs on the wall five feet from me just to the right of my desk. I love to tease everyone about telling the same ol' fish story over and over instead of just catching it once and then getting busy catching another and bigger one. But this fish picture is different and although there is a tarpon nearly seven feet long with two shark bites out of its belly I realize that the emotions I feel aren't about catching the fish at all. Instead they are about the men in the picture and companionship. The memory of that event floods through me and takes me back and reminds me that the experience far outweighs the catching of a fish.

Len Decker was my best friend and fishing partner for some eighteen years. By profession he was a side-boom operator on international cross country pipe lines and he often worked for a general superintendent named Van Wyatt. Van lived in Houston and fished with us often between jobs. As time went on the two of them bought a house at Sea Isles on Galveston. I'd go up there now and then and we'd fish off the beach at the cedars north of San Luis Pass. We were enjoying such a trip in August of 1980.

There were no molded polyethylene kayaks back then and one-man vinyl life rafts were used to deploy shark baits. Van was making pretty good money and had just bought an eight foot Boston Whaler inflatable with a five horsepower rice grinder on it; so we were really styling. It was hot and still and shark fishing was as slow as it gets. There was a sandbar about a half mile offshore of San Luis Pass and every now and then we noticed something really big exploding on the surface, sending big mullet fleeing in every direction. I thought it must have been tarpon so I made up some heavy mono leaders, caught some nice ten inch mullet with the cast net, and had Van tie on a leader and get in the inflatable with me.

Slow trolling the area with live mullet, Van and I both got solid strikes and then cut off immediately. To this day I still don't know why. After this happened several times I told Van we needed to try some #12 single strand wire leader and I returned to shore to make the leaders and net more mullet. Len was going nuts sitting on the beach watching us and there wasn't room for three people in that little boat so Van told Len to go with me and he'd watch a while. It was mid afternoon and I hadn't paid any attention to the rod and reel Len had brought until we were a good ways offshore. I had never seen it before and it was really some low-rent equipment and I asked if he'd found it on the side of the road or at a flea market. We were bantering back and forth when the rod bent over and the reel began to unwind.

A large tarpon broke the surface but never fully jumped. This fish was a runner, not a jumper; and man did it ever kick in the afterburners. Len's reel was about the size of a Penn 209 and when I asked he said it had 30# test mono on it so I gave chase with the inflatable to keep the fish from stripping the reel. I think that reel had less than 20 turns of line on it for the next few hours.

The tarpon never wavered but headed straight offshore ALL afternoon. He rolled regularly and it made it easier for me to follow him but we could not gain any line. The winds and seas picked up to the point it was rough and I realized I was tired from constantly fighting that tiller in the growing seas but Len was in worse shape as the seas kept knocking him off the bucket he was sitting on and he was all wadded up in the bow hanging onto that rod for dear life.

I had been intently watching his line and the fish all afternoon and I was stunned to see how low on the horizon the sun was when I finally looked behind us. But that wasn't near as stunning as the fact I could see no sign of the shore whatsoever and by starring intently I could barely make out a very thin pencil line just above the horizon and I knew that had to be the San Luis Bridge. We had to be at least eight miles offshore. Also of importance was the fact the swells had soaked all our cigarettes early on and we were out of beer. I picked up the small fuel tank we were using and shook it, I could tell instantly that our remaining fuel would have probably fit in a coffee cup.

Len had never had the chance to catch a big tarpon before and as bad as I hated it I advised him of our choices. If we ran out of fuel after dark there was no telling where or how far offshore we would be by daylight. If the wind didn't change we could get out of the inflatable in the dark and swim it in the direction we thought shore lay but it would take many hours and was dangerous as hell. We had neither food nor drink with us. We had less than an hour of light remaining. He either had to lock down the drag on that hunk of junk reel and bring the fish to the inflatable or crank the inflatable to the fish - or break his line trying. As gently as I could, I told him the only other option was for me to cut his line and that seemed to rejuvenate him although he was bone-tired and I could see his arms shaking from the strain as he pulled back hard, then lowering the rod and cranking line over and over. I still don't know if he pulled the inflatable to the tarpon or the tarpon to the inflatable but, just as the sun was setting it came alongside, fully exhausted from the long battle.

The only landing device we had was a homemade gaff about two feet long. The tarpon was wrapped in the leader and I had my hands on it freeing the line from its gill slits when the toothy, smiling face of what looked like an eight foot bull shark appeared and it instantly bit a chunk out of the tarpon's belly. The tarpon went straight up and down in the water and with me holding the leader it feebly made its way to the stern where the bull shark struck it again and the leader wrapped around the lower unit of our outboard.

The sea was so rough I could barely stand but I raised the lower unit and unwrapped the leader while the shark chewed away on the tarpon. Freeing the tarpon I dragged it back amidships and Len kept hollering, "Gaff him! Gaff him!"

With all my remaining strength I bellowed back, "Which one you want me to gaff Len, the tarpon or the bull shark that's eating it?"

There was a lot of water in the inflatable and the fading light had almost disappeared when I said to hell with it and pulled the tarpon's head into the boat. Then I struck as far down the tarpon's flank as I could reach with the gaff and hollered for Len to help as it was more weight than I could handle. We took on a lot of water as we pulled the tarpon into the inflatable and the boat tilted way over on its starboard side before righting itself, and the whole time I wondered if that eight foot bull was going to come right on in the boat with the tarpon. Thankfully it had disappeared.

We were too exhausted to speak. I said a little prayer when I pulled the starter cord on that outboard and it instantly roared to life. It was fully dark now and I kept the outboard at minimum speed to conserve our tiny bit of fuel and let the following sea push us shoreward. After some time we could faintly see the lights of the bridge and laughed and clapped hands. Then, with us being who we were, the last fifty yards to camp I goosed it and came in like it was just another day in paradise.

Van Wyatt was concerned for us since he had better sense than we did and gleefully ran out with a lantern to help us beach the inflatable. I remember him going on and on about what a huge fish and great catch it was by anyone's standards - but of course with Len and me being ol' salts we couldn't let on it was anything extraordinary. I remember Len couldn't stop laughing and I remember him saying, "Yes sir, now that was the real deal." Talk about a hoot!

Len has been dead many years now and I shook his ashes at the 25 mile beach on PINS. Van Wyatt is living in Harlingen when he's not chasing pipelines and I hope to visit him soon. This article is for you, Van. Every time I look at that painting it instantly reminds me of adventures shared and friendships that can never be forgotten.

Mark your calendar for the Big Shell Beach Cleanup - 25 February 2012.