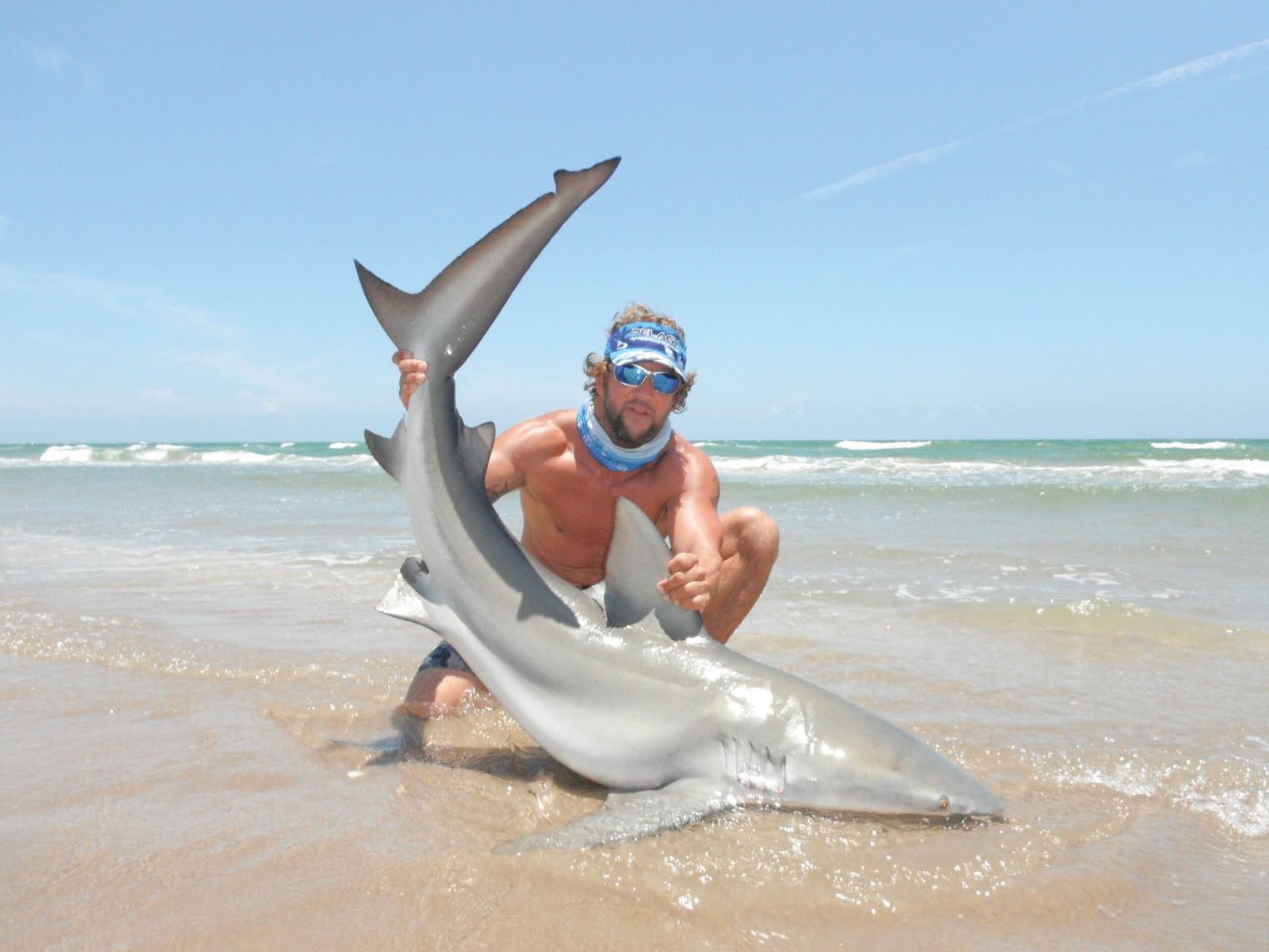 Another 6’-2” bull shark. This one a female, caught and released by James Clark in the PINS surf.

I never for one split second of my life dreamed that Id live to be this old or ever retire. Quite simply I never had any desire to do either. I figured on dropping over dead while kayaking a shark bait through the surf or at the least on a charter down island. I secretly thought it would be a nice touch to keel over dead picking up trash at a Big Shell Beach Cleanup.

Ive intentionally spent this adrenalin-filled adventure we call life in such a manner that left little doubt I would have to ever worry about getting old. All my life people have asked me, Billy, arent you afraid of anything?

Ive always replied with the same one liner; Sure, Im scared to death of getting old.

Theyd have a good laugh and say they doubted Id ever have that problem.

Ive lived each day as if it were my last one and done my best to savor all of its sweet nectar like a hummingbird on one of the last flower blooms of fall. All of our lives are comprised of a certain number of days and the number doesnt matter; the way we spend them does.

So then I end up with swollen ankles, feet and legs for twenty-six straight days last June. The V.A. diagnosed the problem as bilateral peripheral vascular disease of both lower legs due to Diabetes Mellitus Type II, associated with being sprayed with Agent Orange. An internet search suggested I shouldnt worry too much about making long-term investments.

Between that and PTSD they declared me 90% disabled due to service-connected combat-related health and mental health issues and they pay me for 100% disability as I am considered unemployable. The money is wonderful but it was as if they had stolen my life. I spent months in misery and depression attempting to come to terms with this. I was like a boat that had slipped its anchor and was aimlessly drifting around at sea. I seriously considered moving to Panama or somewhere I might find a new mission and an adrenalin fix.

The Board of Directors of the Ruth Parr Sparks Foundation is made up of Mr. Leon McNinch of Alice, TX. and Mr. Jim Mayo of Mathis. Their contributions have been the lifeblood of the nonprofit group Steven Naylor and I started and named Friends of Padre, Inc. In July I took Mr. Mayo, his lady-friend, Glenda, and two of his business partners on a sightseeing trip down island. He was shocked to learn I had only been down island a few days this year. I told him that since I no longer had customers to pay for the fuel I couldnt justify going regularly which was new to me as all these years Ive attempted to scout the entire beach at least once every week.

I always thought of it as riding fence on a ranch. Mr. Mayo advised me he thought the Friends of Padre was affording me a gas and vehicle repair allowance because as far as they were concerned the main job of Friends of Padre, other than to carry out the Big Shell Beach Cleanup, was to be supportive of my other personal conservation work which definitely included me riding fence on PINS once a week.

It was then that I realized the board of Friends of Padres (including me) had became so focused on evaluating good causes we felt worthy of donations we had neglected to realize that the conservation work Ive been doing all these years is of extreme value and needed to be continued and supported from our donated funds as well. All at once I wasnt old and worn out anymore; instead I was a man with a mission. The same mission Ive been performing continuously since leaving the military; riding fence on PINS, collecting natural science data and reporting necessary and important information of things I observed to the appropriate NPS personnel.

For the first time I was glad my professional guiding career was over and I could go back to immersing myself within that ecosystem I knew so well and enjoyed studying, experimenting and monitoring all the flora and fauna of the island and nearshore waters

So the Friends of Padre did some prioritizing and purchased some top quality optics and other tools necessary to be good guardians of the island and all its children. We are in the process of having our website rebuilt to include a blog that will give reports and other information folks need to know. Check out our website at www.FriendsofPadre, Inc. and when you choose to make a donation to Friends of Padre youll be directly supporting conservation programs on PINS which could, in future years, be extremely influential in keeping driving permitted on PINS.

Ive invested a lifetime in trying to protect Padre Island, its inhabitants and the rights of its visitors. Hard to retire with no one to keep the flame alive. Now I want to introduce Jeff Wolda.

Jeff is 42 years old, a nine year veteran of the U.S. Navy and has been fishing on PINS both with me as well as on his own for years. In a few days Jeff will become the new light-tackle fishing guide on PINS and maybe my poor ol telephone will get a break. I recently went to PINS with him and told NPS personnel he was my recommendation for becoming a guide. He has been one of our section leaders in the past few Big Shell Beach Cleanups and is a straight shooter. I recommend him to you just as I did with NPS personnel.

Jeff is the man to take up the torch Ive laid down and by hiring him you will help add an additional set of eyes and hands to those already riding fence down island. His phone number is 361-215-8400 and his web site is PI-Adventures.com. Jeff will not be doing shark fishing trips for now; other than sightcasting to shallow water individuals he encounters. Supposedly another individual will be doing shark fishing charters but I havent a clue as to when he will start. The guide on PINS is the representative of all PINS users and its good to know its a man of integrity, honesty and grit.

Ive had something on my mind for some time now but seems I never have space to write about it in an article. For a few years we all had CB radios in our vehicles down the beach and kept them on Channel 1. Lots of good came from that. Stranded turtles or sea mammals can be promptly reported as well as accidents or injured people. You can also find out what color the water is 30 miles south of you without having to drive 60 miles round trip only to find it is of poor visibility and to learn that the jack crevalle are at that very moment hitting the beach at the 28-mile beachfront.

CB radios cannot get all the way out but we can pass info along the beachfront to someone who could make an emergency phone call when needed. Its a win/win for everyone and probably half of us still have one around somewhere. Im reinstalling mine in my Suburban. Think about it. Its a good deal for lots of reasons.

If we dont leave any there wont be any! Billy Sandifer