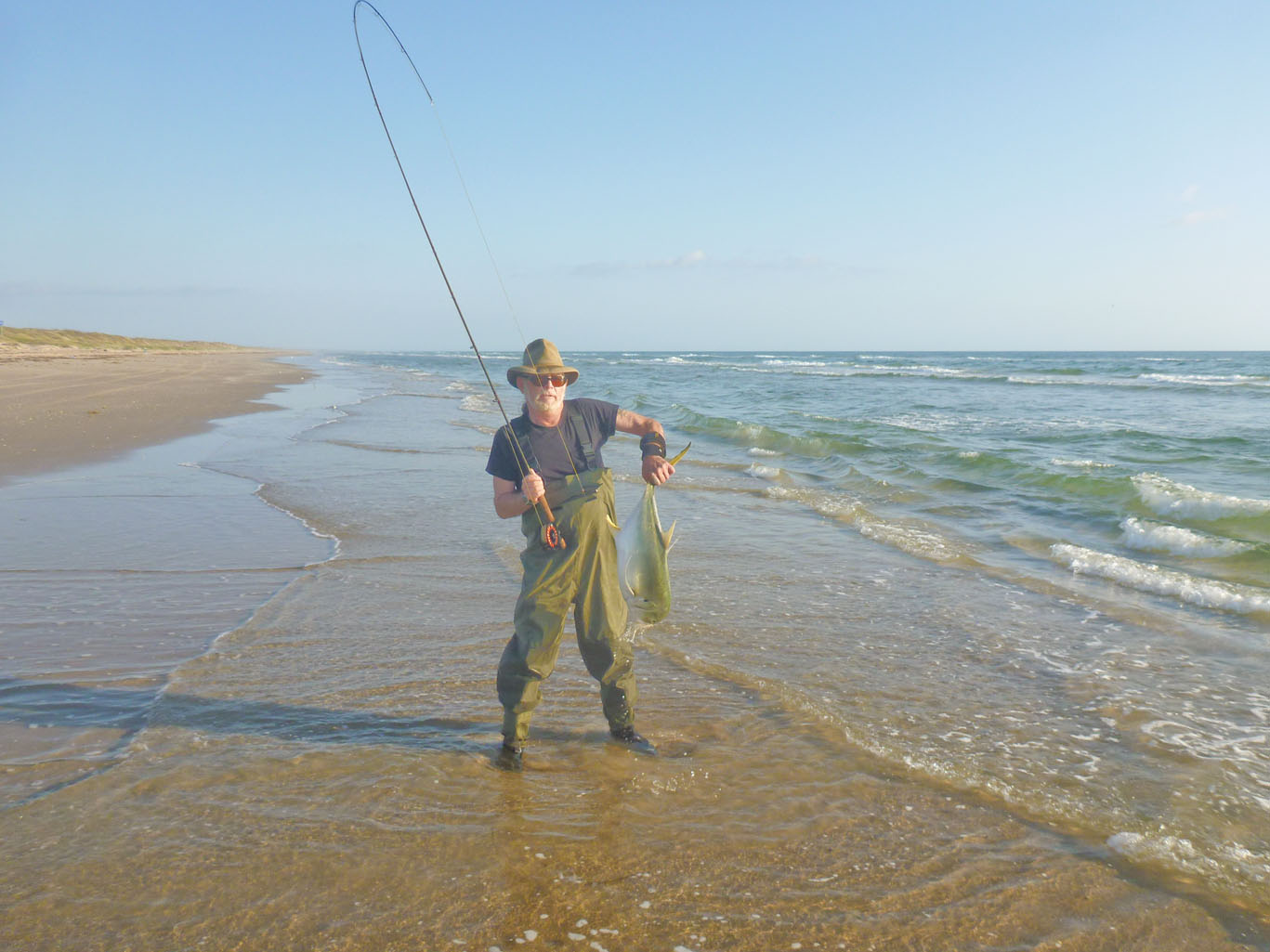 Author Billy with one of 3 jacks caught in 7 casts on fly rod.

The finger mullet migration from the bay systems to the surf is not a mass movement that occurs in one day or even a number of days, although at times there are so many of them it seems all of them are migrating at once. In reality, behind each drop in temperature and each cold frontal passage, a certain number will move into the surf and head south. Then as the temperatures increase as the norther passes through, the migration will temporarily slow or stop completely until the next front again blows the water out of the bays and drops the temperatures and then more will migrate. This scenario is repeated over and over from September through December.

Redfish will follow the mullet out of the bay systems and jack crevalle and other species of fish will come inshore to feed on them as well. This is the heart of the wonderful fall fishing we experience. Overall, this has been a tedious year for surf fishermen and good catching has been extremely sporadic throughout the year although some good catches have been made. With the weather remaining unusually hot this year weve really gone straight from summer to winter with almost no fall season at all.

Everyone knows what golden or Atlantic croaker are but there is a close kin most folks are actually unaware of. Its known by various names including butter croaker, Norfolk spot or simply spot and is commonly mistaken for croaker. They have more of a yellowish tint, their bodies are a bit wider, they lack the barbells croaker have and their mouths are lower. Their skin is also smoother and softer to the touch due to their having smaller, smoother scales. They live in the grassy flats in good numbers and at some point each fall they migrate out of the bays into the surf in one big mass. Millions of them can be seen migrating at the same time and if youre lucky enough to be there when this happens I assure you that you will never forget it.

I remember the first time I ever made a trip down to Boca Chica back in 1970. We stopped at the Last Chance grocery store to pick up supplies. I asked the old salt behind the counter what the best time was to go shark fishing down there. He grunted and said, When the croaker run. Theres always sharks but they go absolutely nuts when the croaker run. I had never seen a visible croaker run in the surf and was surprised by his answer but, I never forgot it.

The mullet have been trickling through in varying numbers for quite some time now. Likewise the catching has been very hit and miss. One day Jeff Woldas customers had over 50 reds and a few days later there were none.

On October 31, I caught three jack crevalle in seven casts with a fly rod and then they disappeared for a time. But one could see catching was slowly but steadily improving when conditions allowed. Those among you who have not yet had the opportunity to experience the Perfect Day probably get awful tired of hearing your buddies reliving them all the time. Its not really their fault as they are permanently seared into our minds. The Perfect Day; that illusive day when the moon and stars line up perfectly and the barometric pressure is equally perfect, and light wind blows over crystal clear surf. Most Important there are untold millions of hand-sized spot and some croakers beaching themselves in a desperate attempt to escape massive numbers of predators of numerous species following them into mere inches of water.

I was taking Mrs. Wanda Wilson and Peggy Bull pompano fishing on November 15 when we came upon twelve solid miles of jack crevalle, sharks, and I am sure plenty of other species that remained unseen stretching from the 30 to the 42 mile beach front. Black shadows up to eight feet long filled the water for the entire distance. Large explosions of white water were unending. In one spot we saw eight bull sharks up to eight feet long in one bunch. Ive been lucky enough to have seen this phenomenal event any number of times but regardless of how many times I see it; it remains a spectacle that fills me with wonder and awe.

We were not seeking these large game fish and did not even have tackle with us that would have handled them; our target was pompano. In a way this actually made it more enjoyable as we could just drive along and enjoy the show. Spots were beaching themselves all along the beach and I saw one twenty-five pound jack crevalle skid up onto bare sand and flop around momentarily before a wave helped it return to the sea. When we returned north in the afternoon there were dead spot lying all along the surf line that had gotten stranded and died on the beach.

We continued driving south of this killing field stretch of beach and found a location far to the south that provided a dozen beautiful pompano. I never put the truck in 4-wheel drive. The driving was as good as the fishing.

The fishing had gradually become increasingly productive over a two week period but was not truly dependable until that day. And then it all came together and peaked. By the following day the winds had increased as the next cold front pushed south across the plains. A one day window of opportunity well never forget.

My pal from Wisconsin, Vern Foreman, had been keeping track of the fishing through me and wanted to come down for a few days of shark fishing when it got good. When I told him wed just had the best day Id seen fishing in over five years he was ecstatic and said he was coming to fish. I told him to hold off as we had a serious cold front due on the day he would arrive in Texas. No way; he was coming.

Well he got lost in Austin and the norther beat him to the coast by twelve hours. With fishing in eight foot seas totally out of the question I took pity on him and, against my better judgment, I took him riding fence so hed at least get to see the beach. Tides were absolutely horrible, driving was brutal, and a limb slammed into my exhaust system and did $125 damage.

The Perfect Day was the second behind a light cold front with calm conditions. Verns trip 3 days later was in the middle of a full-blown norther. Its really that simple. Ive been telling you for years to go the second day behind a norther but it must have calmed. Verns trip was doomed from the onset because of his decision to ignore the norther. One trip down island during these high tide and windy conditions do more damage to your vehicle and tackle than twenty average trips do. I expect good fishing behind the current norther but also expect it to be waning in general as I believe everything peaked on November 15.

Heres wishing you and yours a perfect day. What a Hoot!

If we dont leave any there wont be any. Billy Sandifer