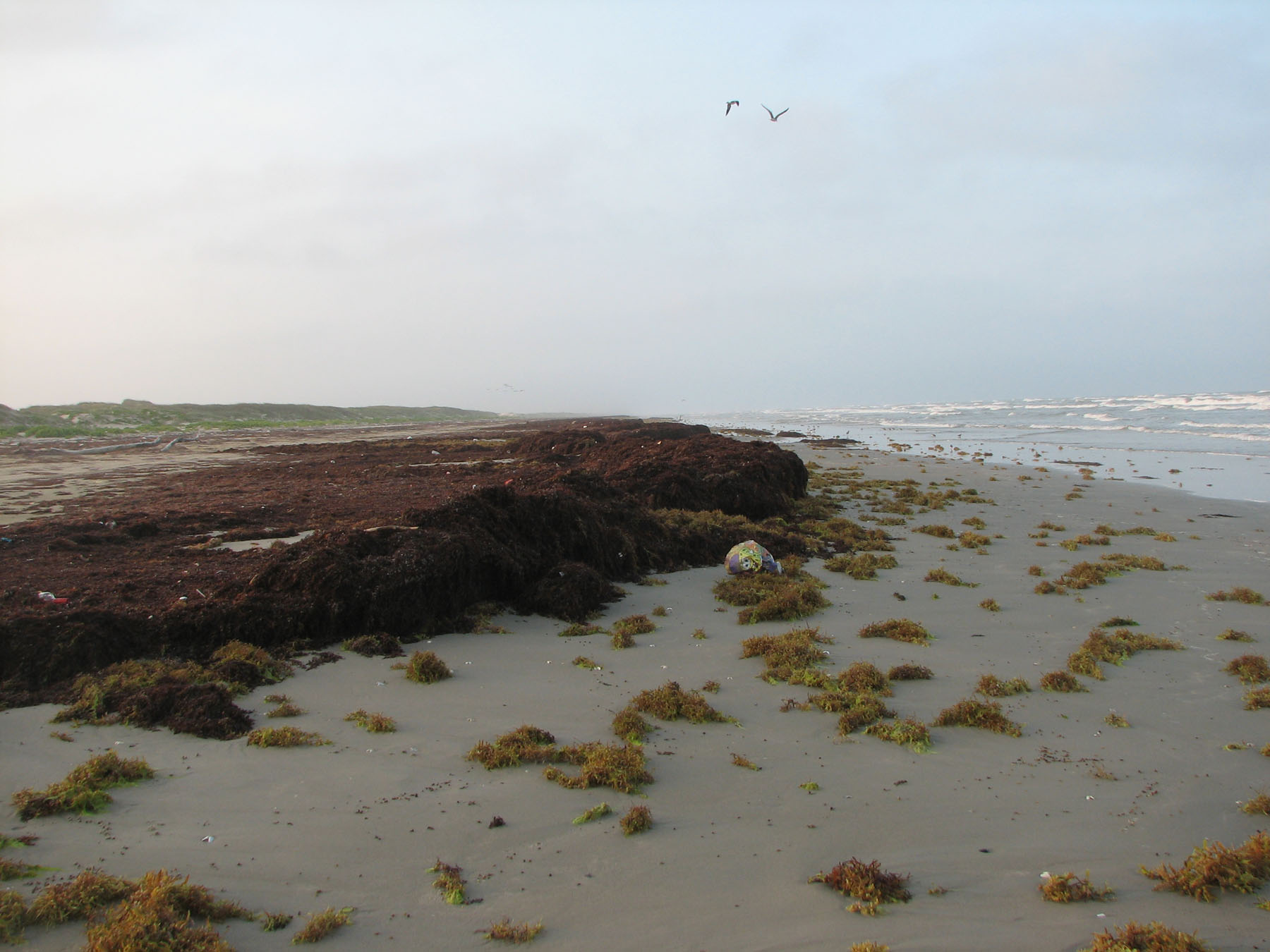 These mounds of sargassum will be decomposing and buried by incoming sand. Beware of sink holes while driving on the beach.

Doesn't take long for a surf fisher to realize that the two major enemies faced each day are the wind and sargassum. The sargassum makes fishing difficult regardless of other conditions, but when you add a 25-knot wind to the equation and the current it generates, fishing becomes totally impossible. Were the current very light, one might hope to find an area clear of weed, but the wind-generated current will move massive amounts of weed along the entire shoreline at a rapid pace. This has been the status of the Padre Island surf for two solid months now.

The Sargassum Sea (also known as Sargasso) lies within the famed Bermuda Triangle in the south-central portion of the North Atlantic Ocean and is the historic home of the seaweed we know as sargassum. Spring currents bring it into the Gulf of Mexico through the Yucatan channel and it pushes northward along the shoreline of the western gulf.

Most of my life we could figure on one or maybe two invasions of the weed every year with each episode lasting for a couple of weeks; then we were clear of it. Starting around the year 2000 all of this changed and surf fishers have been overwhelmed by massive amounts of the hydroid repeatedly impacting the shoreline into the month of June and sometimes even during July.

Starting in the 1950s, marine biologists began observing a "left over" population of sargassum living in the offshore Gulf of Mexico. Then in the 1990s our winters became atypically warm. Normally, the sargassum goes dormant and does not reproduce during the winter months due to the surface temperature of the Gulf of Mexico being too cold. Now with several unusually warm winters in succession, it is reproducing throughout the year and its impact on the surf zone has been on a steady increase.

My bet is that we might as well get used to it. Currently, driving is extremely tedious and bumpy along the entire beachfront of PINS and sargassum is stacked from the water's edge to the dune line. I have hopes that the amount of weed will diminish during May, BUT even if it does we'll be in for some very dangerous driving conditions I need to warn you about.

At present you can drive the beach and find many places where sargassum is stacked three feet deep along the water's edge. As sargassum ceases to wash ashore, this weed will become buried beneath incoming sand and disappear- BUT it is still there and it is decaying. As it decays it will form a deep layer of decomposing organic matter hidden beneath the innocent appearing sand. This makes one of the most effective booby traps that a beach driver can encounter.

You can be driving along the water's edge and every thing appears firm but without warning the vehicle will sink to the frame in this natural, bottomless sinkhole. The only defense I know is to stay in 4-wheel high while driving the shoreline and if you feel the vehicle sinking, put the gas pedal on the floor and stay that way until you have cleared the trap.

Never reduce your speed if you feel your vehicle sinking. When these conditions are present I never drive along the water's edge around a point on the beach. Vast amounts of sargassum are buried there. It is the sargassum which is buried there that has raised the elevation of the beach and created the point. I steer landward of all such points.
There are ways to work minimal and moderate conditions when sargassum is present. I have gone to Mustad Ultra Point Big Gun and Hoodlum 4X strong live bait hooks on many of my artificials. I add a second split ring while changing hooks. So often in the surf heavy trout straighten out the treble hooks that come on most of our lures and countless times we lose tarpon and other larger species that strike a presentation intended for trout and reds due to the treble hooks being a weak link that is too weak in our tackle system. Doesn't seem to hurt the action of the lure, increases the potential of a solid hook up with less hooks to attempt to set, is more fish friendly and greatly decreases the numbers of casts lost to snagged grass.

One can also greatly decrease the amount of grass hooked when using soft plastics on leadhead jigs or bucktailed jigs by running a small rubber band from over the top of the eye to the barb of the hook. The fish knocks it off with no problem when they strike and only the very tip of the point can catch grass.

Last week, in horrible conditions, my customers had two sharks on while we were casting baits from the beach. Walk up-current at a 45% angle in the surf and then cast out. Tighten the drag with the line facing into the wind and current in the rod holder. Grass will ride up the line rather than put a big bow in it and break your sinker free. Incoming grass can be shaken off of removed by hand as it comes up the line. Tough way to do it but it is doable in all but the thickest of grass.

The first nesting Kemp's ridley sea turtle was found on April 23 this year and as of May 1, nineteen more had been discovered. Eleven of these were found on PINS beaches. PINS is one of the two most important nesting locations in the world for this most endangered of marine creatures. The biologists are not only getting data; they are removing the eggs and incubating then in a secure and controlled environment.

Interestingly, the turtle biologists have discovered that they can control the sexes of the babies to be born by keeping the eggs at certain temperatures. As more females to lay eggs are the goal, the temperatures are controlled to produce 70% females. How cool is that?

The Turtle Recovery Program has purchased several UTVs to replace the older ATVs and they look both functional and safer to me. Please watch for nesting turtles and if one is seen call 361-949-8173 ext. 226 or 1-866-TURTLE-5 and report it ASAP. If possible, mark and guard nest sites until a Turtle Patroller can reach the location. Do not intrude too close or do any thing that might interfere with her nesting.

Since I was already receiving inquiries, I asked for and have been given a firm date for next year's Big Shell Cleanup. We are officially scheduled for the second Saturday, March 08 2008. Hopefully, by scheduling it this far in advance it will be possible for more volunteers to arrange to participate. CCA has plans to play a bigger role in future cleanups and they are certainly and whole-heartedly welcome. It's all about stewardship of a wondrous national treasure and any and all conservation-minded individuals and groups are most welcome.

Be Careful, Be Courteous, Be Kind -Capt. Billy L. Sandifer